Madison Eggert-Crowe is a graduate of Drexel University (2010) and is pursuing her Master’s in Public Administration at University of Pennsylvania’s Fels Institute of Government. Scott Gabriel Knowles is associate professor of history at Drexel University. He is the author of The Disaster Experts: Mastering Risk in Modern America (2011) and Imagining Philadelphia: Edmund Bacon and the Future of the City (2009). (Authors’ information current at time of publication.)

After serving in the United States Navy during WWII, Bacon joined the Philadelphia City Planning Commission and became the executive director of the committee in 1949. Earning a national reputation for excellence during the mid-century era of urban renewal, he was featured in Time and Life magazines and was appointed by President Lyndon Johnson to the White House's Conference on Recreation and Natural Beauty.

As the bicentennial approached, Bacon proposed that Philadelphia host a world’s fair to coincide with the 1976 celebration. He envisioned a redevelopment of the city’s waterfronts, a midway closed to automobiles on Chestnut Street, and a tram that would take visitors over the Schuylkill River into Fairmount Park, site of the successful 1876 Centennial. However, due to political and financial disagreements, Bacon’s vision was never realized. The world’s fair idea was scrapped and on the national level, individual celebrations across the country were encouraged. Philadelphia did not become the international stage as Bacon had hoped. 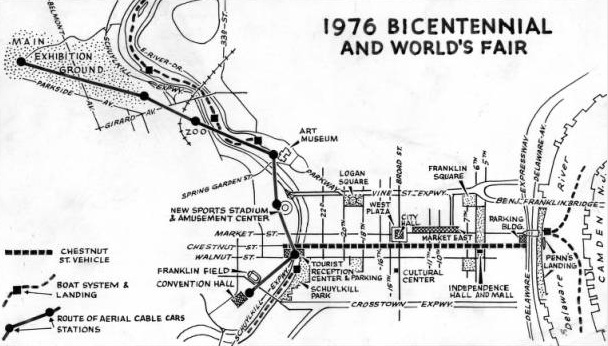 This map, from 1963, shows Ed Bacon’s original plan for the bicentennial celebration, merged with a world’s fair. The main exhibition grounds in Fairmount Park are in the northwest portion of the map, with a boat system and cable car route running along the Schuylkill River to transport visitors. Most of Bacon’s plans were not realized, including a Chestnut Street closed to traffic, running east to west through the center of the city. However, the Vine Street expressway was built in 1964 and Market East Station opened its doors in 1984. 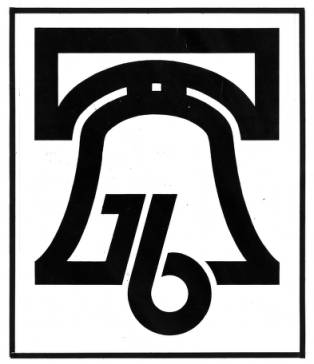 This outline of the Liberty Bell, with the number 76 visibly entwined, is one of the marketing symbols created for Bicentennial celebrations in Philadelphia. The bell was originally forged in 1751, the fiftieth anniversary of William Penn’s 1701 Charter of Privileges. It is largely associated with the Declaration of Independence, however, because it was described as ringing for that occasion in a short story published in the nineteenth century by Philadelphia novelist George Lippard. From that point onward, the Liberty Bell became ingrained in the public memory of the American Revolution, serving as a local symbol of Philadelphia and a larger symbol of national importance—an ideal symbol for the city’s Bicentennial celebration. 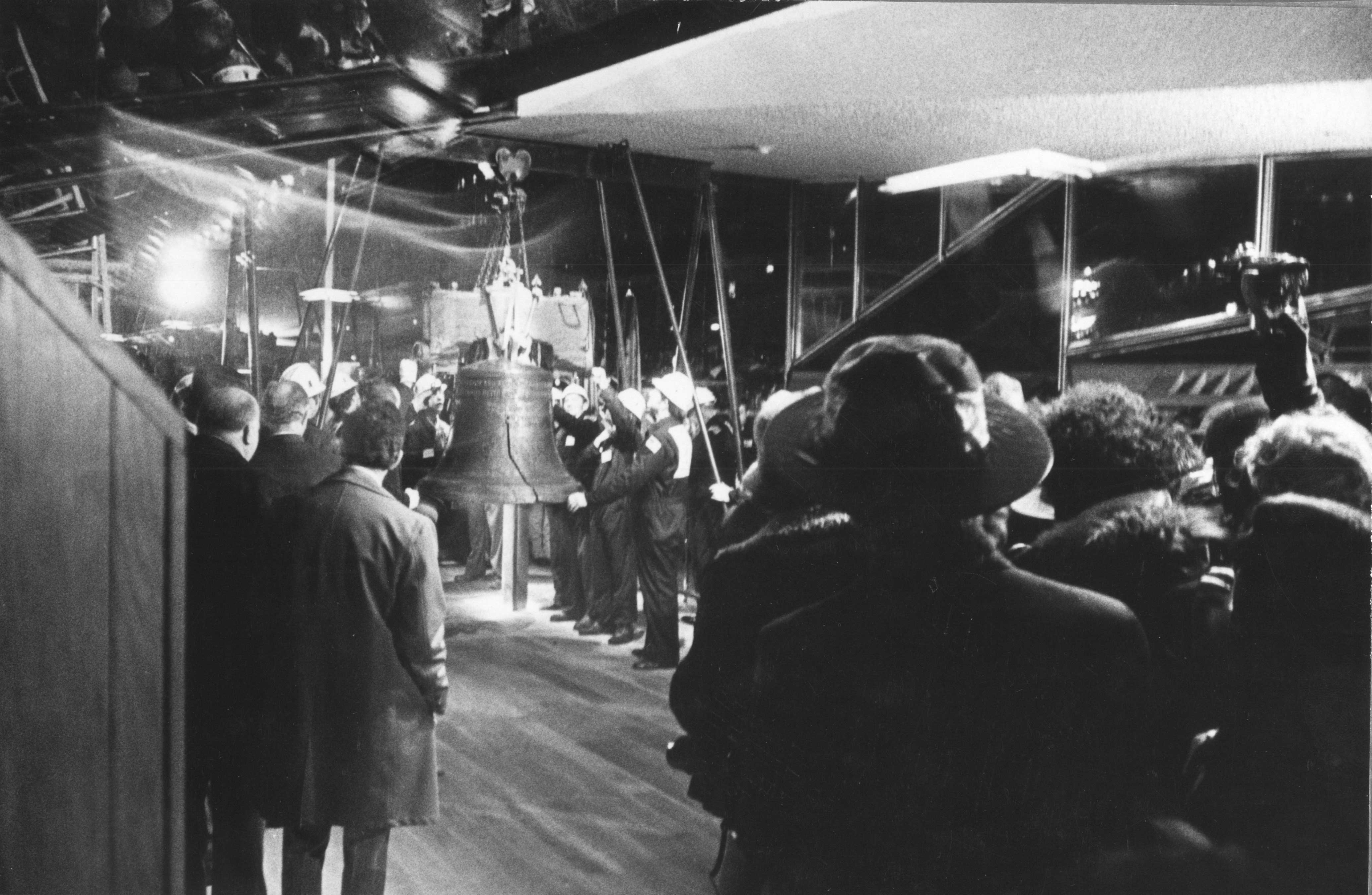 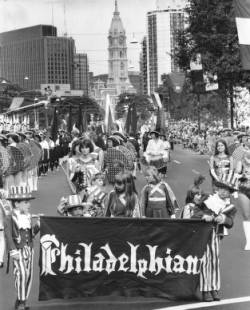 Throughout the country, and especially in Philadelphia, feelings of nostalgia and patriotism soared as the country’s Bicentennial approached. The week leading up to July 4, 1976, was known as “Freedom Week,” and various celebrations took over the city. Protests also occurred in the city, as the July 4th Coalition and Rich Off Our Backs Coalition staged counter demonstrations in Fairmount and Norris Square parks. Pictured here is one celebration, a parade featuring children of all ages, dressed in patriotic outfits and performing for the many onlookers. Freedom Week included street fairs, parades, parties, the burying of a time capsule, and visits from well-known dignitaries and celebrities. President Gerald Ford (1913-2006), Pennsylvania Governor Milton Sharp (1912-1994), Queen Elizabeth II, Prince Phillip, and actor Charlton Heston (1923-2008) all helped to celebrate the nation’s birth. 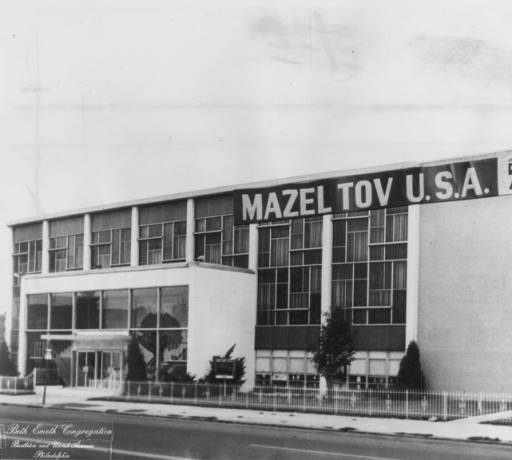 “Mazel Tov “ is a Hebrew expression, generally used to express congratulations or wish good luck. In this photograph, from September 1975, is of the Beth Emeth Congregation, located on Busleton Avenue in Northeast Philadelphia. This sign both congratulates the United States upon its two-hundredth birthday and wishes the country luck going forward, while simultaneously shining a light on the city’s Jewish population. 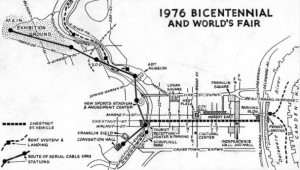 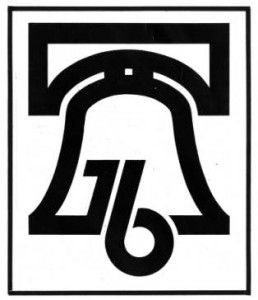 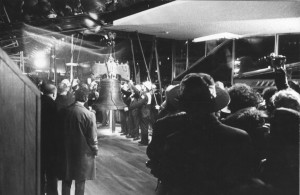 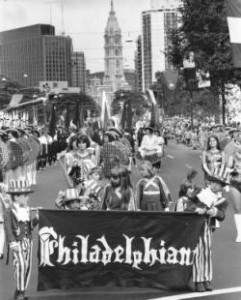 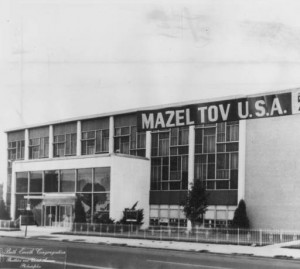