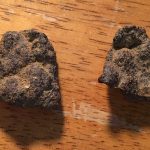 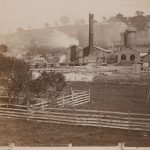 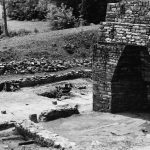 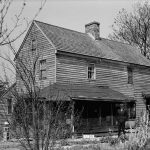 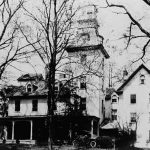 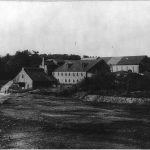 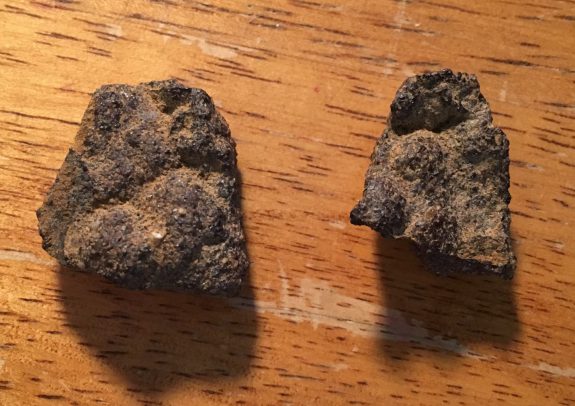 The basis for charcoal-fueled iron production in southern New Jersey was limonite, better known as bog iron. This form of iron was created in a chemical reaction between the tannin-rich waters of the Pine Barrens and underlying iron rich sands and marls. The bog iron ore would rise up to the various creeks, rivers, and lakes of southern New Jersey. Iron forgers could harvest this bog iron ore from the creek and river beds of the region and use it to produce refined iron. (Photograph by Arthur Murphy for The Encyclopedia of Greater Philadelphia) 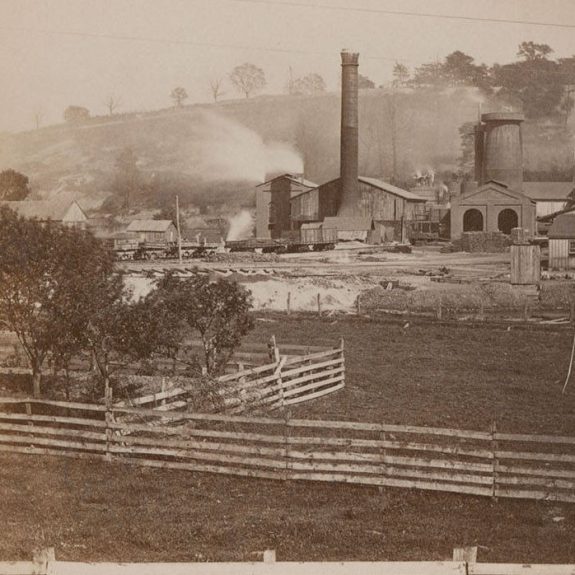 This nineteenth-century cokeworks near Scottsdale, in western Pennsylvania, viewed from a passing train on the Pennsylvania Railroad, processed coke, which is coal from which impurities like ammonia and hydrogen sulphide have been removed by burning it in a low-oxygen environment, a process similar to charcoal making. Because the coking process reduces the ratio of impurities to fuel (for example, carbon), coke burns hotter and weighs less by volume than coal. Cokeworks were often operated onsite at coal mines in western Pennsylvania to reduce transportation costs inherent in a lighter, hotter-burning fuel. 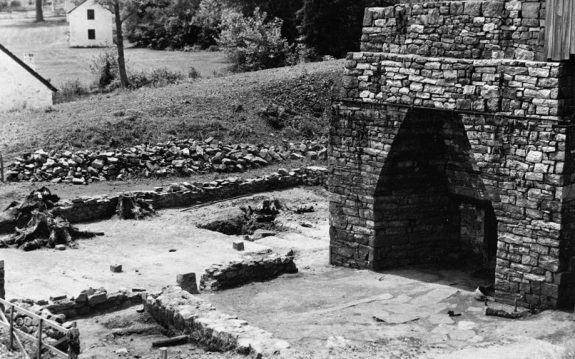 Remains of an Iron Furnace

At Hopewell Furnace National Historic Site in Chester County, Pennsylvania, the remains of an iron furnace call attention to the region's history in iron production. 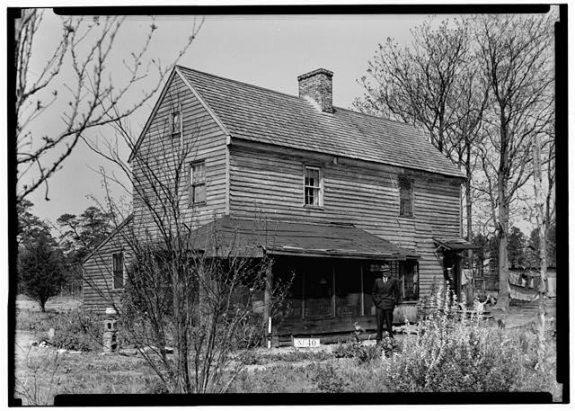 Batsto, like other iron production facilities in the eighteenth and early nineteenth centuries, operated as an iron plantation. Workers who produced iron in the furnace would live near the furnace with their family in houses like the one pictured above. These plantations were self-sufficient communities. Families living on the plantation shopped in company stores, and their children would go to company schools. Batsto maintained this kind of industrial community from 1766 until 1876, when Joseph Wharton bought the no-longer-productive iron plantation in a master’s sale. 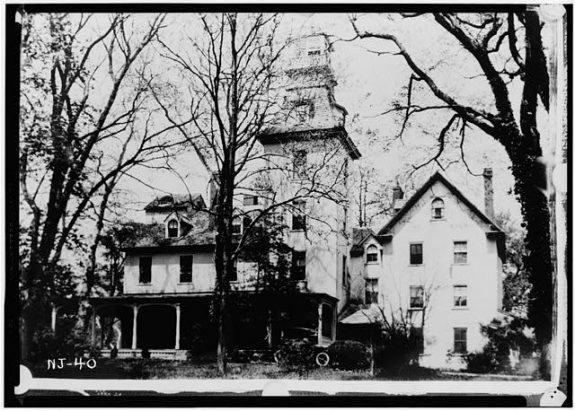 Batsto Village started its life as an ironworks in 1766. Throughout the late eighteenth and into the nineteenth century, Batsto produced iron using readily available bog iron ore in the Pine Barrens region of New Jersey. Batsto, like other iron producers of the era, operated as an iron plantation. The owner of the plantation lived in a manor house (pictured here).

As Batsto depleted its local supply of bog iron, it shifted to producing glass for a time. After its glass production ceased, Joseph Wharton bought Batsto in a master’s sale in 1876. Wharton renovated the former manor house in the Italianate style seen here in the late nineteenth century. Wharton used the large property in the middle of the Pine Barrens to explore his interest in agriculture and forestry-related activities. 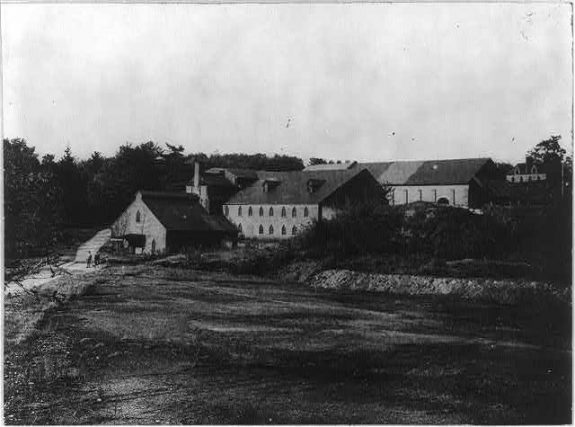 Southern New Jersey and Berks and Lancaster Counties in Pennsylvania grew as iron-forging regions. Furnaces such as the one in this circa 1930s photograph of the old furnace in Cornwall, Pennsylvania, operated as self-sufficient iron plantations. Workers of the forge lived on the plantation with their families, shopped in company stores, and sent their children to company schools. The Cornwall Furnace was originally constructed in 1742 by Patrick Grubb and was renovated in the mid-nineteenth century by the subsequent owners of the furnace. It ceased operation in 1883. Iron furnaces provided the iron necessary to supply the growing economy of Philadelphia with iron for industries such as shipping and household wares manufacturing. 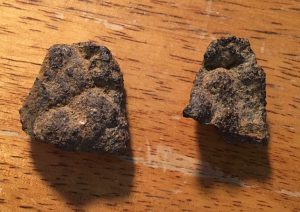 Limonite, better known as bog iron, was the basis for iron production in southern New Jersey. (Photograph by Arthur Murphy for The Encyclopedia of Greater Philadelphia) 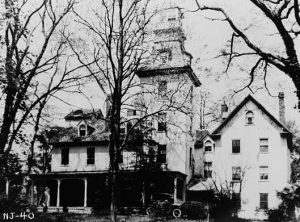 The owner of the Batsto iron plantation, along with the workers, lived on the plantation. When Joseph Wharton, a Philadelphia businessman, bought Batsto in 1876 he renovated the former home of the plantation owner into the Italianate style pictured here. (Library of Congress) 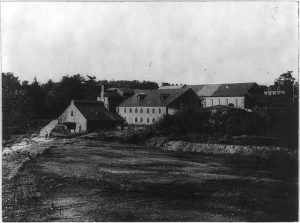 The Cornwall Furnace in Lebanon County, Pennsylvania, pictured here, opened in 1742, continued operation into the mid-nineteenth century, and closed in 1883. (Library of Congress) 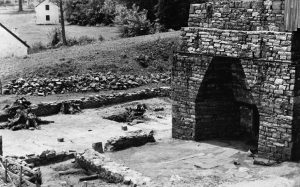 At Hopewell Furnace National Historic Site in Chester County, Pennsylvania, the remains of an iron furnace call attention to the region’s history in iron production. (Library of Congress)

Brian Albright is a graduate of Rutgers University-Camden and Senior Historian at engineering firm AECOM in Burlington, New Jersey. His interests include the industrial, labor, and social history of Philadelphia in the nineteenth and early-twentieth centuries and the environmental history of the mid-Atlantic region.

Mulholland, James A. A History of Metals in Colonial America. Alabama: University of Alabama Press, 1981.

Pennsylvania Society of the Colonial Dames of America. Forges and Furnaces in the Province of Pennsylvania. Philadelphia, 1914.