Since its founding, Philadelphia has acted as a commercial hub for the surrounding region, its hinterlands. Although New Jersey and Delaware had European settlers before Philadelphia’s establishment in 1682, Pennsylvania and its founding city quickly became the focus of economic activity in the region extending both east and west of the Delaware River. With an advantageous location, Philadelphia acted as the region’s principal port, allowing goods from Great Britain, the West Indies, and elsewhere to flow in and serving as a gathering point for produce to be exported. From the late seventeenth through the eighteenth century, Philadelphia’s hinterlands grew in size and diversification of products, but as the region developed, other commercial hubs developed to support and rival Philadelphia.

The Delaware River Valley was originally populated by the Lenape, or Delaware, people, who shaped the region’s initial economic activity. Throughout the seventeenth century, the Lenapes retained a strong presence in the river valley, and the various native and European groups generally worked with each other through trade and negotiated rights and privileges. Native American trails became the earliest paths for the colonists, aiding travel, communication, and commerce into the densely forested hinterland. During this early period, Europeans tapped into the preexisting fur trade before developing their own settlements inland. The territory that later became the state of Delaware was first colonized in 1638 by the Swedish, who adopted a plantation pattern in an attempt to emulate Virginia’s success with tobacco. However, these settlements were underpopulated, of limited profitability, and experienced conflicts with the local Lenape groups. From 1676 through 1702, New Jersey was divided by a line running from the northwest to the southeast, creating the distinct provinces of East and West New Jersey. West New Jersey was administered by a group of wealthy Quakers, including William Penn (1644–1718), but it was sparsely populated and had no major cities of its own.

After the founding of Philadelphia in 1682, the region’s producers saw the new city as a natural commercial center for the Delaware River. William Penn (1644-1718), founder and first proprietor of Pennsylvania, selected a site near the confluence of the Schuylkill and Delaware Rivers to better facilitate shipping. Pennsylvania grew quickly during the five decades before the American Revolution, adding eight inland counties to the original counties huddled by the river (Bucks, Philadelphia, Chester, and the lower counties that later became Delaware). Immigrants—free, indentured, or enslaved—strengthened the hinterlands’ connection to the burgeoning urban center as they spread through the countryside. In addition to Quakers and other English colonists, Pennsylvania attracted Scots-Irish, Germans (including the “Pennsylvania Dutch”), and dissenting religious groups.

At first, in the late seventeenth and early eighteenth centuries, Philadelphia primarily exported raw farm products and timber from these homesteads of the fertile Delaware River valley lands, and the numerous creeks and rivers served as transportation routes for the goods. In the eighteenth century, the European colonists developed their own settlements in the hinterland areas. Timber resources allowed for a vigorous shipbuilding enterprise. The plantations of Delaware Bay moved away from tobacco to more diversified farm products such as meat, grain, and timber. The population boomed from migration from the Chesapeake Bay region and immigration abroad, though the towns and cities that grew remained satellites of Philadelphia.

By 1750, increasing grain production made Philadelphia’s hinterland the breadbasket of the British Empire. The new emphasis led to an increase in flour mills for processing the grain. Mills of various kinds operated throughout the hinterland but had the highest concentration and outputs in Pennsylvania and northern Delaware, where fertile lands combined with strong streams for waterpower to facilitate the milling of grain. Likewise, iron production and its attendant forges and foundries grew during the same period, primarily in Berks and Lancaster Counties in Pennsylvania and in western New Jersey.

Supplies of timber, flour, iron, and similar stores made Philadelphia an important provider of war materials during the colonial wars. However, the Seven Years’ War (1754-63), which erupted from conflicts in far western Pennsylvania, interfered with trade. In Pennsylvania specifically, it created conflicts over the extent of protection the colonial assembly would provide for the hinterlands as the area suffered from destructive raids. During the War for Independence, Philadelphia and its Pennsylvania hinterlands experienced disruption but not for extended periods of time, allowing economic activity to largely continue and cement its role as a producer. By the end of the eighteenth century, it led the new nation in production of textiles and leather goods, as well as metalworking and carpentry.

In the late eighteenth century, the creation and improvement of roads from Philadelphia deep into the hinterlands eased travel, improving freight transportation but also pushing the frontiers beyond its reach. Benjamin Franklin (1706-90) advocated for improving road networks, emphasizing the communication benefits as postmaster general. Improving communication and mail helped information from centrally located Philadelphia reach its hinterland and other colonies (later states) faster than ever, further increasing Philadelphia’s economic and political influence. In 1794, Pennsylvania completed a paved turnpike connecting Philadelphia with Lancaster, which lowered transportation costs by as much as two-thirds and was the first of its kind in the nation. This simultaneously drew Lancaster more into Philadelphia’s orbit, and made it a commercial center in its own right, as a gathering point for central Pennsylvania’s goods.

By the turn of the nineteenth century, Philadelphia’s hinterland reached as far west as Lancaster and Reading on the Schuylkill River, and the city’s influence extended to the edge of the Appalachian Mountains and the Susquehanna River watershed. The city commanded the Delaware River Valley as far north as Trenton at the falls of the Delaware. Ships going in and out of Delaware Bay called on Delaware’s smaller ports, such as Wilmington and New Castle, creating a connection for Philadelphia at those locations as well. During the same period, however, New York City to the north and Baltimore to the south increasingly grew and rivaled Philadelphia as leading international ports for the mid-Atlantic states, especially from north of Trenton and the Susquehanna Valley, respectively.

From the time of its founding, Philadelphia’s location and natural resources made it a commercial hub for the surrounding region. As the eighteenth century progressed, manufacturing capabilities increased and Philadelphia’s exports became more diversified while the city increasingly grew as a commercial and political center through the periods of the American Revolution and early Republic.

Jordan AP Fansler grew up in Pennsylvania, is a graduate of Saint Joseph’s University in Philadelphia, and has worked at multiple museums in Greater Philadelphia.  His doctoral thesis and scholarly work focus on the relationship of citizens to their state, national, and imperial governments in the early-modern Atlantic World. (Author information current at time of publication) 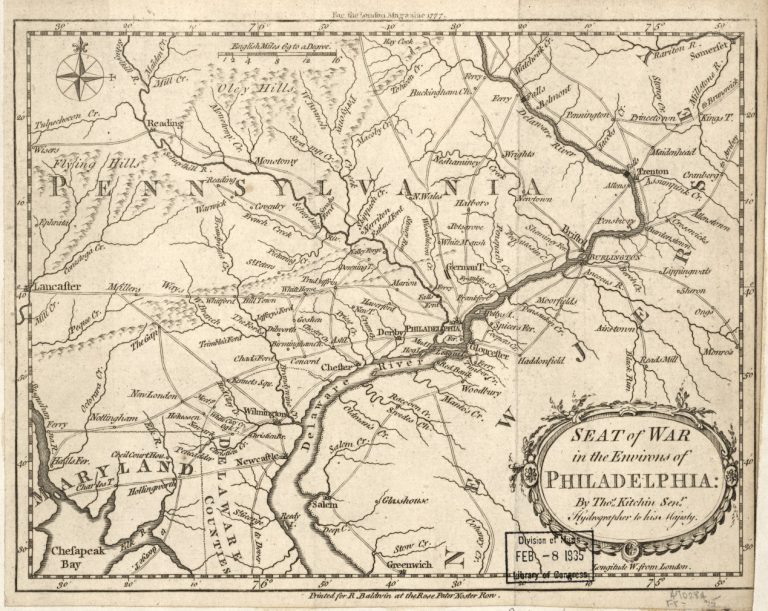 Philadelphia and Its Hinterlands

Between the seventeenth and the mid-nineteenth centuries, Philadelphia’s hinterlands experienced rapid growth and expansion. This map, charted by a British cartographer during the American Revolutionary War, provides an idea of how large an economic region Philadelphia commanded. By the middle of the nineteenth century, Philadelphia was a commercial hub for a region that reached the Susquehanna River Valley in the west, Allentown in the north, the New Jersey shore in the east, and Delaware to the south. This large geographic base allowed the Philadelphia region to have a diversified economy, which in time produced agricultural products, iron, ships, and many other products.

Philadelphia was connected to its hinterlands through a series of roads and the Delaware River. As shown on this map, the many creeks in southern New Jersey allowed people from the interior of the peninsula to transport their goods to markets in Philadelphia. This map also illustrates the many roads of Pennsylvania and Delaware that connected these regions to the markets of Philadelphia. 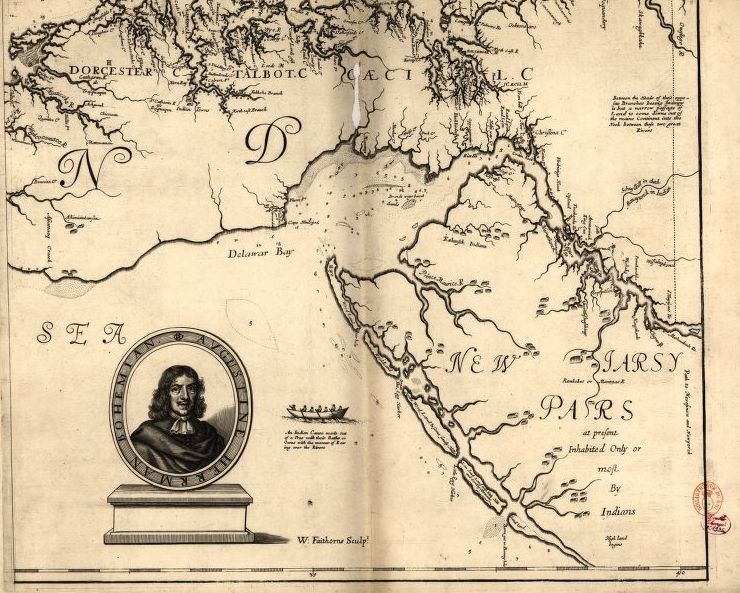 The Lenapes who lived throughout West New Jersey lived in autonomous towns along the rivers and coasts for centuries before Dutch, Swedish, Finnish, and English settlers came to the area. This section of a 1673 map of Virginia and Maryland shows a section of what would become West New Jersey, noting the Native American groups that dominated the region.

By 1675, hundreds of Quakers traveled to West New Jersey and purchased land from the Lenapes through trade. Some Quaker colonists, such as the initial settlers of Burlington in 1677, depended on the Native Americans for meat, vegetables, and assistance in constructing temporary housing. The slow growth of the West New Jersey colony, local settlement autonomy, and the power of the Lenapes created more intercultural alliances and constructed a different daily culture than in surrounding colonies.

Also of note on this map are the many creeks which feed into the Delaware River. For much of this period goods produced by the sparse population of West Jersey were transported to Philadelphia using these waterways. 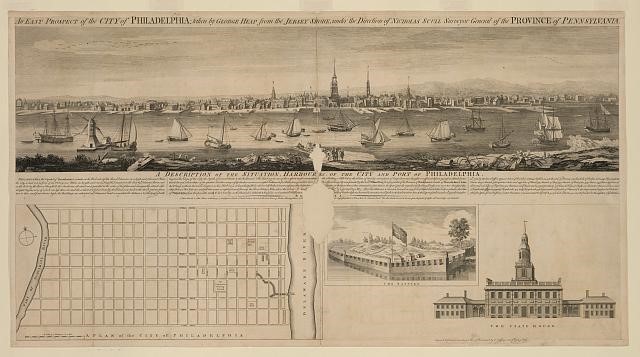 A View of Philadelphia (Printed in 1768) 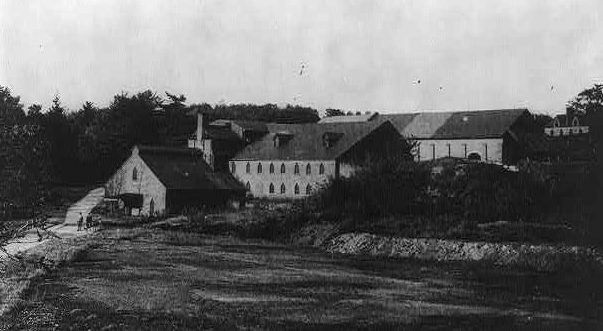 During the 1750s, around the same time that Pennsylvania and northern Delaware were growing as farming regions, West New Jersey and Berks and Lancaster Counties in Pennsylvania were growing as iron-forging regions. Iron furnaces, like the one pictured here in Cornwall, Lebanon County, provided the iron necessary in the shipping and household wares industries of Philadelphia. 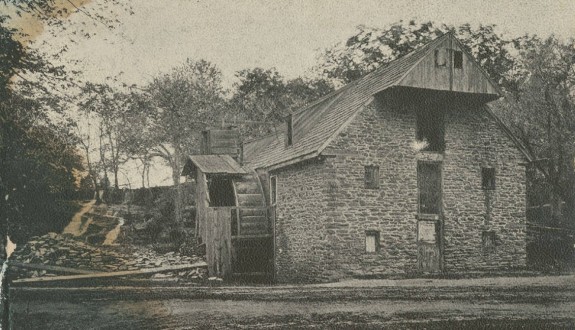 During the 1750s, the Philadelphia hinterlands were evolving into the breadbasket of the British Empire. Grain mills like this one, Roberts' Grist Mill in Philadelphia County, were concentrated in Pennsylvania and northern Delaware. This part of the Greater Philadelphia region was where areas of fertile farmland met with abundant sources of water power. The combination of these two qualities made these regions a natural choice for the location of grain mills during the colonial era.

Roberts’ Grist Mill, built on Wingohocking Creek by Richard Townsend in 1683 and demolished in 1873, is considered to have been oldest grist mill in Pennsylvania. Townsend built one other mill, commissioned by William Penn. Penn tried to corner the public market on grist milling, which indicates how lucrative he believed it to be. In his reminiscences, Townsend noted that early Pennsylvanians did not have horses and hauled grain on their backs to mills such as this one. In this image, the water wheel is clearly visible on the outside of the mill. That would not be common of later mills, most were built with indoor wheels. (Caption adapted from the Library Company of Philadelphia) 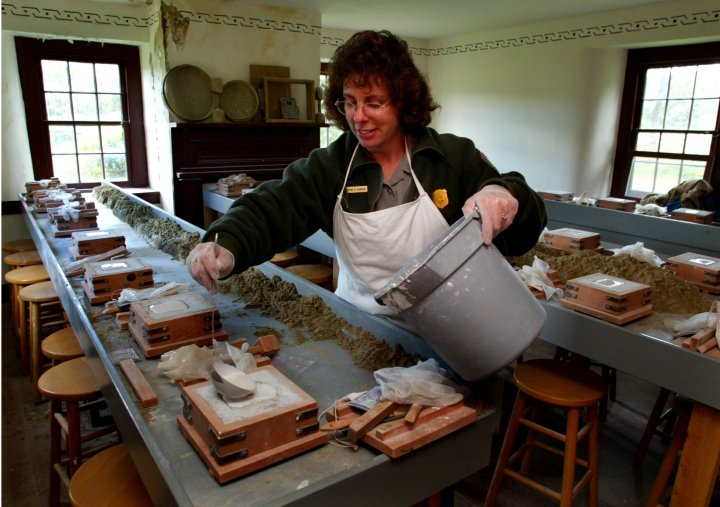 By 1750, increasing grain production made Philadelphia’s hinterland the breadbasket of the British Empire. The new emphasis led to an increase in flour mills for processing the grain. Mills operated throughout the hinterland but had the highest concentration and outputs in Pennsylvania and northern Delaware, where fertile lands combined with strong streams for waterpower to facilitate the milling of grain.

Likewise, iron production and its attendant forges and foundries grew during the same period, primarily in Berks and Lancaster Counties in Pennsylvania and in western New Jersey.

Once such iron producer was Hopewell Furnace, an "iron plantation" in Berks County preserved today as Hopewell Furnace National Historic Site, located near Elverson, Pennsylvania, about an hour outside of Philadelphia. It is considered one of the finest examples of a rural nineteenth-century American iron plantation. Here, a ranger fills a demonstration mold in one of the site's teaching rooms. (Photograph by R. Kennedy) 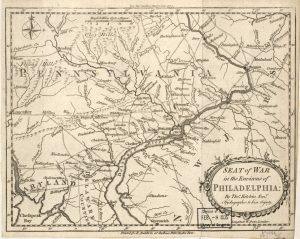 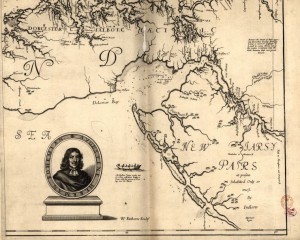 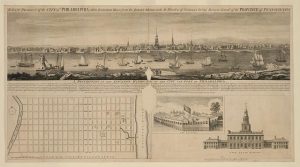 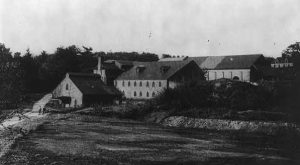 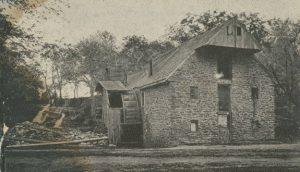 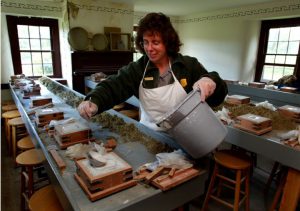