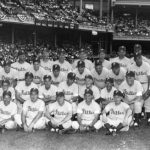 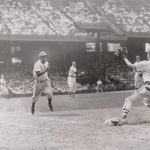 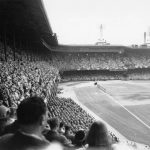 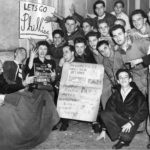 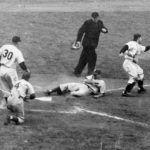 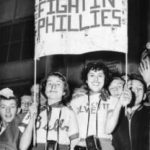 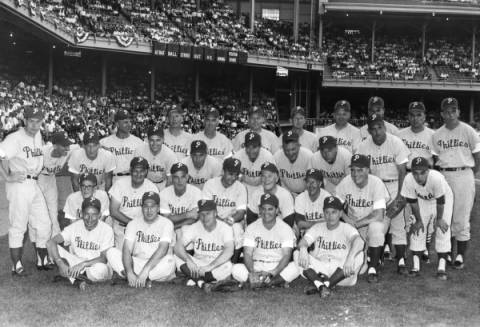 The 1950 Philadelphia Phillies baseball team, which surprisingly won the National League pennant but lost to the New York Yankees in the World Series, gained the nickname the “Whiz Kids” from Newspaper Enterprise Association sports editor Harry Grayson during spring training in Clearwater, Florida.

The Whiz Kids, shown here in their 1950 team photo, had a roster dominated by young players, including future Baseball Hall of Famers Robin Roberts on the mound and Richie Ashburn patrolling center field. 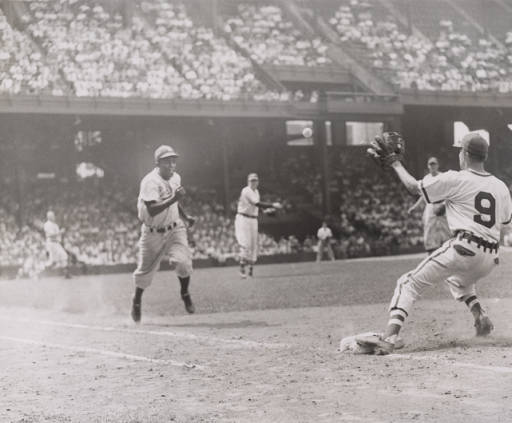 The Phillies opened the 1950 season on April 18, with a 9-1 defeat of the Brooklyn Dodgers, the defending league champions, with Robin Roberts earning the win. One of the best-known members of the Brooklyn Dodgers, Jackie Robinson, the first African American to play Major League Baseball, is shown here running to first base during the opening game played at Shibe Park. 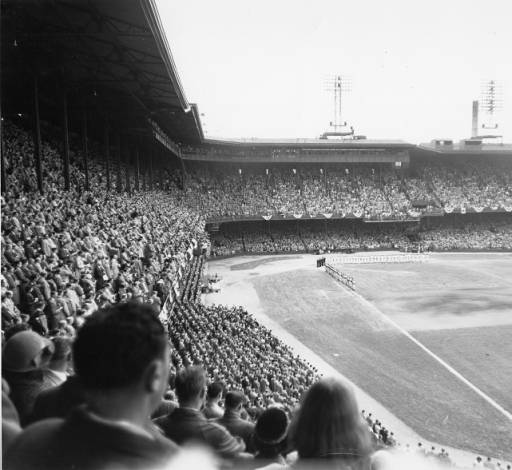 The first game of the 1950 World Series, shown here, was played on October 4 in Philadelphia at Shibe Park, located at Twenty-First Street and Lehigh Avenue. Shibe Park was home to both of Philadelphia’s professional baseball teams, the Athletics and Phillies, until 1954, when the Athletics franchise left Philadelphia for Kansas City. In 1953 the stadium was renamed Connie Mack Stadium, after the Athletics longtime manager, and remained the Phillies’ home until 1970. 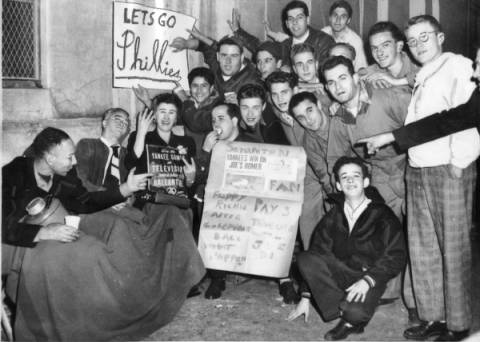 Phillies Fans from Scranton Are First in Line at Yankee Stadium

Fans of the Whiz Kids from Scranton Pennsylvania, 124 miles outside of Philadelphia, are shown here waiting in line to get bleacher seats for Game 3 of the World Series, played on October 6, 1950, at Yankees Stadium. Unfortunately for Phillies’ fans, the Yankees won the game by a score of 3-2 and took a commanding 3-0 series lead. The Yankees completed the sweep of the Whiz Kids the next day, October 7, by a score of 5-2, winning their second of five straight championships between 1949 to 1953. 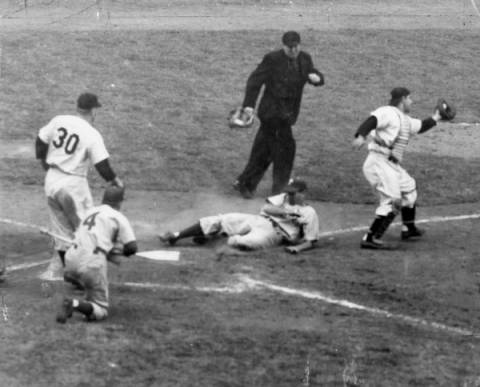 Game 3 of the 1950 World Series was played at Yankee Stadium on October 6 and featured Phillies pitcher Ken Heintzelman against Yankees pitcher Eddie Lopat. The Phillies shortstop, Granville “Granny” Hammer, shown here sliding across home plate in the seventh inning, gave the Phillies a 2-1 lead, their first lead of the World Series. The following inning, starting pitcher Heintzelman walked the bases loaded and was relieved by Jim Konstanty, who promptly produced a grounder to shortstop Hammer, who misplayed the ball, allowing the tying run to score. The Yankees would follow up in the ninth inning scoring another run and winning the game, taking a 3-0 lead in the series. 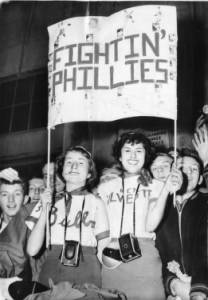 Whiz Kids Are Their Champions

The Whiz Kids brought excitement to many Philadelphia sports fans as they achieved in 1949 their first winning season since 1932 and built upon that success in 1950, leading to their World Series appearance. The Whiz Kids were not strictly a Philadelphia-area phenomenon. Here, Rhoda Schactman (left) and Phyllis Wymisner, of Newark, New Jersey, root for the Phillies at Game 4 of the World Series played on October 8, 1950, at Yankee Stadium. Despite the sweep of the Whiz Kids by the Yankees and the Phillies’ rapid decline in later seasons, the Whiz Kids secured their place Phillies history. 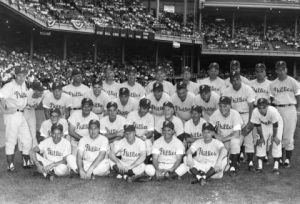 The 1950 Philadelphia Phillies baseball team, which surprisingly won the National League pennant but lost to the New York Yankees in the World Series, gained the nickname the “Whiz Kids” from Newspaper Enterprise Association sports editor Harry Grayson (1894-1968)  during spring training in Clearwater, Florida. The team had a roster dominated by young players, including future Baseball Hall of Famers Robin Roberts (1926-2010) on the mound and Richie Ashburn (1927-97) patrolling center field. 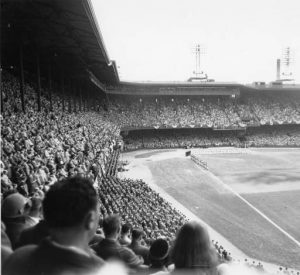 The Phillies opened the 1950 season with a 9-1 defeat of the Brooklyn Dodgers, defending league champions, with Roberts earning the win. The early success did not last, as the team had a .500 record and was mired in sixth place at the end of April. The season soon turned around, however, as the Phillies reached third place, half a game behind Brooklyn and St. Louis, on June 1. For the remainder of the season, the Whiz Kids were in first place at the beginning of each month and opened up a seven-game lead with eleven games left. The team then lost eight of the next ten games before facing the Brooklyn Dodgers at Ebbets Field in the season finale. The Whiz Kids won the clincher 4-1 in extra innings, avoiding a best-of-three playoff.  Sisler bashed a three-run home run in the top of the tenth inning, and Roberts pitched a complete game. 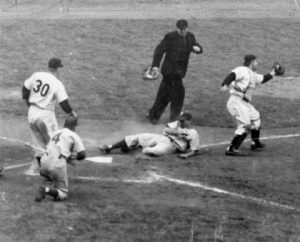 The magic, however, ran out in the World Series. Konstanty started for the first time that season in Game 1, losing 1-0 to the Yankees. Roberts lost Game 2, 2-1 on a tenth-inning home run by Joe DiMaggio (1914-99). Game 3, started by Simmons, resulted in another one-run loss, 3-2.  The “Whiz Kids” then lost Game 4 5-2, swept by the Yankees in that team’s second of five straight world championships between 1949 and 1953.

The 1950 season raised hopes for a continuing string of Phillies titles. The following year, however, the team fell to fifth place, and it had only two more winning seasons the rest of the decade. Seminick and Sisler were traded to Cincinnati following the 1951 season. Carpenter fired Sawyer in June 1952 but rehired him in 1958. Other members of the Whiz Kids either were sold or traded, and by the end of the decade only Ashburn, Roberts, and Simmons remained on the team.  By 1958, the Phillies fell to last place and remained there until expansion in 1962.  The Whiz Kids, however, continued to remain in the hearts of Phillies fans.

Karen Guenther is Professor of History at Mansfield University and author of Sports in Pennsylvania, published by the Pennsylvania Historical Association.