The American Revolution in Delaware is the subject of a new book by Kim Rogers Burdick, who also is the author of the essay about the gunpowder industry in The Encyclopedia of Greater Philadelphia.  According to the History Press, the publisher of Revolutionary Delaware: Independence in the First State: 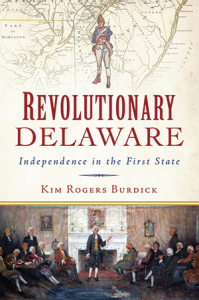 In 1776, Delaware declared independence from both England and Pennsylvania. Originally known as the Three Lower Counties of Pennsylvania, the First State was instrumental in the fight to form a new republic. The Marquis de Lafayette, Nathanael Greene and George Washington all made trips to the state. Caesar Rodney’s ride and the Battle of Cooch’s Bridge are legendary, but the state has many unsung heroes. Citizens from every village, town, crossroads and marsh risked their lives to support their beliefs. Author Kim Burdick offers the carefully documented story of ordinary people coping with extraordinary circumstances.

Kim Burdick will speak and sign copies of her book on Saturday, December 17, at 10:30 a.m. at the Kirkwood Library, 6000 Kirkwood Highway, Wilmington, Delaware.