Almanacs, annual publications containing calendars, recipes, humor, and references to medicine and other resources, played an important role in disseminating useful information and in the business and development of printing and publishing in the British North American colonies and during the early republic. English settlers brought the almanac format to the North American colonies, including Pennsylvania shortly after its founding. By the mid-eighteenth century Philadelphia emerged as a central location for their production, and its printers were responsible for some of the most popular almanacs through the century and into the early nineteenth century. Almanac publishing continued into the twenty-first century, but the emergence of daily newspapers in the nineteenth century and then ready access to information from internet sources in the twentieth and twenty-first centuries led to their general decline over time.

During the colonial period into the era of the Early Republic, these short publications, akin to pamphlets, usually numbering fewer than 50 pages, were smart investments for printers. Relatively simple to produce, they did not require time-consuming illustrations or excessive amounts of paper. Printers often compiled their content, which they generally tailored to the local audiences to ensure relevance and interest. Printers usually adjusted print runs each year to meet demand. Almanacs were extremely popular; after the Bible and other religious works, they were the most widely purchased books in America.

Before the standardization and proliferation of newspapers by the early nineteenth century, almanacs were among the only sources of standardized timekeeping. Calendars included information about eclipses, the tides, and the phases of the moon. Reference sections might include weather forecasts, currency conversions, and the dates of local court sessions. In an effort to make their publications stand out in a competitive market, some almanac makers eventually included lighthearted additions such as recipes, jokes, and short stories.

The most successful publisher of almanacs was Benjamin Franklin (1706-90). His Poor Richard’s Almanack was among the best-selling almanacs in the region, with Franklin at its helm from 1732 through 1758. Adopting the persona of “Richard Saunders,” Franklin proffered his unique brand of prophecy, proverbs, poetry, puzzles, and practical advice on all manner of subjects, with humor to great effect. He also ran serial stories to hold readers’ attention over the years, and occasionally used his almanac to advocate for public issues, most famously his effort to promote paper currency in the colonies. Poor Richard was so popular (and profitable) that Franklin expanded the scope of its coverage and production, sometimes printing as many as 10,000 copies a year and selling hundreds of copies to printers as far away as Boston and Charleston.

In the larger Philadelphia region other printers produced almanacs to meet local interests. Agricultural areas looked to them for weather and other information useful for planning plantings and for information on raising various crops and animals. Almanacs held a unique significance to Lancaster County, Pennsylvania’s most important agricultural region. Lancaster printer John Baer (1797-1858) debuted the Lancaster Agricultural Almanac in 1825. An excellent example of the utility and tradition an almanac can provide to a community, it has remained in print today, with a readership across the Mid-Atlantic region and into Ohio.

Other almanacs linked greater Philadelphia with the surrounding areas. The New Jersey and Pennsylvania Almanac published regularly in Trenton from the early 1790s through the 1820s. Serving an even larger area, Samuel Adams (d. 1841) printed and sold The New Jersey, Pennsylvania, Delaware, Maryland, and Virginia Almanac (1790-1810) from his Market Street shop.

Almanac production waned in the nineteenth century, with the increasing number of daily newspapers that dispensed much information previously the province of almanacs. Still, some area printers continued to produce almanacs, including the city’s own Farmers’ Almanac, printed by J. Hollowbush in the 1850s – not to be confused with the famous and still publishing Farmers’ Almanac, founded in Morrisville, New Jersey, in 1818 but since relocated to Maine and also available in an on-line edition since 1997. John Baer’s Agricultural Almanac was a representative example of the changes in almanacs during the nineteenth and twentieth centuries; in addition to the standard calendar and weather forecasts, content transitioned from farming advice to gardening tips, trivia, and folklore as the forces of industrialization pulled workers into the cities.

Significant transformations in mass media and technology occurred throughout the twentieth century, but the Philadelphia almanac tradition persisted. The city’s Evening Bulletin newspaper published the annual Bulletin Almanac from 1924 to 1976. In lieu of the standard calendar as the focal point, this almanac provided useful information about the governments, laws, and municipal services of Pennsylvania, New Jersey, and Delaware. It did, however, retain such traditional almanac elements as recipes, tables of weights and measures, and proverbs. Kenneth Finkel (b. 1951) revived this ‘handbook style’ of almanac in the late twentieth century, publishing the Philadelphia Almanac and Citizens’ Manual for the Library Company of Philadelphia in 1994 and 1995.

Despite their ephemeral nature and heavy use, many almanacs survive as valuable resources for historical inquiry. Their contents have provided historians and others with sustained collection of meteorological and astronomical data unavailable elsewhere, and useful today in such ways as measuring long-term climate patterns.  Equally as valuable is the illumination of food preparation, moral advice, and humor in the almanacs. Taken together, almanacs provide revealing snapshots of daily life and interests in the greater Philadelphia region. 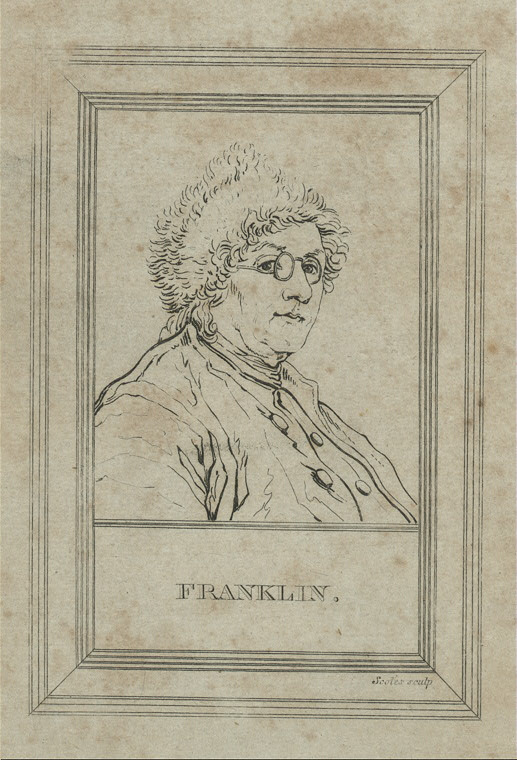 New York Public Library
From 1732 to 1758, Benjamin Franklin wrote Poor Richard’s Almanack, one of the best-selling almanacs in the American colonies.

Franklin was born in Boston in 1706, the tenth son of seventeen children. At the age of 10, he was made apprentice to his older brother James. During this period, Franklin became proficient with the printing press, and he read constantly to improve his writing. From that point on, Franklin wrote and thought widely, founding his own newspaper, the New-England Courant in 1721, and writing a collection of satirical essays under the pseudonym of “Silence Dogood” in 1722.

Eventually, though, Franklin’s brother James learned the identity of “Silence Dogood”, and treated Benjamin harshly. In 1723, Franklin fled south to break his apprenticeship with his brother, settling briefly in New York and then establishing himself in Philadelphia. This would be his main home for the rest of his life. The portrait of Franklin reproduced here, done by Charles Cochin, was commissioned at this stage of Franklin’s life.

Franklin’s most popular, and profitable, writing venture was Poor Richard’s Almanack. In the Almanack, Franklin wrote under the character of “Poor Richard”—a home-schooled philosopher and every-man, who filled each issue with witticisms on being prudent, wise, and moral. Many of Poor Richard’s sayings remained alive as late as the twenty-first century, for example, “Early to bed and early to rise, makes a man healthy, wealthy, and wise.” Enormously popular in Pennsylvania and the nearby region, the almanac eventually expanded to colonies to the North and South.

After ending Poor Richard’s Almanack in 1758, Franklin continued on to an illustrious and influential life as one of the Founding Fathers of the United States and a living symbol of the “Self Made Man.”
-- Text by Ian Fleming 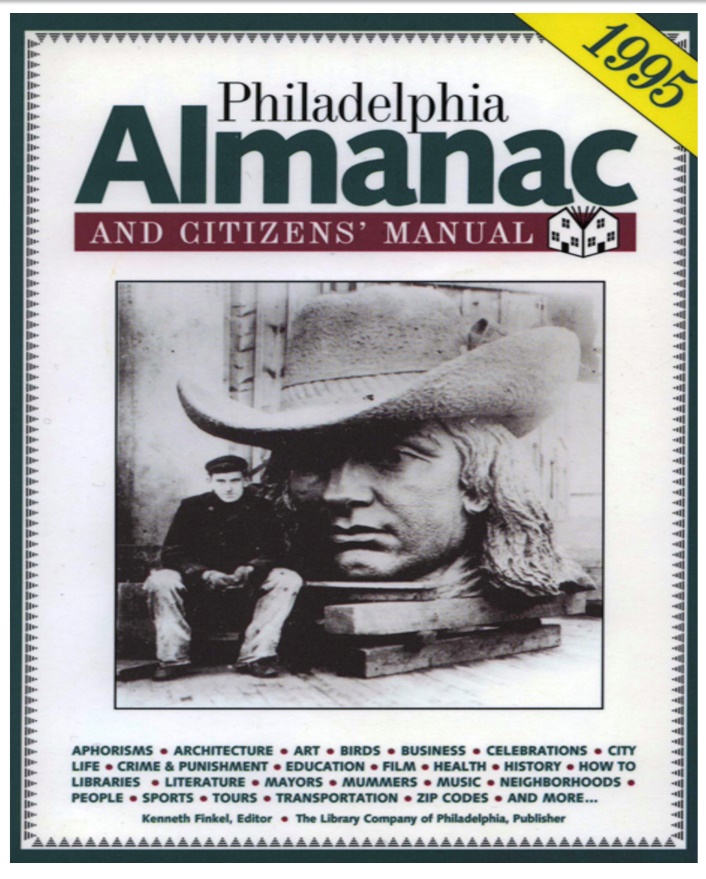 Despite changes in mass media, Kenneth Finkel revived the almanac as a Philadelphia tradition while serving as curator of prints and photographs at the Library Company of Philadelphia. In 1994 and 1995, the Library Company published the Philadelphia Almanac and Citizens’ Manual. The 1994 edition contained 389 names of neighborhoods within Philadelphia going as far back as the earliest days of Swedish settlement. In the following year, the 1995 edition (pictured here), added six additional names. The Philadelphia Almanac and Citizens’ Manual contained not only neighborhoods, but a range of fundamental information to meet local Philadelphia interests. (Photograph courtesy of Kenneth Finkel)
-- Text by Sarah Quintana 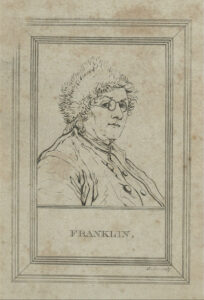 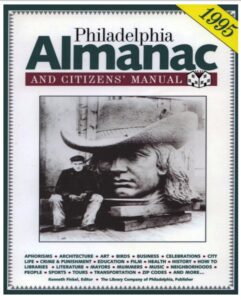 Amory, Hugh, and David D. Hall. A History of the Book in America. Volume 1, The Colonial Book in the Atlantic World. Chapel Hill, NC: Published in association with the American Antiquarian Society by the University of North Carolina Press, 2007.