Dox Thrash (1893-1965) was an accomplished draftsman, printmaker, watercolorist, and painter, whose art reflected his experiences as an African American in Philadelphia. He became well known in the 1940s after developing the Carborundum printmaking technique at the Philadelphia Fine Print Workshop (311 Broad Street) of the Works Progress Administration’s Federal Art Project. By rubbing coarse Carborundum crystals onto a metal plate with a heavy flatiron, he created prints with dense blacks, smooth, sculptural forms, and velvety textures. His dignified representations of African Americans in his portraits, genre scenes, nude studies, and landscapes deeply resonated with the Black community in Philadelphia and earned him national acclaim.

Born in Griffin, Georgia, Thrash settled in Philadelphia in 1925 to pursue his lifelong ambition to become an artist. He had first studied art by taking correspondence courses as a teenager. In 1914, he enrolled in evening classes at the Art Institute of Chicago. His studies were interrupted in 1917 by the U.S. entry into World War I. After serving in the army for fourteen months in an all-Black unit known as the Buffalo Soldiers, Thrash resumed his art education in Chicago. Eligible for government funding because of his war service, he registered as a full-time student for the first time in 1920. Over the next three years, he studied painting, drawing, mural design, commercial art posters, lettering, and decorative composition. He also received private tutoring from William Edouard Scott (1884-1964), a distinguished African American painter and muralist. Thrash then worked part-time jobs and drew portraits in Boston, Connecticut, and New York before finding work as a commercial artist in Philadelphia. He designed posters for the American Interracial Peace Committee, which held an annual Negro Music Festival, and the Tra Club, a cultural center founded by African American artists.

Thrash developed his skills as a printmaker under the guidance Earl Horter (1880-1940) at the Graphic Sketch Club (which in 1944 became the Samuel S. Fleischer Art Memorial, located at 719 Catharine Street). There, he mastered a variety of techniques, including etching, aquatint, drypoint, mezzotint, lithography, and linoleum cut. He enjoyed experimenting, often combining several processes in one print and reworking his plates to create unique impressions.

In 1937, Thrash joined the Philadelphia Fine Print Workshop. His investigations of materials and techniques led him to invent the Carborundum printmaking process. With the help of colleagues Hugh Mesibov (b. 1916) and Michael Gallagher (1898-1965), he discovered that roughening the surface of a copper plate with Carborundum, a gritty industrial substance normally used to prepare lithographic stones, produced a wide range of rich tones and smoothly modeled forms. Thrash coined the prints he created “Opheliagraphs” in honor of his mother.

Thrash’s innovations in printmaking brought him widespread acclaim. Over the next two decades, he became a prominent artist in the Philadelphia region, exhibiting his work at the Philadelphia Museum of Art, Pennsylvania Academy of the Fine Arts, Print Club of Philadelphia (the Print Center, 1614 Latimer Street), and Philadelphia Art Alliance (251 S. Eighteenth Street). His strongest support came from the Pyramid Club (1517 W. Girard Avenue), a Black cultural society that included his work in its annual exhibitions and introduced him to an influential network of artists, curators, critics, and dealers.

Thrash’s reputation quickly grew outside of the Philadelphia region. Beginning in the late 1930s, he participated in landmark exhibitions of African American art across the country. The philosopher, writer, educator, and leader of the Harlem Renaissance Alain Locke (1885-1954) selected his prints for the exhibitions Contemporary Negro Art at the Baltimore Museum of Art in 1939, Art of the American Negro (1851-1940) at the Chicago Coliseum in 1940, and American Negro Art, 19th and 20th Centuries at the Downtown Gallery in New York in 1941. His work was also displayed in Chicago in the 1941 inaugural exhibition at the South Side Community Art Center, a racially diverse workshop run by the Federal Art Project. The following year, he had a solo exhibition of his graphic art at the historically Black college Howard University in Washington, D.C.

Thrash earned praise not only for his technical innovations but also his sympathetic representations of African Americans. As art historian Kymberly N. Pinder has noted, his art participated in the shaping of a positive Black identity, as put forth by Locke and sociologist, writer, and educator W.E.B. Du Bois (1868-1963). Challenging negative representations of African Americans as grinning buffoons that had circulated in mass visual culture since the nineteenth century, Thrash created sensitive, compelling portrayals of Black individuals in a variety of media. His portraits, character studies, and genre scenes, such as Mary Lou (c. 1939-40), Second Thought (1939), and Saturday Night (c. 1942-45), depict Black subjects with a sense of dignity and strength. Thrash also produced rural and urban landscapes that featured Black actors. Prints such as Cabin Days (c. 1938-39) allude to his southern upbringing. Others, such as Freight Yard (before 1943), focus on Philadelphia industries, in dialogue with the art of the Social Realists of the 1930s and 1940s.

Thrash began to focus more strongly on Black laborers during World War II when African Americans faced widespread discrimination in the rearmament program. Although he was a proud veteran, he was denied employment at the Philadelphia Navy Yard in 1942 because of his race. Prints such as Defense Worker (c. 1941) feature self-motivated Black men productively contributing to the war effort. From his portraits to his genre scenes to his cityscapes, Thrash’s wide-ranging subject matter addressed pertinent issues faced by African Americans.

Thrash remained active in the Philadelphia art scene until his death in 1965. Despite the national attention the Carborundum technique achieved during his lifetime, it failed to be embraced by artists outside the Philadelphia Fine Print Workshop. The seminal 2002 exhibition Dox Thrash: An African American Master Printmaker Rediscovered organized by the Philadelphia Museum of Art brought renewed attention to Thrash’s inventive approaches to printmaking and the salience of his subject matter to the Black community of his era.

Michelle Donnelly is a Curatorial Fellow at the Whitney Museum of American Art. She earned her M.A. in Art History from the University of Pennsylvania in 2014 and worked as a Curatorial Assistant at the Pennsylvania Academy of the Fine Arts from 2013 to 2014. (Author information current at time of publication.) 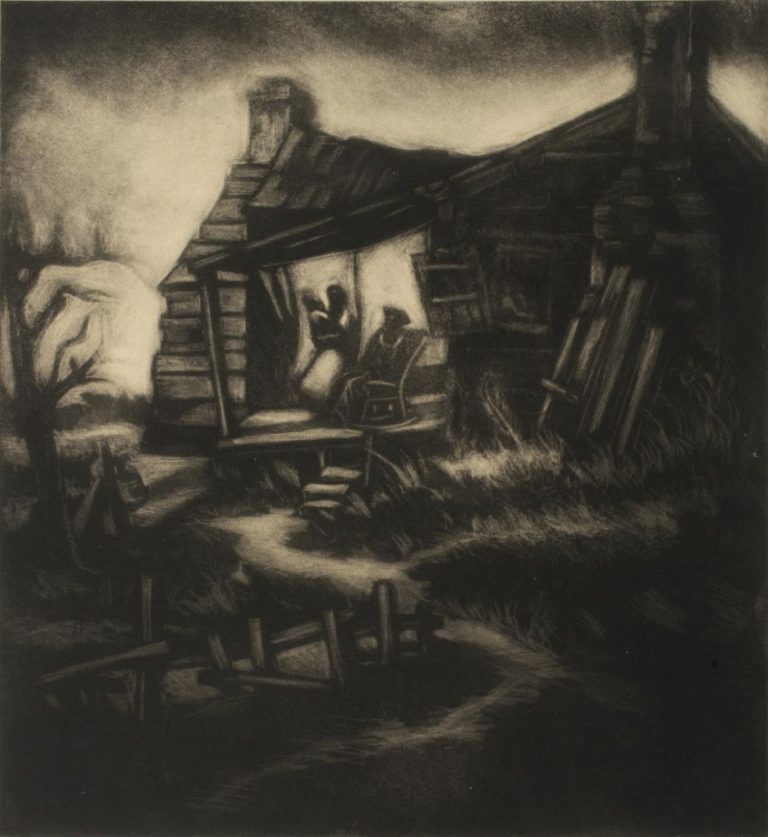 Inspired by his upbringing in the rural south, Thrash depicted nostalgic scenes of family washdays, country churches, and one-horse farms in many of his prints. Cabin Days portrays his childhood home, a former slave cabin in Griffin, Georgia, with crooked clapboards, broken shutters, and a tilted porch. Despite its dilapidated state, it is home to three generations: an older woman sits in a rocking chair beside a younger woman holding a baby. Thrash emphasizes the strength of the family unit—particularly the strength of African American women—in the face of impoverishment. 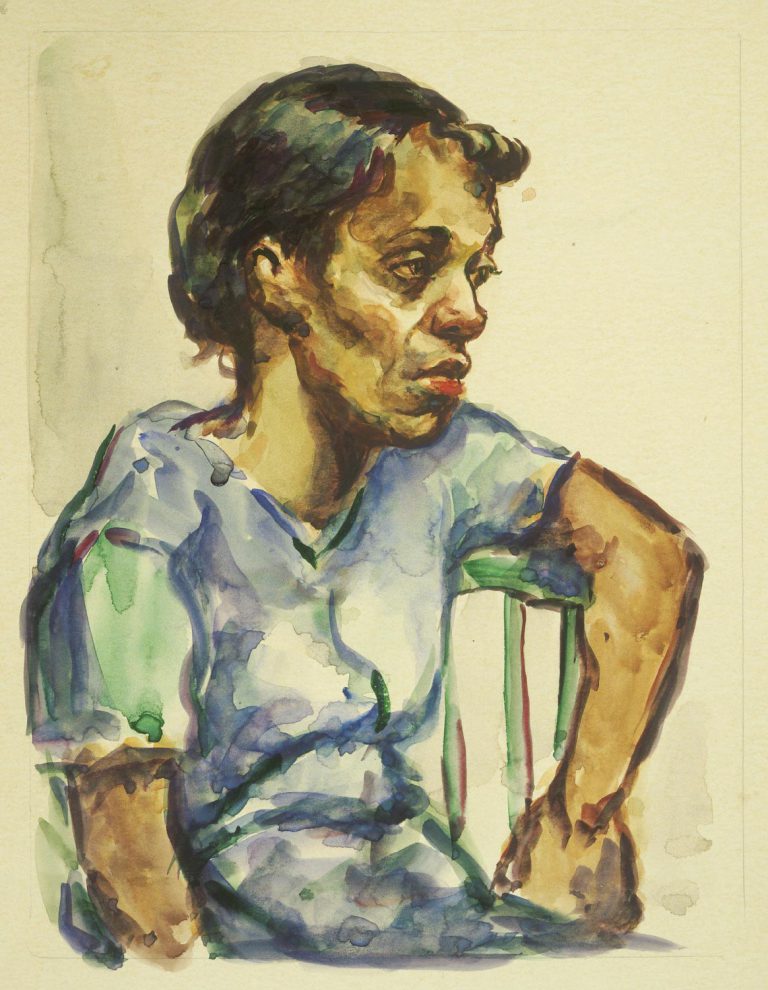 Pensive Woman exhibits Thrash’s masterful handling of watercolor. Employing fresh, vivid colors, he delineated his subject’s slumping body with bold, wavering lines. He then used thin, bleeding washes of blues, purples, and greens to render the rolls of her clothing, and he carefully layered small strokes of browns, tans, and reds to articulate her broad nose, full lips, hollowed eyes, and sunken cheeks. Like many of Thrash’s subjects, she appears lost in thought, disengaged from the present moment. 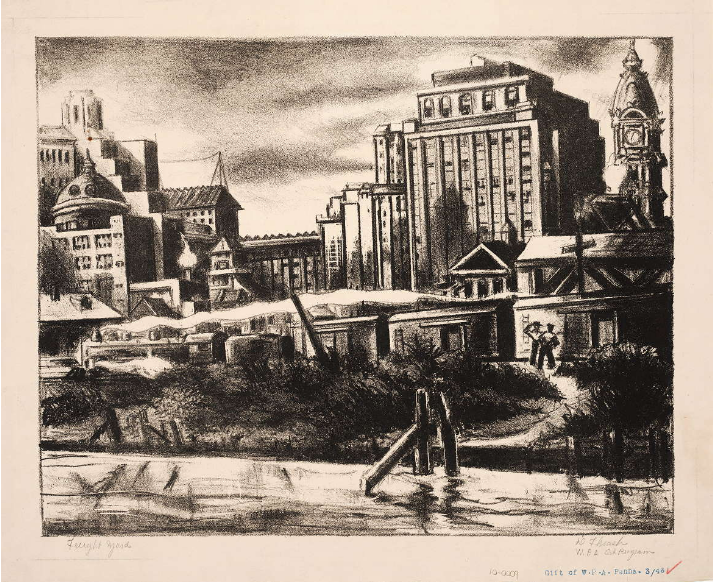 Executed for the WPA, Freight Yard is one of Thrash’s many prints that explores the role of workers in an urban-industrial environment. Two laborers stand in the right-center of the composition, dwarfed by the Philadelphia skyline with the iconic clock tower of City Hall visible at the upper right. While the race of the figures is difficult to determine, Thrash tended to represent the trades to which African Americans contributed heavily in Philadelphia but for which they received little pay, such as coal mining, night fishing, ship lading, and, in this instance, rail transportation. The workers’ marginality in the composition suggests their lack of autonomy. 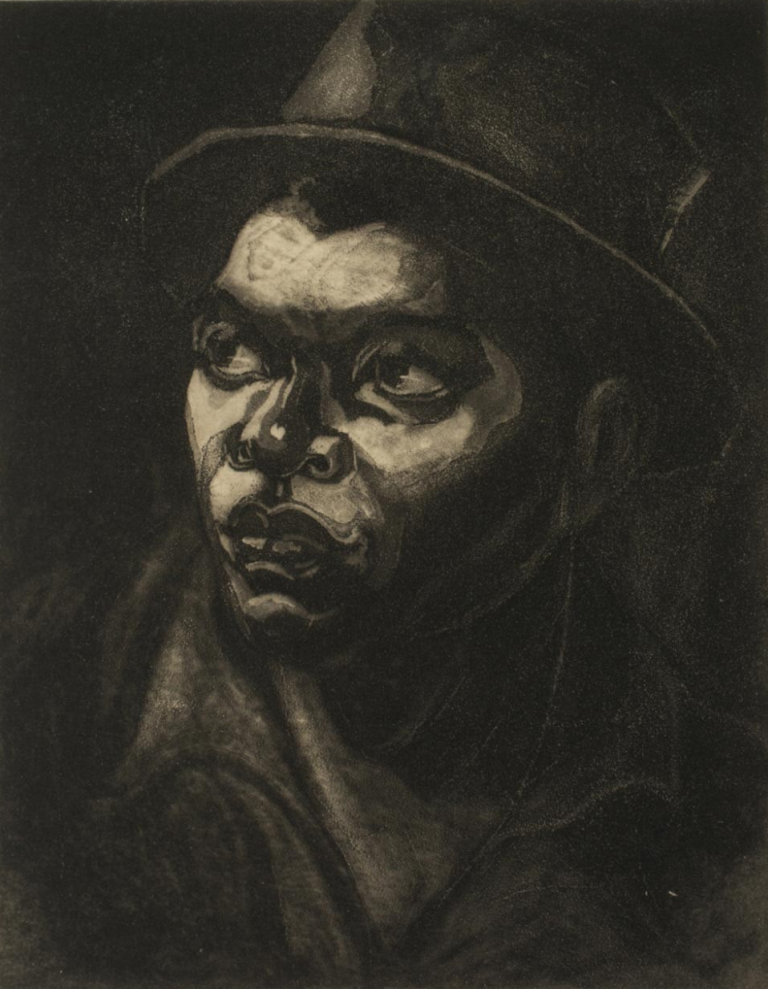 Thrash created over thirty character studies of African American men and women that reveal the dignity and strength of the black community. Typical of his subjects, the man in Second Thought (My Neighbor) looks out of the picture plane with deep concentration. He likely does not represent a specific individual but is a composite of several men whom Thrash encountered. Although he is anonymous, he does not conform to a stereotype; instead, he appears as a complex, thoughtful man with a rich inner life. 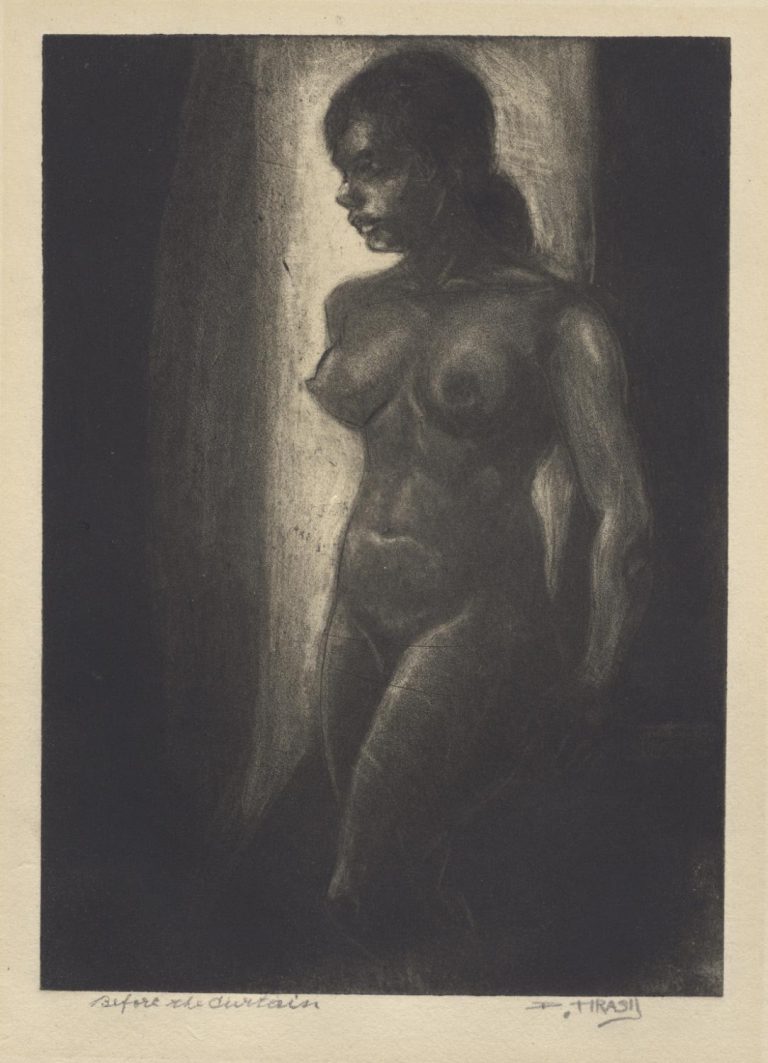 Before the Curtain (Nude Model)

Thrash celebrated the beauty of black bodies in over one hundred images of African American female nudes, a subject few artists portrayed before the 1970s. In this academic study, an African American model stands in a classical contrapposto pose with a downturned gaze. Thrash used a burnisher to articulate the volumes of her body against the brightly lit curtain and dark background. Characteristic of his nudes, she does not appear dainty or feeble but robust and sculptural. 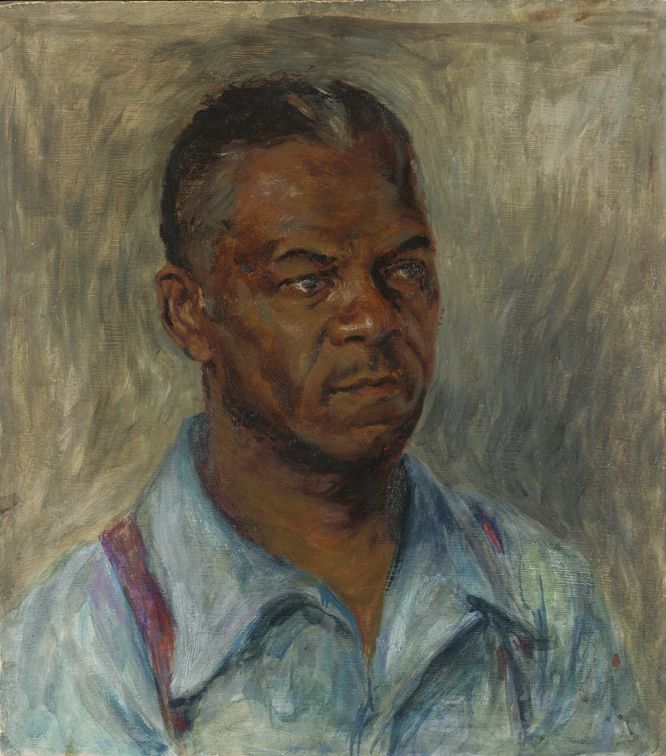 Thrash created this bust-length self-portrait around 1938, the year he started to gain national attention for his invention of the Carborundum printmaking process. Rather than representing himself in the medium for which he became best known, however, he used the more traditional material of oil paint. While he employed loose, sketchy brushstrokes to render the background and his clothing, he portrayed his facial features with specificity. The deep lines in his face and his graying hair reveal his age. Gazing out of the picture space with furrowed brows and a closed mouth—much like the subjects of his prints—he appears as a serious individual, deep in thought. 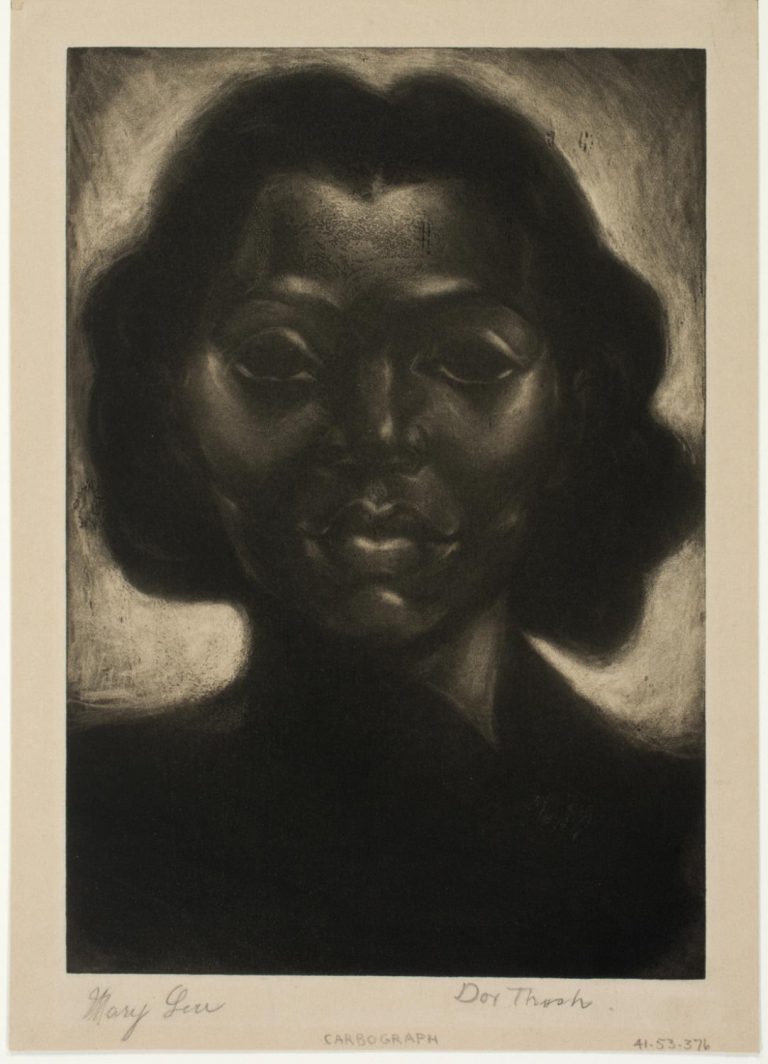 Thrash produced Mary Lou using the Carborundum printmaking technique he pioneered at the WPA’s Philadelphia Fine Print Workshop. First, he rubbed Carborundum, a gritty industrial substance made of carbon and silicone, onto a metal plate with a heavy flatiron to create a pitted surface that would print deep, rich blacks. He then used a burnisher to model the figure’s facial features, highlighting her cheekbones, edges of her lips, tip of her nose, and top of her forehead. As a result, her sculptural head strikingly emerges against the atmospheric background.

Typical of his practice, Thrash later reworked the plate for Mary Lou and created Miss X (c. 1940), which he possibly made as an engagement portrait for his soon-to-be wife, Edna McAllister. 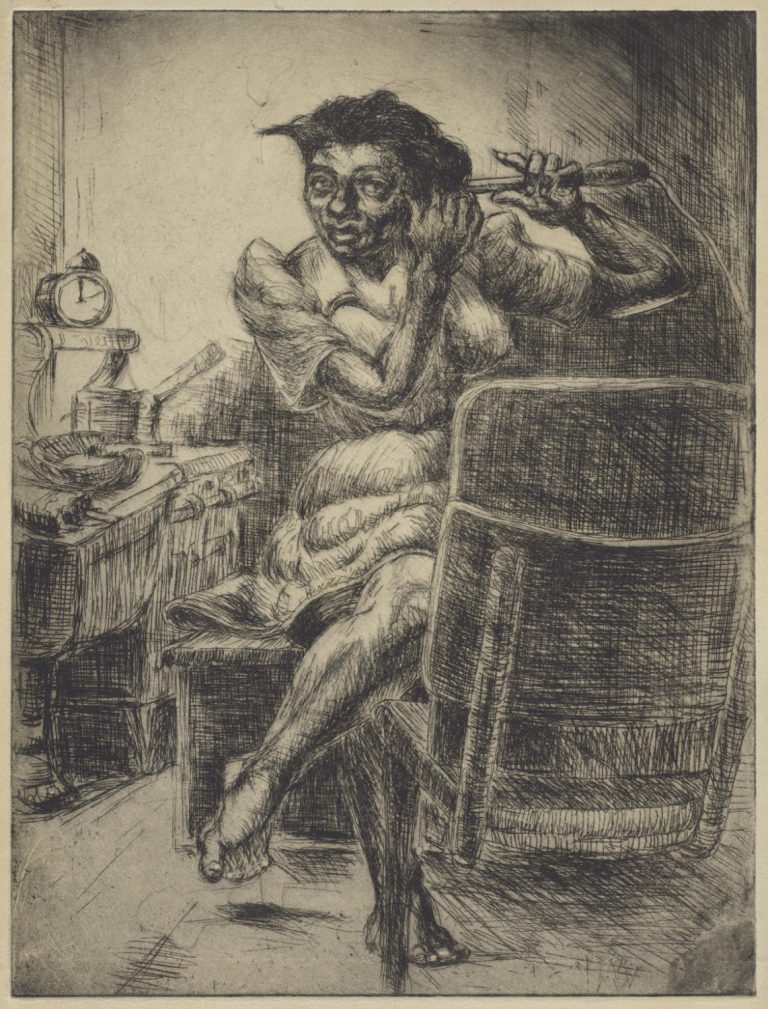 This etching features a black woman performing a common yet rarely depicted ritual in American genre scenes: the curling of her coarse hair to prepare for a night out. Thrash sets the scene in her kitchen, as indicated by the pot on the stove behind her. The empty chair in the foreground suggests she may have also recently done the hair of a customer or family member. Alone and unselfconscious, she sits barefooted with a weary expression on her face from a long day’s work.

Thrash returned to this subject at least four other times, recreating the composition in oil, tempera, woodcut, and Carborundum relief etching. 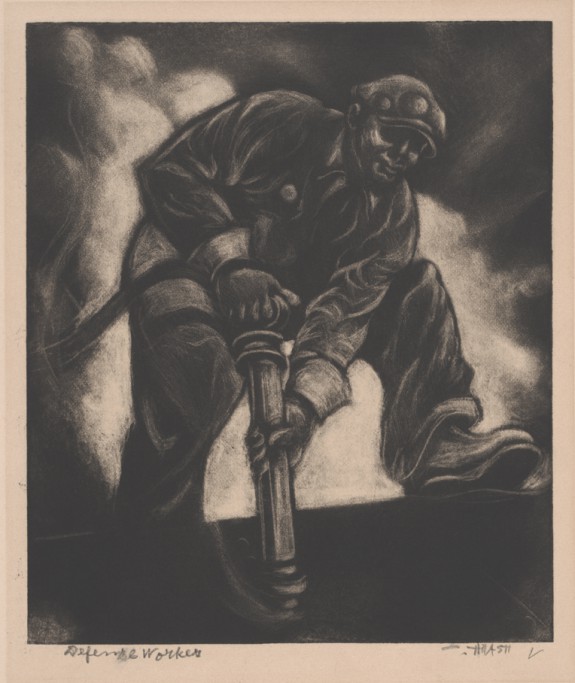 A working-class veteran, Thrash was one of the first artists of the Philadelphia Fine Print Workshop to respond to World War II. Between 1940 and 1942, he created a series of prints that feature workers engaged in the defense effort, a field in which African Americans faced rampant discrimination. Defense Worker highlights the contributions of an anonymous black riveter. The figure’s downward facial expression and forward-thrusting body suggest his total devotion to his job. Viewed from below, his hefty body takes on a heroic, dignified stature. 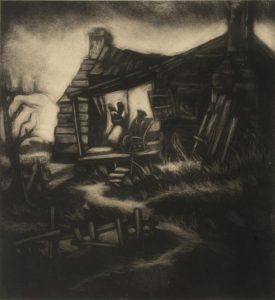 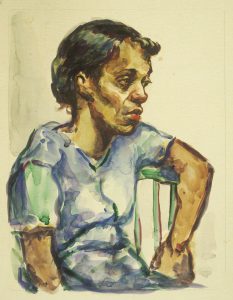 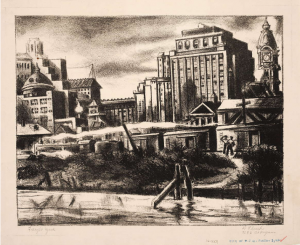 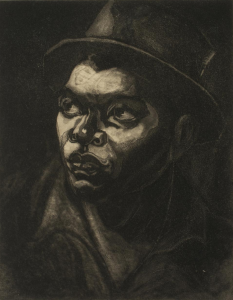 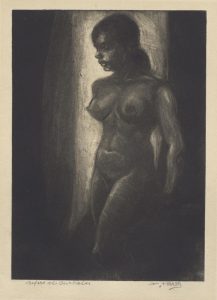 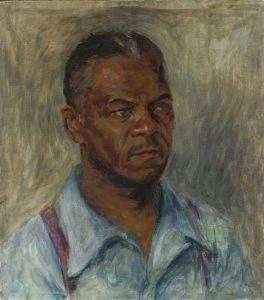 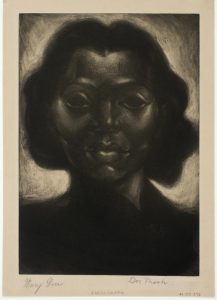 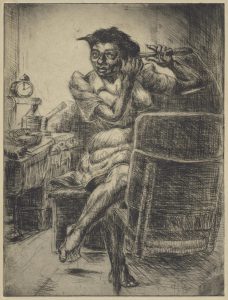 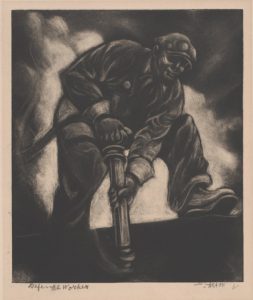 Doherty, M. Stephen, ed. Alone in a Crowd: Prints of the 1930s-40s by African-American Artists; From the Collection of Reba and Dave Williams. New York: Washburn Press, 1993.