Motorsports developed into a popular leisure activity in the Philadelphia area during the twentieth century. Originally an activity enjoyed by wealthy car owners, the advent of the Model T Ford allowed local technophiles to build their own race cars and compete in regional races. By mid-century, drivers raced at fairground horse tracks and purpose-built speedways throughout the region. Although several Philadelphia-area speedways closed by the late twentieth century because of increased safety concerns and suburbanization, auto racing continued in eastern Pennsylvania, Southern New Jersey, and Northern Delaware.

The Quaker City Motor Club also sponsored automobile endurance races on area roads. From 1908-11, the club organized a 200-mile race on an eight-mile course through Fairmount Park for American-manufactured automobiles with stock chasses. The event attracted local drivers such as brewer Erwin Bergdoll (1890-1965) as well as nationally-known racers including George Robertson (1884-1955) and Louis Chevrolet (1878-1941). City leaders debated the benefits of these races, and the Fairmount Park Commission suspended all racing in 1912 after concluding that motor races endangered participants and encouraged recklessness among the city’s automobilists.

Drivers from Greater Philadelphia garnered national acclaim for their racing exploits during the interwar period. In 1928, Charles Raymond “Ray” Keech (1900-29) of Coatesville set a new land speed record of 207 mph at Daytona Beach, Florida. Keech recorded several wins on local dirt tracks and won the 1929 Indianapolis 500 in a car entered by Philadelphian Maude Yagle (1885-1968). The only female car owner to ever win the Indianapolis 500, Yagle continued to hire Philadelphians, including Fred Winnai (1905-77), Jimmy Gleason (1898-1931) and Frank Farmer (1892-1932), to drive her race car over the next few racing seasons.

With the advent of smaller and less powerful race cars known as “midgets” during the Great Depression, automobile racing resumed within Philadelphia city limits. Promoters hosted midget races at Yellow Jacket Stadium in Northeast Philadelphia at Frankford Avenue and Deveroux Street. Formerly home to the National Football League’s Frankford Yellow Jackets, the stadium had been converted into a paved, one-fifth-mile speedway. Yellow Jacket Stadium held night races each week prior to World War II and remained popular with local residents who could walk or take public transportation to this speedway in the city.

The Office of Defense Transportation suspended all motorsports across the United States in 1942 in an effort to conserve the nation’s limited supplies of gasoline and rubber. Racing resumed immediately following the Allied victory. Postwar interest in automobile racing remained high, and a second Yellow Jacket Speedway located at Erie Avenue and G Street hosted biweekly midget racing programs from 1945 to 1950.

Over the next four decades, drivers competed in American Automobile Association (AAA)-sanctioned events, NASCAR (the National Association for Stock Car Racing), and in racing motorcycles and USAC (United States Auto Club) sprint cars at area speedways. Langhorne Speedway continued to attract the nation’s top open-wheel drivers, including A.J. Foyt (b. 1935), Mario Andretti (b. 1940), Al Unser (b. 1939), as well as NASCAR stars such as Lee Petty (1914-2000), Tim Flock (1924-98), and Edward “Fireball” Roberts (1929-64). Concerns over drivers’ safety as well as development along Route 1 led to the closure of Langhorne Speedway in 1971. Dirt track racing continued at local fairgrounds, including Harrington, Delaware and Flemington, New Jersey, until the 1990s.

The rising national popularity of stock car racing encouraged the construction of two area asphalt speedways for NASCAR racing events. The one-mile Dover International Speedway (originally called Dover Downs Speedway) located in Dover, Delaware, opened in 1969. Pocono Raceway, known as the “Tricky Triangle” because of its three sharp turns, began hosting races on its 2.5 mile speedway in 1971. Among the largest sports venues in the mid-Atlantic, Pocono Raceway and Dover International Speedway are known as “superspeedways.” Each track hosts two NASCAR Sprint Cup Series races each racing season. Large crowds of race fans camp on-site in order to attend qualifying races, related events, and socialize throughout the weekend of the race.

Alison Kreitzer is a Ph.D. candidate in the History of American Civilization at the University of Delaware. She is writing a dissertation about dirt track automobile racing in the mid-Atlantic region. (Author information current at time of publication.) 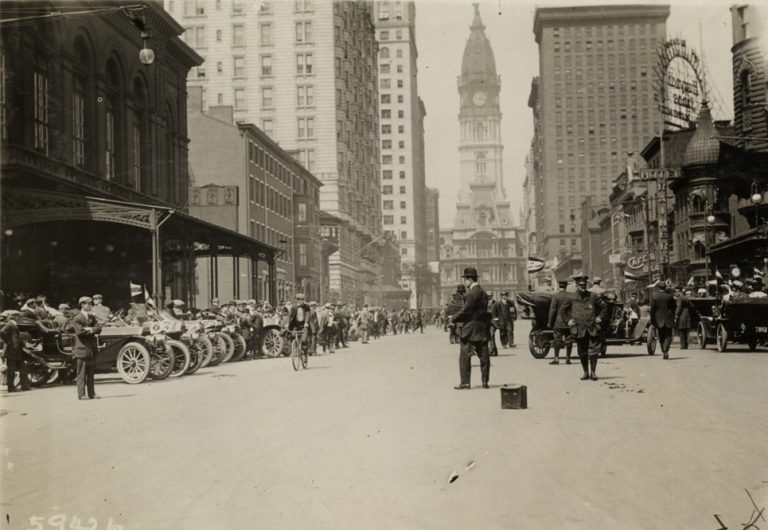 The Quaker City Motor Club sponsored automobile endurance races on Philadelphia-area roads from 1908 to 1911. Participants in the 1910 Roadability Run are shown here lined up on Broad Street waiting for the race to begin. The 1910 Roadability Run featured a route that ran from Philadelphia to Atlantic City, New Jersey, which is a sixty-one-mile drive today using modern roads. 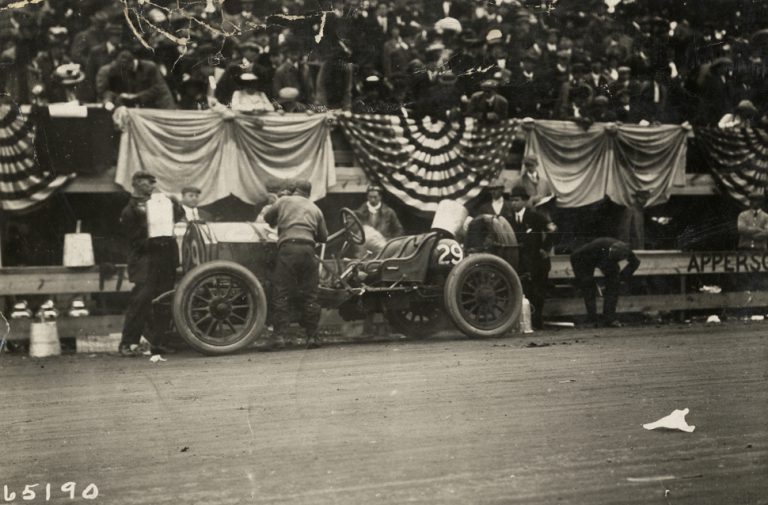 A pit stop in modern racing generally entails refueling, adding new tires, and mechanical adjustments, all performed by the pit crew as fast as possible to reduce the amount of time the driver is off the track. While the technology of the cars and pit crews have advanced significantly, the need for quick mechanical fixes and refueling has always been a part of racing. A pit crew is shown here, working on the number 29 car during the 1910 Fairmount Park Races as the crowd watches. 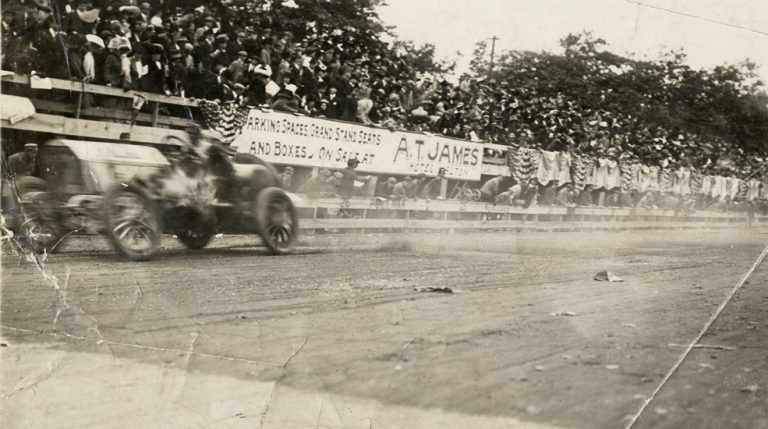 The Quaker City Motor Club sponsored automobile endurance races on area roads. From 1908 to 1911, the club organized a two-hundred-mile race on an eight-mile course through Fairmount Park for American-manufactured automobiles with stock chassis. The event attracted local drivers such as brewer Erwin Bergdoll (1890–1965) as well as nationally known racers, including George Robertson (1884–1955) and Louis Chevrolet (1878–1941). City leaders debated the benefits of these races, and the Fairmount Park Commission suspended all racing in 1912 after concluding that motor races endangered participants and encouraged recklessness among the city’s automobilists. 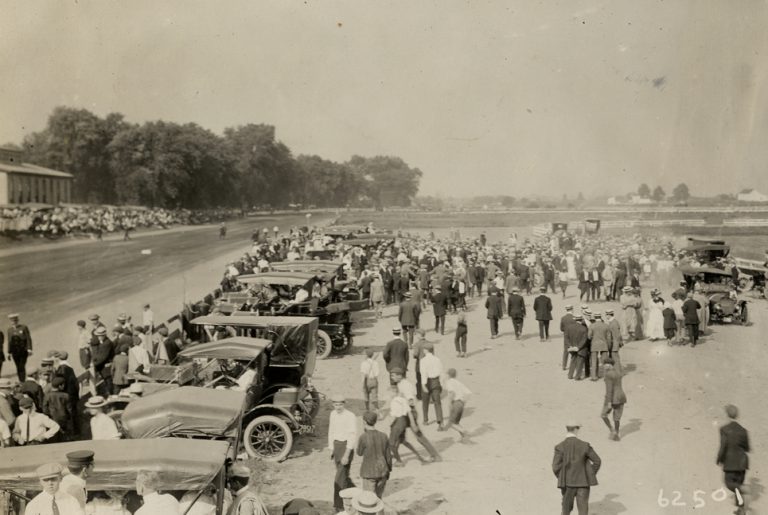 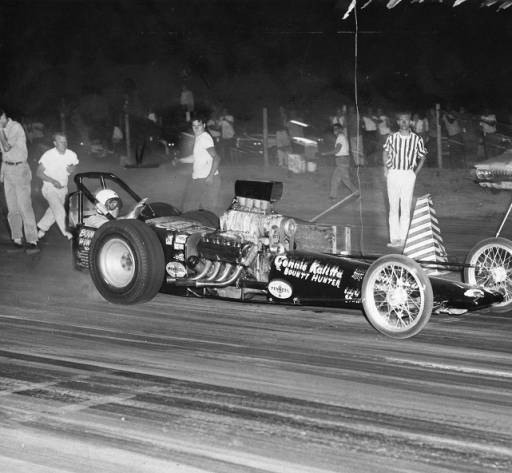 Drag racing is a form of auto racing that features two cars racing on a short straight quarter-mile track, with the goal of being the first to cross the finish line. Drag racing emerged as a race style in the 1930s once car engines advanced to pass the 100-mph barrier. Following World War II, drag racing spread across the United States helped by the formation the National Hot Rod Association (NHRA) in 1951, which added a level of organization and credibility to the races. In the 1960s further technological advances introduced electronics to drag racing to make the timing of races from start to finish more precise.

In New Jersey, the Atco Raceway, organized by the South Jersey Timing Association, opened in 1960 and remains an active drag way today. With a focus on short distance speed, drag racing cars have a much different shape than cars used for racing extended distances. An example of a drag racing car is shown here at the Atco Raceway in 1962. 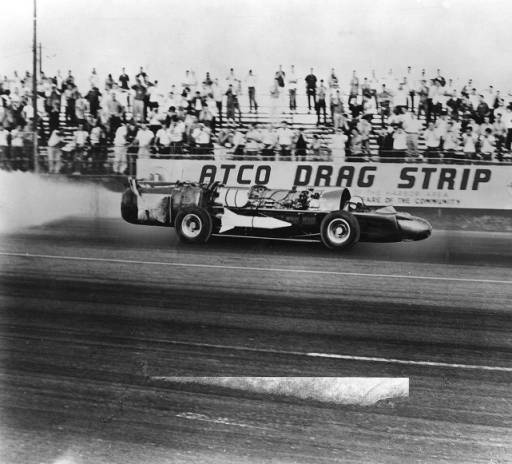 Arthur Eugene “Art” Arfons (1926–2007) was the three-time holder of the world land speed record from 1964 to 1965. Arfons began experimenting with the idea of jet-powered cars in 1962 with the construction of the Cyclops. The Cyclops reached 330 miles per hour and remains the fastest open cockpit vehicle. The Cyclops gained notoriety across the nation as Arfons showcased his vehicle at various drag ways, one of these stops at the Atco Raceway is shown here in 1962. 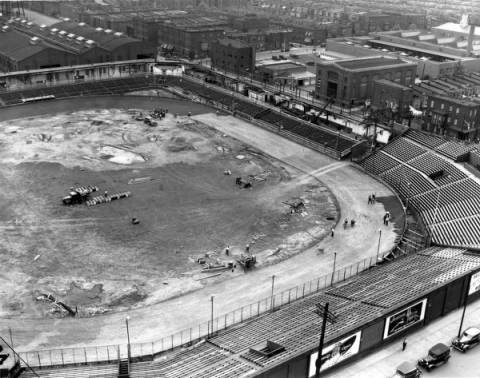 The Baker Bowl, initially built in 1887 as a baseball stadium for the Philadelphia Phillies, originally seated 12,500 people and at one time featured a sloping bicycle track around the outfield. The Baker Bowl represented a major advance in stadium design, as its construction employed brick as well as wood. The Phillies left the Baker Bowl following the 1938 season, which provoked a move to reuse the stadium as an auto racing track. The conversion of the Baker Bowl, shown here in 1939, into the National Speedway for midget car racing lasted until World War II, when gas rationing forced the end of recreational racing. The Baker Bowl/National Speedway was demolished in 1950. 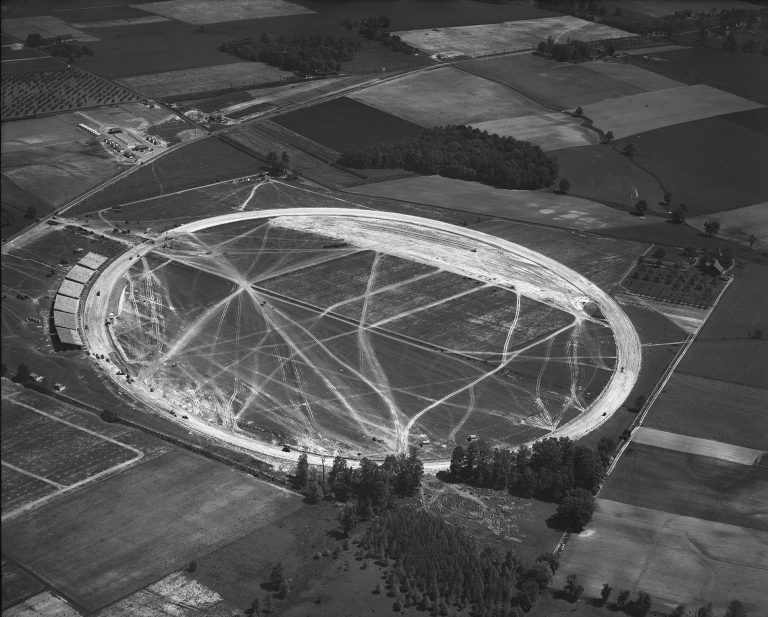 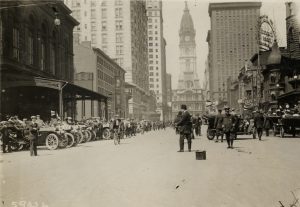 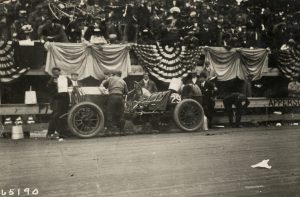 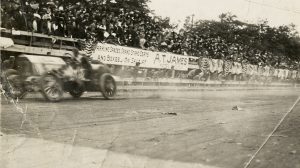 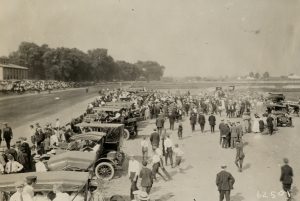 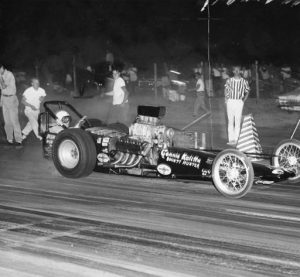 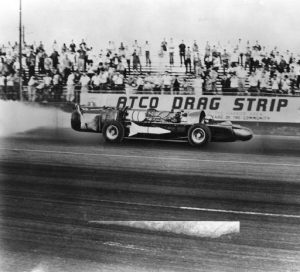 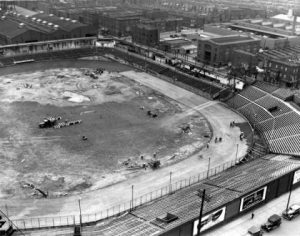 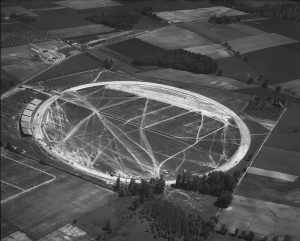