Library buildings funded by the Pittsburgh industrialist Andrew Carnegie (1835-1919) played an important role in the development of library systems in Philadelphia and the surrounding region. Carnegie funded many libraries, including twenty-four branches of the Free Library of Philadelphia, which greatly increased the availability of library services to the public. Many of the libraries funded by Carnegie continued to serve the public in the twenty-first century.

In the nineteenth and early twentieth century, the majority of public libraries were subscription libraries, which required membership fees to gain library privileges. This led to only wealthier members of society having access to books. Carnegie, who had little formal education and could not afford the fee for a subscription library, gained access to books for self-study and developed a love for literature because a local philanthropist in Pittsburgh opened his library to young working men. Carnegie agreed with the prominent belief of the time period: that reading good books would lead to good behavior and that public libraries would contribute to progress and social order. This belief, his own learning through reading, and his conviction that no man should have excess wealth, led him to create a program through which communities could request funds for libraries. Eventually 1,689 of these libraries, referred to as Carnegie Libraries, were founded throughout the United States and other English-speaking countries.

The program began in 1886, when Carnegie donated funds for a library building and community center to Allegheny, near Pittsburgh. Towns and cities applying for a library grant were required to demonstrate the need for a library, provide a building site, and promise to provide ongoing support for books, upkeep, and staff with taxes equal to no less than 10 percent of the library grant. While some criticized Carnegie for not providing endowments or books to the libraries, this ensured that the community supported the library and fostered a sense of ownership and responsibility.

In 1903, the librarian of the Free Library of Philadelphia applied to Carnegie for funding to create thirty branch libraries with an estimated cost of $20,000 to $30,000 for each branch. The Free Library had opened in 1894, and by 1898 the library system had 160 employees, fourteen branches, and 250,000 volumes. However, none of the system’s libraries had a purpose-built library building, and many operated in poor conditions without enough space.

Carnegie agreed to provide $50,000 for each of the Free Library’s branches, more than requested, based on his experience funding branch libraries in Pittsburgh and New York City. In 1904, the City Council accepted Carnegie’s offer, but only twenty-five libraries were built, due to rising costs of building construction over the decades it took to erect the branches. Each branch was designed to be suitable to each neighborhood in outward appearance, and under the direction of Carnegie’s secretary James Bertram (1872-1934) the branch libraries in Philadelphia had a significant impact on the layout of other Carnegie library buildings. Many were T-shaped with an open plan, contained flexible spaces for public lectures or events, and had open stacks that allowed patrons to browse books, which was uncommon in the early twentieth century.

Although the Midwest received the largest portion of libraries funded by Carnegie, the program funded fifty-nine library buildings in Pennsylvania and thirty-six in New Jersey (Delaware is one of two states that received no funding). In Philadelphia and the surrounding region, many agreed with Carnegie’s belief that libraries would allow for self-improvement, but others complained about the struggle to find an appropriate building sites or the ongoing costs related to the libraries. Others complained about lack of specific genres, such as a nine-year-old girl from New Jersey who wanted more fairy tales.

Many of the libraries funded by Carnegie in the Philadelphia region continued to operate in the twenty-first century, including fifteen of the original Free Library of Philadelphia branch locations. Some — notably the Camden Free Public Library built in 1905 — deteriorated to ruin, while others found new uses. In Philadelphia, the Germantown branch became a senior citizens center, and the Manayunk building became a nursing home.

Carnegie Libraries greatly impacted the Philadelphia region by providing the much-needed funding for library buildings, which allowed for the creation of new library systems as well as the expansion of the Free Library of Philadelphia.

Cassie Brand is Curator of Rare Books at Washington University in St. Louis. Her research focuses on the history of the book as a physical and cultural object, collecting history, and library history. (Author information current at time of publication.) 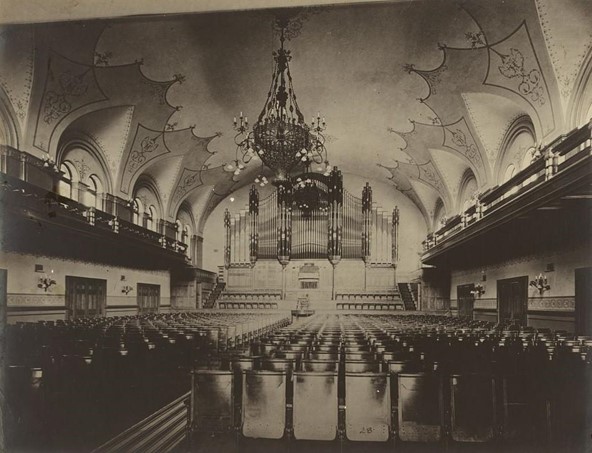 Andrew Carnegie (1835–1919) made several special grants in Pennsylvania that funded libraries and community centers. Allegheny, Braddock, Carnegie, and Homestead each received grants in amounts ranging from $254,000 to $357,782. The community centers attached to the libraries allowed for a variety of additional services, including swimming pools, gymnasiums, billiard rooms, and music halls. Allegheny, Pennsylvania, used their special grant to build the music hall shown in this 1890 photograph. 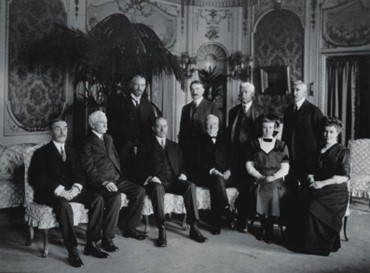 James Bertram (1872–1934), Andrew Carnegie’s (1835–1919) secretary, oversaw the application process for the library program. He corresponded with organizations requesting funds and approved all library plans to ensure they stayed within budget. Carnegie based his funding decisions on Bertram’s recommendations, rarely asking questions and providing money for the approved libraries freely. This photograph depicts the first board meeting of the Carnegie Corporation, founded to promote education and the spread of knowledge. Carnegie is seated fourth from left, while Bertram stands behind him. 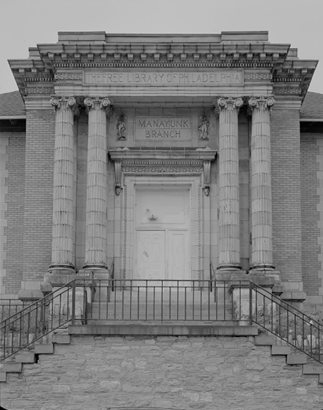 Former Manayunk Branch of the Free Library of Philadelphia

In 1904, Philadelphia’s City Council accepted an offer by Andrew Carnegie (1835–1919) to provide $50,000 for building each of the thirty planned Free Library of Philadelphia branches. The Manayunk Branch, designed by Philadelphia architect Benjamin Rush Stevens, was completed in 1908. Shown here in this 1933 Historical American Building Survey photograph, the branch was the tenth of twenty-five libraries ultimately established from Carnegie’s endowment. It provided free, egalitarian access to knowledge until it was sold in 1969 and became a senior citizens’ center. It was subsequently converted into a condominium development. 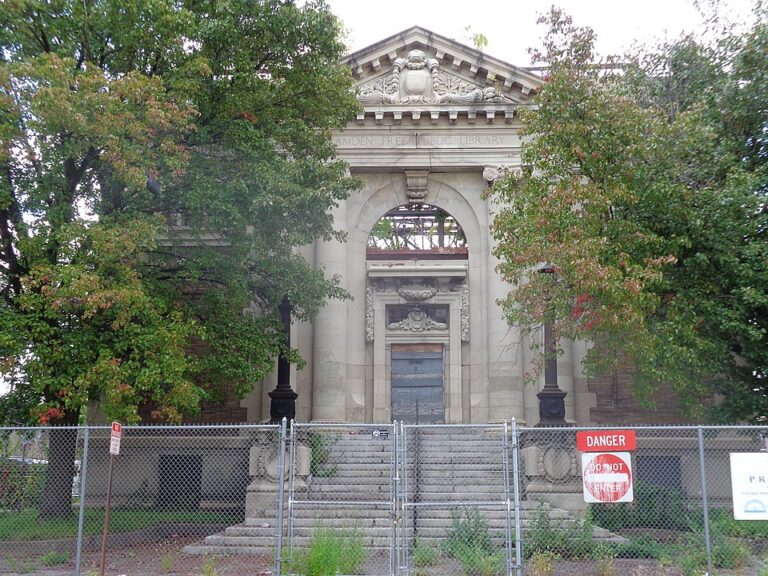 The Camden Free Public Library was one of the 1,689 libraries Andrew Carnegie (1835–1919) helped to establish throughout the United States and other English-speaking countries. Carnegie granted $140,000 for the construction and furnishing of the Camden Free Public Library, and it opened its doors on June 27, 1905. The library served the city’s residents until 1986, when the library relocated to the South Jersey Gas, Electric, and Traction Company Office Building on 418 Federal Street. The original building was placed on the National Register of Historical Places in 1992. However, it remained empty into the twenty-first century. 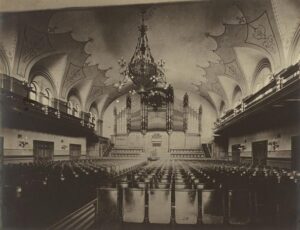 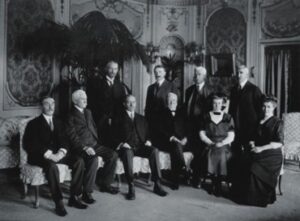 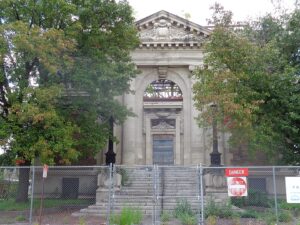 Wiegand, Wayne A. Part of Our Lives: A People’s History of the American Public Library. Oxford: Oxford University Press, 2015.