Observed on the second Monday in October, Columbus Day in the Philadelphia region gained prominence as Italian immigrant communities grew in the late nineteenth and early twentieth centuries. By commemorating the 1492 arrival of Christopher Columbus (1451-1506) in the New World, Italian-Americans embraced the navigator as their countryman, celebrated Italian culture, and called attention to their American loyalty and identity. While the practices and places for observing Columbus Day changed over time, the holiday in Philadelphia and its suburbs retained a distinctively Italian flavor even as Columbus became a controversial figure in American history.

The first major anniversary of Columbus to be celebrated in the United States, 1792, passed quietly in Philadelphia although not without notice. While Boston and New York hosted public events, in Philadelphia the nationally circulated Daily American Advertiser published an oration about Columbus delivered earlier at Princeton College in New Jersey.

The reputation of Columbus as an American hero grew during the nineteenth century following the 1827 publication of The Life and Voyages of Christopher Columbus, by Washington Irving. It was not until the 1860s, however, that Columbus Day emerged as an annual celebration among Italian immigrant communities, first in New York in 1866 and in Philadelphia by 1869. That year, the Societá di Unione e Fratellanza Italiana, a mutual aid society in South Philadelphia, held the first in a series of annual balls on October 12 and made honoring Columbus one of its central activities. In 1876, Italian-Americans dedicated a monument of Columbus in Fairmount Park as their contribution to the Centennial celebration of the United States.

Italian-Americans embraced Columbus because of the place of his birth, the city-state of Genoa, within the region that became part of the Italian nation formed in 1861. Although Columbus’s birthplace has at times been debated by scholars and others, nineteenth-century immigrants to the United States did not question their shared heritage with the “discoverer” of America. They also identified with Columbus on the basis of shared religion, and the Catholic Church became a major proponent of commemorating Columbus for his role in extending Catholicism to the New World.

The ethnic and religious character of the holiday was clear in Philadelphia in 1892, the four-hundredth anniversary of the first Columbus voyage, which came in the midst of a surge of Italian immigration. In addition to celebrations in Italian neighborhoods, the Columbus commemoration activities that year included a torchlight parade of Catholic organizations on Broad Street, a Solemn Pontifical Mass at the Cathedral on Logan Square, and a performance by parochial schoolchildren at the Academy of Music.

As an expression of American identity, Columbus Day had a patriotic spirit that combined with its ties to religion and ethnicity. As state governments began to grant legal status to the holiday in the first decades of the twentieth century, participation widened to include public officials, office-seekers, and military units. Patriotic overtones were especially apparent in Philadelphia during the Cold War era as parades and ceremonies at Independence Hall from the 1950s through the 1970s symbolically linked the arrival of Columbus in America with the founding of the republic.

Monuments to Christopher Columbus have anchored and sometimes shifted the location of Columbus Day observances. The Columbus monument dedicated in Fairmount Park in 1876 served as a focal point for commemoration for the next century, until the statue was moved to Marconi Plaza in South Philadelphia during the bicentennial year of 1976. Following its dedication there by Mayor Frank Rizzo (1920-91), the monument’s new location in the city’s traditionally Italian neighborhood became the destination of the annual Columbus Day parade. In Camden, a Columbus monument erected in 1915 by the Sons of Italy in Forest Hill Park (later renamed Farnham Park) played a similar role as a site of commemoration in the first half of the twentieth century. A Columbus monument in Norristown, Pennsylvania, dedicated in 1992 after years of effort, from that point forward became the centerpiece for celebration each year in the Montgomery County seat.

By the time of the five-hundredth anniversary of the first Columbus voyage in 1992, celebrating the navigator became more controversial and contentious. When the Philadelphia City Council voted in 1989 to rename a portion of Delaware Avenue as Columbus Boulevard, Native Americans protested that Columbus represented conquest of their land and neighborhood groups resisted the loss of a familiar street name. In 1992 Penn’s Landing gained a new, modern obelisk to honor Columbus, but on the day of its unveiling a group dressed as Native Americans splattered the monument with red paint and painted over “Columbus Boulevard” street signs.

While the history and reputation of Columbus became a matter of national and international debate, the region’s tourism promoters sought to draw visitors with a year of events called “Neighbors in the New World,” to emphasize multicultural unity and progress. Many museums and organizations embraced the theme, but others such as the annual American Indian Arts Festival at the Rankokus Reservation in Burlington County, New Jersey, stressed the cultural traditions that Columbus’s arrival endangered.

Adding to the layers of layers of multiculturalism and conflict attached to Columbus Day by the early twenty-first century, monuments to Columbus became flashpoints of controversy during the social justice uprisings of 2020. Camden removed its Columbus monument from  Farnham Park, and demonstrators converged on the monument in South Philadelphia to protest its presence while others assembled to protect it. The City of Philadelphia enclosed the monument in a box until its future could be determined. Defenders of the monument echoed the continuing tradition of Columbus Day in South Philadelphia as a celebration of Italian heritage and the contributions of immigrants to Greater Philadelphia and the nation. 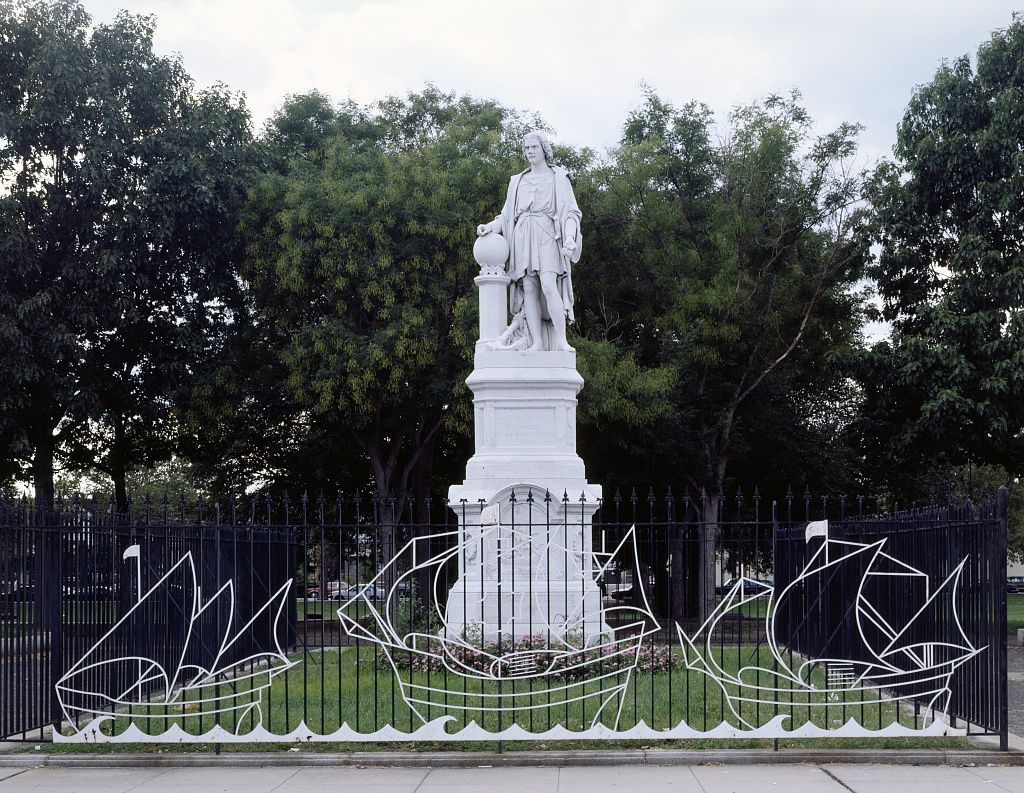 This statue of Christopher Columbus has served as a focal point for Columbus Day celebrations since it was first dedicated in Fairmount Park in 1876. Sculptor Emmanuelle Caroni is credited with designing the monument, depicting a globe at the explorer’s right hand, a map in his left, and an anchor at his feet representing Columbus' career as a navigator. In 1976, the statue was relocated to Marconi Plaza in South Philadelphia, a position closer to the city's traditionally Italian neighborhood and a site where it could be better integrated into the city's Columbus Day parade. This 1990s image of the statue in Marconi Plaza by photographer Carol M. Highsmith also shows artistic renditions of the Niña, Pinta, and Santa María on the fence surrounding the statue. 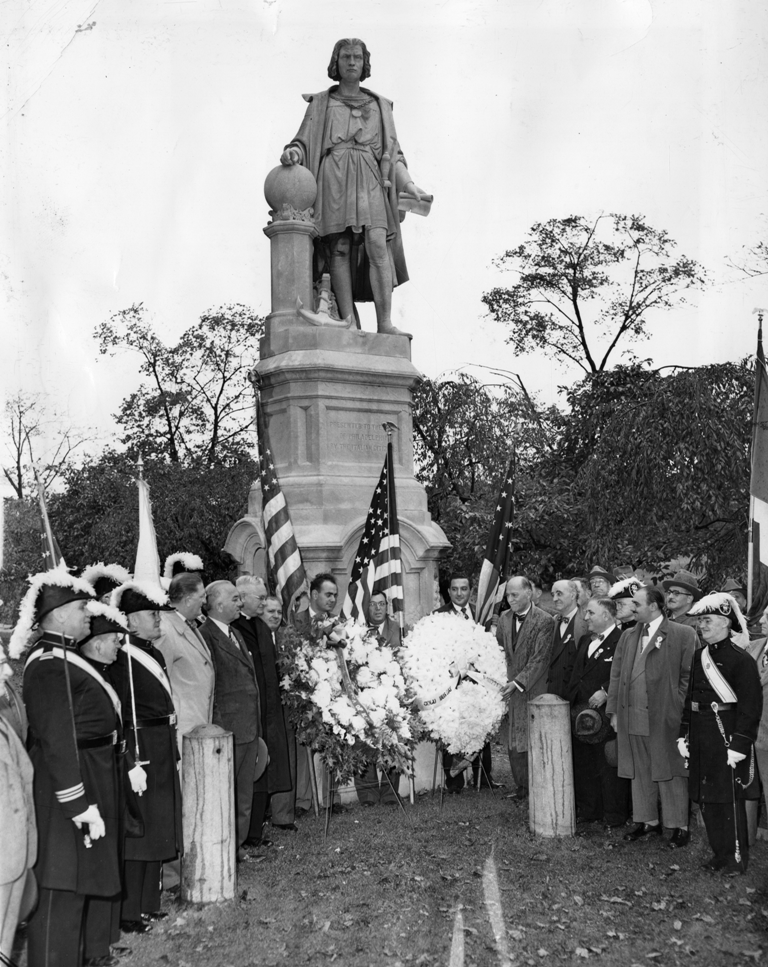 The Knights of Columbus at Fairmount Park

The Philadelphia chapters of the Knights of Columbus gather annually for parades and festivities to honor Christopher Columbus, their organization’s namesake, on Columbus Day, the holiday the group helped establish. The Knights of Columbus began in Connecticut as a Catholic fraternal organization to support families through charitable services. The earliest councils appeared throughout Connecticut in 1882 and the first of more than thirty Philadelphia councils was organized in 1896. In the early twentieth century, the Knights of Columbus expanded and began to push local and state governments to make October 12, the suggested date of Columbus’ landing in the New World, an official holiday. Pennsylvania and New Jersey had both passed resolutions declaring Columbus Day an official holiday by the time President Franklin D. Roosevelt proclaimed October 12 a national holiday in 1937. Pictured here on October 12, 1950, representatives from Philadelphia's Knights of Columbus councils conduct a ceremony in front of the Columbus statue in Fairmont Park. Some members wear the plume hats, swords, and sashes that represent the official regalia of their organization. 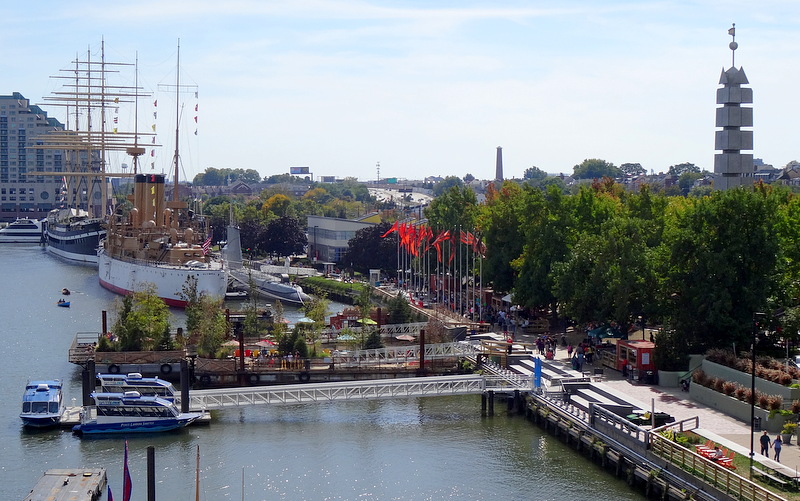 Rising over the trees at right in this image of Penn's Landing in Philadelphia is a stainless steel obelisk, originally unveiled in 1992 to honor the 500th anniversary of Christopher Columbus' voyage across the Atlantic Ocean. Philadelphia architectural firm Venturi, Scott Brown & Associates designed the monument to reflect the appearance of classical Italian obelisks, and it was positioned between Penn's Landing and Columbus Boulevard. In addition to inscriptions on the obelisk's granite base, visual motifs such as a compass rose (at the base of the obelisk) and a flag displaying the country colors of both Italy and Spain (at the top of the obelisk) incorporate elements of Christopher Columbus' life into the sculpture. (Photograph by Donald D. Groff for the Encyclopedia of Greater Philadelphia.) 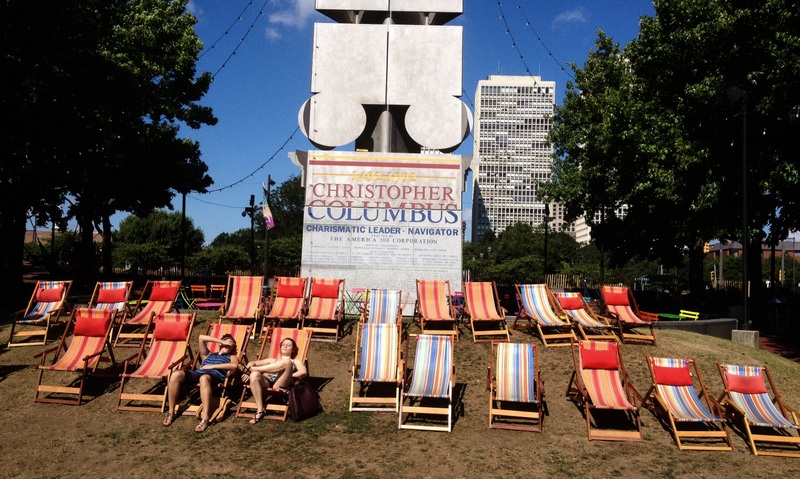 Base of the Christopher Columbus Monument

During summer 2014, the Delaware River Waterfront Corporation and local business partners transformed the areas adjacent to the Christopher Columbus obelisk and the Penn's Landing Marina into the Spruce Street Harbor Park. This temporary pop-up park featured a beer garden and restaurant on floating barges, amusements, a mist walkway, an urban beach, and a variety of lounging options. Visitors could recline on hammocks strung between the trees of Penn's Landing, at patio tables with umbrellas, or on the beach chairs (shown here) arranged around the Columbus monument. (Photograph by Donald D. Groff for the Encyclopedia of Greater Philadelphia.) 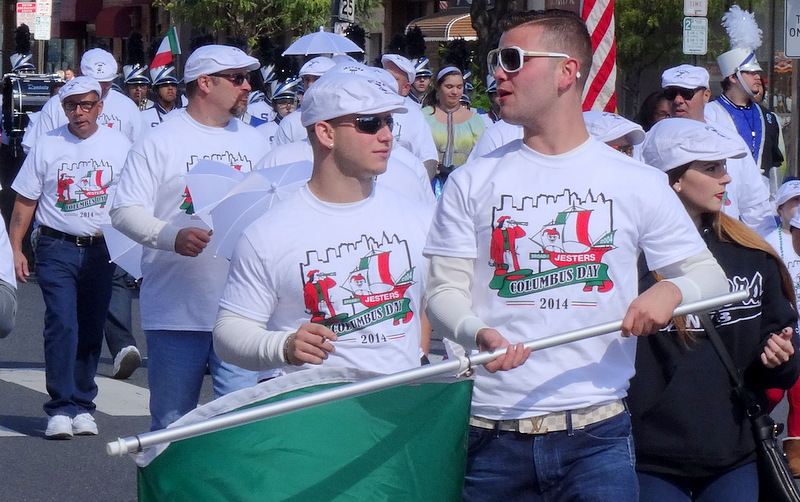 Columbus Day weekend in Philadelphia is not just a celebration of Christopher Columbus, but also of all things Italian. South Philadelphia, the heart of Philadelphia's Italian-American population since a surge of immigration in the late 1800s, retains its Italian identity, though it shares its territory now with many other immigrant groups. In this photograph, members of the Jesters New Year's Brigade march down Broad Street on October 12, 2014, during the annual Columbus Day Parade. Dozens of organizations, many with members who have an Italian-American heritage, take part in the parade, which ends with a festival at Marconi Plaza. (Photograph by Donald D. Groff for the Encyclopedia of Greater Philadelphia) 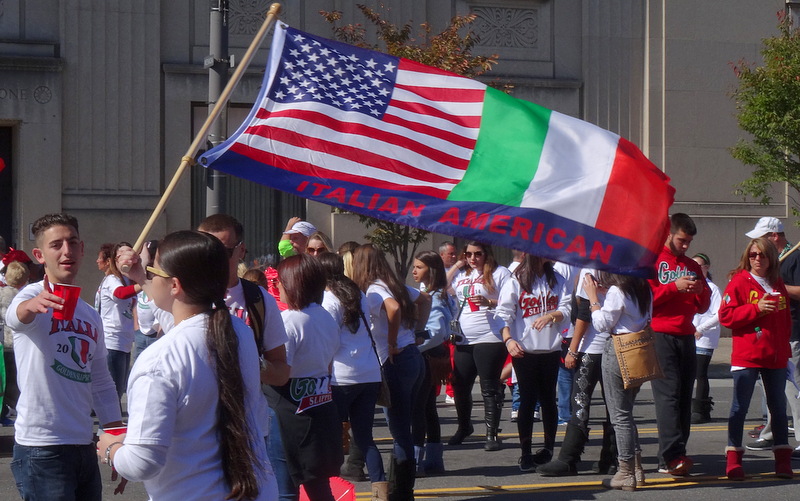 Philadelphia's Columbus Day parade is as much a celebration of Italian-American heritage as it of the history of Christopher Columbus—perhaps more so, given that so many of the marchers are there in support of the Italian-American community. The parade ends at Marconi Plaza, a park deep in South Philadelphia that is named after another famous Italian, Guglielmo Marconi, pioneer of long-distance radio. The parade culminates in a sprawling festival where dozens of restaurant and catering vendors offer authentic Italian cuisine, partaken by thousands as Italian-inflected music fills the air. Here, a group taking part in the parade of October, 12, 2014, awaits its turn to move forward toward the reviewing stand at Marconi Plaza. (Photograph by Donald D. Groff for the Encyclopedia of Greater Philadelphia) 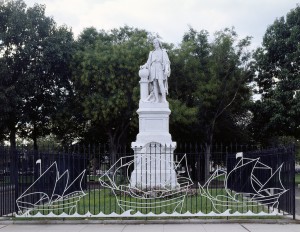 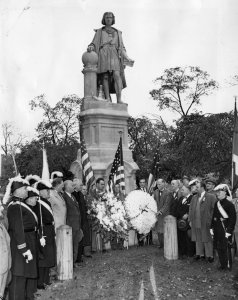 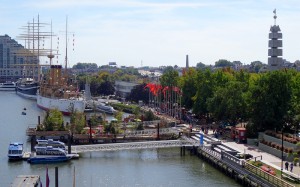 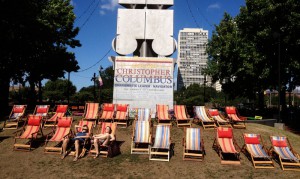 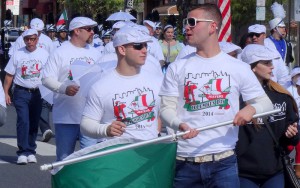 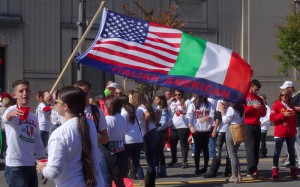