As death stalked the city, unembalmed bodies piled up by the dozens in a lone morgue at Thirteenth and Wood Streets. The extreme circumstances of the pandemic also meant, however, that many bodies simply rotted for days in the streets. Eventually five makeshift morgues, including one at a cold-storage facility on Cambridge and Twentieth Streets, were established to meet the deluge of corpses. Cemeteries lacked the space and manpower to adequately bury the dead, too. At Holy Cross Cemetery in Lansdowne seminarians turned grave-diggers took in an average of 200 bodies a day in October and deposited hundreds of coffins into a large common grave. “On one occasion,” recalled Reverend Thomas C. Brennan of St. Charles Borromeo Seminary, “the students worked on this task until 10:30 p.m. by the light of the October full moon, the long rows of coffins in the trench presenting a weird and impressive picture in the moonlight.” 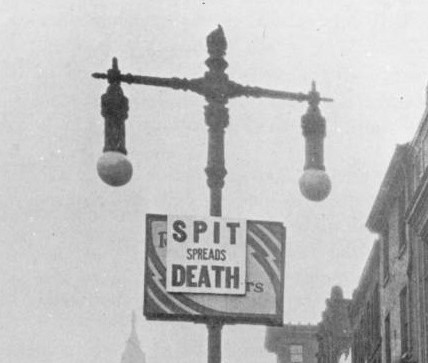 Philadelphia Fights Back Against the Epidemic

To combat the influenza epidemic, Philadelphia enacted an extensive anti-spitting ordinance. Practitioners were unclear about the cause of the flu, but they knew that it was an airborne disease and therefore instituted a public campaign against coughing, sneezing, and spitting in public. The Philadelphia Board of Health posted signs like this one in public places and inside public transport vehicles toward the end of 1918 and distributed pamphlets instructing citizens to use handkerchiefs while coughing. Several public places like churches, shops, and libraries closed, but most that remained open displayed such signs. The city’s ordinance made spitting a criminal offense – those found spitting without covering their mouths were fined $2.50 and sometimes even arrested. 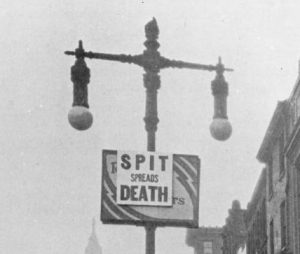 Brennan, Thomas C. “The Story of the Seminarians and their Relief Work during the Influenza Epidemic.” Records of the American Catholic Historical Society of Philadelphia 30 (2) (June, 1919): 115-177.