In the years prior to the election, Catto had worked to help the nation realize its founding democratic vision through actions to increase educational opportunities, desegregate trolley cars, increase voting opportunities for African Americans, and (as a notable local athlete) to integrate baseball. Fierce opposition to Catto’s activism and the general progress of African Americans contributed to his eventual murder.  At the time of the election, he was an instructor at the Institute for Colored Youth (later Cheyney University), at Sixth and Lombard Streets. In a twist of tragic irony, he beseeched Mayor Daniel Fox (1819-90) to consider providing greater protection to Black voters. He and his colleagues decided to close the Institute early due to risks to staff and students.

Catto also was a major and inspector general of the 5th Brigade, 1st Division of the National Guard of Pennsylvania, a position that required him to have a horse, sword, and sidearm (pistol). On this Election Day, he went to the Philadelphia branch of the Freedmen’s Bank (a powerful symbol of Black empowerment through cooperative economics) at 919 Lombard to withdraw twenty dollars to purchase a gun. On his way there, he encountered white attackers, whom he narrowly escaped. Shortly thereafter, Catto met with his friend Cyrus Miller and the two traveled to a pawnshop on Walnut Street where Catto purchased a six-shot revolver.

Aaron X. Smith is a Ph.D. candidate in the African American Studies Department at Temple University.  He holds a B.A. in Asian Studies, an M.A. in Liberal Arts, and an M.A. in African American Studies. He has publications accepted in The SAGE Encyclopedia of African Cultural Heritage in North America on the subjects of “Running Away as Resistance to Slavery,” “Maleness, Masculinity and Manhood,” and “Black Classics Press.” (Author information current at time of publication.) 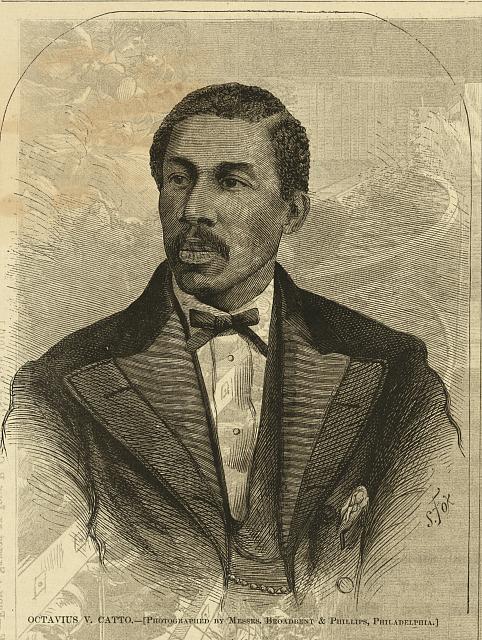 Although Philadelphia was a center for abolitionism in the nineteenth century, the city still had restrictive laws and segregated practices that harmed working-class African Americans. Octavius V. Catto fought against laws that prohibited African Americans from riding railways, segregated education within the city's schools, and limited the right of African Americans to vote. Catto was born, free from slavery, on February 22, 1839, in South Carolina. His family moved to Philadelphia when he was five years old, as his father became the minister of the First African Presbyterian Church. Catto attended a number of segregated public schools, briefly attended an all-white middle school in Allentown, New Jersey, and finished his education at the The Institute for Colored Youth (the precursor to the current Cheyney University). Catto was the fourth student to graduate from the Institute in 1858, and within a year became a lecturer there. The Institute was a prominent center for the African American intellectual community in the greater Philadelphia area, and Catto used his position to become deeply involved with the African American community. Catto focused his career on educating members of the community and strived to help African Americans progress in a culture that was heavily prejudiced against them. During the Civil War, Catto helped organize eleven regiments of the United States Colored Troops and was elevated to the rank of major.

After the Civil War, Catto became involved in civil rights on the state level. Catto served as the secretary of the Pennsylvania Equal Rights League and vice president of the State Convention of Colored People in 1865, and joined the Equal Rights League in Harrisburg in 1866. Through these positions he was able to meet with state officials and his peers to discuss legal changes that would allow the state's African Americans to gain better public services, more voting access, and nonsegregated educational services. In March 1867, a law was passed that prevented transportation operators from ejecting passengers based on their skin color. Just three days later, the law was tested as Catto's fiancee, Caroline LeCount, was refused service on a horsecar. The state law was upheld and the conductor was arrested and fined for his actions. Voting restrictions on African Americans were legally prevented with the ratification of the 15th Amendment of the United States Constitution in 1870. Catto would not live to see Pennsylvania's passage of a law that legally ended segregation of schools in 1881 (although Philadelphia's schools remained segregated by custom for decades afterwards.)

Catto was shot on Election Day, October, 10, 1871. Groups of white Democrats (including a number of police officers) attempted to intimidate the black population of Philadelphia from voting by harassing them on their way to the polls. Catto was walking down South Street when he was confronted by a white male, later identified as Frank Kelly, and the confrontation ended when Catto was shot three times. 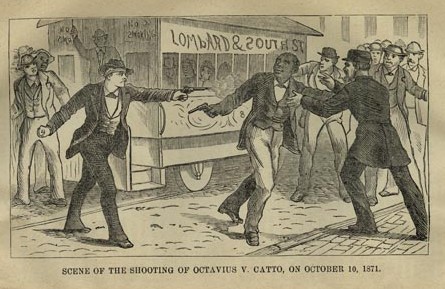 The Murder of Octavius V. Catto

Just a block away from his home at 814 South Street, Octavius Catto was shot and killed by Frank Kelly around 3:30 p.m. on October 10, 1871, another incident of tumultuous violence spurred by differing political and social beliefs on Philadelphia's Election Day. With no verbal interaction between them, Kelly fired at Catto in front of a crowd of witnesses. Catto attempted to hide behind a nearby streetcar, but he quickly died before a nearby police officer could reach the group. It took years before Kelly was caught and put on trial for his crime. Kelly went on trial for the murder of Catto in April 1877, and this image is from a pamphlet, published soon after, transcribing the testimony in the case. The trial lasted eight days and dozens of witnesses testified, but Kelly was acquitted of all charges. 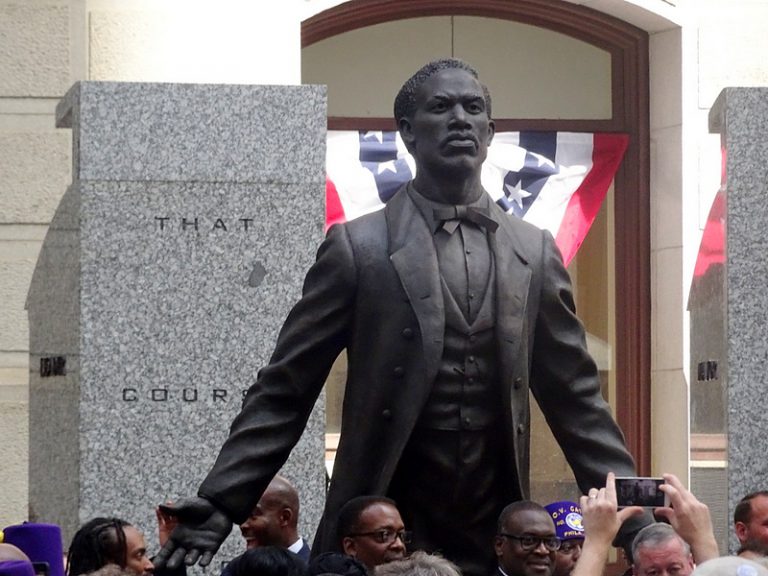 Octavius Catto memorial moments after it was unveiled outside City Hall on September 26, 2017. (Photograph by Donald D. Groff for The Encyclopedia of Greater Philadelphia) 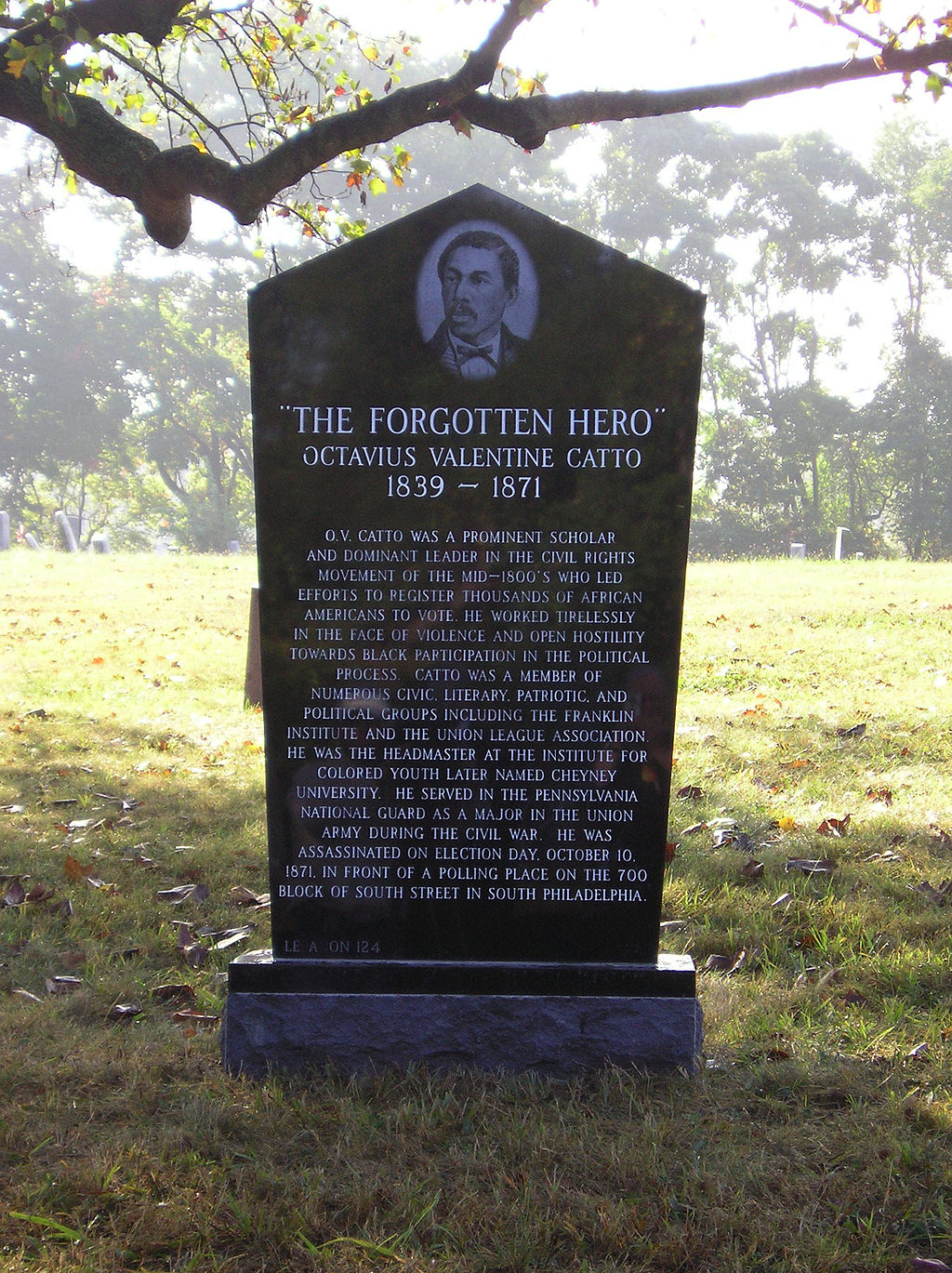 Octavius V. Catto's funeral offered thousands of people from across the country the chance to mourn a public figure who fought for the civil rights of African Americans on multiple fronts throughout his lifetime. Students, faculty, and graduates from the Institute of Colored Youth; preachers; politicians; regimental guards; and 5,000 other mourners observed the funeral procession, which ended at Lebanon Cemetery near present-day Passyunk Avenue and 18th Street. After Lebanon Cemetery was closed, Catto's remains were moved in 1903 to Eden Cemetery in Collingdale, about six miles west. For more than a hundred years, only a small gravestone with Catto's name and the years of his birth and death marked his burial site. The gravestone pictured here was purchased by members of the Octavius V. Catto Memorial Fund and installed atop Catto's grave on October 10, 2007, the 136th anniversary of his death.

"O.V. Catto was a prominent scholar and a dominant leader in the civil rights movement of the mid-1800's who led efforts to register thousands of African Americans to vote. He worked tirelessly in the face of violence and open hostility towards black participation in the political process. Catto was a member of numerous civic, literary, patriotic, and political groups including the Franklin Institute and the Union League Association. He was the headmaster at the Institute for Colored Youth later named Cheyney University. He served in the Pennsylvania National Guard as a major in the Union Army during the Civil War. He was assassinated on Election Day, October 10, 1871, in front of a polling place on the 700 Block of South Street in South Philadelphia." 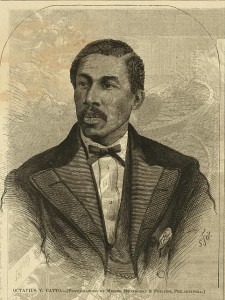 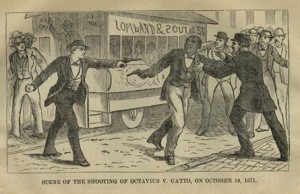 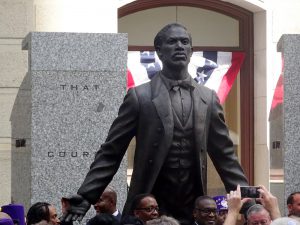 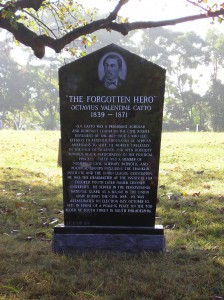 Casway, Jerrold. “Octavius Catto and the Pythians of Philadelphia.” Pennsylvania Legacies, May 2007: 5-9.

“Our Alma Mater: An Address Delivered at Concert Hall on the Occasion of the Twelfth Annual Commencement of the Institute for Colored Youth” (May 1864).