The origins of the museum date to 1907, when the Rev. W. Herbert Burk  (1867-1933), an Episcopal priest, sought to honor George Washington (1732-99) and the importance of the American Revolution by constructing the Washington Memorial Chapel at Valley Forge, which at its completion included a small museum holding several significant artifacts. In 1909, Burk added to the museum’s stature by buying George Washington’s marquee (war tent) from Mary Custis Lee (1807-73), great-granddaughter of Martha Washington (1731-1802). Lee chose Burk over others who bid for the tent because it had been used in 1777-1778 during Washington’s Valley Forge encampment. Nine years later, Burk established the Valley Forge Historical Society, which expanded the museum by adding an extensive and distinguished collection of artwork, rifles, swords, sculptures, rare books, and manuscripts. To support the growing collection, in 2000 the historical society created a new nonprofit organization, the Museum of the American Revolution, in Valley Forge to educate visitors about the complex story of the nation’s founding.

Although the historical society proposed in 1999 to construct a new facility in Valley Forge National Historical Park, construction was delayed over concerns about the museum’s projected size and cost. It was not until 2005, when H.F. “Gerry” Lenfest (1930-2018) joined the Board of Directors and then was elected as chairman, that the project started to move forward again. Lenfest was a well-known philanthropist and devoted Philadelphian who loved the city and its history. His belief in creating a museum devoted to the Revolution led him to contribute a considerable amount of financial support to its creation.

In 2007, Lenfest bought seventy-eight acres in Valley Forge for $4.1 million to accommodate the museum as well as a hotel, restaurant, and conference center. However, the bid failed in court after residents objected to the traffic the mixed-use project was expected to bring. Following that setback, Lenfest enlisted Pennsylvania Governor Edward G. Rendell (b. 1944) to identify an alternate site. Their solution was to exchange the seventy-eight acres Lenfest had purchased in Valley Forge for less than an acre at Third and Chestnut Street in Philadelphia, formerly the Independence National Historical Park visitor center.

The new location across from First Bank of the United States and just a few blocks from Independence Hall lent itself naturally to the new museum. Although it constituted some measure of competition to the nearby National Constitution Center, supporters managed to raise funds necessary for its creation. Besides Lenfest’s donation of more than $63 million, the American Revolution Center matched a challenge grant for $40 million set by Lenfest. Other significant donors included SMG, Wawa, the Bank of America Charitable Foundation, and the Church of Jesus Christ of the Latter-day Saints. The Oneida Indian Nations gave $10 million because it wanted the museum to demonstrate the Oneidas’ multiple roles in the Revolutionary War, allying with the revolutionaries, actively aiding the British, or remaining neutral in hopes of securing independence, protection, and trade agreements.

The museum’s design and construction companies observed the stringent zoning and deed restrictions imposed in the historic district and set in place by the National Park Service. A required archaeological survey, which took place between July and October 2014, uncovered 82,000 artifacts dating to Philadelphia’s founding. The artifacts became a part of the museum’s collection, the most notable being the Tryphena bowl, a punch bowl from the eighteenth century. After completing the new building’s foundation in April 2015, workers used a tower crane to lift in large exhibits and objects, including the wood that helped recreate a deck of a privateer ship and the Liberty Tree, as well as the museum’s grand staircase. It took two more years before the museum opened on April 19, 2017, the 242nd anniversary of the Battle of Lexington and Concord.

The permanent exhibit’s central narrative focused on the war’s political and military history, but displays also revealed the subtle social transformation of British subjects into revolutionaries. By featuring not just the military’s viewpoints but also those of women, enslaved African Americans, free Blacks, and Native Americans, the museum provided visitors with a broad social understanding of the war. The museum’s exhibits moved on a snakelike path to show the war’s complexity and messiness. Echoing approaches often found in science museums, the exhibits engaged visitors by asking them, for instance, to consider what role they would have chosen in a particular moment, rather than just presenting them with facts about what happened.

The permanent exhibit opened with “Prologue: Tearing Down the King,” explaining events leading up to the war. Following an account of the Seven Years’ War, visitors encountered a life-size reproduction of the Boston Liberty Tree, the first symbol of resistance against British tyranny. Surrounding the Liberty Tree, which incorporated a fragment from the surviving tree, stood important figures who opposed the British, including Mercy Otis Warren (1728-1814) and Phillis Wheatley (1753-84), just two of the women depicted throughout the exhibits. The second part of the museum, “The Darkest Hour,” progressed from the Battle for New York in the fall of 1776 to the winter at Valley Forge 1777-78. Inside this section at the “Arms of Independence 1775-1783,” visitors could line up to march into battle at the revolutionaries’ front lines for the Battle of Brandywine under heavy fog, gunfire, and rumbling, to protect Philadelphia from falling. In the Oneida Nations Theater, a video explored the experiences of Native American women and children refugees.

The museum’s third section focused on the war’s final years. In “The War at Sea,” visitors could walk on a life-size replica of a privateer ship and learn how sailors persuaded Benjamin Franklin (1706-90) to support voting rights for the poor and how possibly hundreds of women dressed as men to become privateers. In “The War in the South, 1778-1780,”  visitors encountered a central contradiction of enslaved African Americans fighting for the British because of the promise for freedom even as many American patriots sought liberty while continuing to hold slaves.

The last section, “A New Nation,” recounted the United States’ establishment, from the Peace of Paris to the Constitution and the Bill of Rights. Not merely celebratory, this section revealed how some were disillusioned with the new country and its laws. The exhibit suggested that free African Americans never felt free due to racism and prejudice against them and explained how and why Native Americans continued to fight Americans for decades. The exhibit also delved into how, in the 1790s, some women sought to demonstrate they were intellectually equal to men through a growing movement for women’s education. At the end of the exhibits, visitors walked past a wall of portraits of veterans who fought to secure the new nation. Inside the Alan B. Miller Theater, the centerpiece of Rev. Burk’s collection at Valley Forge–Washington’s marquee—drew visitor’s attention through a video about the tent’s journey from the American Revolution to the present. When the video faded, visitors gained a glimpse at the actual tent, a reminder of the role of museums in preserving objects from the past.

In the first year after opening in April 2017, the museum welcomed over 300,000 visitors, including thirty thousand students, a strikingly high number given that the museum charged an admission fee while many other museums in the area of Independence National Historical Park were free. In the second year, the museum received three major awards: a Pennsylvania Museum 2019 Special Achievement Award for Revolution Place; an American Alliance of Museums Award for Sustainability; and an American Association for State and Local History Award for its family-oriented discovery center, Revolution Place. The museum also extended its digital reach by having more than 76,000 followers across Facebook, Twitter, and Instagram in 2019. By bringing the American Revolution to life in an animated fashion through touchscreen displays, re-creations, human-sized recreated spaces, and the hands-on experience in the Revolution Place for younger children, the museum thus establishing itself as a central destination in Philadelphia’s historic district. 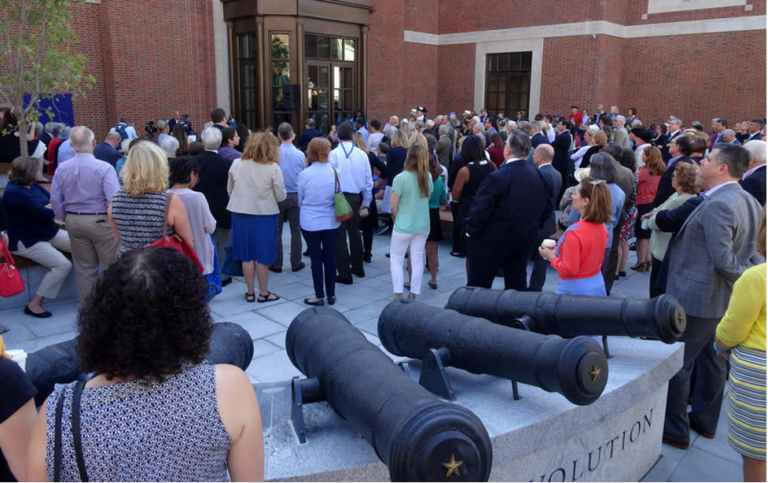 The public dedication of the Museum of the American Revolution’s entry plaza at Third and Chestnut Streets in Old City drew supporters to hear speeches and mingle among reenactors in colonial garb on September 15, 2016. A cluster of five cannons marks the corner of the plaza. (Photograph by Donald D. Groff for The Encyclopedia of Greater Philadelphia) 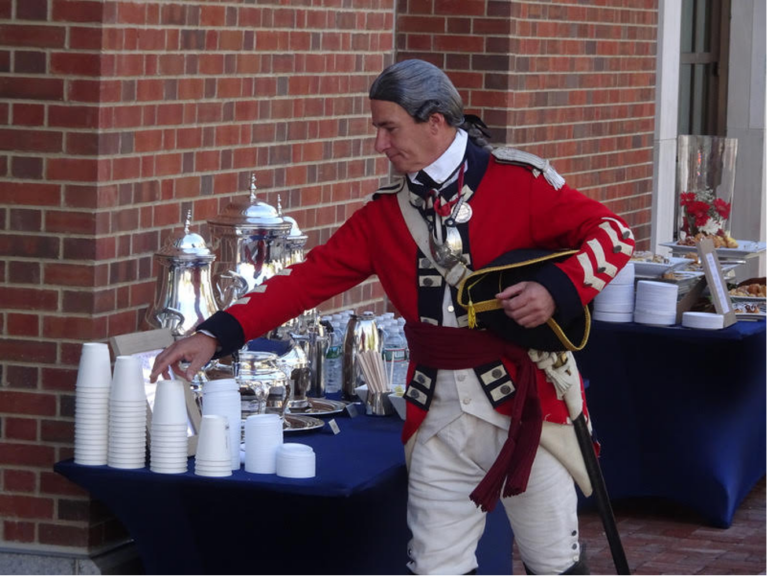 At a Museum of the American Revolution dedication ceremony on September 15, 2016, a smartly garbed reenactor prepares to indulge in a post-dedication coffee service, a sharp contrast to the menial provisions that Washington’s soldiers at Valley Forge would have faced in 1777. (Photograph by Donald D. Groff for The Encyclopedia of Greater Philadelphia) 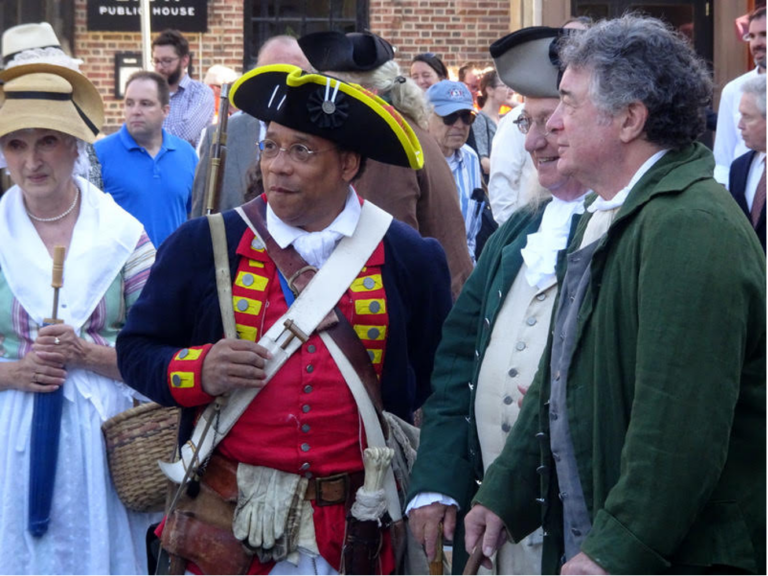 An array of colonial-era reenactors took part in a plaza dedication for the Museum of the American Revolution on September 15, 2016. Posed for photos with museum supporters in the center of this photograph is Noah Lewis, depicting Black hero of the Revolutionary War Edward “Ned” Hector, who during the retreat from the Battle of Brandywine refused to give up his horses, wagon, and armaments. (Photograph by Donald D. Groff for The Encyclopedia of Greater Philadelphia) 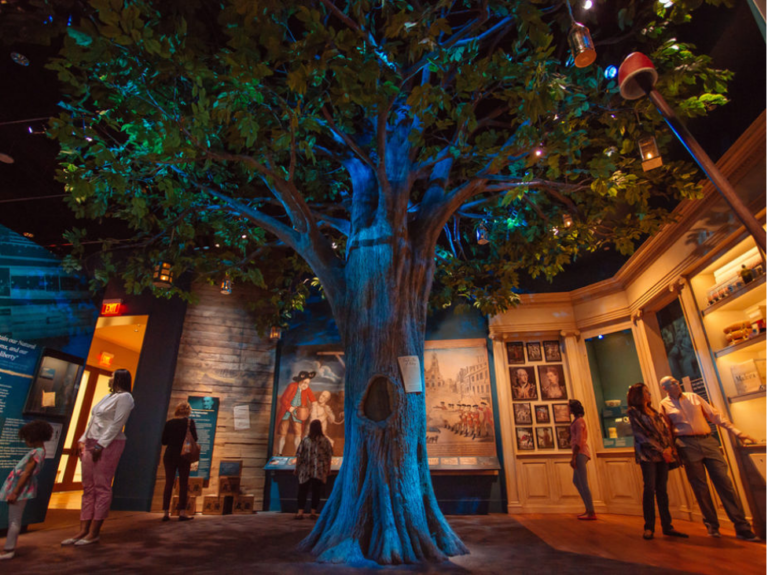 Liberty Tree Exhibition at the Museum of the American Revolution

Liberty Trees, like this 18-foot recreation in the Museum of the American Revolution, were places colonists gathered to discuss the growing tensions between the Colonies and Great Britain. The exhibit is designed to immerse visitors in the dramatic story of the nation’s founding. The decade preceding the Revolutionary War marked a period of intense discussion and debate. The exhibit features broadsides similar to those that colonists posted on Liberty Trees to share important announcements. Period reproduction lanterns made by tinsmiths at Colonial Williamsburg hang from the branches and help evoke the eighteenth century. 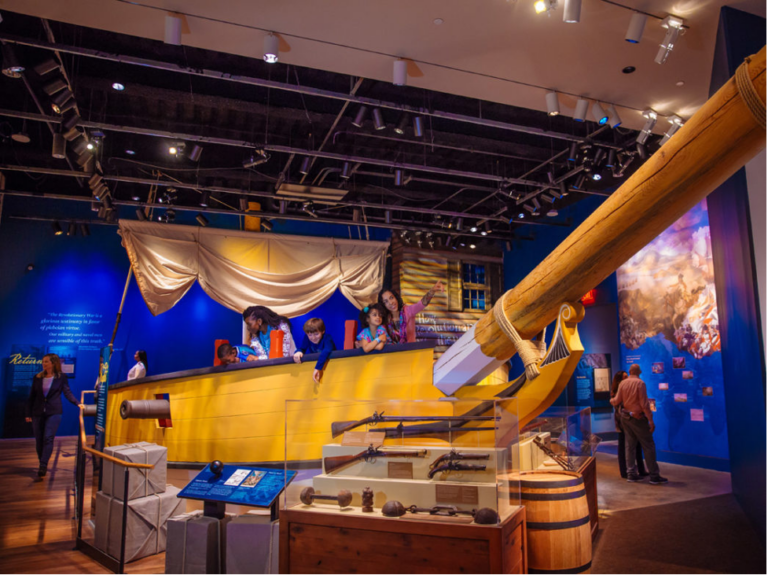 Boston Tea Party Exhibition at the Museum of the American Revolution 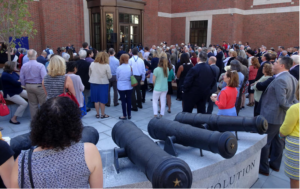 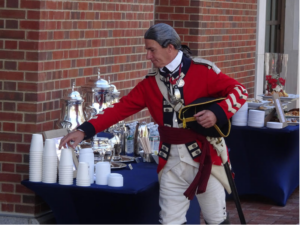 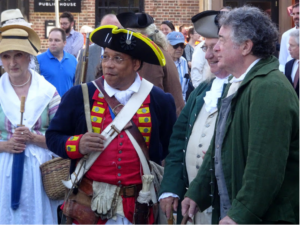 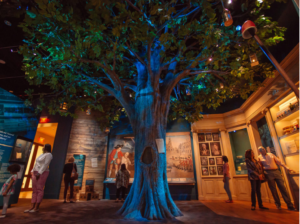 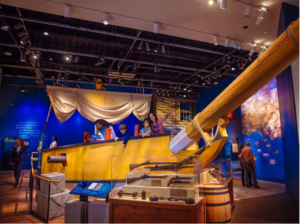 Raphael, Ray. Founders: The People Who Brought You a Nation. New York: The New Press, 2009.

Yamin, Rebecca. Archaeology at the Site of the Museum of the American Revolution: A Tale of Two Taverns and the Growth of Philadelphia. Philadelphia: Temple University Press, 2018.