Soft pretzels are to Philadelphia as crepes are to Paris. Both are icons of their respective cities, but one goes better with Nutella and the other with mustard. Indeed, comedian David Brenner (who, like Will Smith’s Fresh Prince of Bel-Air, was “West Philadelphia born and raised”) even titled his 1983 memoir Soft Pretzels with Mustard. With cheesesteaks and water ice, soft pretzels complete the city’s culinary trifecta.

Philadelphia soft pretzels are distinguished from all others by their shape (a figure-8, not loopy with a thick center and thinner ends), their texture (chewy, not crunchy), and their distribution method (look for them on street corners, not supermarkets). They come lightly salted, or, on request, as “baldies.”

Philadelphians eat pretzels on-the-run, in the office as breakfast, or after lunch from the food carts that dot Center City streets. In the suburbs and New Jersey, pretzels are sold in brown lunch bags by entrepreneurial vendors who sit on overturned milk crates at busy intersections. Homesick former Philadelphians even order pretzels to be shipped fresh overnight.

Like scrapple, which is not consumed in anywhere near the same quantity, soft pretzels are a legacy of the region’s Pennsylvania Dutch (Palatine Germans) who emigrated in the 1700s in search of religious freedom and fertile soil. In Lancaster County, primarily, Pennsylvania Dutch farming families adhere to old world ways, rejecting the use of electricity, telephones, cars, and even zippers. While their horse-and-buggy culture draws tourists to Lancaster County, inside Philadelphia’s Reading Terminal Market shoppers line up to watch Pennsylvania Dutch women twist and bake soft pretzels.

The soft pretzel has a long history, dating to 610 A.D., when French monks twisted and folded extra bread dough into the shape of a person’s hands criss-crossed on the chest, each palm touching the opposite shoulder, which was the traditional posture for prayer. The resulting tasty treat of knotted dough had three holes representing the Christian Trinity. These pretiolas, Latin for “little rewards,” were given to good little boys and girls. By the 1400s bretzels, as they were known in German, were being hawked from long poles by street vendors in European villages.

One of the earliest historical depictions of the soft pretzel may be an illustration in the 1190 Hortus Deliciarum, which shows a pretzel in the scene of the Persian King Ahasuerus at a banquet prepared for him by Esther. There are many later paintings of that Biblical feast, by Rembrandt and Jan Victors in the 1660s, for example, but no others show a pretzel. The soft pretzel also made an appearance in the lower right corner of The Fight Between Carnival and Lent painted by Pieter Bruegel the Elder in 1559.

In Philadelphia, a street vendor named Daniel Christopher Kleiss sold soft pretzels as early as the 1820s, according the curators of The Larder Invaded: Reflections on Three Centuries of Philadelphia Food and Drink, a joint exhibition of the Library Company of Philadelphia and the Historical Society of Pennsylvania.

The Sturgis family of Lititz, in Lancaster County, which started the first commercial pretzel bakery in 1861, says that in the 1840s, a passing hobo who may have been an itinerant baker gave the recipe for soft pretzels to a baker named Ambrose Rauch, who in turn gave it to his apprentice, Julius Sturgis. During the Civil War, Julius Sturgis sent pretzels to his brother, William, who was in Andersonville prison. And pretzels were among the treats sold in Philadelphia in 1864 at the Great Central Fair, which raised money “for the aid and comfort” of Northern soldiers.

The Nacchio family started Federal Pretzel Baking Company in 1922, and in 1930 even sold pretzels to the Philadelphia public schools to be served to students. (In 1963, Joseph Nacchio made a forty-pound soft pretzel for the film It’s a Mad Mad Mad Mad World.)

Although hand-twisting remained a point of pride for some baking companies into the twenty-first century, automation began in 1933 at the Reading Pretzel Machinery Company. The distinctive figure-8 shape evolved then, to make the pretzels fit the conveyor belt.

Federal Baking introduced its machine-cut soft pretzels in 1978. Pretzel-making remained concentrated in Pennsylvania, even after emerging as a national snack in the 1960s.

The practice of spreading mustard on soft pretzels is traced to the fact that pretzels were commonly sold by hot dog vendors, who were already offering mustard.

In the early twenty-first century, haute chefs in Philadelphia and in Manhattan started drawing on the popularity of Philadelphia soft pretzel, baking them round for dinner rolls. A number of gourmet bakeries returned to the term pretiolas, perhaps to make soft pretzels seem more authentic or exotic. Use of the classic soft pretzel recipe to make Pretzel Dogs is also relatively new. In keeping with the taste of Philadelphia, some soft pretzel bakeries even offer a version stuffed with cheesesteak.

Meanwhile, hard pretzels, which came into being when an unidentified Pennsylvania baker left a batch in the oven too long, come in greater varieties of shapes, from rods and sticks to rings and thins, with whole wheat or sourdough recipes topped with chocolate, caramel and more.

Pretzels have had their own commemoration since 1983, when Congress designated April 26 National Pretzel Day. 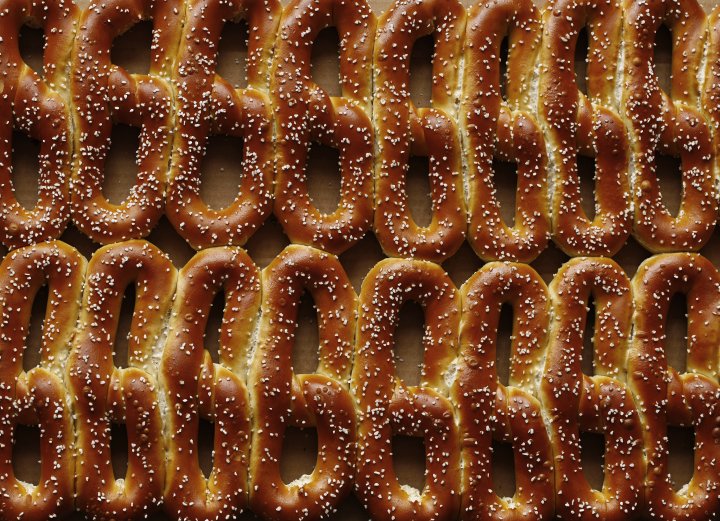 Philadelphia soft pretzels are distinguished from all others by their shape (a figure-8, not loopy with a thick center and thinner ends), their texture (chewy, not crunchy), and their distribution method (look for them on street corners, not supermarkets). They come lightly salted, or, on request, as "baldies". (J. Varney) 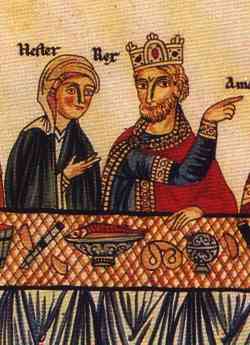 One of the earliest historical depictions of the soft pretzel may be an illustration in the 1190 Hortus Deliciarum, which shows a pretzel in the scene of the Persian King Ahasuerus at a banquet prepared for him by Esther. There are many later paintings of that Biblical feast, by Rembrandt and Jan Victors in the 1660s, for example, but no others show a pretzel. 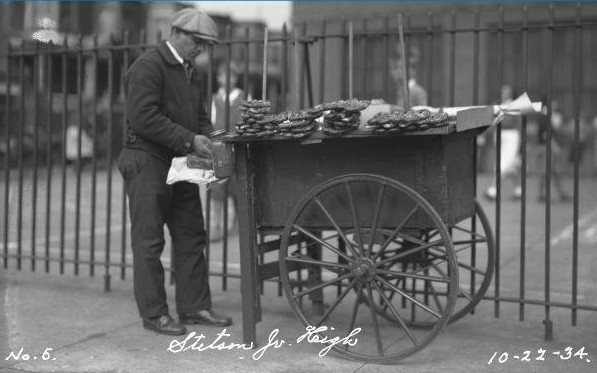 In the depths of the Great Depression, a pretzel vendor sets up shop outside Stetson Junior High School. 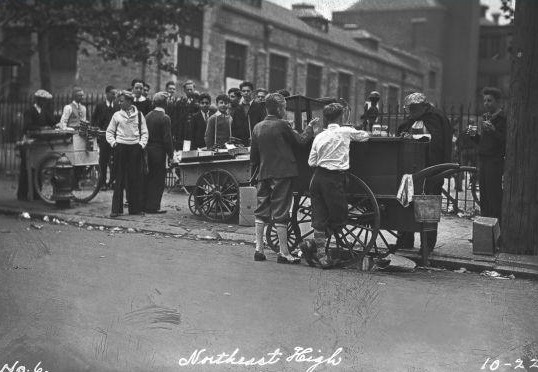 Pretzel vendors compete for business outside Northeast High School in 1934. 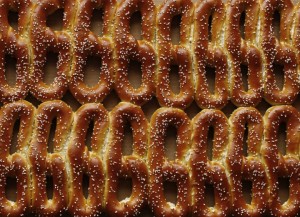 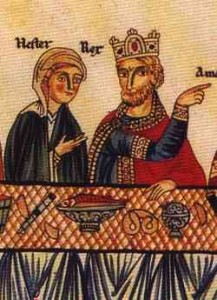 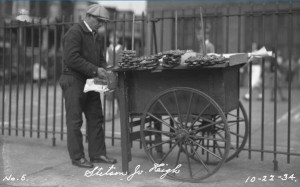 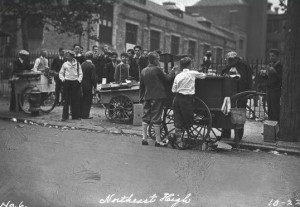