Lining Philadelphia’s straight, gridiron streets, the row house defines the vernacular architecture of the city and reflects the ambitions of the people who built and lived there. Row houses were built to fit all levels of taste and budgets, from single-room bandbox plans to grand town houses. The row house was easy to build on narrow lots and affordable to buy, and its pervasiveness resulted in Philadelphia becoming the “City of Homes” by the end of the nineteenth century. As Philadelphia emerged as an industrial epicenter, the row house became synonymous with the city and was held up as an exemplar for egalitarian housing for all.

From Philadelphia’s founding, the row house has served as an easy solution to housing the city’s residents. As ambitious colonists began to break up the big city blocks of William Penn’s “greene country towne” with secondary streets, alleys, and courts, speculative developers and builders constructed rows of houses that matched varied budgets and taste. In many American cities, including New York, Baltimore, Providence, and Washington, D.C., builders, developers, and residents used row houses to solve the problems of housing demand, steep land prices, and narrow lots. However, Philadelphia’s unique combination of original city planning, expansive geography, and the simultaneous trend of speculative building meant street (or court)-front land was obtainable by builders or modest investors at an easier rate compared to other major urban centers. As a result, Philadelphia’s streets, alleys, and courts were lined with relatively homogenous structures of predictable form and design. By the nineteenth century, the term “Philadelphia row” not only became synonymous with the landscape of the city, but it also became a term used elsewhere to describe orderly rows of regularized houses.

Constructing houses in a row was cost-effective and efficient for builders. It allowed them to replicate a design from only a few plans, consolidate crews and resources at one site, and buy materials in bulk. The shared party walls of row houses also meant less stone or masonry work compared to a free-standing house. For piping sewer, plumbing, and gas lines, such specialized and expensive work could be done for the entire row at one time, saving labor costs. Little changed between the houses as builders completed them down the street for eventual sale.

The earliest Philadelphia row houses reflected the building traditions of English settlers who, because of the devastating fire of 1666, embraced the fire-resistant, Georgian construction that was efficient in the city’s narrow lots. The first recorded group of row houses was Budd’s Row, a speculative development of ten buildings constructed around 1691 in present-day Old City, since demolished. Using medieval half-timber construction that was later banned, the houses were two stories high and two rooms deep. Except for cases like Budd’s Row, brick quickly became the standard material for construction. As the city expanded in the later eighteenth and nineteenth century and speculative development increased, the streets filled with orderly rows of houses.

As Philadelphia rapidly expanded after the Civil War, the row house served as the standard form used by builders to fill in new neighborhoods. In 1891, editors of the nationally-circulated Harper’s Weekly understood that the “typical Philadelphia home” was a row house, and included illustrations of an ornamented brick row house with front porch alongside a more humble version, implying for the magazine’s audience that the row house could house both working- and middle-class residents. In 1893, city promoters embraced this characterization when, at the World’s Columbian Exposition in Chicago, they constructed a simple brick row house described as a “model Philadelphia house.” The cost for such a building was approximately $2500.

For reformers and city promoters, the row house also presented social and economic benefits for the city and its residents that they often emphasized. The relatively low cost of $2,500 to purchase a modest row house reminded visitors at the Exposition and readers of catalogs and magazines that the dwelling was affordable for most, and Philadelphia was well-known for its high rate of homeownership. The row houses’ popularity in Philadelphia consequently earned it the slogan the “City of Homes.” However, many contemporaries also correlated homeownership with public health and safety. Many also argued that high homeownership rates helped to cultivate a more “contented” labor force in Philadelphia than in other cities like New York and Chicago. Ideologically, the row house and the homeownership it enabled had broader implications for the culture of the city and the way it was promoted on a national level.

The inherent interconnectedness of row house construction—with shared walls and close proximity—had lasting consequences for Philadelphians who would own and live in them. In Philadelphia neighborhoods tightly packed with row houses, the problems of one building could easily spread to others. City leaders planned for obvious calamities like fires by requiring tall masonry party walls that rose above rooflines, meant to stop potential fires from spreading from house to house.  However, flooded basements, unwanted infestations, structural failures, and even explosions that plagued one house could easily impact the immediate neighbors, and at times spread across streets and alleys impacting surrounding residents. Row house living at its best was an intimate one that encouraged strong neighborly bonds; it could also present unintended problems.

Throughout Philadelphia’s history, row houses captured the ambitions of city leaders and residents. The row house serves as evidence of residents’ defiance of the green country town that William Penn envisioned. Easy to construct and affordable, the row house  enabled a high rate of home ownership and thus earned its place as a symbol of the city’s landscape.

Even in the c. 1718 South East Prospect of Philadelphia, by Peter Cooper, jumbled groupings of brick row houses are visible in early Philadelphia. 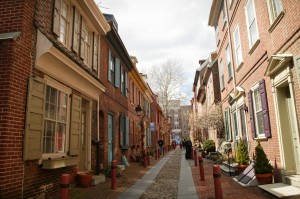 Row Houses on Elfreth's Alley date to the eighteenth century. (Photograph for The Encyclopedia of Greater Philadelphia by Jamie Castagnoli) 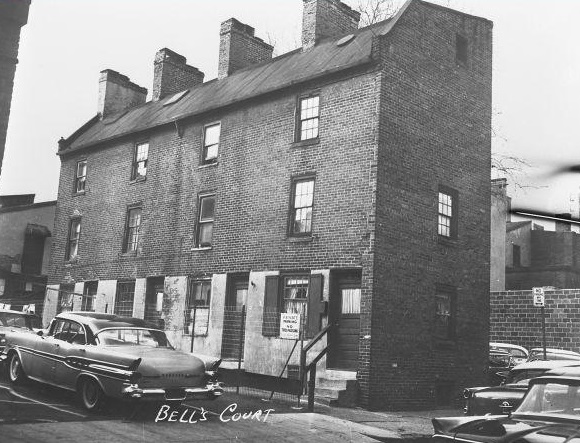 The bandbox (sometimes called a trinity) is the smallest and therefore cheapest to construct, and it normally served as housing for the working-class or servants of larger properties nearby. These homes were often constructed on courts behind larger properties or in narrow alleys that divided larger blocks. The bandbox is typically no larger than sixteen feet on any side, with one room on each floor, rising two or three stories with enclosed winding stairs. The privies, or “necessaries,” were normally at the rear of the courts. In 1948 architectural historian William Murtagh found more than twenty courts filled with Bandbox row houses in Society Hill, but many were later demolished. Bell’s Court off Saint Josephs Way -- pictured here in 1959 --and Bladen’s Court off of Elfreth’s Alley are two examples that survived into the twenty-first century. 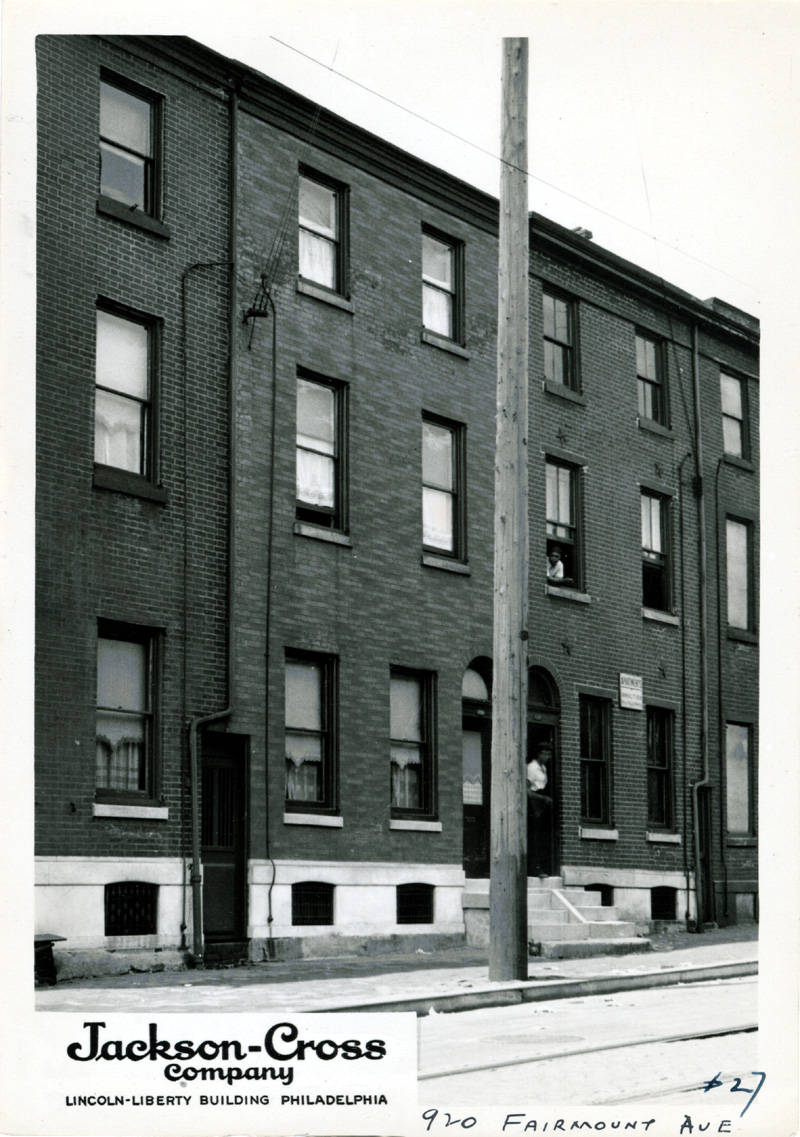 A 1940 real estate photograph commissioned by the Jackson-Cross Company depicts a brick row house converted to apartments in the 900 block of Fairmount Avenue. The Jackson Cross-Company, established around 1876, was a Philadelphia real estate firm in operation until 1998. (Text by the Library Company of Philadelphia) 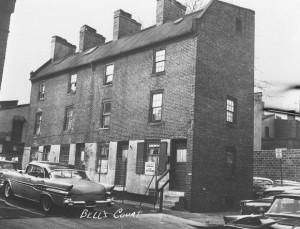 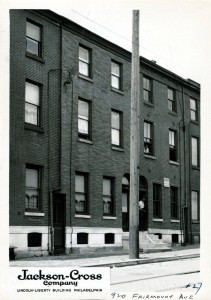