The Haitian Revolution, the most successful slave revolt in the history of the modern world, caused large numbers of both Black and white people to flee the Caribbean, with many relocating to the United States. In 1793 Philadelphia received hundreds of these refugees, including white slaveholders and their enslaved Africans. Foreign policy decisions also were made in Philadelphia, the nation’s capital during the 1790s. Therefore, on both the local and national levels the Haitian Revolution played an important role in Philadelphia’s federal period.

Occurring on what was then known as the French colony of St. Domingue, the Haitian Revolution lasted from 1791 to 1804. The army of rebelling slaves, commanded by Toussaint L’Ouverture (1743-1803), wrested control of the colony from its white rulers, and, after a series of brutal power struggles, Haiti eventually became the first Black-led nation in the Western Hemisphere.

Refugees arriving from St. Domingue had a definitive influence on the culture of the city. The Haitian immigrants of African descent added diversity to Philadelphia’s Black community. It became common to find people of color with French names, and the French language could be frequently heard on the street. Also, the congregations of the city’s Catholic churches, particularly St. Joseph’s, became instantaneously biracial. Philadelphia residents, feeling sympathy for the whites who had lost land and possessions, raised nearly $14,000 in relief aid.

It was and continues to be speculated that the yellow fever was brought to Philadelphia by ships carrying Dominguan refugees. Benjamin Rush (1746-1813), the eminent physician and abolitionist, sincerely believed that Black people had immunity to the illness, and, as such, thought they had an obligation to attend to the afflicted. The Free African Society, possibly the first African American benevolent society in the United States, concluded that acting on Rush’s plea for help would strike a blow against racism by showing how Black people could be valuable citizens. Led by former slaves Richard Allen (1760-1831) and Absalom Jones (1746-1818), the Society demonstrated remarkable courage by nursing the sick and burying the dead. Tragically, Rush was wrong in his estimation that Black people were immune to the fever; they died at a rate almost equal to that of whites.

During the decade the federal capital was in Philadelphia, United States policy toward St. Domingue changed substantially. Important policy decisions emanated from the presidential residence, located at Sixth and Market Streets. George Washington (1732-99), president until 1797, was not supportive of the Dominguans in rebellion, but his successor, John Adams (1735-1826), took a different position following a visit by Joseph Bunel, Toussaint L’Ouverture’s diplomatic representative. Bunel arrived in 1798 to meet with U.S. government officials accompanied by his wife, Marie Bunel. Marie, a free Black creole, worked in the city as an independent merchant, choosing to stay even after the revolution concluded.

Paul Campbell is an M.A. candidate in American History at Temple University. He also works as an interpretive Park Guide at Independence National Historical Park. (Author information current at time of publication.) 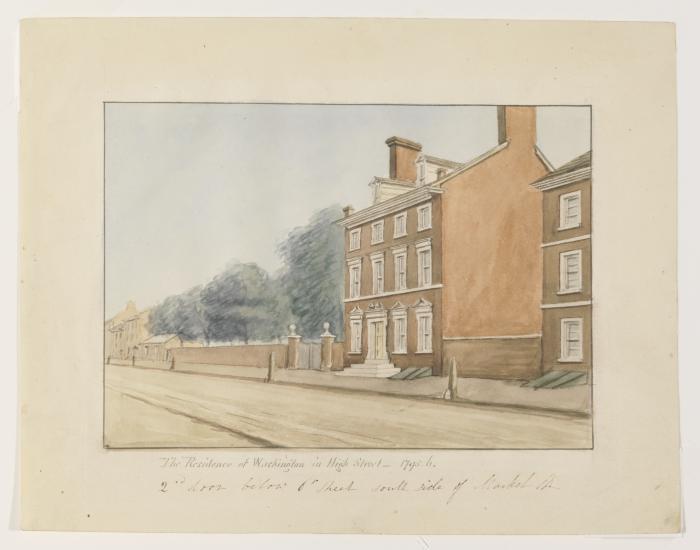 The President's House, located at Sixth and High (Market) Streets, was the setting for a significant change in United States policy regarding the Haitian Revolution. George Washington and John Adams resided and produced policy within this house while Philadelphia served as the nation's capital, prior to the federal government's move to the District of Columbia. Washington was not supportive of the Dominguans rebellion and refrained from trading with the new government. But after Haitian diplomatic representative Joseph Bunel reportedly met with President John Adams in 1798 or 1799, Adams shifted foreign policy and opened economic trade between St. Domingue and the United States. This watercolor by an unknown painter depicts the President's House as it would have looked in the 1790s. 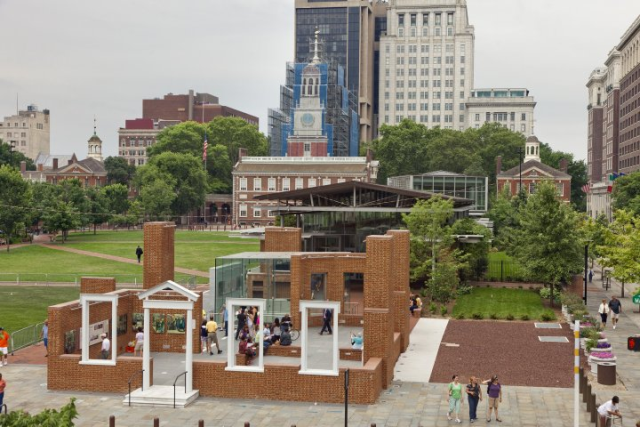 Pictured here is 2010 in the President's House site, located on Sixth and Market Streets in Independence National Historical Park. The open-air exhibit consists of partial walls that suggest the appearance of the President's House while George Washington and John Adams resided there. The exhibit interprets the national policies created in the President's House, the narrative of slavery in the United States in the early years of the United States, and the story of nine slaves who were owned by Washington and who lived within this house during his presidency. Among the subjects are the Haitian Revolution and Joseph Brunel, showing the prominence that the Haitian Revolution had in Philadelphia and the nation in the 1790s. (Photograph by G. Widman) 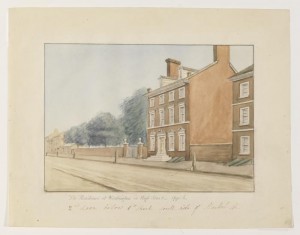 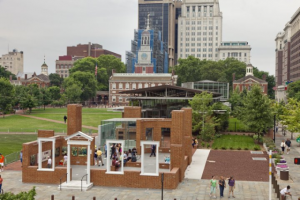 Girard, Philippe R. “Trading Races: Joseph and Marie Bunel, a Diplomat and a Merchant in Revolutionary St. Domingue and Philadelphia.” From Journal of the Early Republic Vol. 30 No. 3 (Fall 2010): 351-376.