Andrew Newman is Associate Professor and Graduate Program Director for the Department of English at Stony Brook University. He is the author of On Records: Delaware Indians, Colonists, and the Media of History and Memory (Lincoln: University of Nebraska Press, 2012). (Author information current at time of publication.)

This wampum belt, which is on exhibit at the Philadelphia History Museum, was said to be given to William Penn by the Lenape tribe at the time of the 1682 treaty. The belt, donated in 1857 to the Historical Society of Pennsylvania by a great-grandson of Penn, is made of white wampum with darker accent beads and depicts two figures holding hands, often interpreted as a sign of friendship and peace. Wampum refers to the shell beads used as currency by Native Americans in the eastern United States. The beads are made of clam and whelk shells and were used as memory aids, often given to commemorate important events such as engagements, marriages, or funerals. Wampum could be fashioned into a belt and used to keep an oral history. The belts were also used as currency and — as seems to be the case here — to mark the creation of treaties. 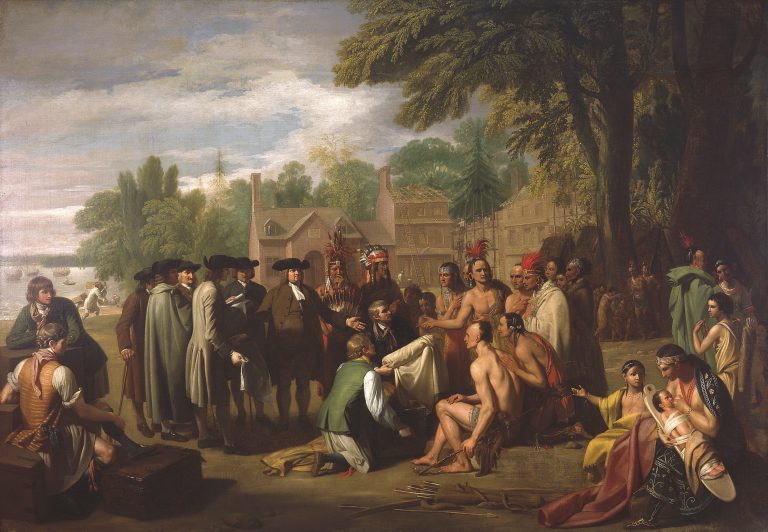 Penn Treaty Park, named for the traditional story of William Penn’s peaceful treaty with the Lenni Lenape Indians, is found at 1341 N. Delaware Avenue in Philadelphia’s Fishtown section, about 1½ miles upriver from Penn’s Landing on the Delaware River. The treaty supposedly was agreed to on land now occupied by the park. In Penn’s Treaty with the Indians, by Benjamin West (1738-1820), the iconic event is depicted as West imagined it. The site of the agreement was said to be marked by the Great Elm, located to the right in the image. The original elm fell during a storm in 1810, and two hundred years later, in May 2010, a descendent elm was planted in its place. Though no first-hand evidence of the treaty exists, West and other artists have contributed to the legend through their art, and the park’s establishment helped perpetuate it as well. 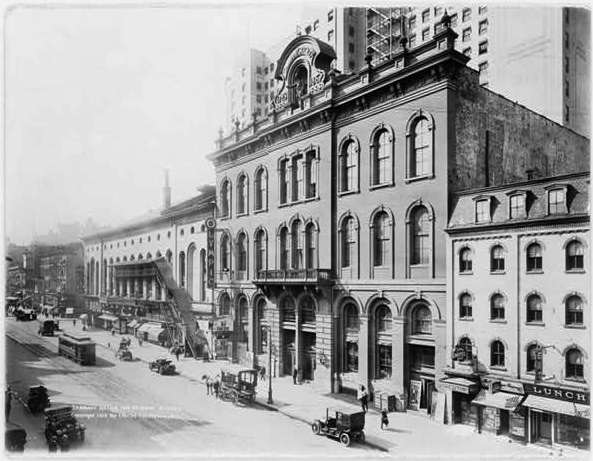 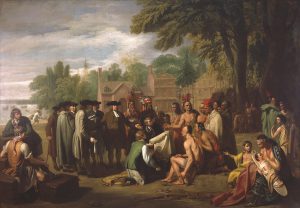 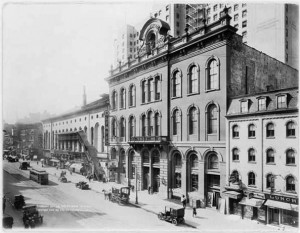 Du Ponceau, Peter Stephen, and Joshua Francis Fisher. A Memoir on the History of the Celebrated Treaty Made by William Penn with the Indians: Under the Elm Tree at Shackamaxon, in the Year 1682. Philadelphia: Printed for M’Carty & Davis, 1836.

Newman, Andrew. On Records: Delaware Indians, Colonists, and the Media of History and Memory. Lincoln: University of Nebraska Press, 2012.

Vaux, Roberts. “A Memoir on the Locality of the Great Treaty Between William Penn, and the Indian Natives in 1682.” In Memoirs of the Historical Society of Pennsylvania, edited by Edward Armstrong, 1:87–106. Philadelphia: J.B. Lippincott & Co., 1864.

Voltaire. Letters Concerning the English Nation. London: Reprinted by and for George Faulkner, 1733.