During the colonial period, the diversity of the region that became southeastern Pennsylvania, southern New Jersey, and northern Delaware made trade and diplomacy difficult. The many cultural, especially linguistic, barriers between various Native American and European groups required go-betweens, or intermediaries. The intermediaries who were called upon to interpret across cultures and help maintain the fragile peace were as diverse as the region from which they came. They ranged from a French-Shawnee fur trader to a German pioneer, from an acculturated Delaware to a Polish-Prussian missionary, and from an Oneida living in a Shawnee village to a Delaware captive.

Trying to maintain peace from the early seventeenth century to 1763 was demanding work. Intermediaries spent much time on the road carrying letters and wampum belts across treacherous terrain. Once they reached their destination, they translated the letters and belts as well as swapped and gathered information. At the great councils, which followed native customs, intermediaries translated the speeches given by native and colonial leaders. Following native protocol allowed Indian leaders to select go-betweens based on kinship connections and their standing within the native community, while colonial leaders had to identify individuals with an intimate knowledge of a particular native culture and language, which were extremely difficult to learn.

The earliest colonial intermediaries in the region were Dutch fur traders. Two of the first were Simon Root, who lived in a home at Wigquakoing or Wicaco (present-day South Philadelphia), and Jan Andriessen, who lived near Fort Casimir (present-day New Castle, Delaware). On July 13, 1647, for example, Root and Andriessen, who claimed to understand the Susquehannock language, testified to New Netherland director-general Petrus Stuyvesant (d. 1672) that Aquariochquo and Quadickho, two Susquehannock leaders, wanted to continue mutual trade with the Dutch even though New Sweden governor Johan Printz (1592–1663) had asked for permission to set up a trading post among them. Printz claimed that he, not the impoverished Dutch, could sell them plenty of powder, lead, and guns.

The Growth of Intermediaries

Root and Andriessen were soon joined by a number of other Dutch and Swedish intermediaries, including Jacob Svensson who acted as a go-between for the Swedes and Dutch with the Susquehannocks and Lenapes. However, the most important intermediary in the second half of the seventeenth century was one of Root’s neighbors, the Swedish fur trader Lars Petersson Cock (d. 1699). Prior to the arrival in 1682 of the new proprietor of Pennsylvania, William Penn (1644-1718), Cock arranged, in his own home, land sales between Lenape leaders and the proprietor’s representatives.

When Cock died in 1699, finding a replacement proved to be quite difficult. Although Pennsylvania officials employed a number of Indian go-betweens, including a Conoy named Ouseywayteichks who reportedly knew four native languages, and the English-speaking Susquehannock Shawydoohungh, provincial officials were loath to rely solely on Indians no matter how effective they might be. Thus, officials also turned to French fur traders such as the Huguenot Jacques Le Tort (c. 1651-c. 1715) and his son James Le Tort (c. 1700-c. 1765), who married a Shawnee woman; the brothers Pierre Bizaillon (1662–1742) and Michel Bizaillon; and Martin Chartier (1655–1718), who married a Shawnee woman named Sewatha Straight Tail (1660-1759). Provincial leaders also relied on the Quaker fur traders John Cartlidge (1684-1726) and Edmond Cartlidge (1689-1742) who spoke Unami, the language of the Lenapes. By 1722 native and colonial leaders had plenty of intermediaries to call on when trade and land crises arose.

In 1728 rumors of war swept across the region. Delawares proposed war against the European settlers while Susquehannocks threatened war against the Shawnees. Meanwhile, a skirmish between eleven Shawnees and twenty colonists in the Schuylkill Valley led to the murder of three Delawares. Governor Patrick Gordon (1644-1736) immediately dispatched several fur traders, including James Le Tort, to gather information about the circulating rumors, offer condolences to the Delawares, and reprimand the Shawnees. The go-betweens were also instructed to remind as many Indians as possible of William Penn’s friendship. To renew that friendship, intermediaries brought the parties together at a series of treaty councils in 1728, in May at Conestoga, in June at the Quaker Meeting House in Philadelphia, and in October at the Philadelphia Courthouse. As a result, a frontier war was averted.

A New Generation of Go-Betweens

Following the councils of 1728, a new group of intermediaries emerged. The most prominent of these men were Shickellamy (d. 1748), an Oneida leader living in the multi-ethnic town of Shamokin (present-day Sunbury and Shamokin Dam), and the German pioneer Conrad Weiser (1696-1760) of Tulpehocken. They helped orchestrate a series of major treaties between the leaders of Iroquoia and Pennsylvania in 1732, 1736, and 1742, which promoted trade and asserted control over the peoples living between Onondaga and Philadelphia. The population increased steadily between the two capitals, however, leading to more frequent disputes between native and colonial neighbors.

Competing claims to the lands of the Ohio Country led to the outbreak of the Seven Years’ War (1754-1763) between the English and French and their various native allies. After the French defeated a British expedition sent to capture Fort Duquesne on July 9, 1755, a group of Delawares began raiding provincial settlements from the Juniata River to Shamokin. Following the raid on the settlement at Penn’s Creek (October 16, 1755), the intermediaries hit the road once again. Scarouyady, an Oneida leader, and Andrew Montour (c. 1720-72), a French-Oneida-Algonkin guide, headed for Onondaga. In 1756 Kos Showweyha (d. 1756), an Ohio Seneca; Sata Karoyis, an Ohio Mohawk; and Lacquis, a Jersey Delaware, trod the paths multiple times between Philadelphia and the Delaware villages on the North Branch of the Susquehanna. Then, in 1758, the English-speaking Delaware Pisquetomen (fl. 1731-62) and the Moravian missionary Christian Frederick Post (1710-85) set out for the Allegheny Valley with the offer of Governor William Denny (1709-65) to renew the peace with the Ohio Indians provided they remained neutral. Remarkably, in the midst of the Seven Years’ War, this new group of intermediaries was able to ensure the loyalty of the Iroquois, appease the Delawares, and neutralize the Ohio Indians.

Decline of the Intermediaries

Hearts, however, were hardening. Many natives had become disillusioned with the colonists’ apparent intent on achieving their end of acquiring land at any cost, which included the use by colonial intermediaries of presents, bribes, liquor, fake maps, and vague treaty statements. On the other hand, the majority of colonists, incensed by native attacks, believed the time for Indian councils had passed. Although intermediaries such as the Irish fur trader turned deputy Indian agent, George Croghan (1718-82), continued to negotiate treaties, the government of Pennsylvania called upon them less and less frequently.

Over the course of the seventeenth and much of the eighteenth century, native and European go-betweens had often interpreted the kaleidoscope of cultures that existed in the region that became southeastern Pennsylvania, southern New Jersey, and northern Delaware. For many years they helped maintain a tenuous peace, but, with questionable methods such as fake maps and vague treaty statements, some intermediaries collaborated with the government of Pennsylvania and land speculators, thus triggering the Indians’ frustrations that played a role in the outbreak of violence and the Seven Years’ War.

Stephen T. Staggs is an Adjunct Professor of History at Calvin College and author of “The View from the Dutch Republic: Protestant Conceptualizations of Indians,” which appeared in De Halve Maen (Spring 2013). (Author information current at time of publication.) 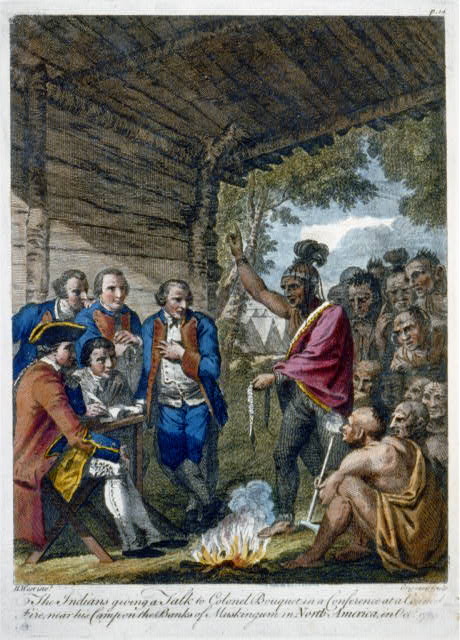 The Indians Giving a Talk to Colonel Bouquet

This 1766 engraving by Benjamin West depicts a 1764 meeting between a multiethnic group of Native Americans and the English Colonel Henry Bouquet. One year prior to this meeting, Bouquet and General Jeffrey Amherst infamously distributed smallpox-infected blankets amongst tribes near Fort Pitt, modern Pittsburgh, which resulted in the death of an estimated 500,000 Native Americans. At this meeting, intermediaries of the Shawnee, Delaware, and Ohio tribes met Bouquet on the banks of the Muskingum River, Ohio, to negotiate for the return of captives taken by the Native Americans on the Pennsylvania borders. Among them were some who had been captured as children and raised by the tribe and were unwilling to return to European culture. In exchange, Bouquet agreed not to seize their lands. 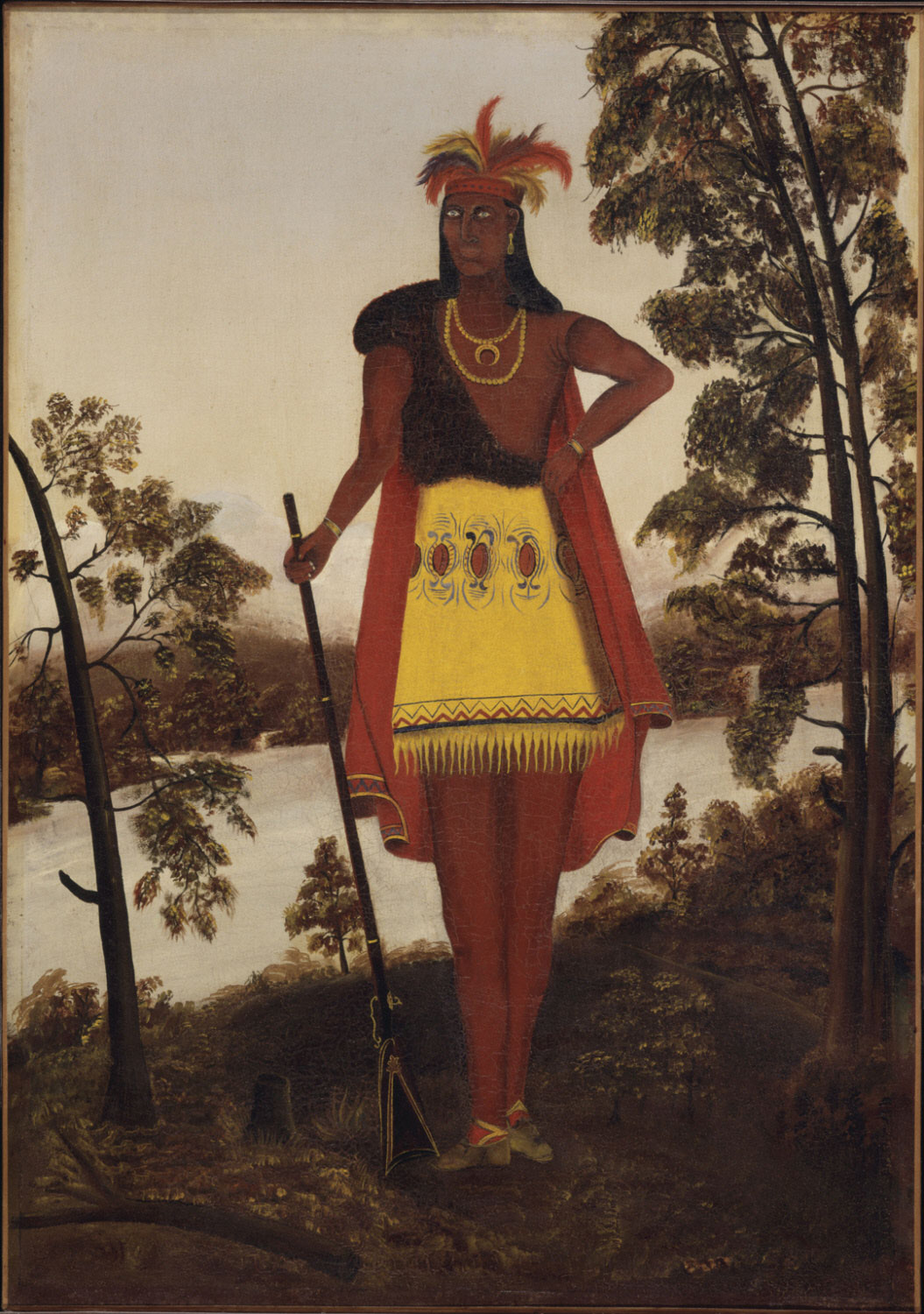 Shikellamy of the Oneida

Shikellamy of the Oneida tribe lived in the multiethnic village of Shamokin, located near modern Sunbury, Pennsylvania. He served as a leader of Shamokin and an important diplomat between the Iroquois League and the colonists. In the years before the French and Indian War, Shikellamy worked alongside German settler Conrad Weiser to negotiate land and trade deals peacefully with colonists. While these deals served to avoid war in many cases, they were sometimes made without the consent of those tribes that inhabited the land. Shikellamy and Weiser were instrumental in negotiating the Walking Purchase, which stripped the Delaware tribe of a tract of land the size of Rhode Island. 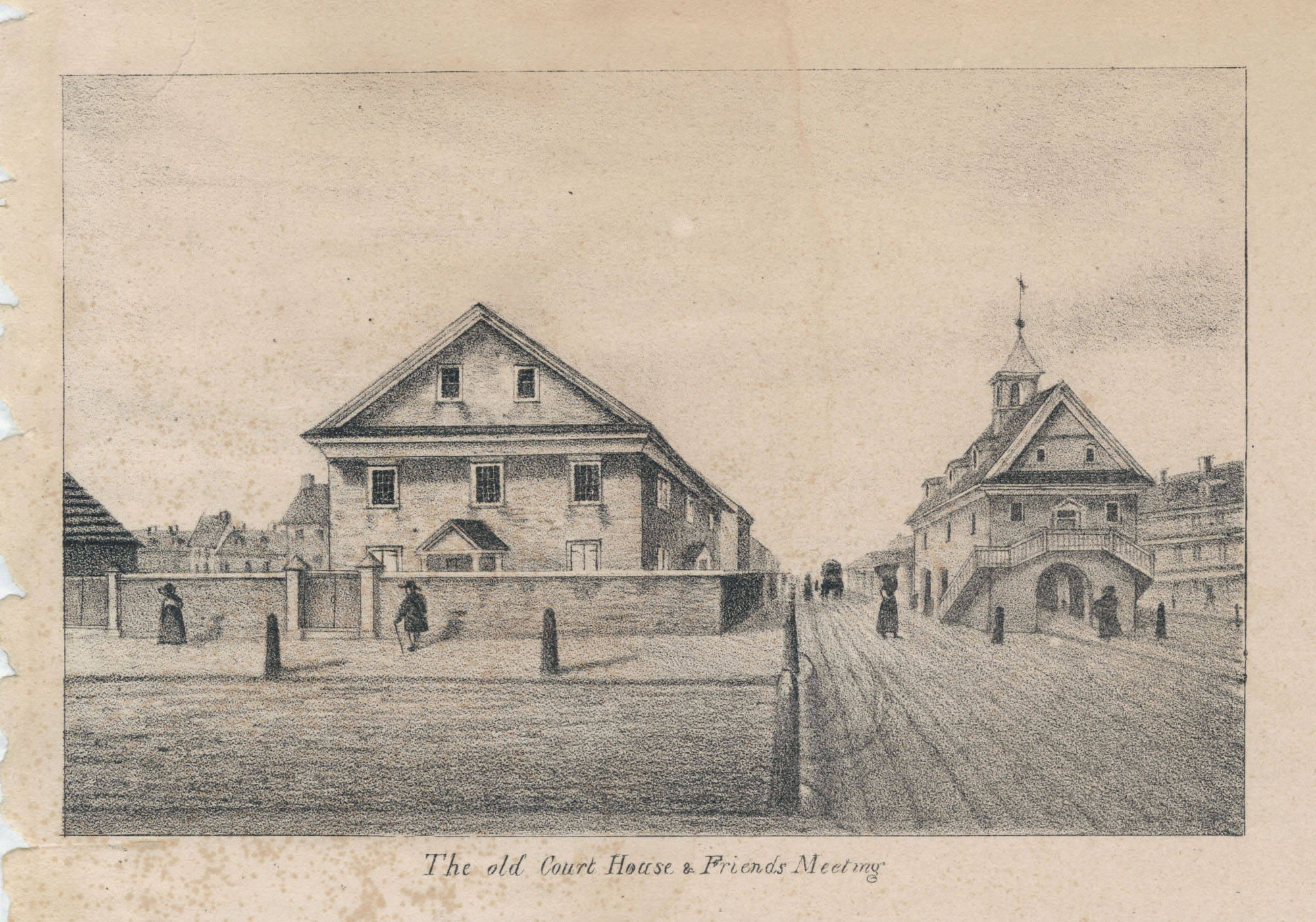 Friends Meeting House (at left in this image) and Old Court House, both on Market Street near Second Street, served as important meeting places during the colonial era. In 1728, rumors of hostility and skirmishes between European settlers and local Delaware, Shawnee, and Susquehannock tribes almost erupted into a war. Tensions heightened after three Delaware men were murdered in the Susquehanna River Valley. Pennsylvania governor Patrick Gordon, using fur traders as intermediaries, quelled tensions with meetings at the Friends Meeting House in July and at the Court House in October of that year.

The Friends Meeting House was built in 1696 and rebuilt on the same location in 1754. It was home to some of the most important meetings for the Society of Friends in the eighteenth century and was demolished in 1804 when it was replaced by the Arch Street Meeting House at Fourth and Arch Streets. The Old Court House was built between 1707 and 1710 and served as a center of justice for the city until the construction of the Philadelphia County Court House in 1780. It was demolished in 1837. 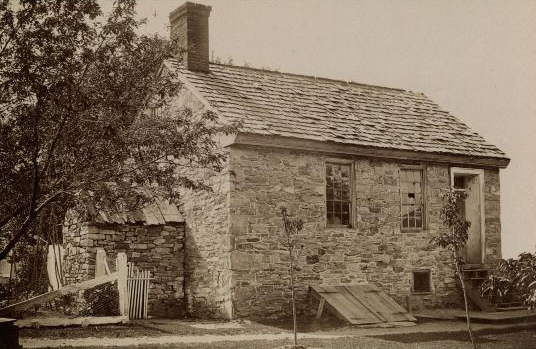 Conrad Weiser was an important go-between for the Iroquois and European settlers. Weiser was a German settler who emigrated to Mohawk land in New York and learned their language and culture. Because of this, he was trusted both by European settlers and members of the Iroquois league. He formed a friendship with Oneida tribesman Shikellamy during the critical years before the French and Indian and Revolutionary Wars, which forever changed the relationship between Europeans and Native Americans.

While it is unknown whether he lived in this house on his Womelsdorf, Berks County homestead, it is known that it dates to the time of his life. The homestead, shown here in a 1907 photograph, still stands and is a Pennsylvania state landmark. 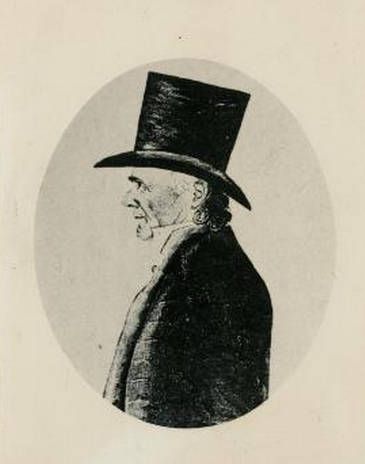 Conrad Weiser (1696-1760) was a German settler in Pennsylvania who served as an important intermediary between the Iroquois and the colonists. Weiser learned the Mohawk language while living in the Schoharie Valley of New York prior to migrating to Pennsylvania. He was trusted by both the Iroquois, who considered him an “adopted son” of the Mohawks, and the colonists, and throughout the 1730s and 1740s he provided important translation services between the two groups. Weiser often worked with the Oneida tribesman Shikellamy to negotiate land and trade deals. 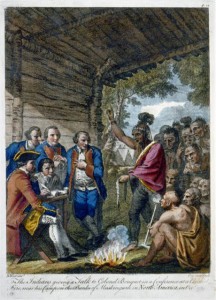 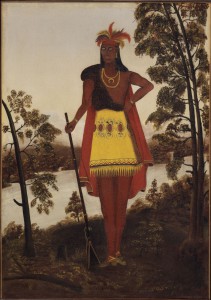 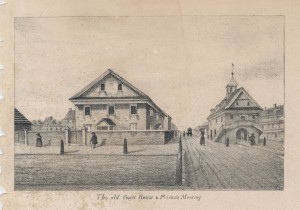 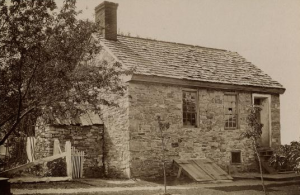 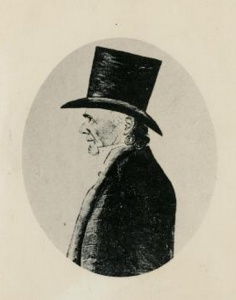 Doblin, Helga, and William A. Starna, eds. The Journals of Christian Daniel Claus and
Conrad Weiser: A Journey to Onondaga, 1750. Philadelphia: The American
Philosophical Society, 1994.

———. “ ‘With the Air and Gesture of an Orator’: Council Oratory, Translation and
Cultural Mediation during Anglo–Iroquois Treaty Conferences, 1690–1774.” In New
Trends in Translation and Cultural Identity. Edited by Micaela Muñoz-Calvo, Carmen
Buesa Gómez, and M. Ángeles Ruiz-Moneva. Newcastle upon Tyne: Cambridge
Scholars Publishing, 2008.

Jennings, Francis. The Ambiguous Iroquois Empire: The Covenant Chain Confederation of Indian Tribes with English Colonies From Its Beginnings to the Lancaster Treaty of 1744. New York: W. W. Norton & Co., 2013.