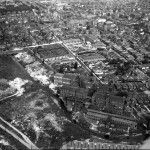 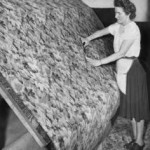 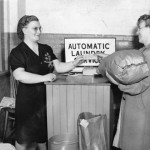 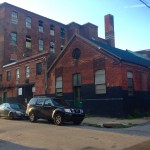 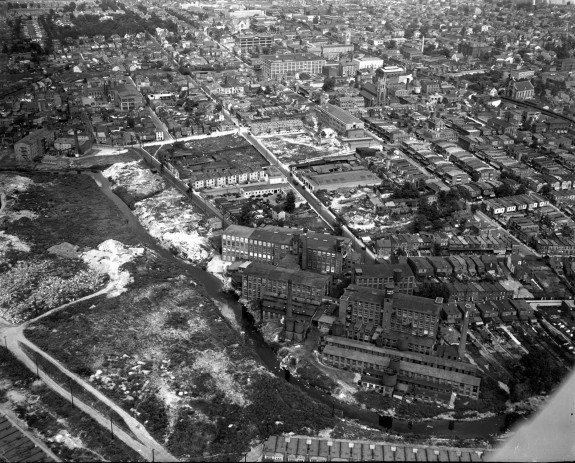 Built in 1903 along the Frankford Creek in present-day Juniata Park/Feltonville, the Alirene Mills textile plant was originally owned by John Bromley and was known as Bromley Mills until the 1920s. Still under the ownership of Bromley until at least 1929, the Mill grew rapidly. From one large building the plant quickly grew into the complex of structures in the lower right of this photograph from 1930. Bromley’s success at his original mill, on Lehigh and Frankford Avenues in Kensington, had enabled him to expand his operations to the north. 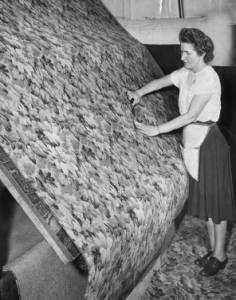 In this photograph from 1948, textile worker Alvin Casey uses a process called “smoothing” at the ArtLoom Carpet Co. plant. Smoothing is a preliminary step in the mass production of rugs and is intended to remove all creases and rolls from the material, so the rug will lie flat. Smoothing was a time-consuming process and, as shown here, was often done by hand on large swatches of rug that were elevated and sloping toward the worker.

In the early twentieth century, Philadelphia’s rugs and carpets were in high demand, but by the time of this photograph in mid-century, the manufacturers faced serious competition from centers beyond Philadelphia. 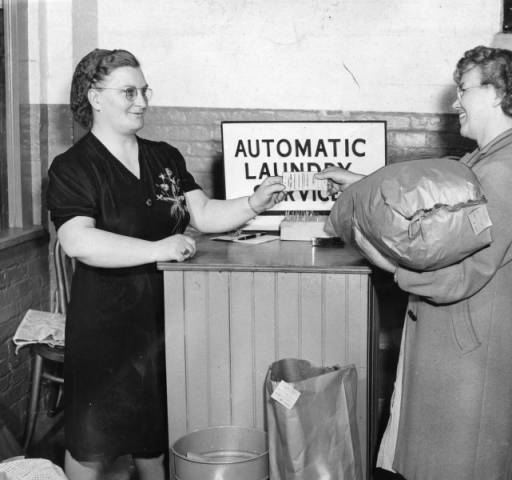 Though male workers often slightly outnumbered female workers in carpet mills, there was still a sizable presence of female workers in the carpet industry. Female workers were seemingly in high demand at Mohawk Mills, which offered an automatic laundry service for employees. Though the service was open to all employees, it was instituted to combat female workers’ absenteeism. Often, women would miss shifts because they had duties to attend to at home, such as cooking, cleaning, and laundering clothes. This laundry service was evidence of the new demands placed on women’s shoulders as they entered the workforce en masse. The societal pressure to perform adequately as a worker and a homemaker led to many women working a “second shift” as wives and mothers after returning home from the factory. Mohawk Mills’ laundry service was intended to take some domestic burdens off women’s shoulders, albeit so they could work more hours for the company. 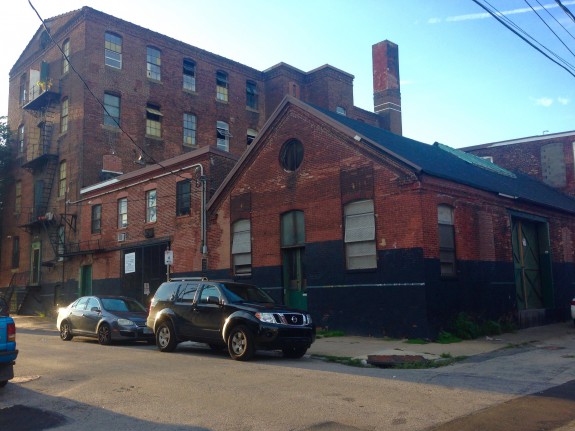 Built in 1882 and originally called Joseph Taylor’s Mill, this set of buildings on the corner of Montgomery and Howard Streets was first called the Star Mill in the 1891 Hexamer General Survey. The Original Star Mill was located a few blocks south of Taylor’s Mill, but it is possible that a relative, who was employed at the original site, brought his business to this site and carried the Star Mill name with him. In the beginning of the twentieth century, Arrott Steam Power Mills Co. bought this mill, but by mid-century it was unclear who retained ownership of the complex.

However, unlike many of Kensington’s mills, the Star Mill was not abandoned. The building was converted into loft apartments by the mid 1980s and continues as housing today. Popularly referred to as the Berks Warehouse by residents and neighbors alike, the Star Mill has become popular housing for Kensington’s young creative types, as many residents host live art and music shows or do amateur music recording in their homes. As Kensington and neighboring Fishtown seek to attract residents, many of the abandoned mills and factories of North Philadelphia have been converted into living and work spaces as an alternative to demolition and new construction.

(Photographed by Mikaela Maria for The Encyclopedia of Greater Philadelphia) 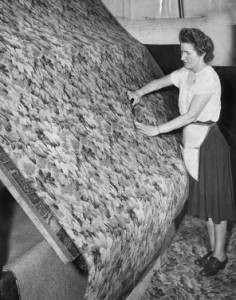 The 1880s’ erratic markets and owner-worker battles proved disastrous for small firms, especially hand-weaving ones, in carpets and rugs. Though roughly the same workforce occupied mill places in 1893 as in 1880 (about 11,000 regionwide), the number of firms dropped by two-thirds, from about 300 to 99. Whereas nearly 14,000 textile jobs could be found in Philadelphia’s suburban counties in about 1893, fewer than five percent of these (690) lay in the carpet trades. Then and thereafter, carpet weaving was a city business. 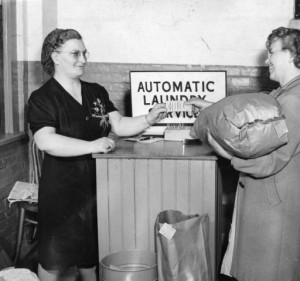 Mohawk Mills’ laundry service was intended to take some domestic burdens off women’s shoulders, albeit so they could work more hours for the company. (Special Collections Research Center, Temple University Libraries )

Philip Scranton is Board of Governors Professor of History Emeritus at Rutgers University-Camden. He has published widely on Philadelphia’s industrial history. He is researching steadily changing business practices in post-1945 developed, developing, and socialist nations.

Essinger, James. Jacquard’s Web: How a Hand-Loom Led to the Birth of the Information Age. New York: Oxford University Press, 2004.