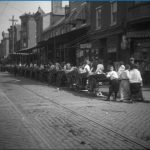 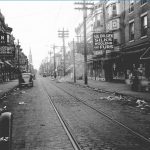 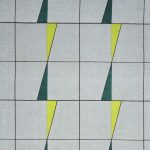 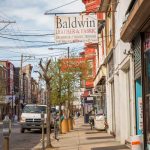 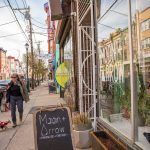 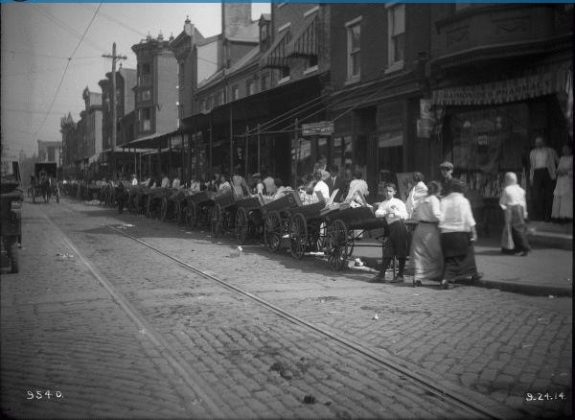 City of Philadelphia Department of Records

Before they were banned in the 1950s, many immigrants made a living by selling dry goods out of pushcarts, as shown in this 1914 photo of pushcarts and merchants at Fourth and Fitzwater Streets. A pushcart is a small cart with two to four wheels that is usually pushed by hand. After the second wave of immigration in the early 1900s, many Jewish immigrants made their livelihood by selling goods from pushcarts. Over five hundred pushcarts stretched from Lombard to Carpenter Streets until they were banned by city ordinance in 1955, following an increase of automobiles and decrease of street space. 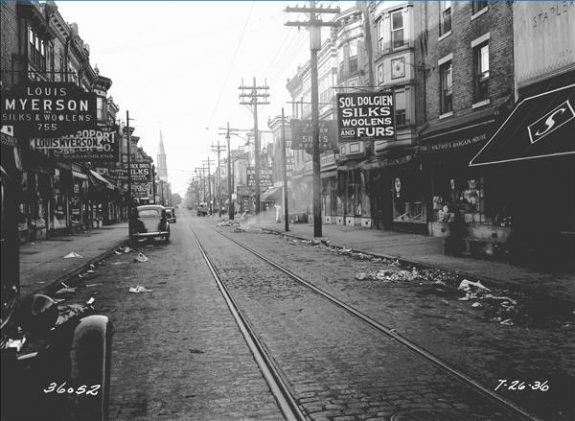 With an increase of automobiles on the streets of Philadelphia, pushcarts began to go by the wayside. Instead, store fronts like the ones in this 1936 photograph of South Fourth Street became more common, and ultimately the new norm for Fabric Row. The South Fourth Street Business Men's Association, formed in 1933, helped to keep these businesses regulated and Fabric Row running by establishing regular hours, and promoting police security and general cleanliness. 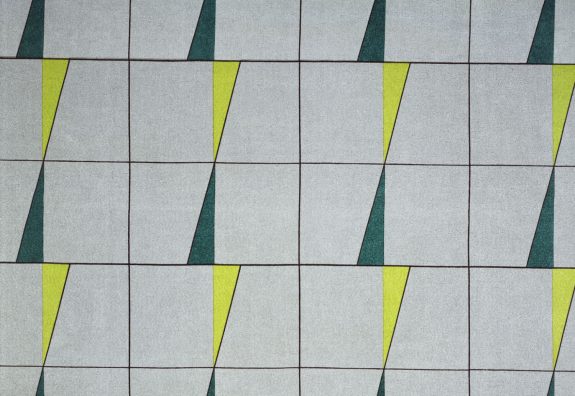 This printed textile titled “Point on Point” (c. 1951) is an example of one of the many designs manufactured by Stapler Fabrics. The design is printed on a plain weave synthetic fabric commonly used in the 1950s. Stapler Fabrics started as one of the many pushcarts This print was gifted to the Philadelphia Museum of Art in 1955 by David Stapler himself and is currently part of a collection of fabrics. 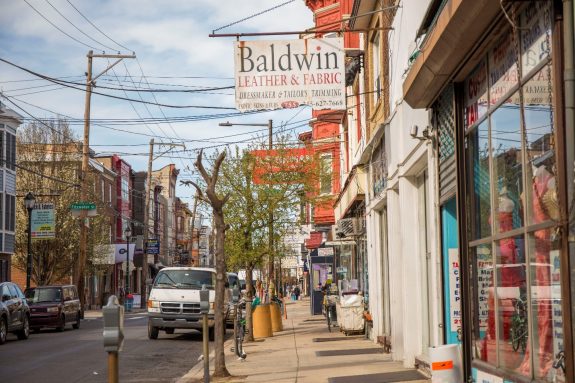 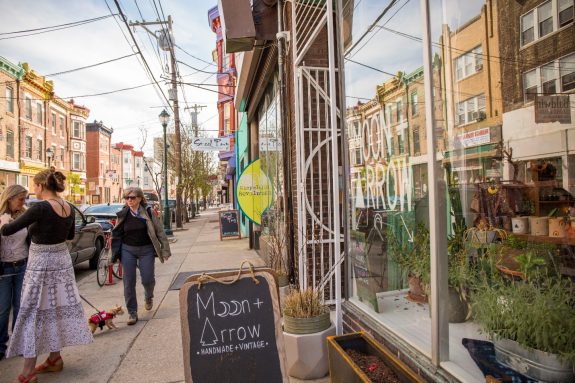 Today, modern artisan shops have replaced the pushcarts and peddlers of Fourth Street. Moon + Arrow is just one of many boutiques that draw on the spirit of Fabric Row, selling handmade and vintage jewelry, clothing, accessories, home-furnishings, decor, and apothecary. While Moon + Arrow does not specialize in fabric, it embodies the artisan influence brought about by the 2015 renovation of Fourth Street. 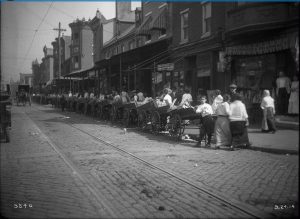 Before they were banned in the 1950s, many immigrants made a living by selling dry goods out of pushcarts. This 1914 photo shows a line of pushcarts and merchants on Fourth and Fitzwater Streets. (PhillyHistory.org) 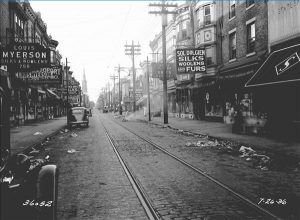 Fourth Street was once covered with over five hundred pushcarts. This photo of South Fourth Street, spanning from South Street to Christian Street, was taken in 1936, after most fabric businesses moved from pushcarts to store fronts. (PhillyHistory.org)

As it grew, the Fourth Street business community weathered and responded to world events. In 1905, thousands of people marched on Fourth Street in mourning for the victims of the pogroms against Jews in Russia. In 1918, the worldwide influenza epidemic hit densely populated areas like Fourth Street especially hard. Many businesses voluntarily closed and helped distribute food and supplies to the needy. During the Great Depression (1929-41), fabric businesses on Fourth Street remained prosperous because people who could no longer afford to buy ready-made clothing from department stores purchased fabric to sew their own garb. Nevertheless, in 1933 merchants formed the South Fourth Street Business Men’s Association in to promote continued trade and address issues such as street sanitation, police security, and hours of operation. 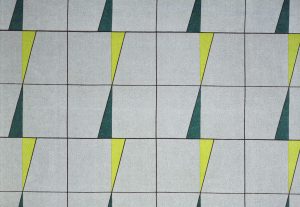 Some stores, such as the drapery and bedding manufacturer J. London & Company, extended their sales nationally. David Stapler  of Stapler’s Fabrics—which started as a pushcart in 1892—became an ambassador for exclusive fabrics and textiles inspired by Philadelphia’s history and art. David & Dash made custom textiles for Atlantic City hotels and grew rapidly into a business with designs featured in museums and university collections, including The Design Center at Philadelphia University and the Textile and Costume Collection at Jefferson University. Internationally, Samuel Goldberg, of Sam Goldberg’s Fabrics, traveled from the streets of Philadelphia to Europe, Latin America, and Asia to hand-pick fabric choices for his clients. Goldberg’s personal touch and stylistic eye attracted the business of public figures like Jacqueline Kennedy (1929-94) and couture designers like Christian Dior (1905-57). 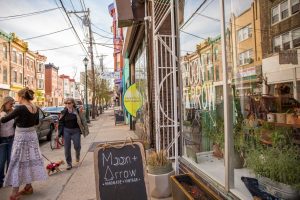 Moon + Arrow is a socially-responsible and environmentally conscious boutique for handmade and vintage artisan materials. Colorful boutiques like this one now populate Fabric Row. (Visit Philadelphia) 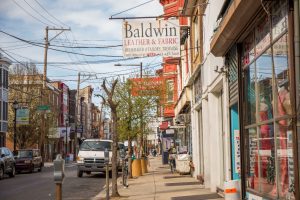 Danielle D’Amelio is an M.A. student in the Department of English at Rutgers University-Camden.

Lelyveld, Nina. “Styling a Storied Street’s Future: It has an Old World Feel, and a New Name—Fabric Row.” The Philadelphia Inquirer, October 2, 1996.

Palmer, Michele Winitsky. “The Fabric of Our Lives: A History of Philadelphia’s South Fourth Street.” The Fabric Museum. 2014.