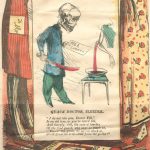 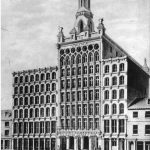 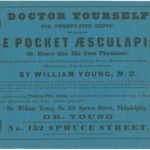 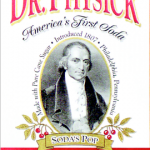 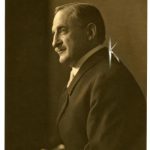 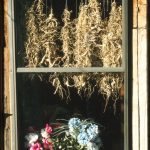 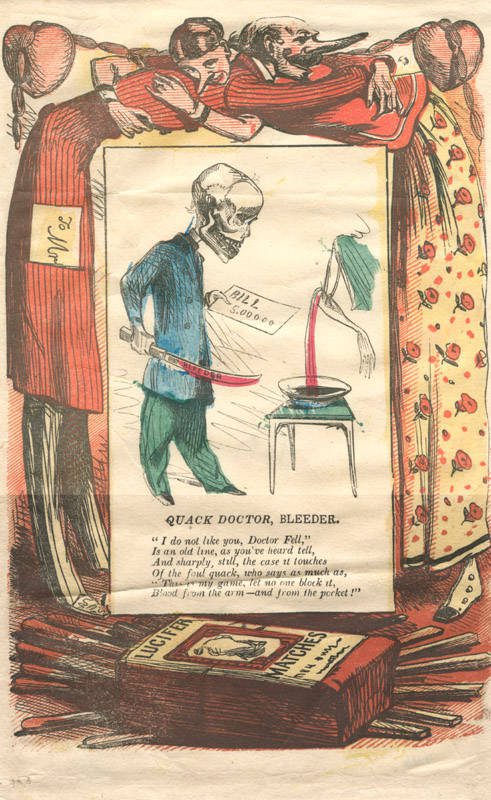 Home remedies became popular in the eighteenth century as a reaction to the standard treatments of the day. With no knowledge of bacteria and viruses, illnesses were blamed on “miasmas,” or clouds of toxic air. Treatments of the day involved eliminating toxins from the body through the use of purgatives or bloodletting, which often worsened the condition and at times hastened death. 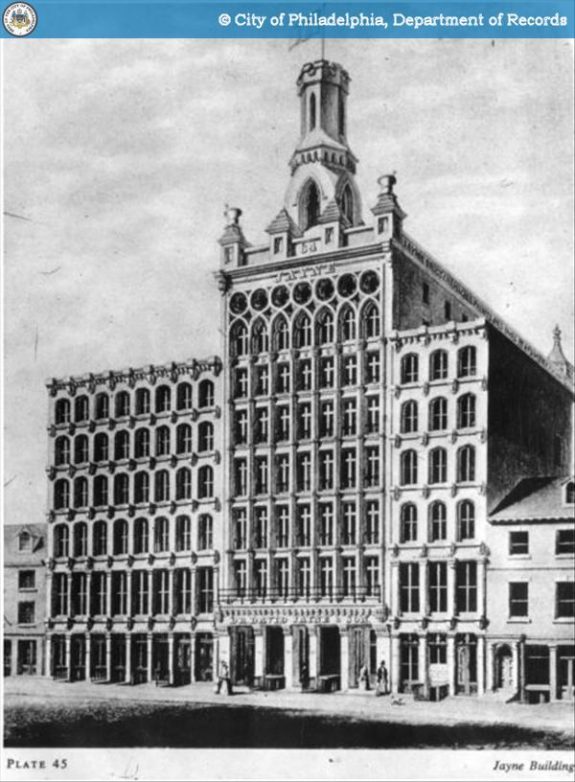 One of the most successful marketers of patent medicine in the nineteenth century was Dr. David Jayne, a University of Pennsylvania-educated physician. Jayne originally operated a small rural clinic in Salem, New Jersey, but the popularity of his tonics led to a move to Philadelphia in the 1830s. In 1843, he began publishing a medical almanac that heavily marketed his own products, including Jayne’s Tonic Vermifuge for parasitic worms and Jayne’s Carminative Balsam for stomach ailments. More than half a billion of these almanacs sold over the next century. Jayne’s company grew so large in the years following his first almanac that no commercial building in the city was big enough for it. In 1850, the company moved into a massive new headquarters on Chestnut Street. The building stood eight stories tall and was topped by a two-story Gothic tower that housed the nation’s first observation deck. Jayne Family Medicine entered a decline in the twentieth century and by the 1940s, it ceased printing its almanac. The Jayne Building’s tower was lost in a fire in 1872, but the rest of the building remained standing until 1958, when it was demolished during the construction of Independence National Historical Park. 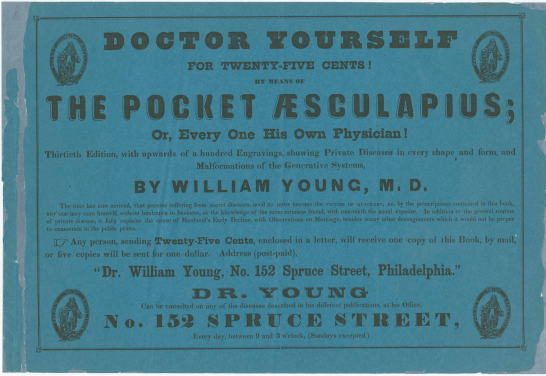 Doctor Yourself with The Pocket Æsculapius

Medical almanacs were very popular in the eighteenth and nineteenth centuries, during the medical profession’s infancy. These almanacs detailed diseases and the recommended treatments for them, usually a combination of herbs or, later, the publisher’s own proprietary concoctions. Physicians of the time often prescribed purgatives or bloodletting as cures for illnesses, actions that often only hastened the patient’s death and led to widespread distrust of the medical profession. This 1851 advertisement promises to prevent “victims of quackery” and make “every one his own physician!” 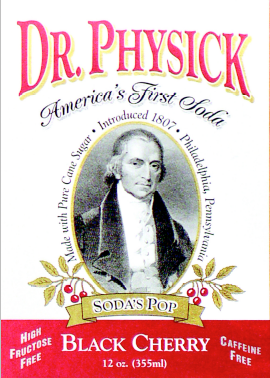 Dr. Phillip Syng Physick was one of the earliest surgeons in Philadelphia. He attended the University of Pennsylvania and the University of Edinburgh in Scotland. In 1793, a year after his return to Philadelphia, the city was ravaged by a yellow fever epidemic that killed nearly 10 percent of the population. Physick worked with celebrated physician Benjamin Rush to treat the disease, even after contracting it himself. Over the span of his career, Physick invented several techniques and devices to advance medical science, including absorbent catgut sutures and an early stomach pump. Physick also served as the first chair of surgery at the University of Pennsylvania as well as working as a surgeon for the Philadelphia Almshouse.

Physick also developed an artificially carbonated beverage for treating stomach ailments. For $1.50 per month, patients in 1807 could drink a daily glass of Dr. Physick’s soda, sweetened with fruit syrup to improve palatability. The drink proved popular both a home remedy and a soft drink. It is considered to be the forerunner to America’s nineteenth-century soft drink boom. In 2007, a bottled version of Dr. Physick’s soda became available for purchase in historic sites and other venues throughout the city, recreated by a descendant of the doctor. 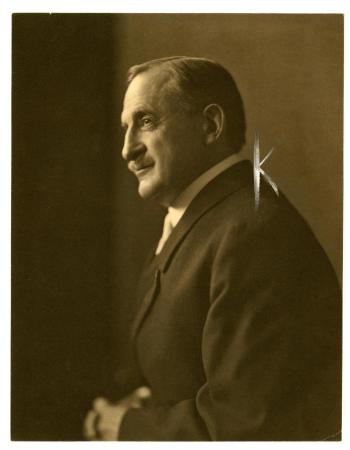 The first commercially prepared root beer was sold as a remedy for calming the nerves by Charles E. Hires. A pharmacist by trade, Hires based the beverage on a tea he sampled in New Jersey while on his honeymoon. Hires’ original product was a root- and berry-based extract that had to be mixed with sugar, water, and yeast before consumption. It was sold to crowds at the Centennial Exhibition of 1876 and eventually the home market. Unsatisfied with selling an extract that required preparation, Hires developed early versions of the soda fountain and fountain syrup. Through an extensive advertising campaign, Hires Root Beer became one of the most popular soft drinks in the nation, especially during Prohibition when it was advertised as a healthy alternative to beer. 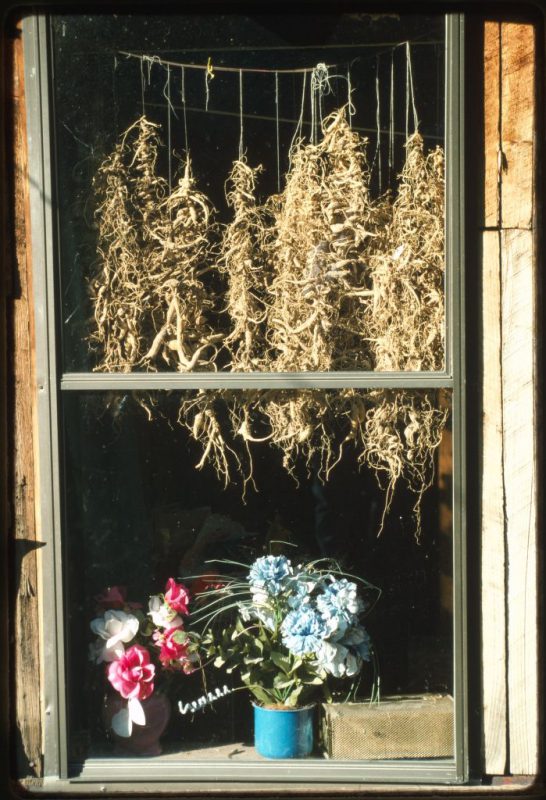 An influx of East Asian immigrants into Philadelphia in the twentieth century brought renewed interest in home remedies and traditional medicine. The root of the ginseng plant has long been prized in East Asian countries for its purported immune support and stimulant properties. It is used to fight cold and flu infections and a myriad of other ailments. Many stores in Philadelphia's Chinatown sell ginseng, both dried and in preparations such as teas. Depending on the variety and quality of the root, it can be pricey. 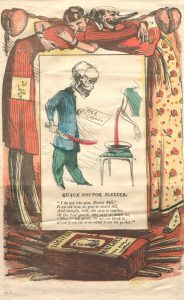 Medical treatments in the eighteenth and nineteenth century often included bleeding and other purgative methods. The inefficacy of these treatments led to the popularity of home remedies. (Library Company of Philadelphia) 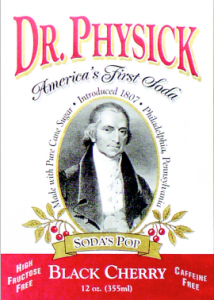 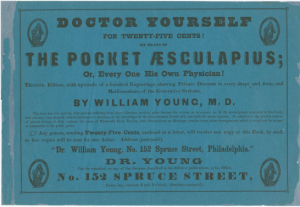 Books of home remedies were published in the city and advertised in local publications. (Library Company of Philadelphia) 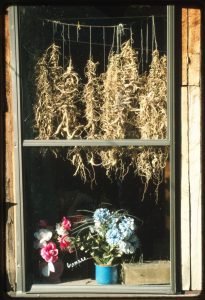 Ginseng is used extensively in traditional East Asian medicine, which became popular in the twentieth century with the influx of East Asian immigrants into the city. (Library of Congress)

Susan Hanket Brandt holds a Ph.D. in history from Temple University and is an adjunct professor of history at the University of Colorado, Colorado Springs. Her 2013 dissertation, “Gifted Women and Skilled Practitioners: Gender and Healing Authority in the Delaware Valley, 1740–1830,” includes information on home remedies. Her article, “ ‘Getting into a Little Business’: Margaret Hill Morris and Women’s Medical Entrepreneurship during the American Revolution,” appeared in the fall 2015 issue of Early American Studies.

Culin, Stewart, The Practice of Medicine by the Chinese in America. Philadelphia: reprinted from The Medical and Surgical Reporter, 1887.

Dillon, Clarissa, “A Large, an Useful, and a Grateful Field”: Eighteenth-Century Kitchen Gardens in Southeastern Pennsylvania, the Use of the Plants, and Their Place in Women’s Work. Ph.D. diss., Bryn Mawr, 1986.

Tennent, John. Every Man His Own Doctor; or, The Poor Planter’s Physician. 4th ed. Philadelphia: Reprinted, B. Franklin, 1736.

Mütter Museum of the College of Physicians of Philadelphia, 19 S. Twenty-Second Street, Philadelphia.