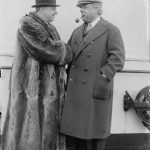 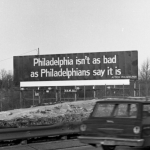 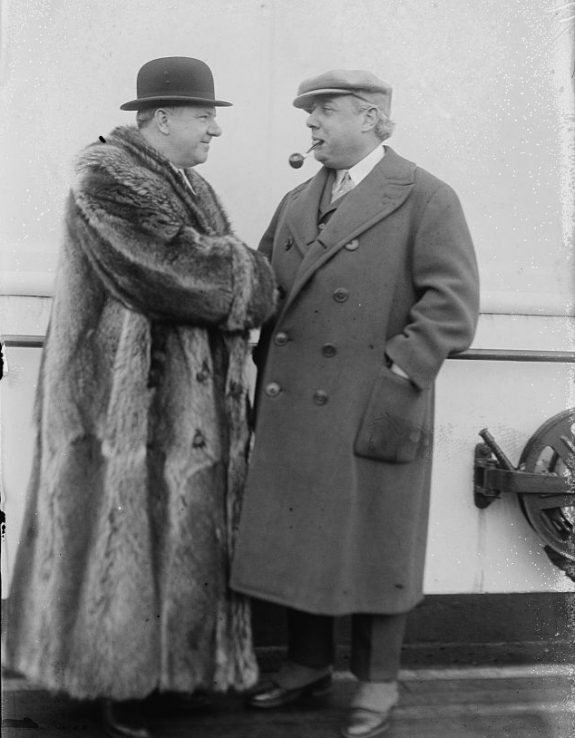 Actor W. C. Fields (1880-1946) suggested the sardonic phrase “I’d Rather Be in Philadelphia” as an epitaph for himself in a 1925 Vanity Fair article. Fields, born in Philadelphia, launched his entertainment career in venues around the Philadelphia area, performing as a silent, juggling “tramp hobo” character. By the 1920s, Fields incorporated storytelling and comedy into his routines and began to transition into film and radio. Philadelphia became a frequent target for his pointed jabs, which played on the city’s reputation as an old-fashioned den of corrupt politics. This photograph shows Fields, left, with theater producer Philip Goodman (1886-1941) in the 1920s. His words helped secure Philadelphia’s place in American pop culture long after his death and continued to be used in television, music, and film into the twenty-first century. 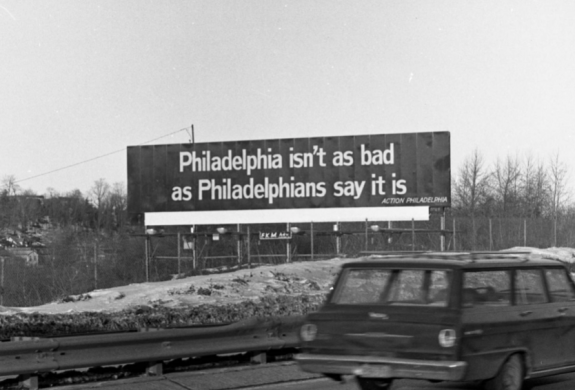 “I’d Rather Be in Philadelphia” cemented the city’s image in American pop culture as a dreary haven for corrupt politics well past the death of W. C. Fields. In response, city marketing and tourism groups combatted this portrayal with their own campaigns. In 1969, a group of bankers and executives formed a new civic group, Action Philadelphia, to promote the city in the face of declining business and property values. Advertising agents hired by the group created a play on another of W. C. Fields’ quips about visiting the city and finding it closed on Sunday (a reference to Pennsylvania’s Blue Laws), joking instead that “I visited Philadelphia last week. It wasn’t as bad as Philadelphians say.”

A shortened version of this slogan appeared on a billboard along the Schuylkill Expressway near Conshohocken beginning in January 1970. The humorous sign initially met with criticism from residents who felt it exacerbated the negative perception of Philadelphia, but it soon gained cult status and was recreated on buttons and bumper stickers. Action Philadelphia created several other campaigns for the city before folding in 1971, but the direct rebuttal to Fields’ remarks remains the group’s most recognizable.

I’d Rather Be in Philadelphia

The expression “I’d rather be in Philadelphia” is derived from a fictional epitaph that locally-born entertainer W.C. Fields (1880-1946) proposed for himself in Vanity Fair magazine in 1925: “Here lies W.C. Fields. I would rather be living in Philadelphia.” By implying that Philadelphia would be slightly preferable to the grave, the joke tapped a vein of critical commentary about the city in the nineteenth and twentieth centuries. Variations of the witticism persisted in popular culture, but it did not ultimately find a place on the entertainer’s tomb. 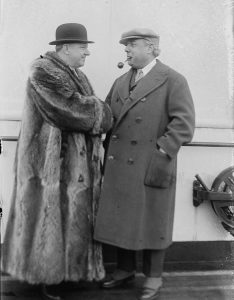 Philadelphia-born actor W. C. Fields, shown left in the 1920s with theater producer Philip Goodman, originated the phrase “I’d Rather Be in Philadelphia” in a 1925 Vanity Fair article. The actor suggested the sardonic expression as an epitaph for himself. (Library of Congress)

Fields often lampooned Philadelphia, the boyhood hometown that he left to follow a career in show business. With the given name William Claude Dunkenfield (or Claude William, according to some sources), Fields was born in Darby, Delaware County, and grew up in a succession of rented row houses in West and North Philadelphia. After only a few years of school, he picked up odd jobs available to boys of his era: assisting in a cigar shop, hawking newspapers, delivering ice, shucking oysters, racking balls in billiard halls, peddling produce, and carrying cash between departments in the Strawbridge and Clothier store on Market Street. Frequently at odds with his father, he left home for at least a few months of his youth—a period he later embellished into tall tales of life on the streets as a vagabond.

Fields found his calling as an entertainer in Philadelphia’s theater district, which at the time thrived on North Eighth Street between Race and Vine. Captivated by the vaudeville shows of the 1890s, he taught himself to juggle and developed an act as “tramp juggler,” a silent hobo character who could adeptly toss cigar boxes, which became a hallmark of his act. After getting his start in venues like Natatorium Hall at Broad Street and Columbia Avenue, Plymouth Park near Norristown, and Fortescue’s Pier in Atlantic City, he attracted the notice of promoters of touring burlesque and vaudeville shows. With them, he performed nationally and internationally, gaining the skill and acclaim that led him to Broadway and the famed Ziegfeld Follies. The stage name he adopted, “W.C. Fields,” became his legal name in 1908.

By the 1920s, when Vanity Fair published his imagined epitaph, Fields was transitioning from pantomime juggler to character actor, comedian, and storyteller, not only on stage but in the emerging mediums of radio and the movies. Barbs about Philadelphia became a common part of the act. “I once spent a year in Philadelphia,” he said. “I think it was on a Sunday.” Or, “Anyone found smiling after the curfew rang was liable to be arrested.” In a later feature film, My Little Chickadee (1940), a character played by Fields described his last wish: “I’d like to see Paris before I die. Philadelphia will do.” His humor struck a chord among audiences accustomed to thinking of Philadelphia as sedate, old-fashioned, and corrupt—a perception that had been nurtured by such commentators as Charles Dickens (1812-70), who described the city as “rather dull and out of spirits”; Lincoln Steffens (1866-1936), who identified Philadelphia as “the most corrupt and the most contented” of cities; and Henry James (1843-1916), who referred to its “bourgeois blankness.” 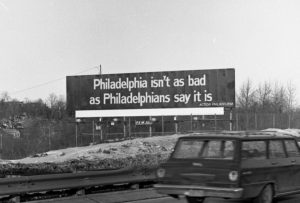 Philadelphia’s tourist and marketing campaigns attempted to overcome the image of Philadelphia that Fields created in his work. This billboard stood on the Schuylkill Expressway near Conshohocken in the 1970s, serving as a humorous rebuttal to the city’s popular portrayal by local residents. (Special Collections Research Center, Temple University Libraries)

In later years, place-marketing and tourism promotion campaigns worked vigorously to counteract the image of Philadelphia embedded in Fields’ comedy. Still, variations of “I would rather be living in Philadelphia” persisted. While hospitalized in Washington after the 1981 assassination attempt on his life, President Ronald Reagan (1911-2004) scribbled on a note, “All in all, I’d rather in be in Philadelphia.” Similar phrases cropped up in dialogue in the movie Die Hard (1988) and the television series Lois and Clark: The New Adventures of Superman (1993). “I’d Rather Be in Philadelphia” served as a title for a 1983 compilation rock album, a 1993 mystery novel by Gillian Roberts, and a 2007 episode of the television series Gilmore Girls. On the internet in the early decades of the twenty-first century, the expression appeared frequently as a touchstone for bloggers and as the title for a Twitter feed.

The comedy of W.C. Fields, while not flattering to Philadelphia, contributed to the city’s place in American popular culture even after the entertainer left the city behind. After his death, the marker on his vault at Forest Lawn Memorial Park in Glendale, California, bore the simple inscription: “W.C. Fields, 1880-1946.”