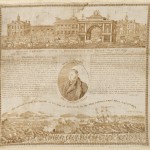 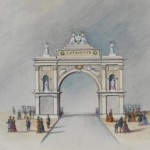 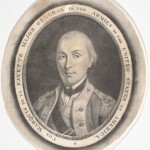 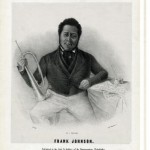 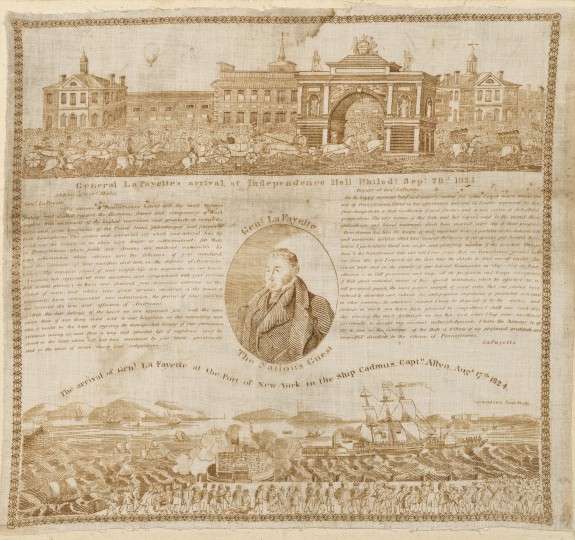 Public fascination with Lafayette sparked a lively industry in mass-produced souvenirs during his 1824-25 tour. The Saturday Evening Post, published in Philadelphia, commented: “Everything is Lafayette, whether it be on our heads or under our feet. We wrap our bodies in Lafayette coats during the day, and repose between Lafayette blankets at night.” This souvenir handkerchief, produced in Germantown, depicts Lafayette’s arrival in Philadelphia. The caption beneath the top image includes the new name given to one room inside the old Pennsylvania State House during the weeks leading to Lafayette’s arrival: Independence Hall. The depiction of the old Pennsylvania State House, with a temporary triumphal arch in the foreground to welcome Lafayette, shows aspects of its appearance by 1824. The original arched piazzas on either side of the building had been demolished and replaced with practical, fireproof office buildings. The building’s distinctive steeple is absent, having rotted away by the 1780s. Lafayette’s visit helped to awaken renewed interest in the old State House as a place of historic significance. In 1828, the Philadelphia City Councils commissioned a replacement steeple and insisted that it should resemble the original as closely as possible. 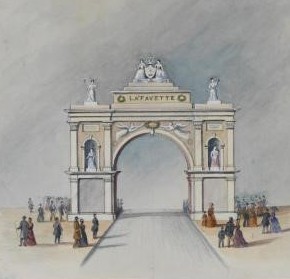 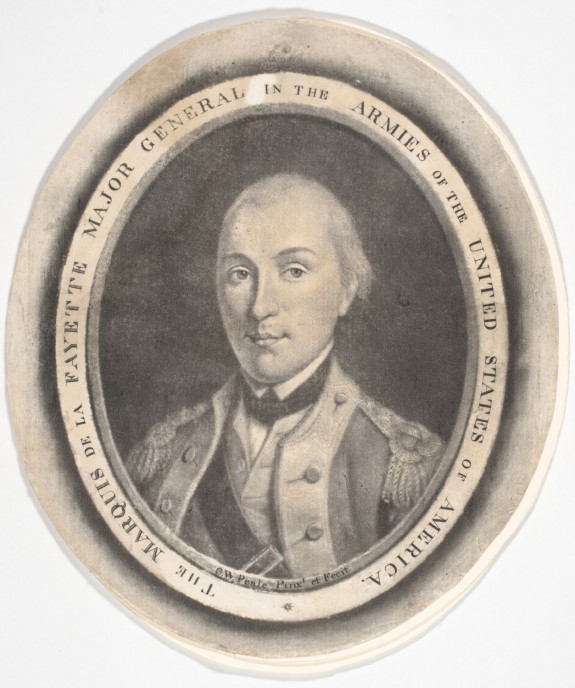 Lafayette, Volunteer for the American Revolution

This mezzotint print, created in 1787 by the artist Charles Willson Peale, depicts the Marquis de Lafayette as a major general in the Armies of the United States. Lafayette arrived in Philadelphia to volunteer for service in July 1777. Wounded at the Battle of Brandywine in September, he gained command of his own division and spent part of the winter at the encampment of George Washington’s army at Valley Forge. Lafayette and Washington formed a lasting friendship, which the French nobleman honored in 1824 by visiting Washington’s tomb at Mount Vernon. 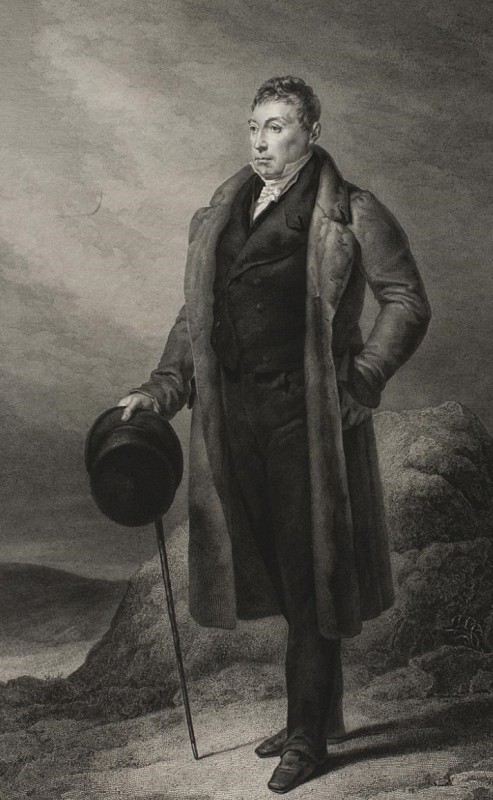 After his enthusiastic reception in Philadelphia in 1824, Lafayette continued to Washington, D.C., where he became the first foreign dignitary to address a joint session of Congress. To honor the occasion, Dutch artist Ary Sheffer presented Congress with a full-length portrait of Lafayette, reproduced in this 1824 engraving by Jean Marie Leroux. The portrait was exhibited in the Capitol Rotunda for thirteen months during 1824-25 and was widely copied by other artists. Lafayette so admired the portrait that he distributed engravings, like this one, as he traveled throughout the United States. 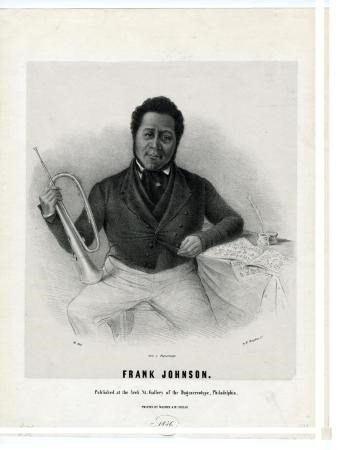 More than two thousand Philadelphians and guests, including Secretary of State John Quincy Adams, attended the “Lafayette Ball” held at the Chestnut Street Theatre on October 4, 1824, the last night of Lafayette’s visit. The music for this auspicious occasion was provided by Philadelphian Frank Johnson, depicted here in an 1846 lithograph, and his popular band of African American musicians. By the 1820s Johnson was gaining national prominence as a musician, composer, and band leader, making him a natural choice to entertain at such a prominent event. Although many sources have described Johnson’s place of birth as the West Indies, recent scholarship has established that he was born in Philadelphia in 1792.

Public fascination with the visit of Lafayette sparked a lively industry in mass-produced souvenirs, such as this handkerchief depicting his arrival at Independence Hall. (Winterthur Museum) 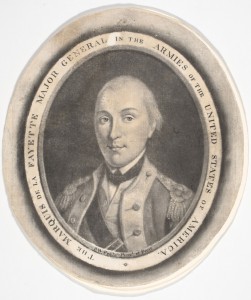 Marquis de Lafayette rose to the rank of Major General in the Continental Army. During his service, he and George Washington formed a life-long friendship. (Philadelphia Museum of Art)

When the Marquis de Lafayette (1757-1834), a French hero of the American Revolution, returned to the United States in 1824-25, Philadelphians joined in a wave of nationwide affection for the nobleman who had volunteered for service in the Continental Army at the age of 19. Lafayette’s return to the region stirred increasing regard for preserving relics of the Revolution, especially the old Pennsylvania State House, which began to acquire a new name: Independence Hall.

Lafayette (Marie Joseph Paul Yyves Roch Gilbert de Motier, Marquis de Lafayette) returned to the United States as the “nation’s guest” by invitation of his longtime friend President James Monroe (1758-1831). With the Declaration of Independence nearly fifty years in the past, Lafayette represented a generation of heroes soon to pass from living history into memory. Throughout the United States, his presence touched off elaborate preparations, pageantry, and a lively market for Lafayette keepsakes. The tour, originally intended to last four months, triggered such intense public enthusiasm that Lafayette stayed for thirteen months and traveled to all twenty-four states in the nation. He visited Thomas Jefferson (1743-1826) at Monticello and the Mount Vernon tomb of his general and friend George Washington (1732-99). 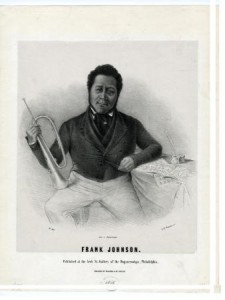 Frank Johnson, a famous musician, composer, and band leader, performed with his African American band at the “Lafayette Ball,” a major social event during Lafayette’s last night in Philadelphia. (Historical Society of Pennsylvania)

Lafayette came to the Philadelphia region twice, near the beginning and end of his tour. In September 1824, after arriving in New York from France, he journeyed through northern New Jersey to Trenton, where he crossed the covered bridge over the Delaware River to Morrisville, Pennsylvania. Entertained at an evening ball at Holmesburg and then lodged overnight at the Frankford Arsenal, the next day Lafayette entered Philadelphia in a carriage pulled by six cream-colored horses and accompanied by a three-mile-long procession of citizens on horseback, public officials from Pennsylvania and New Jersey, military units, veterans of the Revolution, tradesmen, and farmers from the countryside. The parade followed a route carefully planned to pass impressive neighborhoods and landmarks and cheering throngs of onlookers on the way to the old State House. Temporary triumphal arches along the route ushered the marchers and riders through Northern Liberties into the city.

For nearly two months, Philadelphians had planned for the moment of Lafayette’s arrival. For his reception, an arrangements committee commissioned architect William Strickland (1788-1854) to refurbish the room in the old State House where independence had been declared. By that time in a state of neglect, the east room on the building’s first floor attracted renewed attention as it became transformed for the occasion. As Philadelphians acquired new mahogany chairs and sofas, draperies, and carpets to create a suitably lavish reception, they also coined a name for the room: the “Hall of Independence” or “Independence Hall.” Originally applied only to the first-floor room where independence had been declared, over subsequent decades the name became applied to the building as a whole.

Lafayette’s reception in the Hall of Independence, during which he and Philadelphia’s mayor exchanged greetings and reflected on the historic events that transpired where they stood, established a precedent for other nineteenth-century guests, from dignitaries to visiting fire companies. Lafayette’s eight-day visit also created new attachments to the memory of the American Revolution for thousands of schoolchildren who assembled in the State House Yard to be in his presence, for residents who attended a celebratory civic ball at the Chestnut Street Theatre, and for those who adorned themselves and their homes with mass-produced souvenirs. “Everything is Lafayette, whether it be on our heads or under our feet,” the Saturday Evening Post commented in the aftermath. “We wrap our bodies in Lafayette coats during the day, and repose between Lafayette blankets at night.” 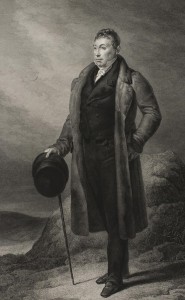 Dutch artist Ary Sheffer presented Congress with this full-length portrait of Lafayette. Lafayette enjoyed the painting so much that he distributed copies of it wherever he stopped during his stay. (Philadelphia Museum of Art)

Departing Philadelphia, Lafayette traveled by steamboat on the Delaware River to Chester, Pennsylvania, which celebrated him with a parade and banquet, and from there to Wilmington, Delaware. When he returned to the region for a somewhat longer, but quieter, stay near the end of his tour in July 1825, his itinerary included visits to Germantown, Mount Airy, and Chestnut Hill. On the way south for departure from Washington, he stopped in West Chester (where an estimated ten thousand people gathered to witness his procession) and joined military units and aged veterans in a tour of the area of the Battle of Brandywine, where he had been wounded during the Philadelphia campaign.

Lafayette’s tour left lasting effects around the United States in the form of towns, counties, colleges, and streets bearing his name, projects to create monuments, and new regard for material relics of the American Revolution. In Philadelphia, historically-minded citizens formed the Historical Society of Pennsylvania in 1824. Some who served on the arrangements committee for Lafayette’s visit mobilized again 1828 to replace the steeple on Independence Hall, which had lacked this distinctive feature since the original rotted away more than four decades before. The new steeple served contemporary needs for a clock and bell, but the Philadelphia City Councils insisted that it must resemble as closely as possible the building as it stood at the time of the American Revolution.