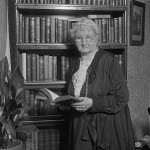 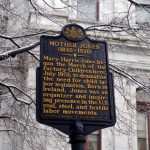 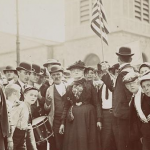 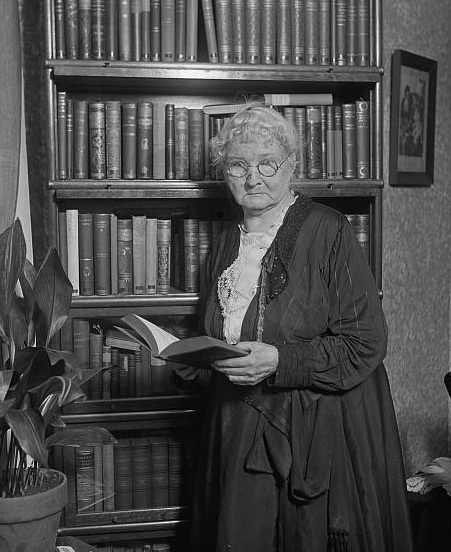 Born in 1837 in County Cork, Ireland, Mary Harris immigrated as a teenager to Canada and, later, to the United States. She found work as a schoolteacher and then as a dressmaker. During her time in Memphis, Tennessee, she married George Jones and gained the last name that became part of her legacy. After her husband and their four children were lost to yellow fever, Jones lost her dress shop to the Great Chicago Fire. The tragedy spurred her to political action. Jones joined the Knights of Labor, precursor to the Industrial Workers of the World, and began staging strikes and protests on behalf of laborers. A devout Catholic, Jones believed good wages for working men would allow women to stay home with their children, who should be in school and not forced to work in factories. Jones is remembered for her fight against child labor, particularly the Children’s Crusade march of children who worked in mills and mines. Though Jones was not able to arrange a meeting with President Theodore Roosevelt as part of the march, it brought attention to child labor conditions, and Roosevelt referred to “Mother” Jones as “the most dangerous woman in America.” Jones, shown here in her later years, died in 1930 at age 93 and was buried in a miners cemetery, alongside miners who were killed in strike-related violence. 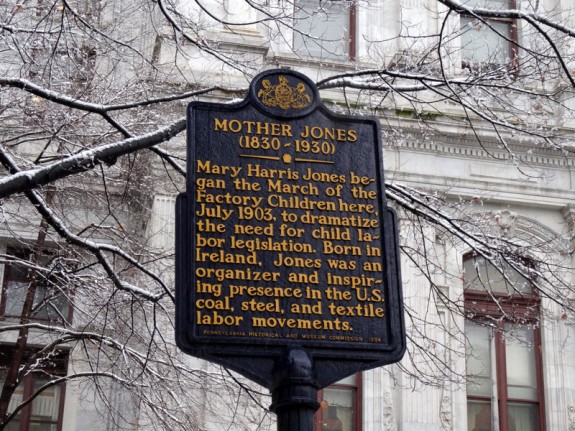 The Mother Jones marker on the north side of Philadelphia City Hall. Irish baptismal records show her born in 1837, though as an adult she claimed she was born in 1830 — the birth year used on the marker. (Photograph by Donald D. Groff) 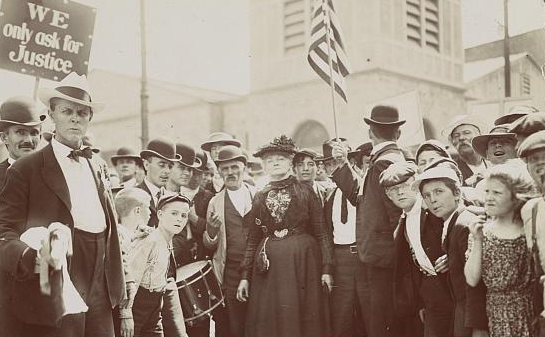 Mary Harris “Mother” Jones (c. 1837–1930), an Irish-born labor organizer, arrived in the Kensington section of Philadelphia in June 1903 to rally support for the area’s textile workers, particularly the city's many child laborers. On July 7, 1903, she began the three-week March of the Mill Children alongside hundreds of young strikers and their parents.

March participants made the nearly one-hundred-mile trek from Kensington to New York City, receiving food and shelter from allies along the way. Although numbers dwindled as the journey continued, Jones and five other marchers reached then-President Theodore Roosevelt’s (1858–1919) Sagamore Hill summer home on July 29th. They were turned away by his secretary and forced to return to work.

Despite this dismissal, the marchers’ actions inspired others to join the cause: The National Child Labor Committee formed in 1904 to support regulation. Advocacy continued for the next several decades until Franklin D. Roosevelt (1882–1945) passed the Fair Labor Standards Act of 1938, which included measures to protect young workers.

March of the Mill Children 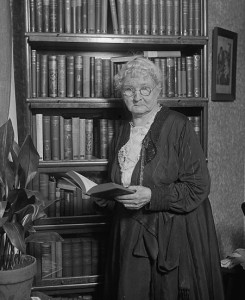 Mary Harris “Mother” Jones was a relentless champion of workers’ rights and led the fight against child labor. (Library of Congress)

The March of the Mill Children, the three-week trek from Philadelphia to New York by striking child and adult textile workers launched on July 7, 1903, by Mary Harris “Mother” Jones (1837-1930), trained public attention on the scourge of child labor and energized efforts to end it by law.

Jones, the storied Irish-born labor organizer, came to the Kensington section of northern Philadelphia in mid-June 1903 to rally support for some 46,000 textile workers, including many youths, who were staging the largest strike in city history to demand a reduced work week of 55 hours and a ban on night work by women and children. Told that newspapers were ignoring child labor because mill owners were stockholders, she retorted, “I’ve got stock in these little children, and I’ll arrange a little publicity.”

A fierce opponent of child labor and a masterly tactician, Jones seized on a march of young workers as a way of publicizing the strike while also exposing the evils of child labor and the excesses of industrial capitalism. Children were sent to work in coal mines and mills to supplement meager family incomes and as a result suffered stunted growth and maiming injuries. The 1900 census reported that one-sixth of American children under age 16 were employed, likely a gross undercount. More children worked in textile manufacturing than in any other trade. By 1900, textile factories and allied trades dominated Kensington, an early manufacturing center. 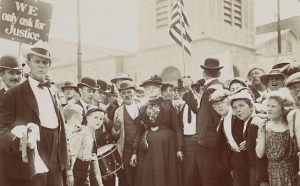 Mary Harris “Mother” Jones (c. 1837–1930) led a three-week trek from Philadelphia to New York City to advocate the end of child labor and harsh factory conditions. Child textile workers and their parents join her in this 1903 photograph as they prepare to march. (Library of Congress)

At a rally in Kensington’s Labor Lyceum Hall (2914 N. Second Street), Jones revealed plans to lead an “industrial army” of hundreds of child strikers and their parents on a march of nearly 100 miles to New York City to dramatize their cause. She later expanded the itinerary to include a pilgrimage to President Theodore Roosevelt’s Long Island summer home to plead for child labor laws.

The marchers left Kensington to the sound of fifes and drums, heading to Bristol and Morrisville in Pennsylvania. From there, dwindling in numbers, fed and sheltered by unionists, farmers, socialists, and other allies, the ragtag crusaders slogged through heat and rain into the manufacturing belt of New Jersey, soliciting donations and staging rallies often attended by thousands. Their route extended from Trenton, Princeton, and New Brunswick north to Elizabeth, Newark, and Paterson, then into Passaic and Jersey City.

Reaching New York City on July 23, sixty marchers paraded up Second Avenue by torchlight. On Coney Island three days later, Jones put children in animal cages to dramatize what she labeled bosses’ attitudes toward workers. She and a delegation of five arrived July 29 at Roosevelt’s Sagamore Hill summer home, where they were rebuffed by his secretary. In the meantime, even before the crusade’s end, strikers thwarted by the manufacturers’ strategies and their own factional divisions had begun returning to the mills.

Nevertheless, the march advanced efforts to abolish child labor. In 1904, the National Child Labor Committee formed for advocacy and action. A year later Pennsylvania toughened its child labor laws, though it took another thirty-three years, until the New Deal presidency of Franklin D. Roosevelt, for nationwide legislation protecting young workers, the Fair Labor Standards Act of 1938, to replace a patchwork of state laws.

Gail Friedman holds a Master’s Degree in Public History from Temple University. She worked as a community planner for Bucks County, Pennsylvania, from 1999 to 2015.

Currie, Stephen. We Have Marched Together. Minneapolis: Lerner Publications Company, 1997.

Plaque commemorating the centennial of the March of the Mill Children’s arrival in Princeton, Palmer Square, Princeton, N.J.