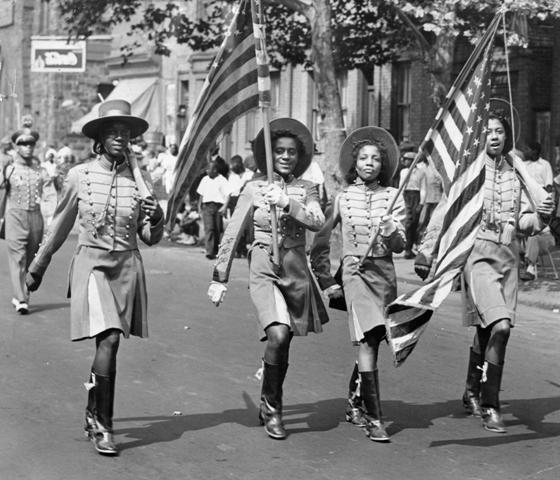 Labor Day festivities grew more elaborate in Philadelphia in the 1940s to include increasingly extravagant celebrations, primarily with parades by worker organizations, unions, and fraternal orders. The four young women marching on Christian Street in this image from the 1941 Labor Day parade were part of the celebratory color guard for the Quaker City Drum and Bugle Corps, a subgroup of Philadelphia's Improved Benevolent and Protective Order of Elks of the World (IBPOEW). The IBPOEW began in 1897 as an African American alternative to the racially restrictive Order of Elks. The Philadelphia IBPOEW Quaker City Lodge #720 began in 1926 and accepted thousands of working-class African Americans as members. Members of the Quaker City Lodge and their children participated in the Drum and Bugle Corps, wearing elaborate costumes and performing routines to provoke the crowd's excitement. 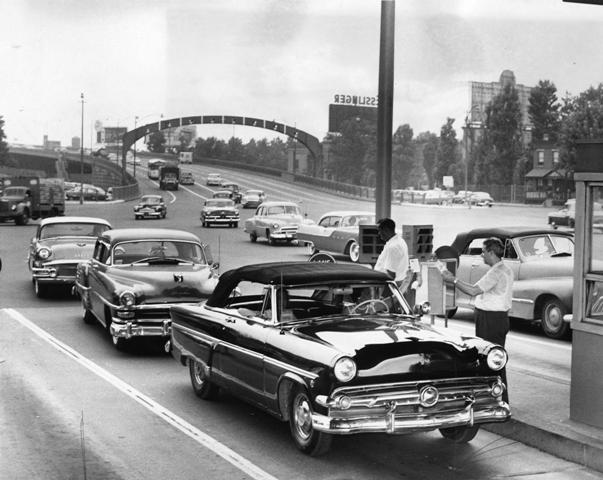 This view from the Camden side of the Benjamin Franklin Bridge shows vehicles leaving Philadelphia on the Friday before Labor Day in 1953. As thousands of families left Pennsylvania for the New Jersey shore, police and rescue workers throughout the Mid-Atlantic came up with a campaign to get people to drive slower. The bridge maintenance workers pictured here warned drivers about the dangers of speeding and gave them a pamphlet containing safety tips for traveling. 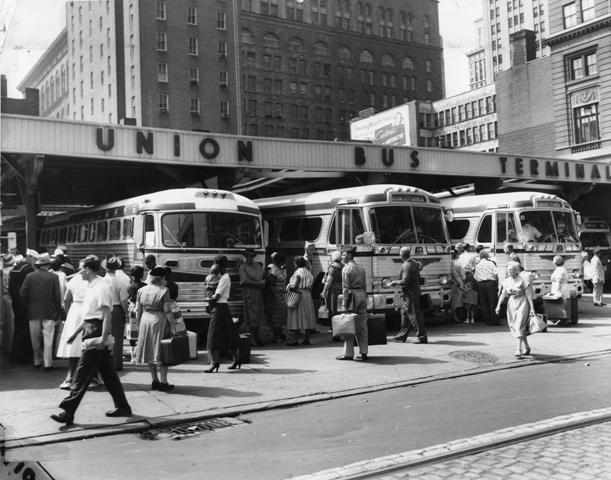 Crowds of people opted to leave the city of Philadelphia over the Labor Day weekend to travel to the beaches of New Jersey. For working-class families, the growing availability of mass transit was welcome, with buses providing cheap transportation away from the city and allowing them to travel with more family members than would fit in a single car. Philadelphia's Union Bus Terminal, located on Filbert and Thirteenth Streets, scheduled additional buses to Atlantic City around Labor Day weekend to handle the volume of travelers. Hordes of people, pictured here on the Friday before Labor Day in 1957, stood in lines at the busy terminal, waiting to board and get a step closer to starting their vacations. 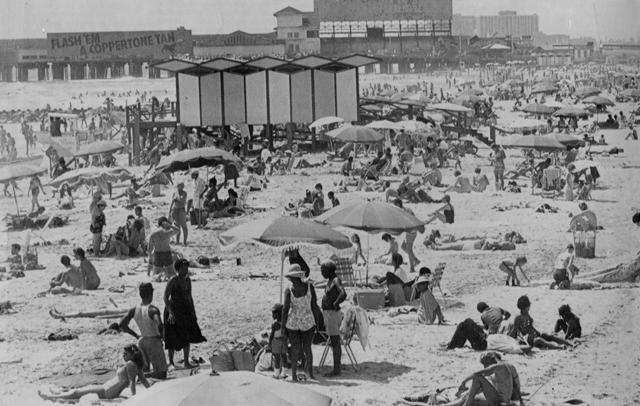 As the destination for some Labor Day travelers, Atlantic City, New Jersey, offered families the opportunity to enjoy a variety of entertainment. Pictured here in 1979, the beaches of Atlantic City first became a popular Labor Day playground in the early twentieth century. The number of people lounging on the beach, walking the boardwalk, and riding amusements declined in the 1950s and 1960s, as crime rates increased, other destinations beckoned, and tourism slipped. The legalizing of gambling in the city in 1976 led to the construction of new casinos and resorts in Atlantic City, drawing more tourists and more entertainment in casino showrooms. 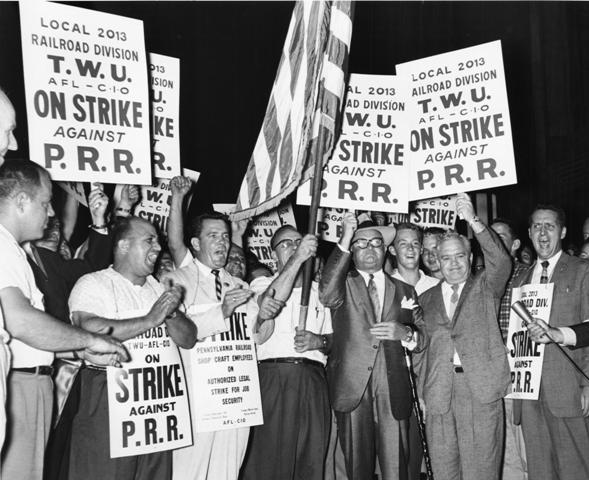 On Thursday, September 1, 1960, members of the Transport Workers Union of America (T.W.U.) began a twelve-day strike against the Pennsylvania Railroad, reinforcing Labor Day's celebration of workers’ rights. The T.W.U. protested the railroad’s attempts to dissolve the position of fireman on new trains and limit employee salary increases. Labor Day fell on the fourth day of the strike, and T.W.U. strikers stood outside 30th Street Station holding banners and noting their grievances as parades and celebrations occurred throughout Philadelphia. Pictured here on the first day of the strike are T.W.U. President Mike Quill (front, wearing a hat) and International Brotherhood of Teamsters officer Frank Sheeran (right of Quill) with union members in front of 30th Street Station. 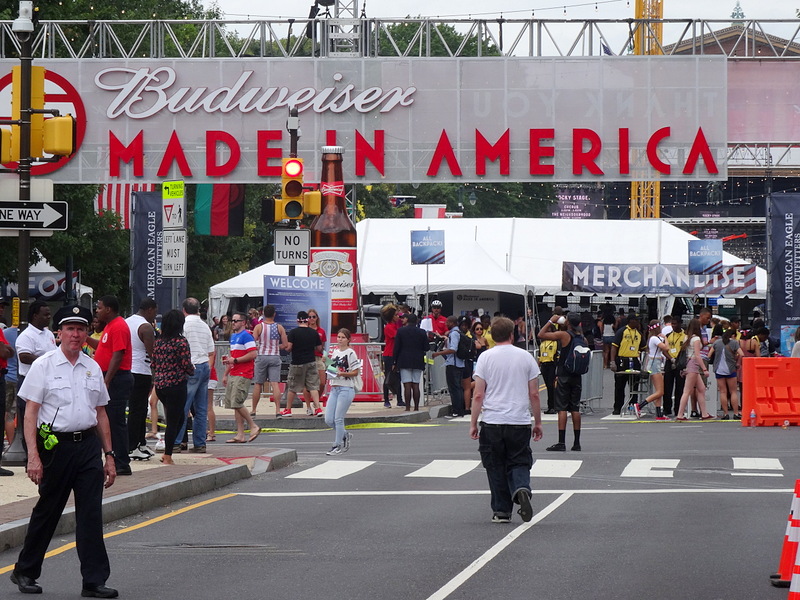 Beginning in 2012, the Made in America music festival on the Benjamin Franklin Parkway became a hallmark event of Labor Day weekend in Philadelphia. In this photograph from August 30, 2014, festivalgoers mill around the entrance to the festival hours before the music was scheduled to begin.
(Photograph by Donald D. Groff for the Encyclopedia of Greater Philadelphia) 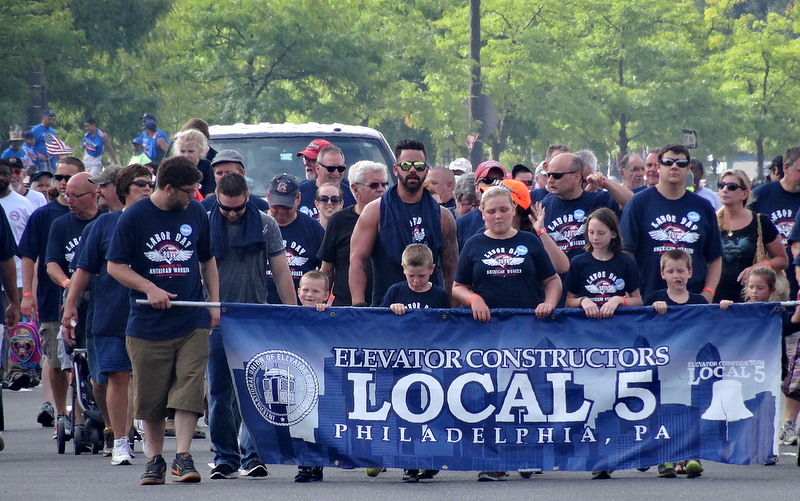 Union members and their families mark Labor Day with a parade on Columbus Boulevard on September 1, 2014. The 27th annual Tri-State Labor Day Parade and Family Celebration began with a rally and staging at a union hall in South Philadelphia, followed by the parade that led to Penn's Landing for a picnic, concert, and celebration. (Photo by Donald D. Groff for the Encyclopedia of Greater Philadelphia) 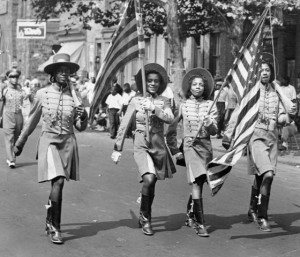 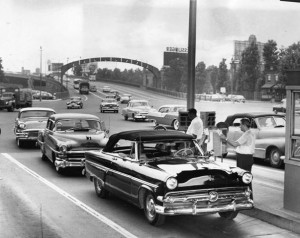 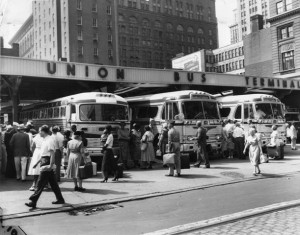 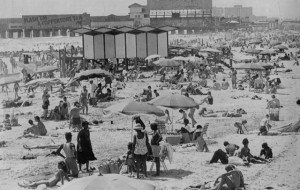 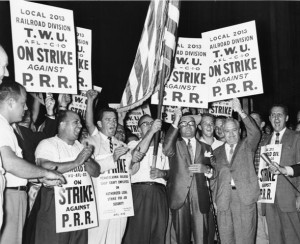 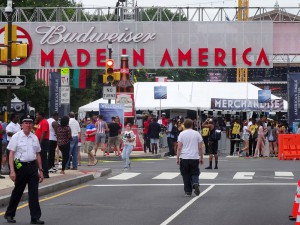 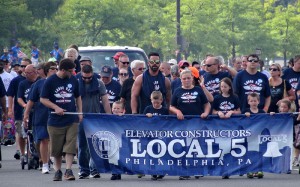