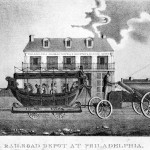 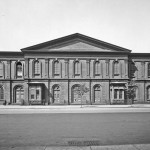 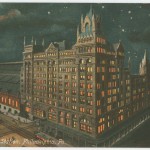 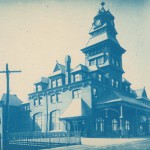 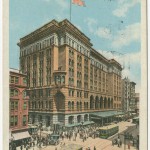 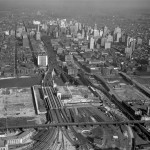 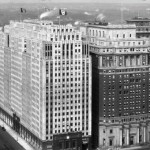 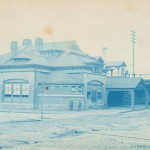 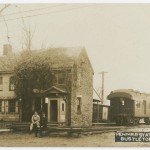 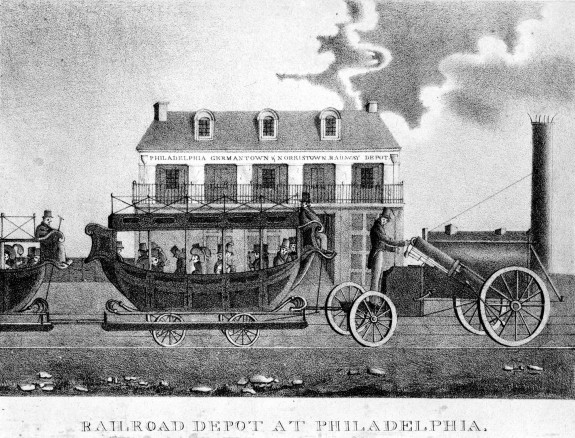 Opened in 1832, this modest station illustrates how the first structures were very small and very simple. Many were converted from houses and other structures. The Philadelphia, Germantown & Norristown was the first railroad to provide passenger service in Philadelphia. 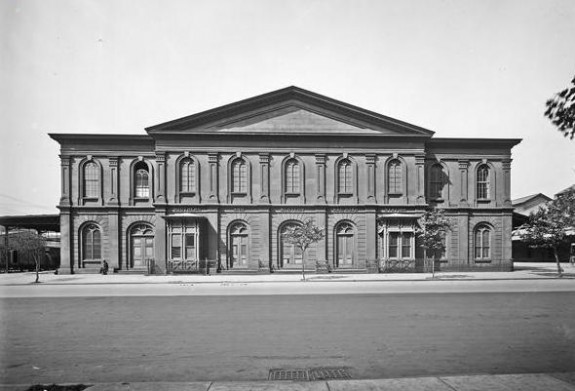 Built as a freight-only addition to the existing Prime Street depot in 1876, this structure remained in use for a century. The Philadelphia, Wilmington & Baltimore was an independent company, headquartered in Philadelphia, that participated with the Pennsylvania and the Baltimore & Ohio railroads in operating a joint service between Washington and New York in the middle of the nineteenth century. 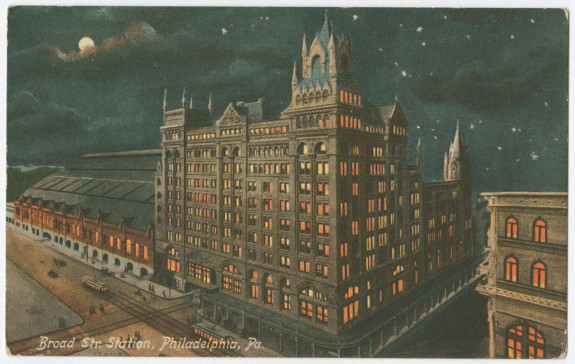 The first of the grand Victorian stations, Broad Street Station was built by the Pennsylvania Railroad in 1881 and expanded in 1891-1892. Train service ended in 1952 and it was demolished the next year. 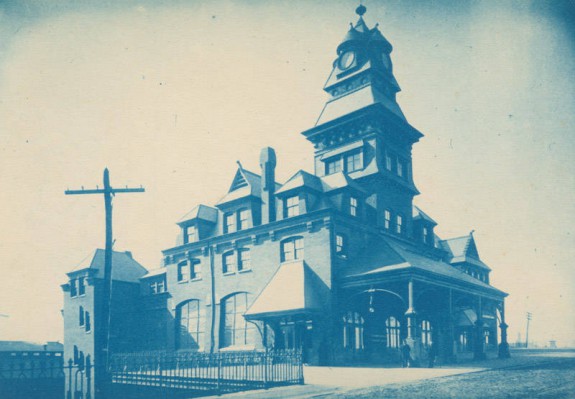 Depot at Twenty-Fourth and Chestnut Street 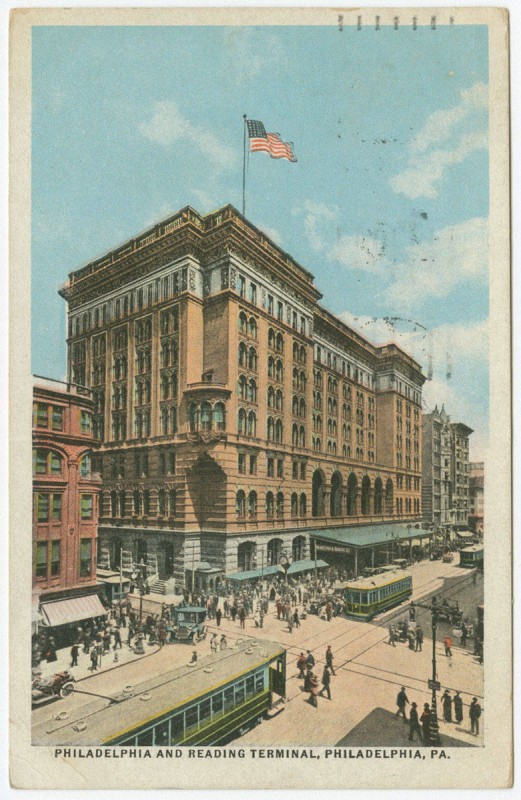 Built by the Philadelphia & Reading to consolidate its services scattered among three outlying mid-century depots, Reading Terminal opened in 1893. It remained in operation until the commuter tunnel opened in 1984. The station and train shed were integrated into the Pennsylvania Convention Center in 1993. 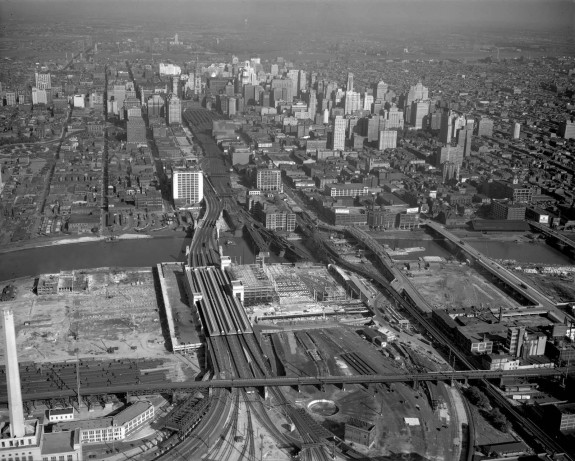 This large station was opened by the Pennsylvania Railroad in 1933 to replace Broad Street Station as its main station in Philadelphia. From the outset, the railroad intended to use the “Pennsylvania Station” moniker but after it called the temporary access to the commuter train platforms (which opened before the main building) “Thirtieth Street,” the name stuck. This image shows the complex under construction in 1932. 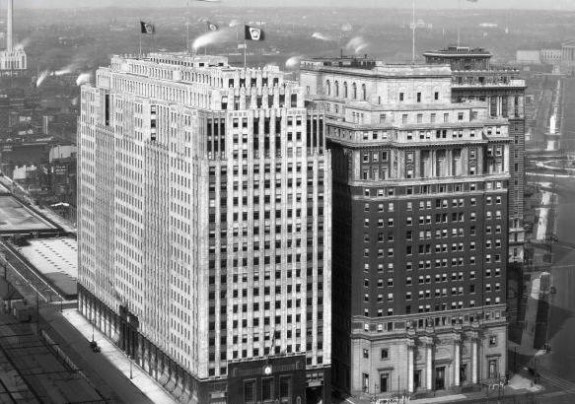 As part of the Pennsylvania Railroad’s plan to replace Broad Street Station (and redevelop the station site and its approaches), Broad Street Suburban Station as an underground terminal for electric commuter trains opened in 1930. In 1984 it was rebuilt as a through station to allow the trains of the former Reading and Pennsylvania railroads to operate as an integrated system by SEPTA. 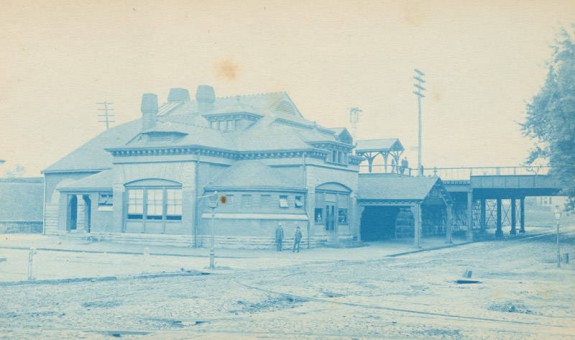 Frank Furness designed a number of stations for the Baltimore & Ohio’s Philadelphia extension including this one at Delaware Avenue in Wilmington, Delaware. The station opened with the line in 1886 and closed when the railroad abandoned passenger service on its Philadelphia route in 1958. 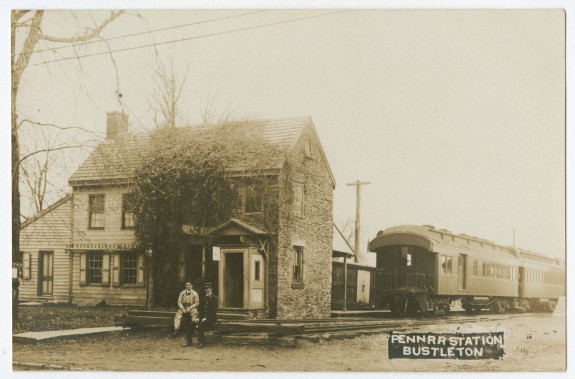 Bustleton Station of the Pennsylvania Railroad

The line to Bustleton was built as a branch of the Philadelphia & Trenton Railroad in 1870 and an old farmhouse was used as the station. Passenger service on the line (then owned by the Pennsylvania Railroad) ended in 1926. This image is from an early twentieth century postcard.

Railroad stations in Greater Philadelphia evolved with the railway industry into a wide variety of forms and functions. For most passengers and casual observers, railroad stations are buildings, but for the railways, these locations are also key operating points for loading and unloading passengers and freight. The vast majority of railroad stations in the Philadelphia region were small and served surrounding local communities, but a few monumental terminals were constructed in Center City Philadelphia and in the downtowns of the region’s secondary cities: Atlantic City, Camden, and Wilmington. 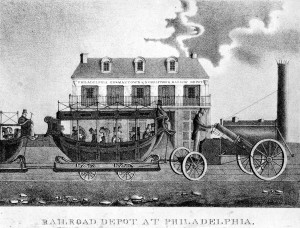 Early train stations in Philadelphia were simple structures, often converted from houses. This example opened in 1832. (Library Company of Philadelphia)

The major passenger stations serving central Philadelphia went through four distinct phases in the city’s history. Initially, during the 1830s and 1840s, small, independent railroads attempted to locate their passenger facilities on the fringes of the built-up portion of the city. Later, in the 1850s, the railways moved their by-then larger depots farther from the business district and began to rely on the new horse-drawn streetcars for final delivery of passengers. The third phase began in 1881, when consolidated railroad systems started to move their much larger passenger facilities back into Center City. Finally, with the opening of Pennsylvania (Thirtieth Street) Station in 1933, a grand station met the operational needs of the railroad and connected multiple forms of transport for the region.

The earliest railroad stations in Center City were very small structures that offered minimal services other than ticketing and baggage facilities. Starting in the 1850s, newer stations became larger and more architecturally elaborate, but for the most part they offered few additional services. The movement away from these mid-century buildings began in 1876 when the Pennsylvania Railroad built a new passenger station at Thirty-Second and Market streets in West Philadelphia and the Philadelphia, Wilmington & Baltimore substantially reconstructed its facility at Prime Street (later renamed Washington Avenue) in South Philadelphia to deal with increased traffic because of the Centennial Exhibition of 1876. These two depots were important transitional structures, built largely on the scale of the mid-century terminals but with far more complex interiors offering more services (such as restaurants). Both these stations fully separated passenger traffic from freight, which typically had not been the case in earlier structures.

The trends begun in these 1876 stations became fully articulated in the three main depots built by the railways in Center City in the 1880s and 1890s. Broad Street Station, the Baltimore & Ohio facility at Twenty-Fourth and Chestnut streets, and Reading Terminal were exclusively passenger structures with complex, well-defined interiors offering a multitude of services. All three had large train sheds protecting passengers from weather while they boarded the trains. These train sheds, soaring structures made of glass and steel, were physical manifestations of Americans’ love of technology and reflected trends in Victorian architecture and engineering that also characterized the era’s world’s fairs and new department stores. 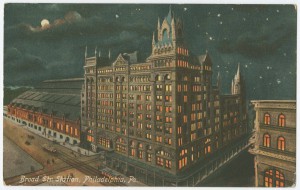 The first of the grand Victorian stations, Broad Street Station was built by the Pennsylvania Railroad in 1881 and expanded in 1891-92. Train service ended in 1952, and it was demolished the next year. (Library Company of Philadelphia)

The first of these grand stations to open, in 1881, was the Pennsylvania Railroad’s Broad Street Station, which was qualitatively different from any previous depot in Philadelphia. Its façade, in the style and scale of a great London Victorian railway terminus, was unlike that of any existing railroad structure in the city. Closely resembling the recently completed St. Pancras station in London, the initial structure’s Gothic design by the Philadelphia firm of Wilson Brothers looked more like a massive church than a train station. Located directly across the street from Philadelphia’s still under-construction City Hall, it was a fitting temple to both the power of Philadelphia’s most influential corporation—the Pennsylvania Railroad—and the pretensions of the growing metropolis. In 1892, when the station needed to be enlarged because of the continuing expansion of the Pennsylvania Railroad and growing commuter traffic, Philadelphia architect Frank Furness (1838-1912) designed a significant addition in his eclectic modern style. The station also gained a new train shed, the largest single-span train shed in the world at the time. 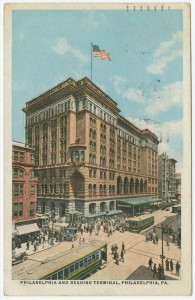 Reading Terminal was constructed in 1893 by the Philadelphia & Reading Railroad. It served passengers until 1984 and was integrated into the Pennsylvania Convention Center in 1993. (Library Company of Philadelphia)

The final grand depot to serve Philadelphia was Pennsylvania (30th Street) Station, opened in 1933 by the Pennsylvania Railroad in West Philadelphia. Designed by Alfred Shaw (1895-1970) of the Chicago firm Graham, Anderson, Probst and White in a transitional neoclassical, art deco style, it was one of the last major railway passenger stations constructed in the United States. (Cincinnati Union Terminal opened in the same year, and only Los Angeles Union Passenger Terminal, opened in 1939, is on the same scale and later).

Pennsylvania Station formed part of a complex that also included a new main post office for the city and a distribution center for the Railway Express Agency. It was built as part of a Pennsylvania Railroad scheme known as the “Philadelphia Improvements,” a series of projects to improve efficiency by enabling passenger trains to easily operate throughout Philadelphia without having to stop and reverse in Center City. The projects also included Suburban Station near Sixteenth and Market Streets, so that Broad Street Station might be abandoned and its site and approaches redeveloped as commercial offices. The Great Depression and World War II delayed the full implementation of this plan until 1953. 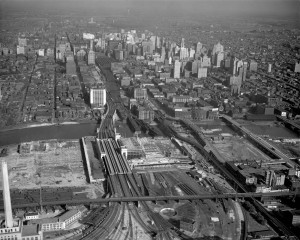 Because of competition between the Pennsylvania Railroad and the allied Reading/Baltimore & Ohio system in the late nineteenth and early twentieth centuries, secondary urban centers of the region all had multiple train stations that were smaller versions of Philadelphia’s grand depots. This pattern existed in Wilmington, Delaware; Camden and Trenton, New Jersey; and Chester and Reading, Pennsylvania, but its best example was in Atlantic City. In the first two decades of the twentieth century, three rail lines linked Camden and Philadelphia with Atlantic City, which had a variety of grand but small stations. After the competing companies merged into Pennsylvania-Reading Seashore Lines, a new station that looked like a small version of Philadelphia’s Pennsylvania Station opened in 1934.

The local or community stations in the Greater Philadelphia area can be classified in four ways. In the late nineteenth and early twentieth centuries, the most common type of station provided service for passengers, express, and mail. Even the electric local trains introduced in the early twentieth century on the Pennsylvania and the Reading had combination cars that provided for all these services. The express service permitted both national shippers and local merchants (such as department stores) to deliver goods throughout the region before highway delivery services became common. A second type of station, common through the middle of the twentieth century, also combined passenger, freight, express, and mail service, but in an integrated complex of buildings. Many an awkward early-twenty-first-century commuter parking lot is located where a small freight facility used to adjoin a passenger station. 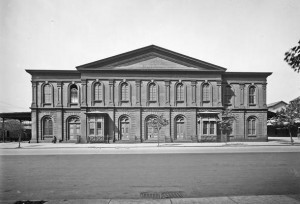 This freight-only facility was added to the existing Prime Street depot in 1876. It remained in use until the late twentieth century. (PhillyHistory.org)

Stations that served passengers only were uncommon until the middle of the twentieth century, but by the twentieth-first century they were the most common type operated by Amtrak, SEPTA, and NJ Transit. A small number of freight-only stations operated through the late twentieth century, often in industrial areas of the region. As transport of less-than-a-carload freight by rail declined because of truck competition, these facilities closed.

Architecturally, community stations were a varied lot. The railroads’ engineering departments built many of wood and by common designs, while architects designed some, especially those serving wealthy suburbs. Philadelphia’s Frank Furness not only designed central stations in Philadelphia and Wilmington for the Pennsylvania and the Baltimore & Ohio but also more than one hundred smaller stations for the Reading, many in Greater Philadelphia.

In the early twenty-first century, railroad stations continued to change. Some were rebuilt for further passenger use, others became stores, residences, and offices, and still others have been preserved for their architectural distinctiveness and their connection to an age when railroads and their stations were the primary mode of transportation in Greater Philadelphia. A total of thirty of stations in Greater Philadelphia–ranging from small community depots to Pennsylvania (Thirtieth Street) Station and Reading Terminal–have been placed on the National Register of Historic Places for their architectural significance.