We are pleased to share the news of a new book by Silas Chamberlin, author of the essay about recreational trails in The Encyclopedia of Greater Philadelphia.  His book, On the Trail: A History of American Hiking, is a history of American hikers and their role in creating the nation’s trail system.  According to Yale University Press: 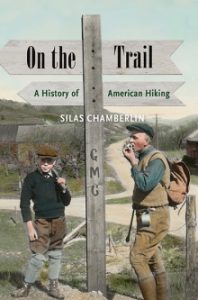 In the mid-nineteenth century urban walking clubs emerged in the United States. A little more than a century later, tens of millions of Americans were hiking on trails blazed in every region of the country. This groundbreaking book is the first full account of the unique history of the American hiking community and its rich, nationwide culture.

Delving into unexplored archives, including those of the Appalachian Mountain Club, Sierra Club, Green Mountain Club, and many others, Silas Chamberlin recounts the activities of hikers who over many decades formed clubs, built trails, and advocated for environmental protection. He also discusses the shifting attitudes of the late 1960s and early 1970s when ideas about traditional volunteerism shifted and new hikers came to see trail blazing and maintenance as government responsibilities. Chamberlin explores the implications for hiking groups, future club leaders, and the millions of others who find happiness, inspiration, and better health on America’s trails.

Chamberlin will discuss and sign his book at the Penn Book Center, 130 S. Thirty-Fourth Street, Philadelphia, on Thursday, December 8, at 6:30 p.m.  For more information, link here.