Center City’s many department stores were a regional destination for shoppers in the first half of the twentieth century.  However, in the years after World War II shoppers increasingly bypassed Center City in favor of new suburban shopping malls. In an effort to reverse this trend, early studies sponsored by the Philadelphia Redevelopment Authority proposed a massive project that combined street and subway-level retail with office towers, parking, ramps to the Vine Street Expressway, and public transportation connections including a rail tunnel, intercity bus terminal, and an above-ground busway.

High costs eventually made it necessary for the Redevelopment Authority to scale down the project. The first stage, Gallery I, opened by the nationally recognized mall developer the Rouse Company, in 1977, connected the existing Strawbridge & Clothier department store and a relocated Gimbel’s department store with four levels of smaller retailers in a suburban mall-style environment.  Rouse brought a high level of management experience to the project, which helped to overcome some of the stigmas attached to downtown developments.  For example, in comparison to its suburban malls, the Rouse Company deployed a larger security force at the Gallery to ensure that customers felt safe in the new urban space. After Gallery I’s successful opening, city leaders pushed forward with the second phase, Gallery II, which added an additional department store, J.C. Penney, along with another four-level block of retail.  The city also began construction on the Center City Commuter Rail Tunnel, which included a station attached to Gallery II.

The Gallery faced its share of difficulties: The tracks leading to the commuter rail tunnel were shut down for repairs in 1984 and 1992-1993, civil rights leaders used it as a stage for protests in the early 1980s, and the difficult retail market caused the closure of many stores due to consolidations in the 1990s.  Anchor stores changed as department stores merged, closed, or moved, with spaces filled at various times by discount retailers like Stern’s, Clover, K-Mart, and Burlington Coat Factory. Detractors contended that the Gallery was a lifeless hulk and negatively affected retail in the surrounding neighborhood. 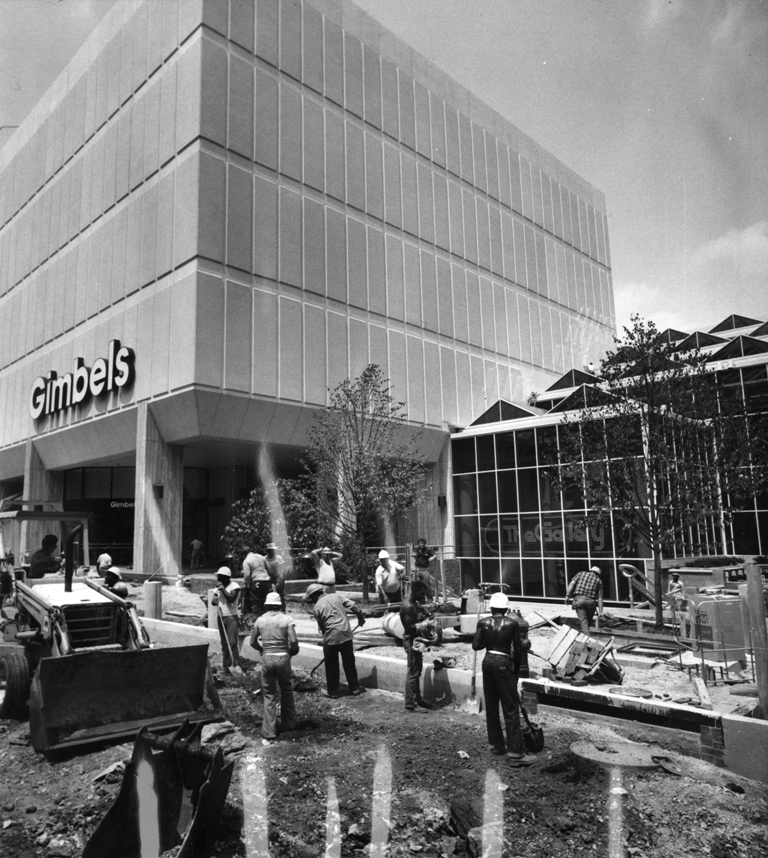 James Rouse, a well-regarded shopping-center designer, was hired by the Philadelphia Industrial Development Corporation and Philadelphia's Urban Redevelopment Authority to design the Market East Shopping Center (also known as the Gallery) in the 1970s. The Gallery was part of PIDC's larger efforts to attract shoppers back into the heart of Philadelphia by creating a shopping experience that rivaled shopping at suburban malls. Opened in 1977 and expanded in 1984, the Gallery has four floors of climate-controlled shopping and office space. In this view from 1977 when construction was still in progress, Gimbels department store is visible at the corner of Ninth and Market Streets. Over time, the anchor retailers have changed, and Gimbels was succeeded by Stern’s, then Clover, then Kmart, which closed in 2014 after a decade in that location.

In addition to providing commercial space for businesses, the Gallery acts as a transportation hub for the SEPTA and PATCO subway systems, and provides workspace for other Philadelphia business and agencies. 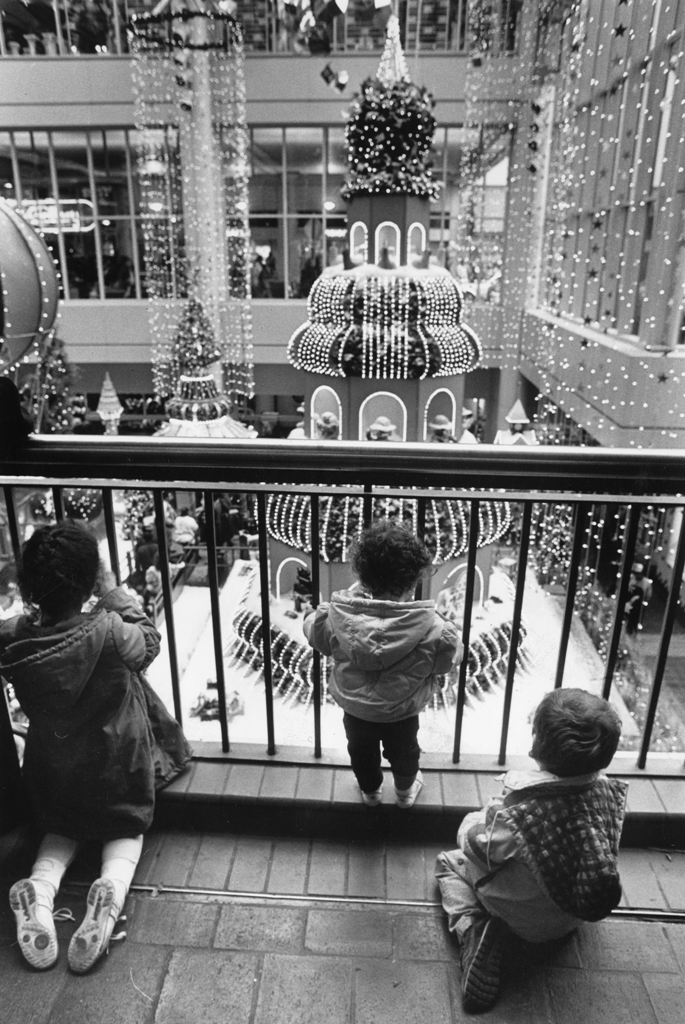 Like other shopping malls, the Gallery provides a range of events and seasonal scenes to entertain shoppers and bring additional people into the mall. Publicity events with entertainers or theater promotions last for a limited time, but holiday-related motifs such as Easter or Christmas displays provide shoppers with seasonal atmosphere. During the holiday shopping season in December 1990, these children peered through the railing to view the "winter wonderland" assembled in the courtyard below. 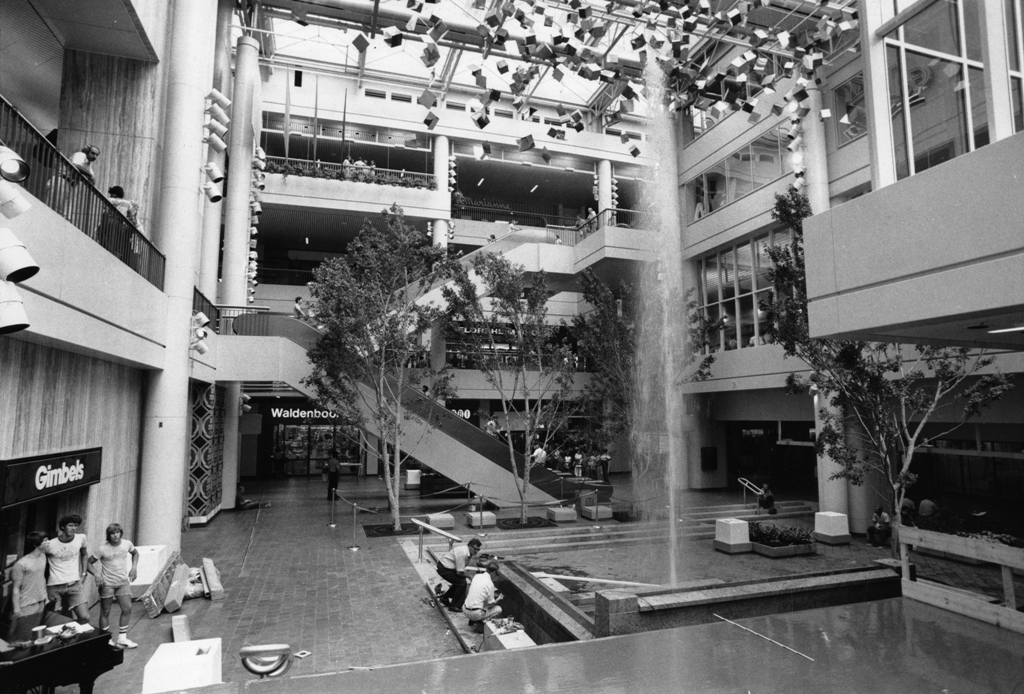 View of the Gallery I Courtyard

The Rouse Company incorporated elements of suburban shopping malls, such as expansive open spaces and modern-art displays, into the Gallery's urban city environment. Since the primary floor of the Gallery was underground, skylights were employed in the main courtyards on each side of the mall, bringing natural light to the lower floors and reinforcing the open design. This picture of the courtyard at Market and Ninth Streets in 1977 shows an art display of metallic cubes hanging from the ceiling, while the open space on the floor contains small trees, and a water fountain. The scene was much the same in 2014, except the water fountain had been eliminated. 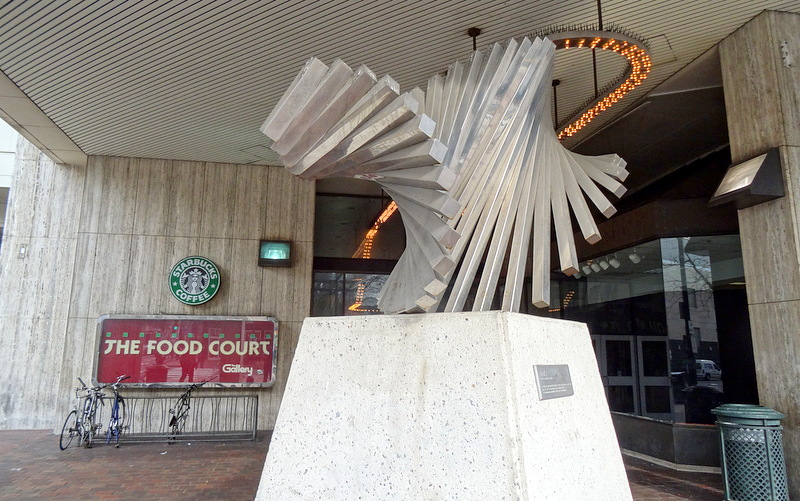 Art in the Gallery

From the initial development plans of in the 1960s, artworks were a key aspect of making the Gallery feel like a suburban shopping center in an urban environment. Modern sculptures and artistic presentations are located throughout the interior and exterior of the complex. The first floor of the Gallery II section of the mall (between Eleventh and Tenth Streets) has a three-story tall artistic assembly that features notable artists, performers, places, and events from Philadelphia history. Outside the Gallery's main entrance at Ninth and Market Streets, a twenty-foot-tall sculpture titled Burst of Joy by Harold Kimmelman towers. The sculpture in this image is called Amity, by David Lee Brown, and is located in front of the Food Court entrance of the Gallery at Tenth and Market Streets. (Photograph by Donald D. Groff for the Encyclopedia of Greater Philadelphia.) 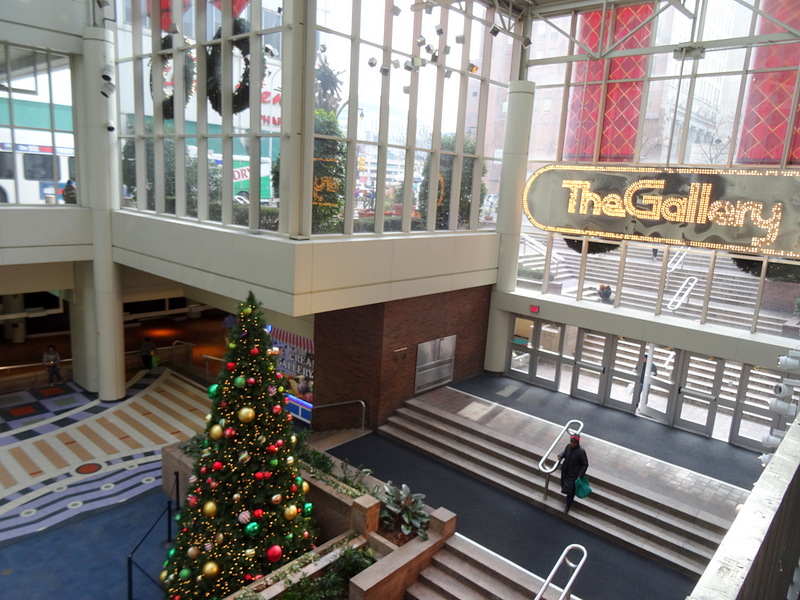 As part of the Gallery's design to link shopping with Philadelphia's subway transportation network, the first floor of the Gallery is below street level. This 2014 view of the main courtyard of "Gallery I," located at Market and Ninth Streets, shows the steps (behind the Gallery sign) leading from the outside sidewalk down to the glass entrance of the mall. As the Gallery expanded in 1984 and struggled to find business tenants in the 1990s and beyond, the top floor of the Gallery was modified into office space. Retail businesses on the higher levels moved down in hopes of gaining more foot traffic for the thousands of people who use the Gallery as a transportation hub daily. (Photograph by Donald D. Groff for the Encyclopedia of Greater Philadelphia.) 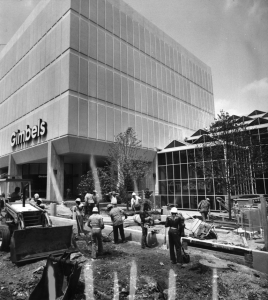 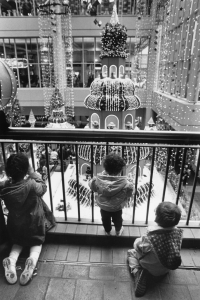 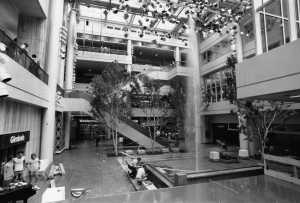 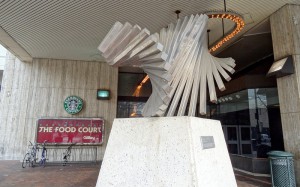 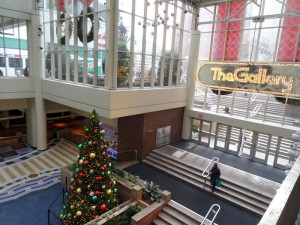