Fearing escalating prices for downtown real estate and competition from suburban commercial centers, Philadelphia’s department stores gradually embraced the decentralized retailing formula unfolding around the metropolitan area in the 1920s. In 1929, Strawbridge and Clothier focused its retail strategy on established and emerging upscale suburban communities, building two branch stores in planned suburban shopping facilities, with one opening on the Main Line in 1930 and the other in Jenkintown in 1931.  It thus became the first of the “Big Five” Philadelphia department stores to join the planned shopping center endeavor.

Although the Great Depression presented investment and financial hurdles to further suburban retail expansion, both Philadelphia department store owners and suburban developers laid plans for expansion outward during the downturn. Real estate developer John McClatchy, for instance, approached Lits’ executives to open a branch store at Sixty-Ninth Street in the late 1930s, but delayed the project until 1947 because of lingering financial fears stemming from the Depression.  As the war drew to its conclusion, other “Big Six” stores, namely Gimbels and Wanamaker’s, entertained the possibility of building branch stores in anticipation of further shopping center development in the suburbs.

Aside from strip mall development, prominent commercial developers designed and erected enclosed shopping malls, which served as regional commercial hubs.  In the mid-to-late 1950s and early 1960s, the aesthetic of shopping centers underwent a dramatic change, as mall architects and developers envisioned consumption spaces intended to mitigate the negative implications associated with suburban sprawl. They constructed enclosed malls, which incorporated garden courts, fountains, and air-conditioning to enhance the social and aesthetic features of mass consumption.  Opened in 1956, Southdale Center, located in Edina, Minnesota, served as the archetype for enclosed malls around the nation, especially the Cherry Hill Mall.

Victor Gruen, the esteemed shopping center architect who conceived Southdale, was hired to plan what would become the Cherry Hill Mall, which opened in 1961, in Delaware Township, New Jersey.  He sought to recreate a town square atmosphere, which would promote social order in an age of sprawling suburban development. Embracing Gruen’s design, the mall’s developer, James Rouse, collaborated with Strawbridge and Clothier president G. Stockton Strawbridge to forge an idyllic shopping complex for middle-class consumers.

Civic-oriented events also legitimized the communal stature of newly erected shopping complexes, as they employed marketing tactics, constructed large parking lots, and excluded “unsavory” social constituencies – namely racial minorities, vagrants, and the impoverished – to entice potential shoppers. In 1955 Gimbels executives, for instance, celebrated the opening of their branch store in the Cheltenham Square Mall by calling upon Montgomery County civic and business leaders to attend their facility’s opening ceremonies in an effort to equate civic participation with commercial progress.

By the 1970s and 1980s, the commercial landscape of metropolitan Philadelphia had undergone a radical transformation.  The development of major regional shopping centers, such as Cherry Hill and King of Prussia – which would become an enclosed shopping facility over multiple development phases during the 1970s and early 1980s – in the 1960s, spurred further commercial real estate expansion in Plymouth Meeting, Pennsylvania, and Deptford and Moorestown, New Jersey, during the 1970s.

Although suburban shopping centers continued to flourish, James Rouse, the well-regarded shopping center developer, collaborated with Philadelphia’s Urban Redevelopment Authority to resuscitate Market Street’s long-suffering central business district during the 1970s. Under his direction, he designed the Gallery at Market East, which marked a critical turning point in downtown Philadelphia’s commercial fortunes. Upon its opening in 1977, it became the first regional shopping facility constructed in a major American downtown after World War II, reviving the city’s commercial stature and serving as a major regional shopping destination.

In the 1990s, however, shopping centers in the Philadelphia region and around the nation confronted new commercial rivals, making economic and spatial modifications to remain competitive. As discount retail chains, specialty shops, and “Big Box” stores appeared in near proximity to traditional shopping centers, established shopping centers responded by undergoing structural upgrades.  Cherry Hill Mall officials, for instance, installed “retail neighborhoods,” which catered to specific social lifestyles and economic niches, and a social services’ station, which addressed family-related concerns and medical emergencies. The Willingboro Plaza in New Jersey, which had been mired in perpetual economic decline since the 1970s, also became a target for redevelopment in the late 1980s. Developers reconfigured the Plaza’s physical dimensions to create a refurbished “town center,” which included a public library, townhouses, and community college classrooms. In making such adjustments, Philadelphia’s shopping centers adapted to the evolving commercial model unfolding around them, redefining their commercial spaces to ensure continued social and economic relevance in the twenty-first century.

Matthew Smalarz is a  Ph.D candidate at the University of Rochester who teaches history at Manor College.  His dissertation examines middle-class whiteness and public space in Northeast Philadelphia following World War II. (Author information current at time of publication.) 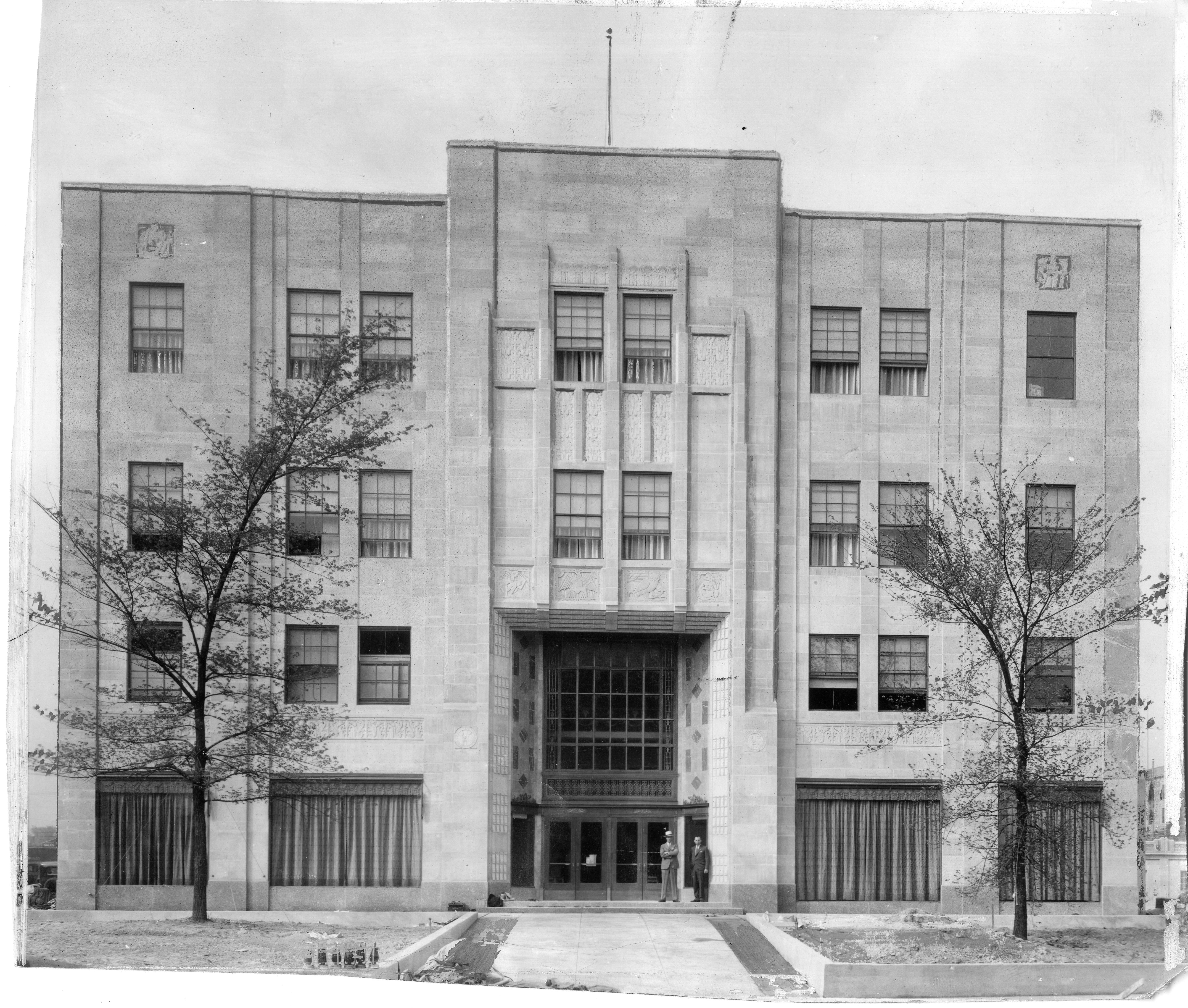 Pictured here soon after opening in 1930, the Strawbridge and Clothier store in Ardmore was built across from the Ardmore Station of the Pennsylvania Railroad and was part of a shopping center later called Suburban Square. In the late 1920s, Strawbridge and Clothier showed interest in establishing branches of the central Philadelphia store in growing upscale suburban communities, and this store in Ardmore was one of the first efforts. 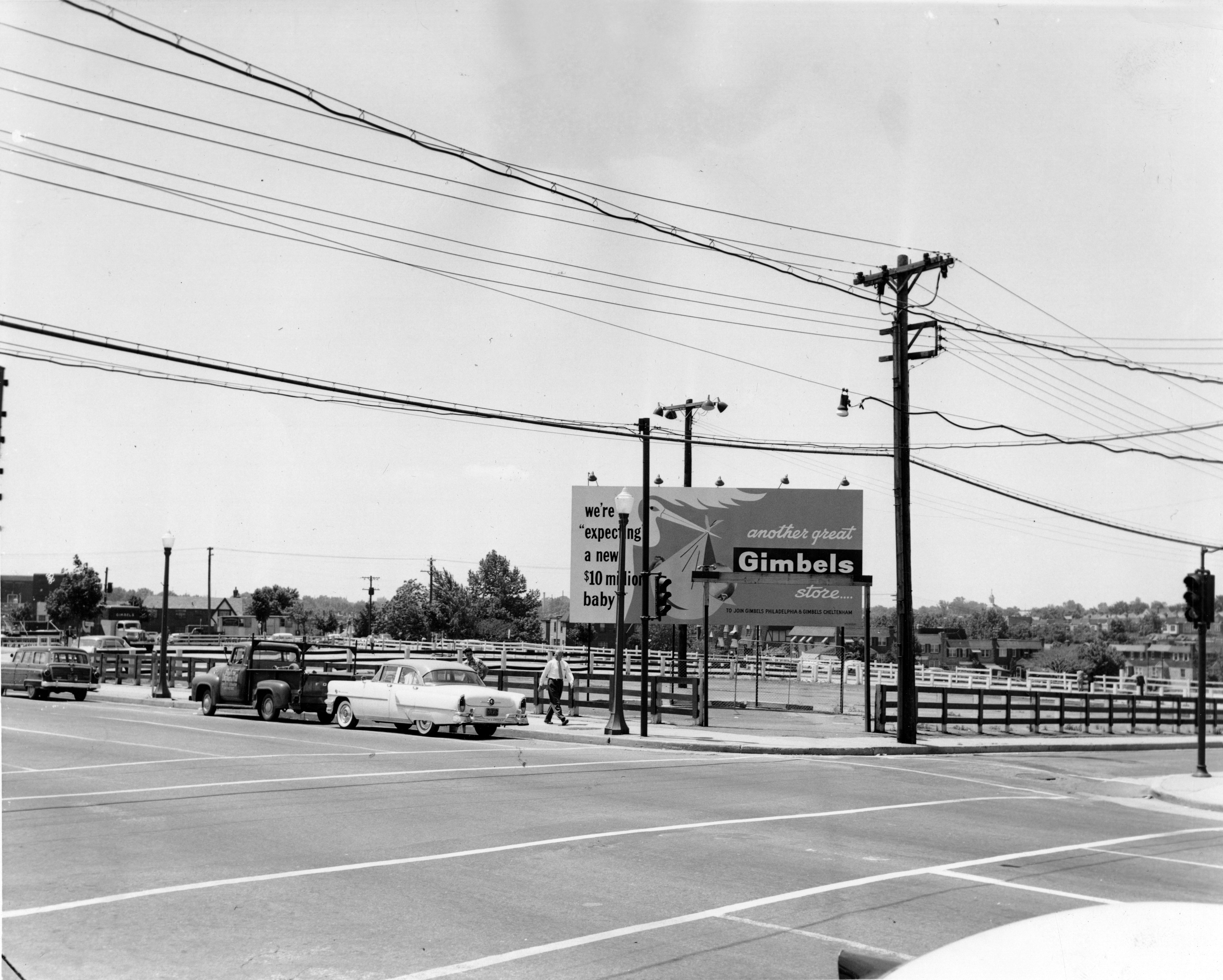 With the growth of the suburban residential environment after World War II, businesses like Gimbels focused on ways to develop branches outside of the center of Philadelphia. In 1956, Gimbels announced the construction of a large department store at the pictured intersection of Sixty-Ninth and Walnut Streets. The "$10 Million Baby" (as Gimbels is referenced on the billboard) was designed to be automobile-friendly and attract a variety of middle-class customers who did not want to travel into Philadelphia's central business district. Construction at this location took over a year, and the building was not was not finished until 1958. When the Gimbles in Upper Darby opened, the multi-level department store was complemented by a multi-level parking garage and an additional parking lot behind the building to cater to the expected automobile traffic. 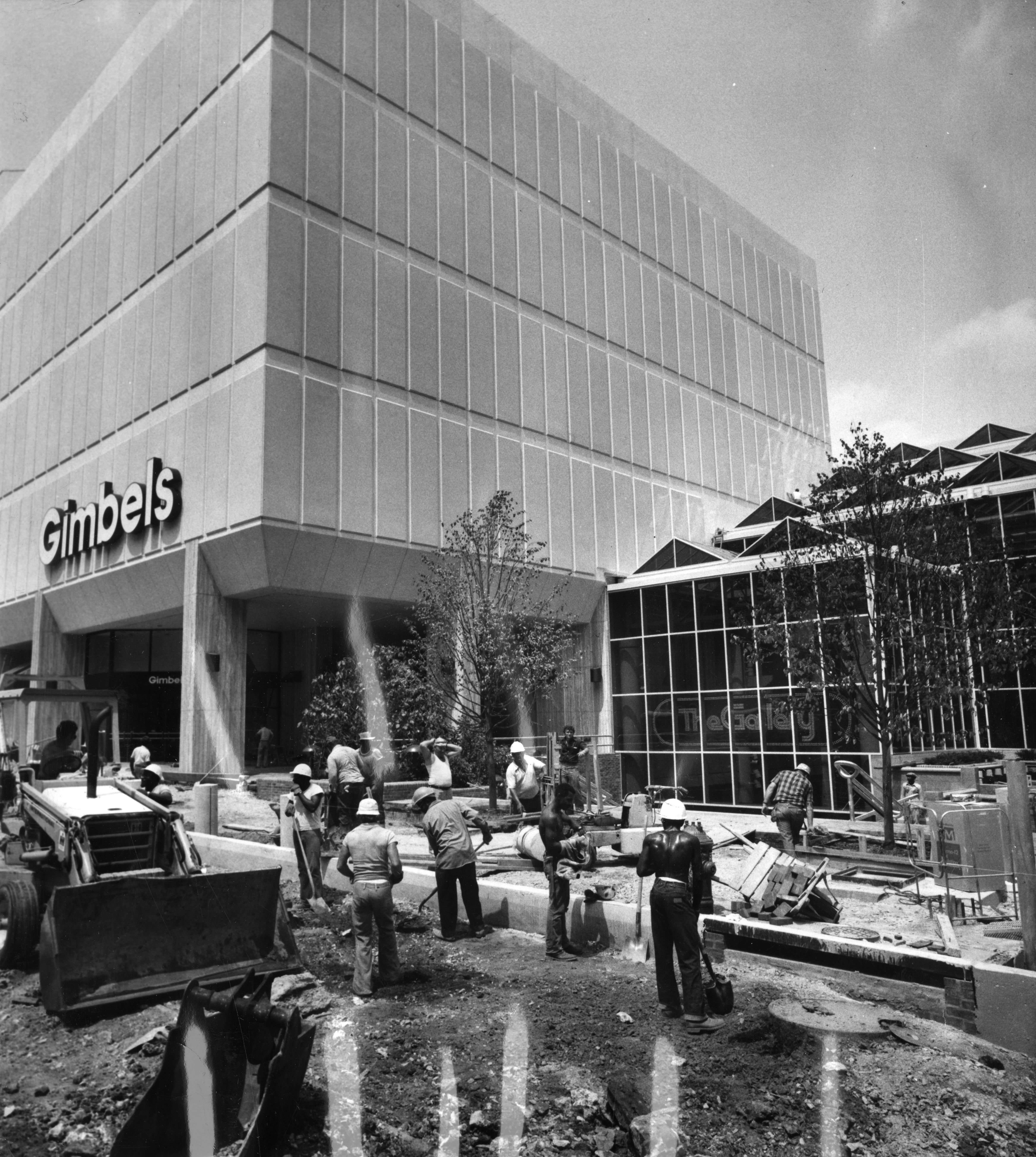 James Rouse, the well-regarded shopping center developer, was hired by Philadelphia's Urban Redevelopment Authority to design the Gallery at Market East in the 1970s. Working against the regional pattern of opening shopping centers in the suburbs, the Gallery was designed to attract people back into the heart of Philadelphia. The Gallery has four floors that are primarily accessible by an interior shopping environment, like a suburban shopping mall. Anchor stores also have their own entrances at street level. The Gallery also serves as a transportation hub for the SEPTA and PATCO subway systems. The view pictured here is from the corner of Tenth and Market Streets while the exterior was still under construction in 1977. 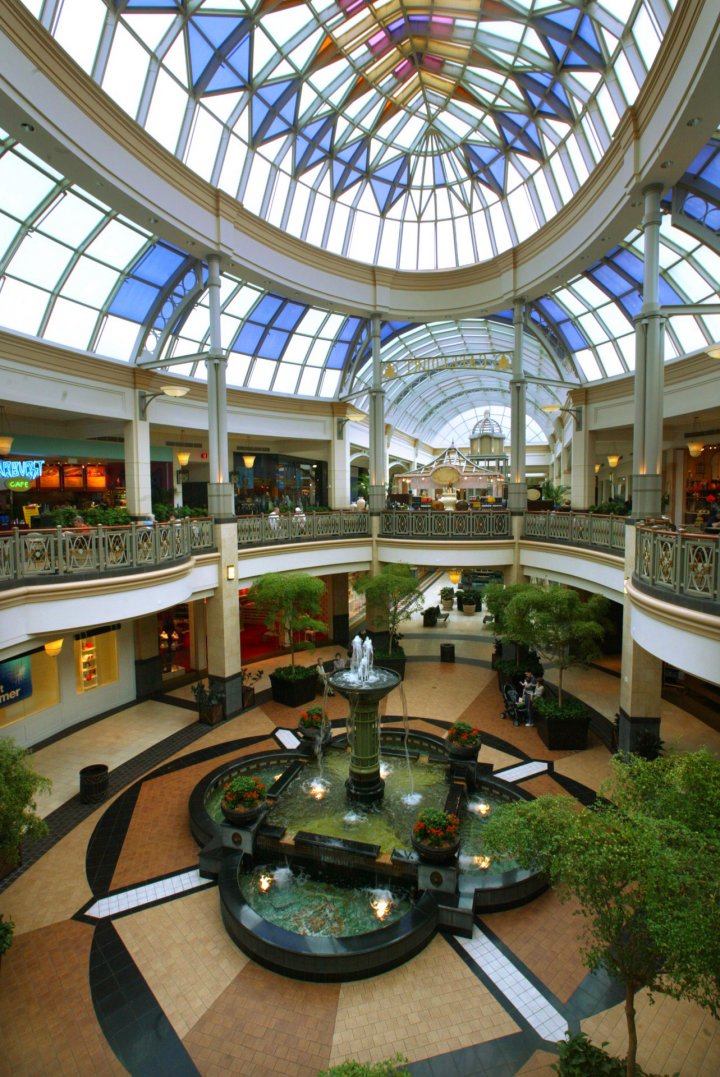 The Plaza at King of Prussia has changed drastically since first opening in 1963, to cater to customers' changing expectations for shopping environments and services. The Kravitz Company originally established the Plaza at King of Prussia as a large open-air mall, with numerous department stores, restaurants, and specialty shops totaling more than a million square feet of space. Shoppers who visited King of Prussia Plaza in the 1960s walked along large exterior sidewalks that were exposed to the natural weather. The Kravitz Company completed a series of renovations throughout the 1970s and 1980s to enclose and increase the size of the Plaza. A second enclosed shopping area called the Court opened adjacent to the Plaza in 1981.

The central fountain of the Plaza, pictured here in 2012, demonstrates how modern malls have incorporated open spaces, natural lighting, and other "nature" elements (like plants and water) into the shopping experience, while still offering a temperature controlled environment and protection from exterior weather elements. 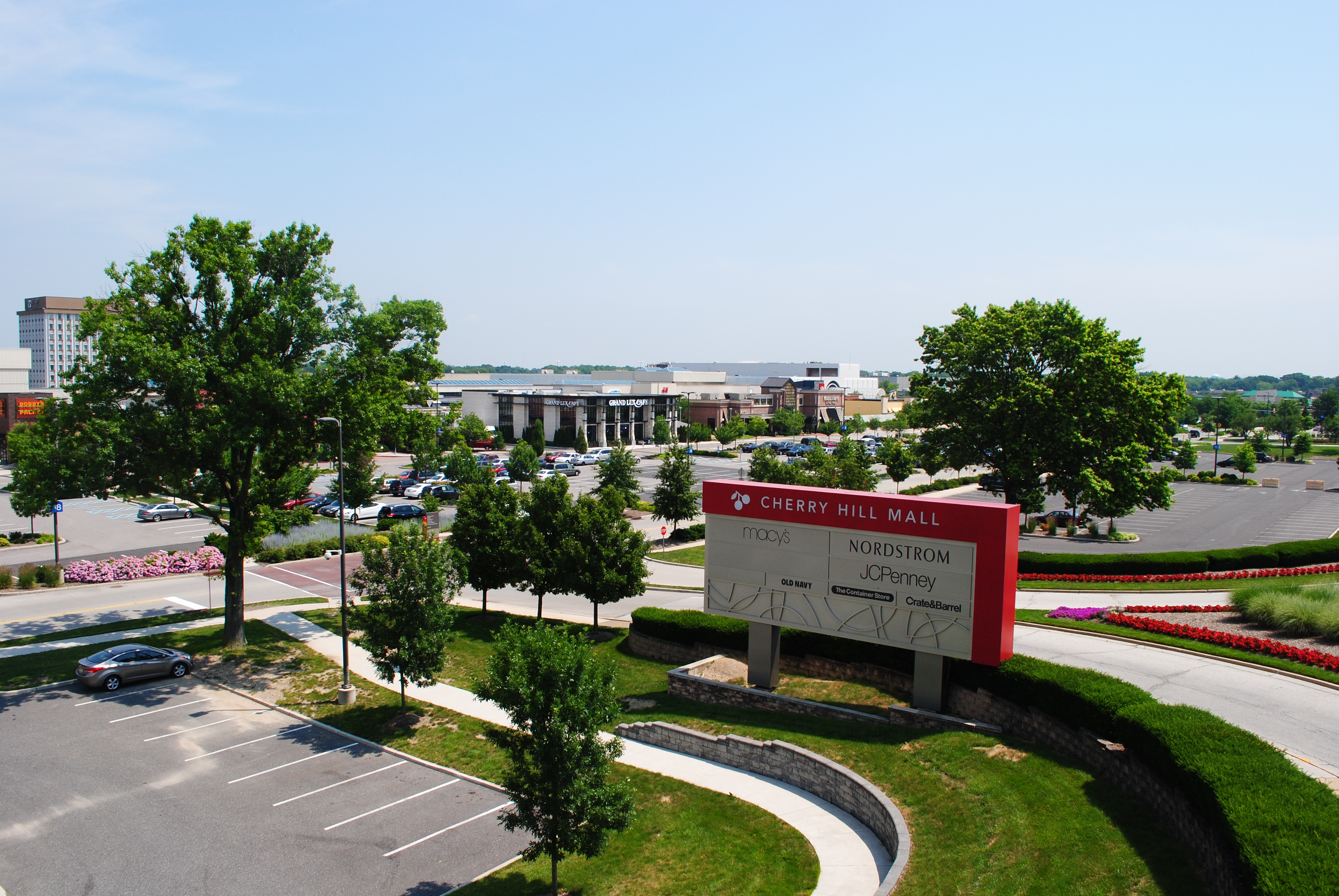 Victor Gruen designed the Cherry Hill Mall to replicate a town square atmosphere within an enclosed shopping center. Shopping center developer James Rouse collaborated with Strawbridge and Clothier president G. Stockton Strawbridge to turn Gruen's design into the first enclosed shopping center in New Jersey. The Cherry Hill Mall opened in 1961 with the first Strawbridge location in New Jersey and specialty shops to attract customers, but the mall also attracted people through its decor and programming. The mall featured an island paradise, replete with tropical plants, birds, and fountains; hosted community oriented-events, such as boat shows and art exhibits; and promoted civic and community-based functions with the construction of its community hall and a 400-seat auditorium. 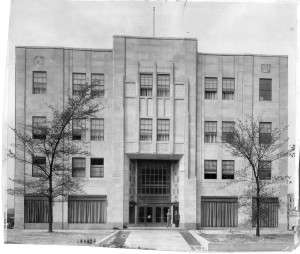 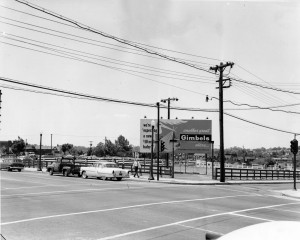 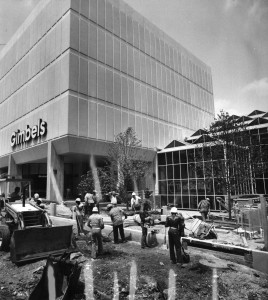 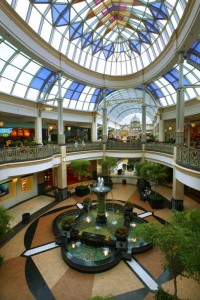 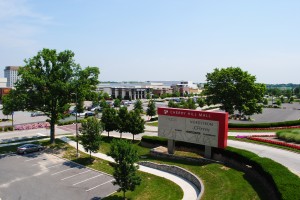 Crawford, Margaret.  “The World in a Shopping Mall” in Variations on a Theme Park: The New American City and the End of Public Space, ed. Michael Sorkin.  New York: Hill and Wang, 1992.

Dyer, Stephanie.  “Markets in the Meadows: Department Stores and Shopping Centers in the Decentralization of Philadelphia, 1920-1980 (Ph. D., diss., University of Pennsylvania, 2000)