Over the nineteenth and twentieth centuries, Americans started establishing historical societies to collect and preserve historical materials. In 1815, Philadelphia became the fourth U.S. city to host a historical society, the American Philosophical Society’s Historical and Literary Committee. The city’s religious tolerance and central location made it a natural location for religious and ethnic societies. Interests in preserving the history of local places and peoples led to the creation of county, city, and neighborhood historical societies. Leading citizens used history to affirm the area’s contributions to the formation and development of the United States.

Two early historical initiatives foreshadowed the city’s subsequent history of secular and religious societies. In 1791, pioneering historical editor Ebenezer Hazard (1744–1817) of Philadelphia received a letter from Boston, where citizens had just founded the first historical society in the nation, asking about Philadelphians following suit. Hazard replied such an enterprise would likely be considered the province of the American Philosophical Society. Members of the society came to the same conclusion, albeit a quarter-century later, and established a committee to investigate the history of the United States in general and Pennsylvania in particular. Roughly contemporaneous with this action, Protestant Philadelphians established a Religious Historical Society dedicated to Christian history. The list of founders and early officers included ministers from several denominations: Dutch Reformed Jacob Brodhead (1782–1855), Baptist William Staughton (1770–1829), and Presbyterians Samuel Brown Wylie (1773–1852) and Jacob Janeway (1774–1858). Both societies were moribund by the early 1820s.

Elite members of society formed state societies in the early and mid-nineteenth century to preserve the histories they valued. Amid the celebrations leading up to the fiftieth anniversary of the Declaration of Independence, Philadelphians William Rawle (1759–1856), Benjamin H. Coates (1797–1881), and others established the Historical Society of Pennsylvania in 1824, likely due to the encouragement of collector and chronicler John Fanning Watson (1779–1860). Citizens in New Jersey founded a state society in 1845, while Delawareans waited until 1864. Nineteenth-century historical societies primarily drew their membership from the ranks of professional men of European descent. Women participated, first behind the scenes and later in their own right, but class and ethnic biases persisted. The societies relied on their membership for volunteer action and operating funds as they gathered collections of historical materials, lobbied governments for support and preservative action, and prepared historical publications.

Philadelphia hosted a flowering of religious historical societies founded to preserve denominational histories. In the mid-nineteenth century, Presbyterians and Baptists created societies (Presbyterian Historical Society, 1852, and American Baptist Historical Society, 1853) and located their collections in Philadelphia. Philadelphia’s central location and religious tolerance made it an apt choice, and several denominations followed in the steps of the Presbyterians and Baptists, including the German Reformed (later Evangelical) Church (1863), Society of Friends (1873), and Catholics (1880). The Baptist historical society’s collections were destroyed in a fire at the Publication House in Philadelphia in 1896; members rebuilt the collections, but in the mid-twentieth century the society relocated to Rochester, New York, and united with the Colgate Rochester Divinity School’s extensive historical collection.

Most historical societies focused on documenting and preserving place-based local, secular identities—particularly in areas where residents felt overlooked by existing societies. In 1834, responding to the older Historical Society of Pennsylvania’s tendency to focus on Philadelphia, Pittsburghers formed the Historical Society of Western Pennsylvania. Although it proved unstable (reorganized in 1843, failed, then reestablished in 1858), it set a pattern for waves of historical society creation over the following centuries. By the end of the nineteenth century, Bucks (1880), Montgomery (1881), Chester (1893), and Delaware (1895) Counties in Pennsylvania and Salem (1884) and Camden (1899) Counties in New Jersey had established societies. Gloucester (1903), Cumberland (1905), and Burlington (1915) Counties, as well as New Castle County (1934) in Delaware followed suit.

Inspired by the historic preservation movement, residents of various cities, towns, and townships in the region also began to organize societies over the course of the twentieth century. In some cases, existing societies took on preservation responsibilities. The National Society of the Colonial Dames of America assumed care for the Logan family’s house, Stenton. In other instances, residents created new societies to preserve a particular building or site. For example, the Highlands Historical Society (1975) in Fort Washington, Pennsylvania, formed to save Anthony Morris’s Highlands Mansion. The societies’ goals generally expanded to include other preservation activities. The Sharon Hill Historical Society (1991) organized to preserve a train station, but went on to publish a book of photographs. This place-emphasis facilitated the proliferation of historical societies within the region. Philadelphians founded societies to preserve the histories of particular neighborhoods including Germantown, Bridesburg, Frankford, Northeast Philadelphia, and University City. Philadelphia was not alone in hosting multiple societies; Quakertown became home to the Quakertown Historical Society, Quakertown Train Station Historical Society, and Richland Historical Society.

In addition, other societies incorporated historical objectives into their missions over the course of the centuries. Although the American Philosophical Society’s historical committee failed, the parent society shifted to preserve its historical collections and support research. Other institutions, such as the Athenaeum and College of Physicians of Philadelphia, also recognized and acted to preserve their collections’ historical value.

By the early twenty-first century, the region witnessed the creation of even more societies, but encouragement from granting agencies, such as the Barra Foundation, led to consolidation and cooperation among existing societies. The Historical Society of Pennsylvania took on the manuscript collections of the Balch Institute for Ethnic Studies (2002) and the Genealogical Society of Pennsylvania (2006). The Germantown Historical Society merged in 2012 with Historic Germantown, an association of historic houses and museums, to form Historic Germantown: Freedom’s Backyard. Historical societies, individually and in collaboration, supported researchers, developed public programs, advocated for preservation, and more.

Over the course of two centuries, Philadelphians established scores of societies to preserve the history of local places and people. In the process, they laid the groundwork for the region’s extensive historical collections and buildings.

Alea Henle is head of public services librarian at Western New Mexico University. Her research interests explore how efforts to preserve materials for history have shaped what survived. (Author information current at time of publication.) 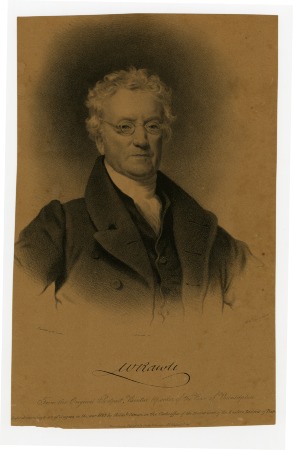 One of the founders of the Historical Society of Pennsylvania was the prominent lawyer William Rawle. Rawle also was involved in the Library Company of Philadelphia, serving as secretary, and was a member of the American Philosophical Society. In 1805, he was one of the founders of the Pennsylvania Academy of the Fine Arts, the first art museum and school in the United States. Rawle founded the Historical Society of Pennsylvania in 1824 with physician Benjamin H. Coates and others. He was the society’s first president. 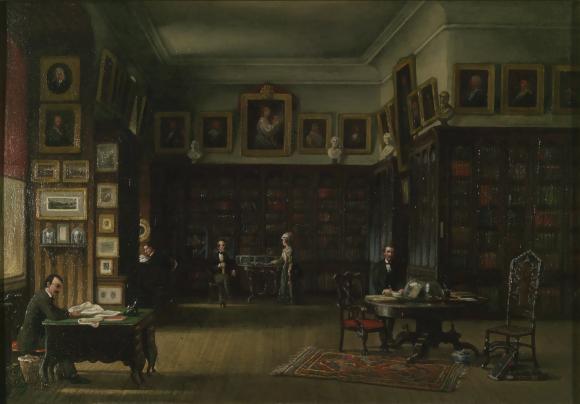 Prior to moving to its current location at Thirteenth and Locust Streets, the Historical Society of Pennsylvania went through a number of headquarters. After being founded in the home of Thomas Wharton in 1824, the Society shared locations with some of Philadelphia’s most prestigious organizations. For a brief period in the 1820s, the society operated out of Carpenters’ Hall, home of the Carpenters’ Company of Philadelphia and the site of the First Continental Congress. From 1825 until 1844, the society’s collections were housed in Philosophical Hall, built in 1789 for the American Philosophical Society, then moved to the Athenaeum of Philadelphia’s newly constructed headquarters until 1872. The Pennsylvania Hospital then offered The Picture House, shown here during its tenure as the society’s library. The Picture House was built to house Benjamin West’s painting Christ Healing the Sick in the Temple. The society remained at the Picture House for a decade.

Finally in 1882, members of the Historical Society raised funds to purchase the Patterson Mansion, built in the 1830s by William Strickland. Strickland built a number of the city’s monumental Greek Revival buildings, such as the Merchants’ Exchange and the Second Bank of the United States. This influence, while subdued, can still be seen in the Patterson mansion’s classically inspired portico. The mansion was expanded in the early twentieth century to include a fireproof hall for the most valuable collections. Major renovations and modernizations continued into the 1990s. Some of the Society’s earliest collections are housed in the Library Company of Philadelphia’s Ridgeway Library, located next door. 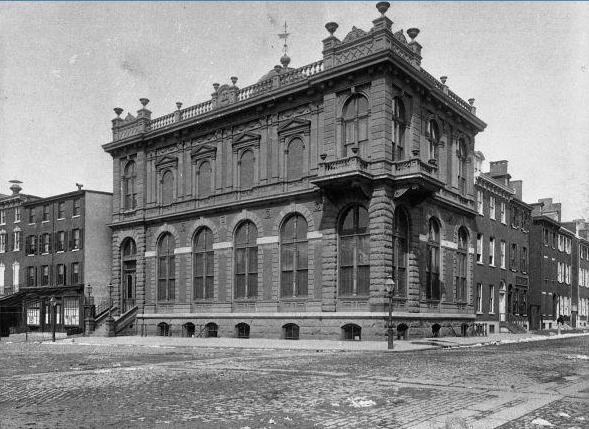 Charitable organizations in the region, like the German Society of Pennsylvania, also established archives. The German Society was founded in 1764 to assist newly-arrived German immigrants, particularly those in indentured servitude, by providing interpreters and legal aid among other services. During an influx of German immigration in the nineteenth century, the society grew in size and prestige. In 1867 it established its archives, which today house over 50,000 books and form one of the largest collections of German language books in the United States. Twenty years later, the society was able to fund construction of a new headquarters on Spring Garden Street, where the archives remain today. During the world wars, German cultural organizations came under suspicion, and membership went into a decline. The neighborhood surrounding the society’s headquarters also declined as deindustrialization and suburbanization dramatically altered city demographics. Only in recent decades have both the German Society of Pennsylvania and the neighborhood it inhabits seen a resurgence. 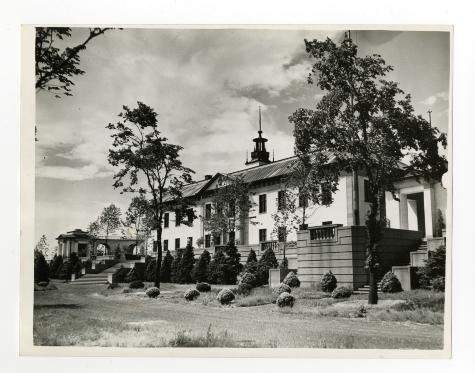 The earliest European settlers of the Philadelphia area were Swedes, who founded the colony of New Sweden on the banks of the Delaware River nearly fifty years before William Penn’s charter was issued. Their early influence on the city can still be seen in the Gloria Dei Church in the Southwark neighborhood, the oldest church in the state of Pennsylvania. Little was done to preserve the legacy of these Swedish colonists until the 1909 founding of the Swedish Colonial Society. Founding member Amandus Johnson wrote one of the most important scholarly works about New Sweden, a two-volume history The Swedish Settlements on the Delaware 1638-1664.

In 1926, to coincide with both the Sesquicentennial of the United States and the forthcoming tricentennial of New Sweden, he founded the American Swedish Historical Museum. It was formally dedicated in 1938. Located in what is now Roosevelt Park in South Philadelphia, the museum displays galleries devoted to New Sweden, but also to more recent contributions to American society by Swedes or Swedish-American artists, craftsmen, and scholars. The museum building was designed by a Swedish-American architect based on a number of Swedish landmarks including Stockholm City Hall and Ericsburg Castle. It is the oldest Swedish-American museum in the United States. 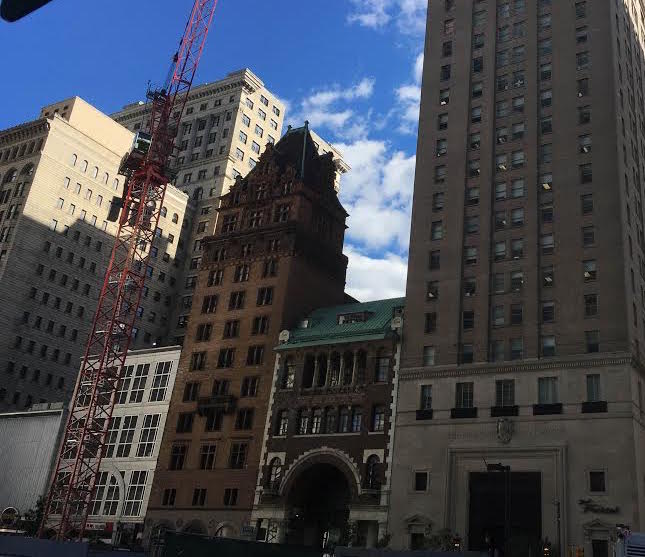 The American Baptist Historical Society was one of several religious historical societies established in Philadelphia in the nineteenth century. It was an offshoot of the church’s publication center, which was set up in 1824. The society’s ten-thousand-volume library was held in its three-story Publication House building on the 1400 block of Chestnut Street until 1896, when a fire broke out in the basement of the neighboring Haseltine building. The entire collection as well as historical artifacts were destroyed when the fire spread to the upper floors of the Haseltine building and into the Publication House.

The American Baptist Historical Society replaced its Publishing House with an ornate nine-story building in the French Renaissance Revival style. While the society’s collections, which included its original charter, could not be replaced, a community effort within the Baptist Church eventually helped build a new collection that exceeded the size of the old. In 1955, the society departed Philadelphia for Rochester, New York, where it remains. The rebuilt headquarters in Philadelphia, commonly known as the Crozer Building, was added to the National Register of Historic Places in 1980. (Photograph by Lucy Davis for The Encyclopedia of Greater Philadelphia) 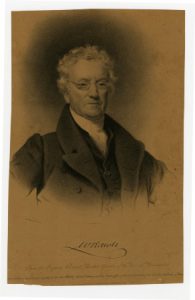 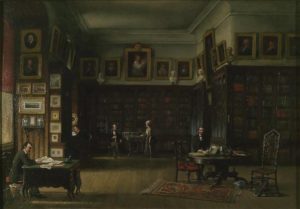 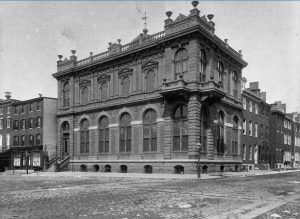 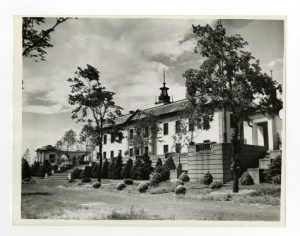 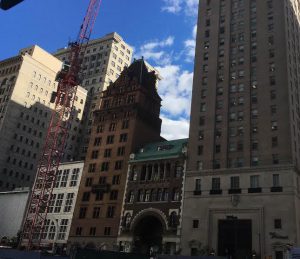