Interest in honoring King’s legacy grew after his 1968 assassination, and annual observances of his date of birth (January 15) began in Atlanta and elsewhere. Pennsylvania Governor Milton J. Shapp (1912-94) signed a state King Holiday into law in 1978, and New Jersey declared a state holiday the same year. Delaware Governor Pierre Samuel Du Pont (b.1935) designated a state holiday in 1984. Public pressure also persuaded Congress to pass federal King holiday legislation, which President Ronald Reagan (1911-2004) signed on November 2, 1983. Commemorating King’s birthday as a federal holiday beginning in 1986, the day was dedicated to reflecting on “racial equality and nonviolent social change.” Intended for all Americans, not only African Americans, King Day nonetheless fulfilled a long held desire for a national Black holiday.

Philadelphia’s role in the observance grew after the first holiday, which was criticized by civil rights activists as superficial and overly reliant on King’s “I Have a Dream” speech. Seeking to make the day more substantial, the King Federal Holiday Commission chaired by King’s widow Coretta Scott King (1927-2006) looked to Philadelphia for inspiration and used the bicentennial of the U.S. Constitution to invoke King’s legacy. The Liberty Bell, with its associations to independence and abolition, became a holiday icon; ringing the bell, and replicas in every state, became a tradition from 1987. Some who gently tapped the bell in Philadelphia included Rosa Parks (1988), Benjamin Hooks of the NAACP (1989), James Farmer of the Congress of Racial Equality (1990), Dorothy Height of the National Council of Negro Women (1992), Vice President Albert Gore (1995), and General Colin Powell (1996). King himself had laid a wreath at the bell in 1959 on National Freedom Day to commemorate the Thirteenth Amendment.

The 2015 King holiday in Philadelphia encompassed protest as well as commemoration. A large rally marching up Broad Street to City Hall and on to Independence Hall marked Martin Luther King Day as a “Day of Action, Resistance, and Empowerment” against economic inequality and police brutality. Following several high profile deaths of Black men in other cities at the hands of police, this protest attempted to reclaim King’s activism and pointed to a potentially contentious future for the holiday as a new generation of King legatees sought to protest as well as to serve.

Daniel Thomas Fleming is a Ph.D. candidate in the Department of History at the University of Newcastle, Australia. He is the author of “Remembering Martin Luther King Jr.” in Agora, Vol 46, No 1, 2011 and “Marvin Gaye, Martin Luther King and the FBI” in Traffic, Vol 9, 2007. He has presented his research at conferences of the Organization of American Historians and the Association for the Study of African American Life and History. (Author information current at time of publication.) 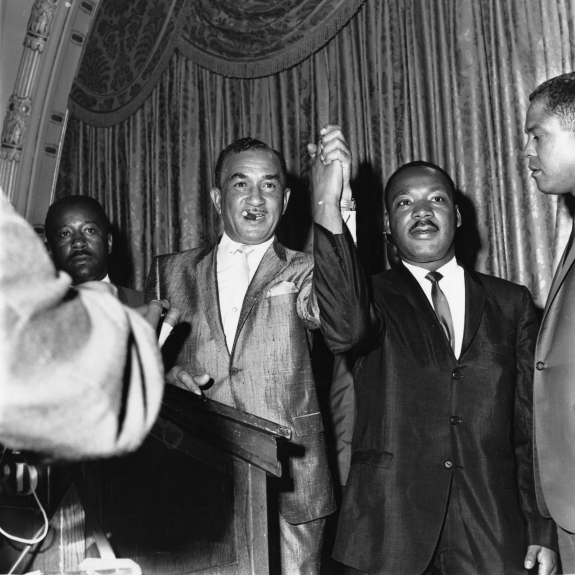 Cecil B. Moore and Martin Luther King in Philadelphia

Martin Luther King Jr. worked with Philadelphia civil rights leaders to promote equality and desegregation. In August 1965, King held a press conference with Philadelphia NAACP leader Cecil B. Moore (left). Moore, who led the desegregation protests at Girard College, was skeptical of King's nonviolent approach to civil rights and discouraged King from visiting Philadelphia. At this press conference, though, Moore spoke in support of King's commitment to the cause. King spoke to a crowd of 5,000 at a desegregation rally at Girard College the next day. The school is now a center for MLK Day activities in Philadelphia. 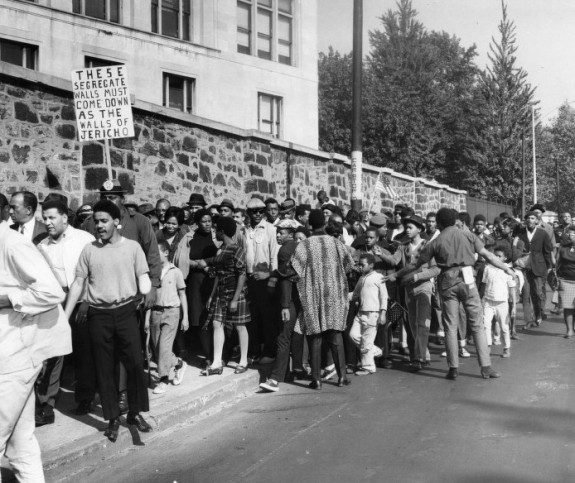 Girard College, founded in 1848 for poor, orphaned, or fatherless white boys, is a college preparatory boarding school located in the Fairmount neighborhood of Philadelphia. As a private school, Girard did not have to abide by the 1954 Supreme Court decision in Brown v. Board of Education that desegregated public schools. The school continued to refuse admission to African American students. Martin Luther King Jr. spoke at a civil rights rally outside Girard in 1965 urging integration of the school. This photo shows a crowd of protesters at that rally standing outside of the Girard College grounds. The first African American students were accepted three years later and now make up a majority of the student body. Girard College has become one of the centers for Martin Luther King Jr. Day of Service activities in Philadelphia, including hosting the Philadelphia Orchestra's tribute concert and MLK365 outreach programs. 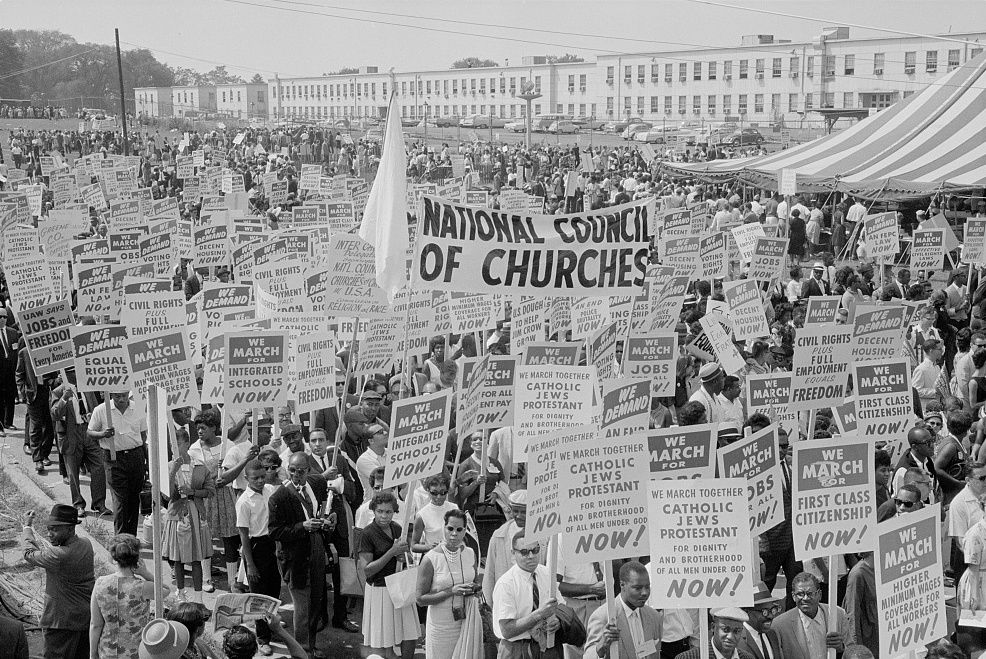 The March on Washington for Jobs and Freedom, 1963

Dr. Martin Luther King Jr. was known as one of the great orators of the twentieth century. He delivered his iconic “I Have a Dream” speech in front of the Lincoln Memorial during the March on Washington for Jobs and Freedom on August 28, 1963. King helped organize the march to push for passage of the Civil Rights Act. Over 200,000 men and women, including those in this photograph of a staging area, participated in the march. 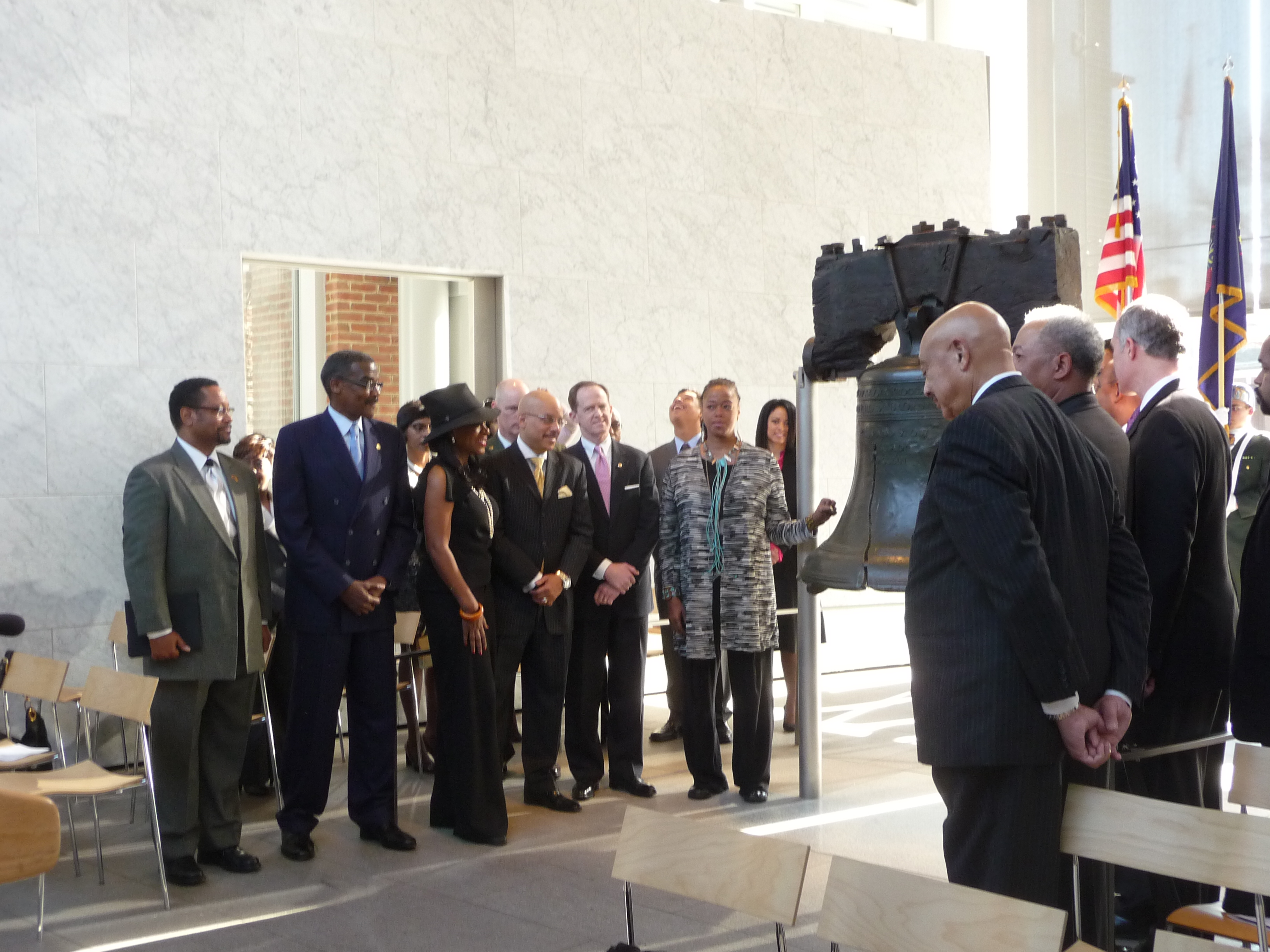 Each year, a member of the civil rights community is elected to ceremonially tap the Liberty Bell in honor of Dr. Martin Luther King Jr. on the King holiday. For the 2012 observance shown here, Malaak Shabazz and Ilyasah Shabazz, daughters of slain National of Islam and civil rights leader Malcom X and Betty Shabazz, were chosen to take part, Malaak (tapping bell) for her work with the United Nations Subcommittee on Racism and Ilyasah for her work with youth education.

The bell-ringing ceremony was first requested in 1986 by King's widow, Coretta Scott King. The ritual has since spread across the nation with replica Liberty Bells being rung in many states. 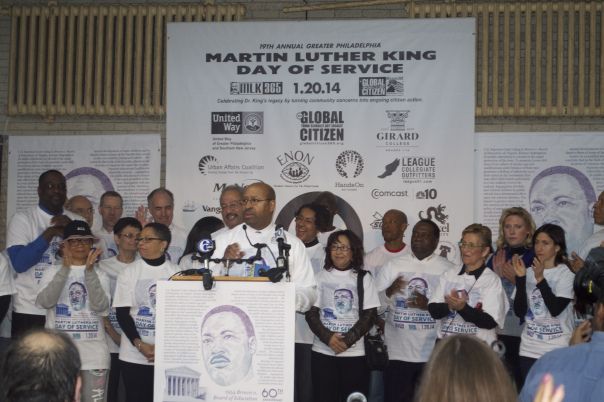 Philadelphia Office of the Managing Director

Martin Luther King Day activities in Philadelphia are organized by Global Citizen's MLK365 initiative, which seeks to turn the annual day of service into a year-round community service effort. In 2014, over 125,000 people participated in service projects ranging from cleaning playgrounds to painting murals, making it the largest King Day observation in the nation. In this January 2014 photo, Philadelphia Mayor Michael Nutter begins the annual observations at Girard College. Nutter's speech to a crowd of 5,000 celebrated the sixtieth anniversary of the Brown v. Board of Education Supreme Court decision that desegregated public schools.
(Photograph by Ryan Berchmeier) 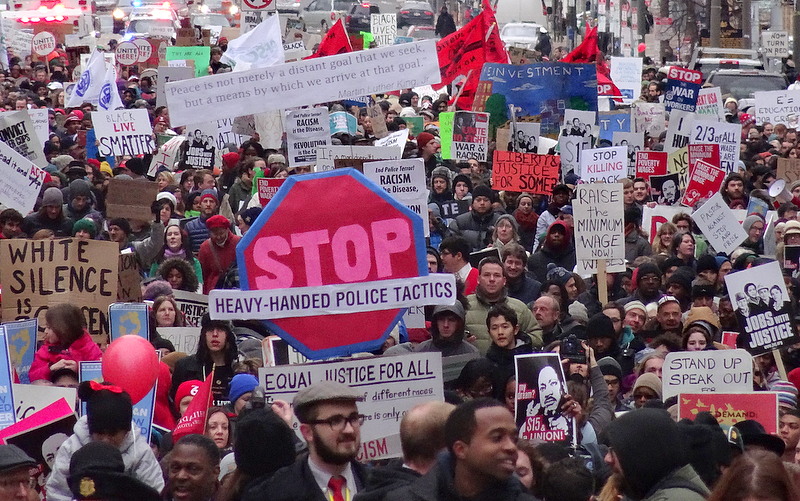 Martin Luther King Jr. Day demonstrators march up Broad Street toward City Hall on January 19, 2015, their signs reflecting a range of social-justice issues, including the fight against racism, the need for a higher minimum wage, the campaign against police brutality, the need for more jobs, and the theme of “black lives matter.” (Photograph by Donald D. Groff for the Encyclopedia of Greater Philadelphia) 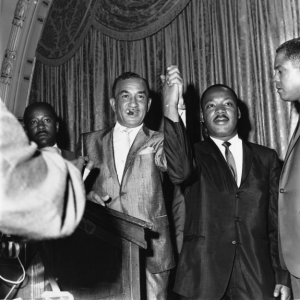 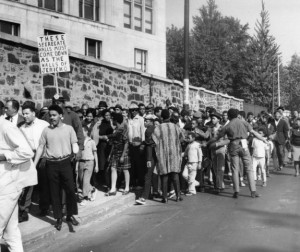 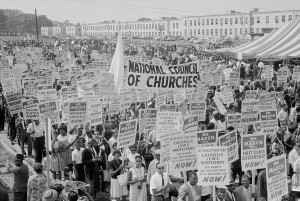 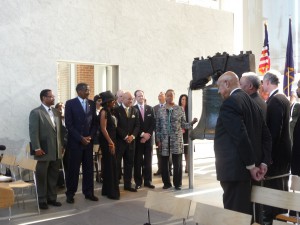 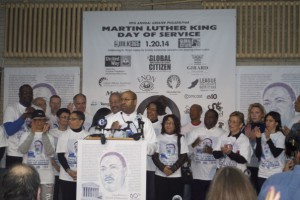 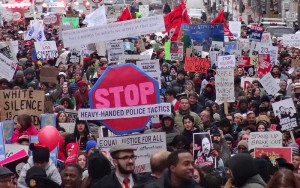 Dyson, Michael. I May Not Get There With You: The True Martin Luther King, Jr. New York: Touchstone, 2000.

Wofford, Harris. Of Kennedys and Kings: Making Sense of the Sixties. Pittsburgh: University of Pittsburgh Press, 1992.