Philadelphia participated early and actively in the founding and development of public broadcasting, which expanded across the twentieth century to encompass radio, television, and digital platforms. Public media organizations have given voice to local concerns, provided forums for diverse opinions, and offered programming not found in commercial broadcasting.

Precedents for public broadcasting originated in the United States in the form of noncommercial educational radio stations in the early days of broadcasting. During the 1920s and 1930s radio became America’s dominant media for entertainment and the instantaneous transmission of news. However, the Great Depression decimated stations run by educational and academic institutions, and by 1933 seventy-five percent of educational stations had ceased broadcasting. Financial problems also plagued educational television stations. In 1938, the Federal Communications Commission (FCC) began reserving a spectrum of channels for noncommercial educational use. By 1952, 242 such stations existed in the United States, but by 1959 the number declined to forty-three.

Three of Philadelphia’s public media outlets had their origins in this era, two with the benefit of support by local universities. At the University of Pennsylvania, WXPN began as a student-run, campus-limited AM radio station in 1945 and gained its license as an FM station from the FCC in 1957. Temple University began its campus-limited AM station in 1948 with call letters indicative of the station’s mission: WRTI, for “Radio Technical Institute.” The FCC licensed WRTI as an FM station in 1953. In 1954 the region also gained WHYY (“Wider Horizons for You and Yours,” an educational radio station founded by a partnership of community leaders including Dr. W. Laurence LePage (1902–85), president of the Franklin Institute. Westinghouse Radio stations donated a studio for WHYY in the Architect’s Building at Seventeenth and Sansom Streets.

WHYY moved into television programming in 1957, broadcasting on an educational station, UHF-Channel 35, which operated under the auspices of the School District of Philadelphia. With support from the city’s cultural and educational institutions, WHYY broadcast news and arts programming from studios at 1622 Chestnut Street—a renowned Art Deco building formerly home to WCAU (later occupied by the Art Institute of Philadelphia). The opportunity to move to Channel 12 on the VHF television dial emerged in 1963 when a VHF license became available in nearby Delaware. WHYY sought and obtained the license from the FCC, then began broadcasting a local news program from a studio in Wilmington at Fifth and Wood Streets. While maintaining this foothold in Delaware, the station subsequently moved into WFIL-TV’s former station facility at Forty-Sixth and Market Streets, donated by media magnate Walter Annenberg (1908-2002).

WHYY became one of the first charter members of the National Public Radio network in 1970. While broadcasting primarily classical music, and some of its locally produced shows began to reach nationwide audiences, including “Fresh Air” (inaugurated in 1975) with Terry Gross (b. 1951) and “Voices in the Family” (which premiered in 1985) with Dan Gottlieb (b. 1946). In 1979, WHYY moved to Sixth Street near Independence Mall, occupying the former the Living History Center, a museum built for the Bicentennial that had gone bankrupt in 1978. The City of Philadelphia leased the building to the station for a dollar a year.

The question of whether the federal government should fund public broadcasting spurred debate by the early 1970s, followed by major cuts during the administration of President Ronald Reagan (1911-2004) in response to conservative allegations of the network’s supposed liberal bias. During this era, the 1980s and 1990s, the region’s public radio stations altered their formats as they searched for expanded audiences and greater sustainability. In 1987, WHYY dropped classical music and transitioned into a mainstay for reporting and commentary on news and the arts. After a commercial station, WFLN, also dropped its classical music format in 1997, Temple’s WRTI partially filled that niche by moving from the all-jazz format it had followed since 1969 to broadcasting classical music during the day and jazz in the evening. At the University of Pennsylvania, from the start WXPN had featured an eclectic mix of musical genres. In 1986 the station repositioned itself to operate as a financially self-sufficient enterprise. Changes included hiring professional staff and initiating professionally-run fundraising drives. The station became known for innovative programming such as Kid’s Corner (begun in 1988), one of the country’s longest-running interactive children’s radio shows, and World Café (debuted in 1991), a showcase of cutting-edge and “world” music distributed by NPR.

All three stations developed networks of regional affiliates. During the 1980s, WRTI expanded its audience to affiliates in northeast and central Pennsylvania well as New York, New Jersey, Delaware, and Maryland. During the 1990s WXPN also increased it listenership by adding a number of regional affiliates throughout Pennsylvania, Delaware, and New Jersey.   WHYY television, in addition to its locations in Wilmington and Philadelphia, added WDPB-Channel 64 (Seaford, Delaware) as an affiliate broadcasting in southern Delaware. The public media landscape also shifted in 2011, after New Jersey Governor Chris Christie (b. 1962) directed the dismantling of NJN (the state’s public television and radio network). While public broadcasting stations in New York bought NJN stations in North Jersey, WHYY acquired WNJS (Berlin), WNJB (Bridgeton), WNJN (Atlantic City), WNJM (Manahawkin), and WNJZ (Cape May Court House).

In the twenty-first century, state, local, and federal funding for public broadcasting continued to shrink. By 2014, according to the Congressional Research Service, the share of federal funding had fallen to only about 15 percent for public television stations and 10 percent for radio, leaving public broadcasting increasingly reliant on corporate and viewer support. While funding and competition for audiences from traditional and digital media remained challenges, the region’s public broadcasters pursued innovation and new platforms to revitalize and promote public media’s mission as the electronic “vox populi.”

Vibiana Bowman Cvetkovic is a reference librarian at the Paul Robeson Library of Rutgers – The State University of New Jersey. (Author information current at time of publication.) 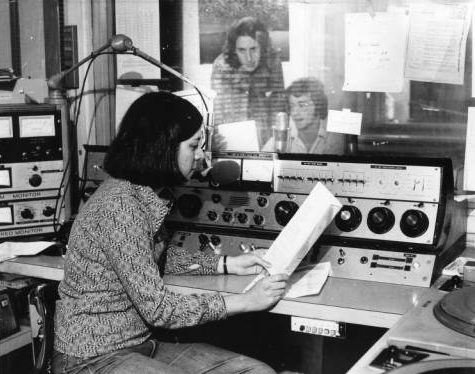 At the University of Pennsylvania, WXPN began as a student-run, campus-limited AM radio station in 1944 and gained its license as an FM station from the FCC in 1957. The station briefly lost its license in 1975 over an obscenity complaint. In 1986, WXPN repositioned itself to operate as a financially self-sufficient enterprise. Changes included hiring professional staff and initiating professionally-run fundraising drives. In addition to an eclectic mix of music, the station became known for innovative programming such as Kid’s Corner (begun in 1988), one of the country’s longest-running interactive children’s radio shows. The station also has been home to popular local DJs such as Michael Tearson, who began their careers there.

During the 1990s, WXPN increased it listenership by adding a number of regional affiliates throughout Pennsylvania, Delaware, and New Jersey, and in 1991, the station debuted World Café, a showcase of cutting-edge and “world” music distributed nationally by NPR. Since 2004, the station has sponsored an annual three-day music festival in Camden, New Jersey. In 2005, WXPN moved to a shared space within a 40,000-square-foot factory building at 3025 Walnut Street, hosting live music events inside a full-service restaurant and bar, as well as bigger concert events in a larger space that also offers dining service. 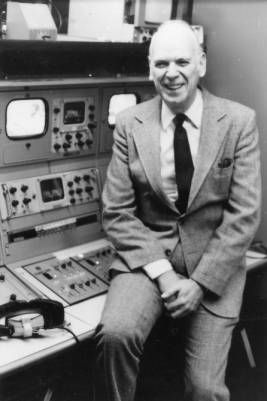 Temple University’s radio station, WRTI, began as an AM station in 1948 and obtained an FM license in 1953. Founded by Temple professor and broadcast pioneer John Roberts as part of the School of Communication and Theater, WRTI began specializing in jazz in 1969. After a commercial station, WFLN, dropped its classical music format in 1997, WRTI partially filled that niche by moving from the all-jazz format to broadcasting classical music during the day and jazz in the evening. 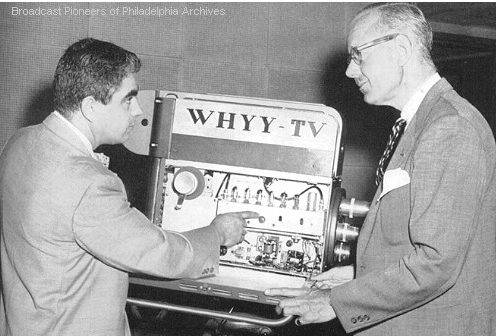 “Wider Horizons for You and Yours,” better known as WHYY, was founded as an educational radio station in 1954 by a partnership of community leaders including W. Laurence LePage, president of the Franklin Institute. In 1957, WHYY moved into television programming. This photograph from that year depicts chief engineer Samuel Barbour (left) showing LePage one of the station’s new studio cameras. WHYY-TV programming was broadcast from studios in Philadelphia on UHF-Channel 35 until 1963, when the station received a VHF license from the FCC and began broadcasting on Channel 12. 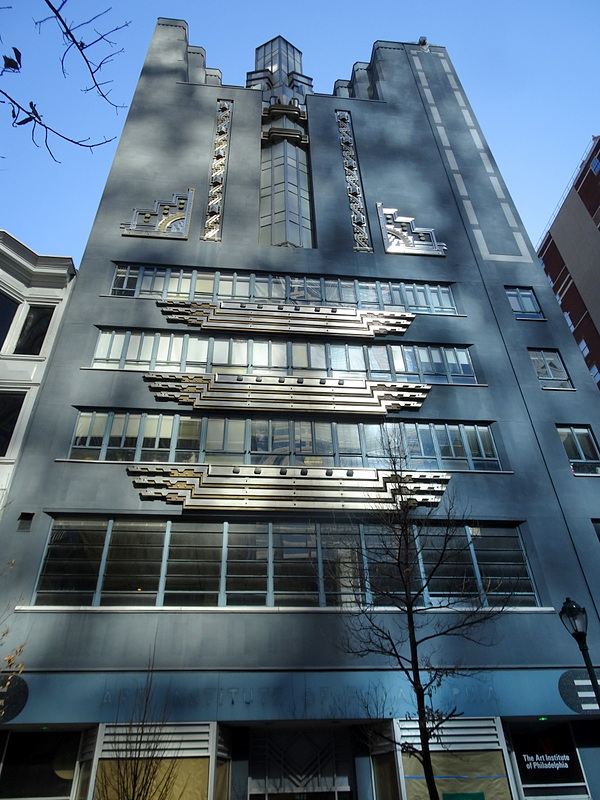 With support from the Philadelphia’s cultural and educational institutions, WHYY broadcast news and arts programming from studios inside this renowned Art Deco building at 1622 Chestnut Street, formerly home to WCAU. Completed in the early 1930s by the architects Gabriel Roth and Harry Sternfeld, the building was the country’s first structure built specifically for a radio station. Fittingly for the home of what was a relatively new communication medium at the time, the building’s Art Deco design expressed a sense of technological virtuosity through its nontraditional forms and materials.

After WHYY moved to WFIL-TV’s former station facility at Forty-Sixth and Market Streets in the early 1960s, the building at 1618-22 Chestnut fell into disrepair until the Art Institute of Philadelphia purchased and renovated it in 1980. In 2015, the building was sold to Pearl Properties, which rented three of the lower stories to Gap Inc. for a new Old Navy store. This photograph of the building was taken in February 2016. (Photograph by Donald D. Groff for The Encyclopedia of Greater Philadelphia) 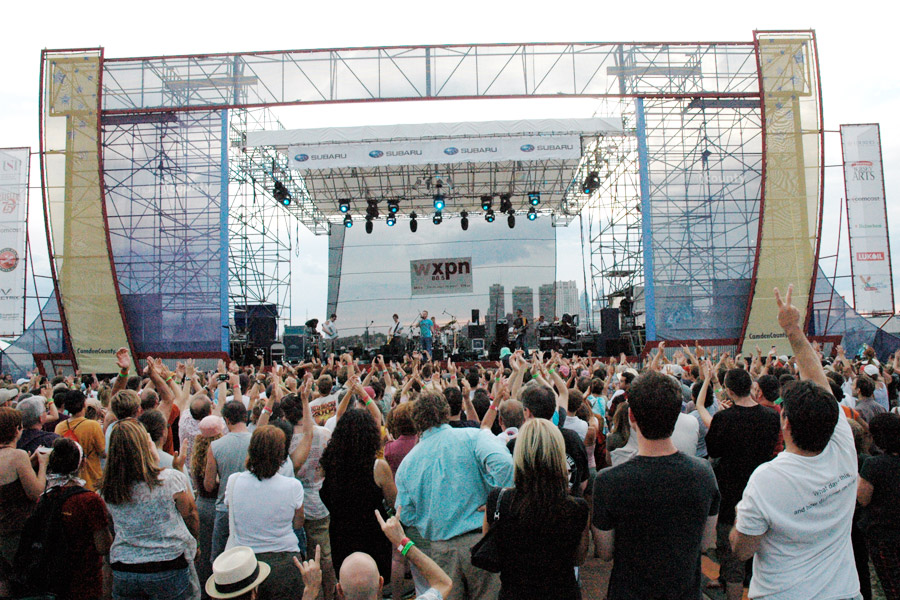 Over the last decade of the twentieth century and into the twenty-first, WXPN-FM, at the University of Pennsylvania, made a name for itself as an innovative alternative radio station. In 1991, for example, the station debuted World Café, a showcase of cutting-edge and “world” music distributed by National Public Radio (NPR). In 2004, the station held its first XPoNential Festival. Pictured here in 2014, the three-day festival is staged in riverfront Wiggins Park, in Camden, New Jersey, across the Delaware River from Philadelphia, and features nationally-known musical acts as well as local groups and family-friendly activities. (Photograph by M. Kennedy). 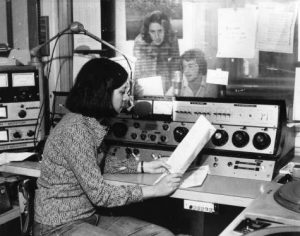 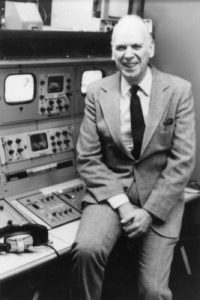 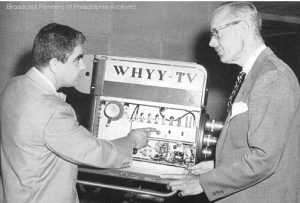 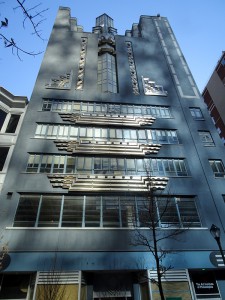 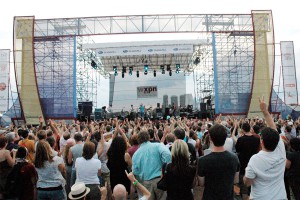