Coins have been minted in Philadelphia as long as the federal government has produced legal tender coins. First authorized by Congress in 1792, the U.S. Mint’s Philadelphia facility (commonly known as the Philadelphia mint) in the early twenty-first century remained the nation’s largest producer of coins. Its history has been intertwined with the complicated history of the American currency system.

Located near the United States Smelting Company, several machine shops, and Reading Railroad tracks, the third Philadelphia mint had an ideal location for receiving raw supplies and transporting finished coins. The massive building occupied nearly a full city block. Because of its generous size and well-chosen location, the third Philadelphia mint quickly became one of the most productive coin manufacturing facilities in the world. The highly productive mint responded to the fluctuating demands of the American economy, ensuring that the nation’s coin supply remained plentiful.

During this period, external political changes altered the metal compositions of the coins produced by the Philadelphia mint. In 1933, the mint ceased production of circulating gold pieces when the federal government abandoned the gold standard. Thus, U.S. paper currency could no longer be exchanged for gold coins or bullion. During the Second World War, the mint contributed to the war effort by producing coins with reduced quantities of nickel and copper (metals vital to the production of arms and munitions), including the famous 1943 steel penny. At the end of 1964, the mint ended the production of circulating silver coins as the federal government went off the silver standard. As a result, “silver certificates,” the United States’ circulating paper money, could no longer be cashed in for their value in silver and silver-based coins became collectors’ items.

Despite the impressive productivity of the third Philadelphia mint, over time its equipment became outdated and its production processes grew increasingly inefficient. In an effort to improve overall efficiency, in 1969 the Philadelphia mint moved once again to a larger, more technologically sophisticated facility on Independence Mall. After the opening of the fourth mint, the building that once housed the third mint was acquired by Community College of Philadelphia, becoming part of the college’s main campus.

Since opening its doors in 1969, the fourth Philadelphia mint has been the United States’ premiere producer of circulating coins. Beginning in the 1980s, the mint diversified its output by producing collectable bullion and commemorative coins and medals. One of the most productive manufacturing facilities in the city, the Philadelphia mint proved capable of producing more than one million coins within a twenty-four hour period. Identified easily by a “P” mintmark or, in the case of pennies and older coins, the absence of a mintmark, coins manufactured at the Philadelphia mint have been among the most readily available in the United States. Evidence of the Philadelphia mint’s impact on the nation’s money supply can be can be found in pockets, piggy banks, and cash drawers throughout the country. 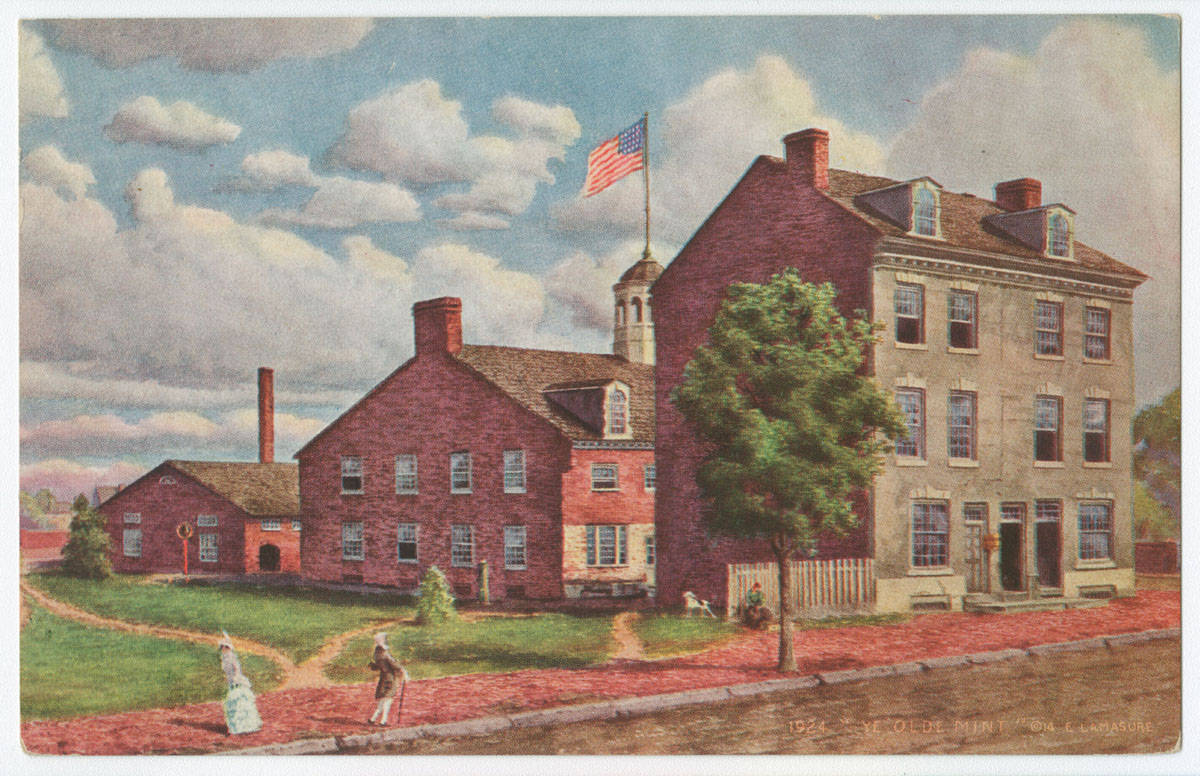 This depiction of the first U.S. Mint building, titled "Ye Olde Mint," was painted by Edwin Lamasure (1867–1916) and appears on a postcard from 1915-1925. The scene shows the outside of the first United States Mint at 37-39 N. Seventh Street in Philadelphia. Built in 1792, it was the first public building erected by an act of Congress. 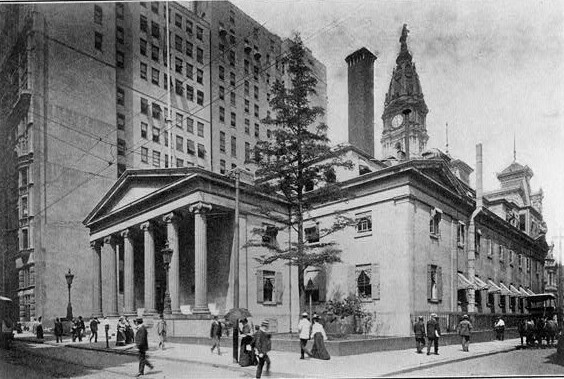 By 1833 the Philadelphia mint was in need of a larger facility, and this site at Juniper and Chestnut Streets provided the necessary space to create the nation’s currency. In use for 68 years, the second Philadelphia mint was witness to many changes in U.S. currency, including the Legal Tender Act of 1862 and the Coinage Act of 1865, both of which led the country toward a nationalized, uniform currency. The second U.S. Mint building, shown here, eventually ran out of space for the expanding production of currency and was demolished in 1902, the year this photograph was made. 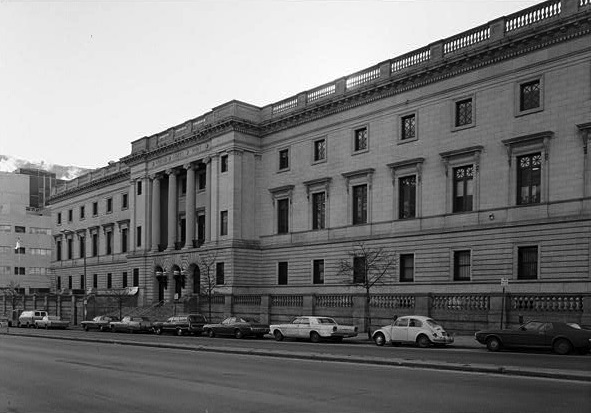 As U.S. currency production expanded along with the country’s population, ever larger mint facilities were required. The third U.S. Mint building, shown here, took up an entire city block at Seventeenth and Spring Garden Streets. After the mint moved once again, the building was purchased by the Community College of Philadelphia, which added the building to its campus. Classes have been held in the Mint Building since 1973, and the first two floors host a variety of art pieces and exhibitions by students and faculty. 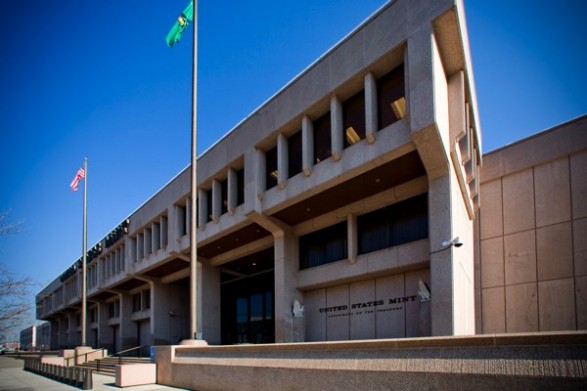 Since opening its doors in 1969, the fourth Philadelphia mint has been the United States' premier producer of circulating coins. Beginning in the 1980s, the mint diversified its output by producing collectible bullion and commemorative coins and medals. One of the most productive manufacturing facilities in the city, the Philadelphia mint proved capable of producing more than one million coins within a twenty-four hour period. The U.S. Mint operates six facilities across the United States with each performing specialized functions. In the twenty-first century, facilities include the U.S. Mint Headquarters in Washington, D.C.; production facilities in Philadelphia; West Point, New York; Denver; and San Francisco; and the United States Bullion Depository at Fort Knox, Kentucky.

Coin Making at the U.S. Mint

Operators tend to a row of coin presses at the third U.S. Mint building on Spring Garden Street between Sixteenth and Seventeenth Streets. One laborer stands next to a hand truck loaded with drawers of coins. This image from 1910 was prepared by the Keystone View Company, a Meadville, Pennsylvania, company that was the world's biggest supplier of stereoscopic viewing images. 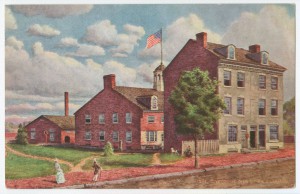 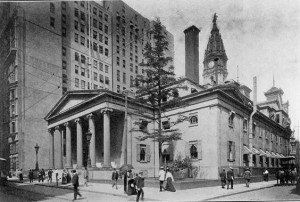 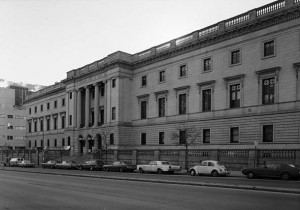 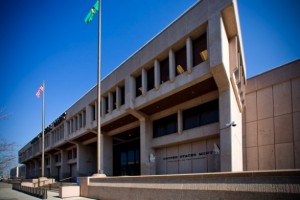 Whitehead, James L. “The Survey of Federal Archives in Philadelphia: With Particular Emphasis on the Records of the Mint and the District Court.” The Pennsylvania Magazine of History and Biography 62, no. 2 (April 1938): 162-174.