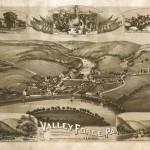 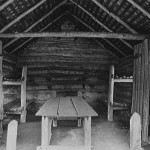 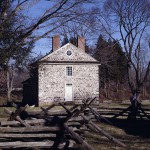 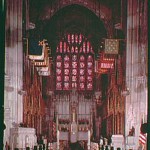 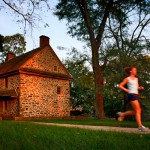 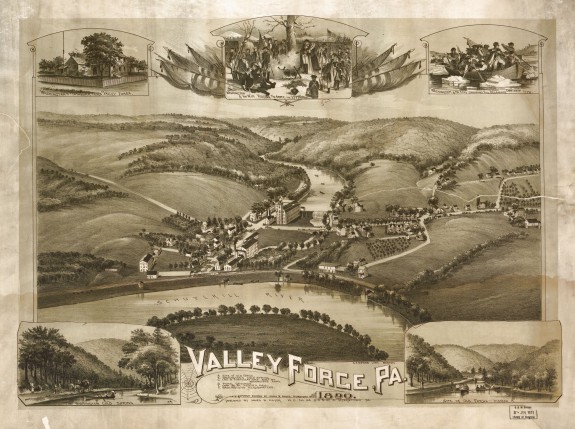 This map of Valley Forge, drawn in 1890, depicts the small town nestled in rolling hills on the banks of the Schuylkill River. The village is located in Chester County and occupies the swath of land where Valley Creek and the river intersect. The southern portion of the park begins at the town and continues west into Montgomery County. When Washington and his troops encamped there during the winter of 1777-78, he counted on the small farms and homes nearby to supply food and other necessities. Almost two-thirds of the area was dedicated to farming and the section along the Schuylkill was populated with industrial buildings—sawmills, blacksmiths, and charcoal houses. By the latter half of the nineteenth century, many of the factories were converted to textile mills. 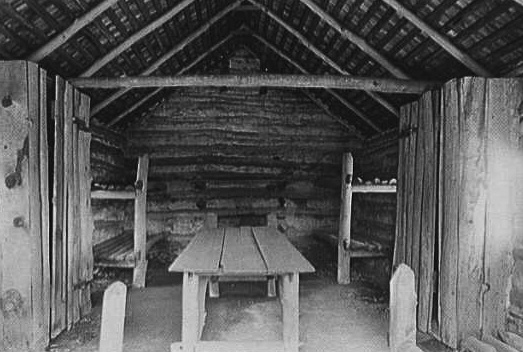 During the winter of 1777-78, the soldiers camped at Valley Forge needed to provide their own shelter. When camped near larger towns or cities the troops were sometimes able to find shelter in the homes of local residents. However, Valley Forge was a relatively sparsely populated farm town at the time and the troops were left to construct their own buildings. This a reconstruction of the “Hospital Hut,” where the soldiers tended their sick and wounded. The bunk beds, made of logs, are similar to the beds found in the men’s regular barracks. The raised wooden slab in the center of the hospital room functioned as an operating table. 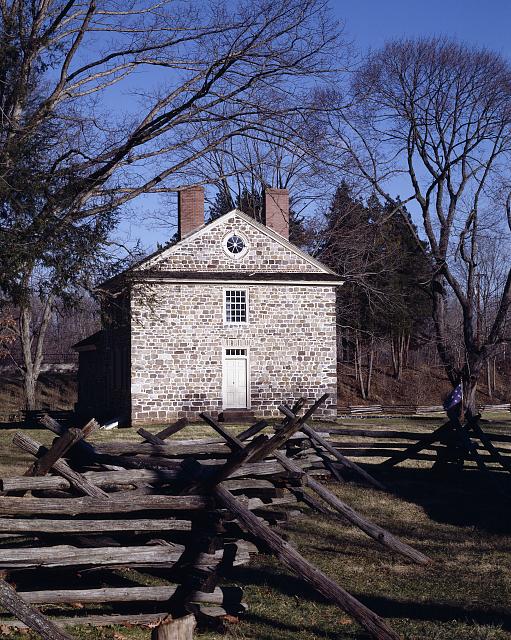 Valley Forge Historical Park preserves the houses that served as headquarters for General George Washington (1732-99) and his officers. Washington’s Headquarters, seen here, have been restored to give visitors to the park a better understanding of Revolutionary War encampments. Quarters for General James Mitchel Varnum (1748-89) and the parade ground where Baron Von Steuben (1730-94) drilled the Continental Army, along with other important historic structures and landscapes, are available to park visitors year-round. 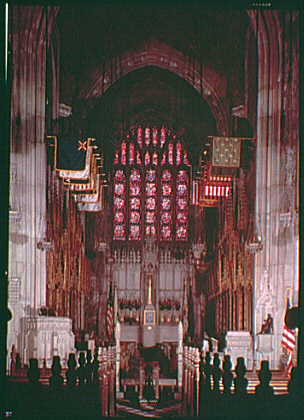 It was well into the nineteenth century before the people of Valley Forge began to romanticize the Continental Army’s takeover of their countryside. Though the farmers of the day were disrupted and disadvantaged by the army, which destroyed much of the farmland and cost the farmers a planting season, by the time of the war’s centennial many residents had laid those grievances to rest. The area’s historic significance and quaint, country location, mad Valley Forge became a tourist destination for Philadelphians. Before the end of the nineteenth century, the former encampment was declared a Pennsylvania state park.

In 1903, 125 years after the army departed Valley Forge, the cornerstone of the Washington Memorial Chapel, pictured here, was laid in the park. Dr. W. Herbert Bunk, an Episcopal priest, had been swept up in the religious and patriotic culture of the time and proposed a chapel be built to honor George Washington and his time in Valley Forge. Over fourteen years, small donations were able to fund the main chapel's construction, and doors opened to congregants in 1917. The chapel is a national memorial to Washington as well as an active church. 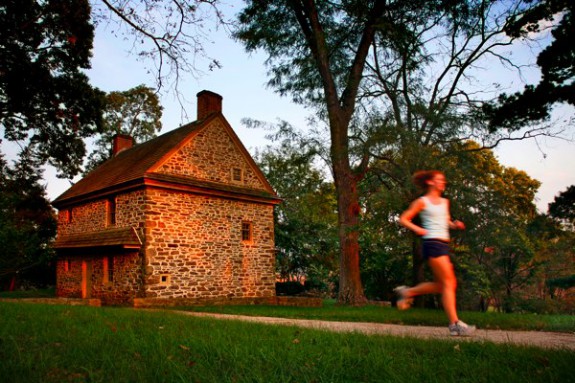 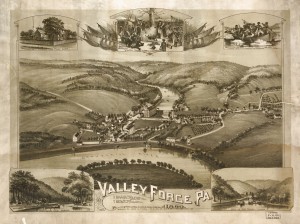 This map of Valley Forge, drawn in 1890, depicts the small town nestled in rolling hills on the banks of the Schuylkill River. (Library of Congress) 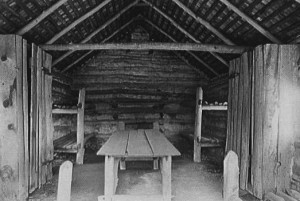 During the winter of 1777-78, the soldiers camped at Valley Forge needed to provide their own shelter. This is a reconstruction of the “Hospital Hut,” where soldiers tended their sick and wounded. (Library of Congress)

Lockhart, Paul. The Drillmaster of Valley Forge: The Baron de Steuben and the Making of the American Army. New York: Harper Perennial, 2010.