When the city demolished all of the houses on the 600 block of Rodman Street (formerly St. Mary Street) in 1899 to expand Starr Garden Playground, the Settlement was forced to move. Instead of moving west across Broad Street and remaining with African Americans, it moved east to 431 and 433 Christian Street because Scudder and the CSA encouraged relocating to a more ethnically-diverse neighborhood. The Settlement’s “Visiting Nurse Report for October 1899 to October 1900” indicated the diversity of the new neighborhood. Of the 489 patients, 216 were native-born Americans, 105 Italians, 70 Russians, 57 Germans, 19 African-Americans, 9 Irish, 7 Polish, 2 Hungarians, and one from each of the following: England, France, Scotland, and Wales.

Opposed to the move to Christian Street because of her life-long dedication to African Americans, Susan Wharton resigned from the Settlement opened Starr Centre at what had been the Settlement’s kitchen/library building at Seventh and Lombard. She later opened Whittier Centre for Blacks in North Philadelphia. Renamed the Susan Parrish Wharton Settlement after her death in 1928, the Settlement continued in the twenty-first century as the Wharton Centre at 1708-10 N. Twenty-Second Street.

Rosina McAvoy Ryan teaches in the Department of History at La Salle University. She earned her Ph.D. at Temple University, where her dissertation examined the College Settlement of Philadelphia. (Author information current at time of publication.) 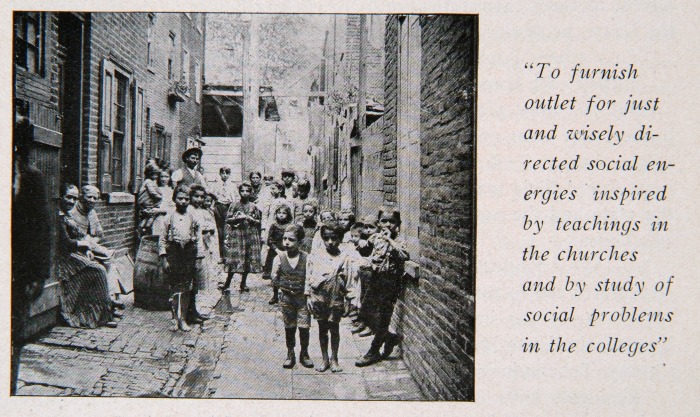 Settlement volunteers often were motivated by a Christian commitment to addressing society's ills, as shown by this illustration and caption published in 1916 in The News of the College Settlement. The photograph, while posed, documents the close conditions of the rowhouse neighborhoods that were home to immigrants arriving in Philadelphia in the early twentieth century. 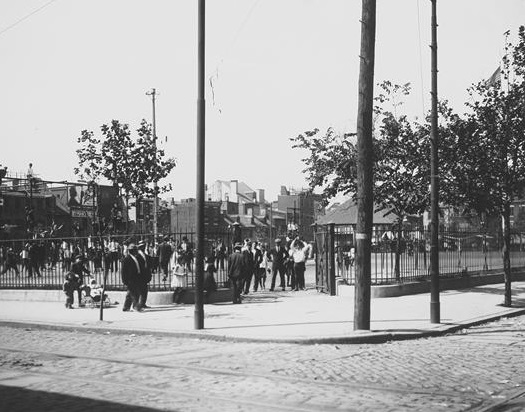 The College Settlement of Philadelphia advocated creating the Starr Garden Playground in the 600 block of Rodman Street, shown here in 1914. The playground displaced the Settlement, which moved from the predominantly African American neighborhood to the more diverse immigrant area near Fourth and Christian Streets. 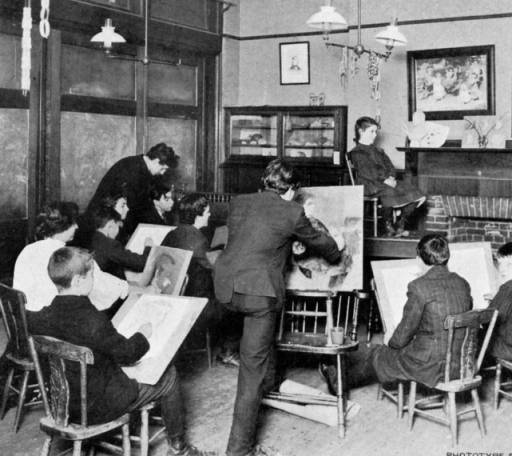 By the end of the nineteenth century, as immigration to Philadelphia and the Jewish population exponentially grew from 12,000 to 200,000 over the span of thirty-five years. With a burgeoning community of new immigrants, a settlement house was established to help immigrants find work and shelter as well as to help in the process of Americanization.

To assist new Jewish immigrants in 1900, single young women of the Progressive era established the Young Women’s Union at Fourth and Bainbridge streets. For many, the settlement house was a source of education, daycare, room and board, as well as healthcare. This photograph shows an art class is in session to instructing immigrants of all ages on the finer points of drawing. This was just one of the many course offerings hosted by the Young Women’s Union at the time. 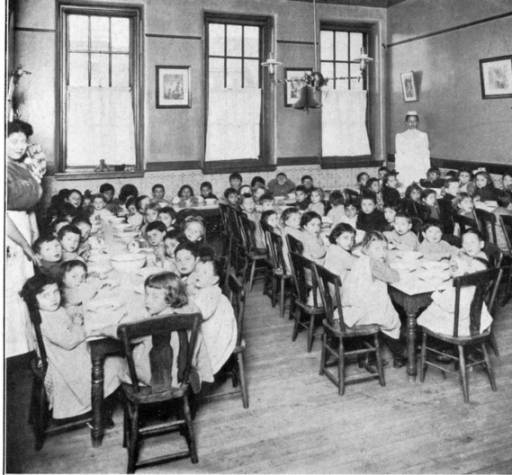 One of the most fundamentally important services offered by settlement houses like the Young Women’s Union was childcare. In this photograph from around 1900, women provide meal service to a room full of young Jewish immigrants around 1900. Though the adults in this image are unidentified, they were part of the small army of educated, single women who pushed for social change in the Progressive Era.

Through their work in settlement houses, women felt empowered to demand a voice in the political arena and created opportunities for themselves in American politics and legislation. With a sense of confidence and determination, the women who worked in settlement houses were able to effect landmark social policy changes. One such policy was the Sheppart-Towner Maternity and Infancy Act of 1921, which provided federal funding to healthcare programs for mothers and infants. 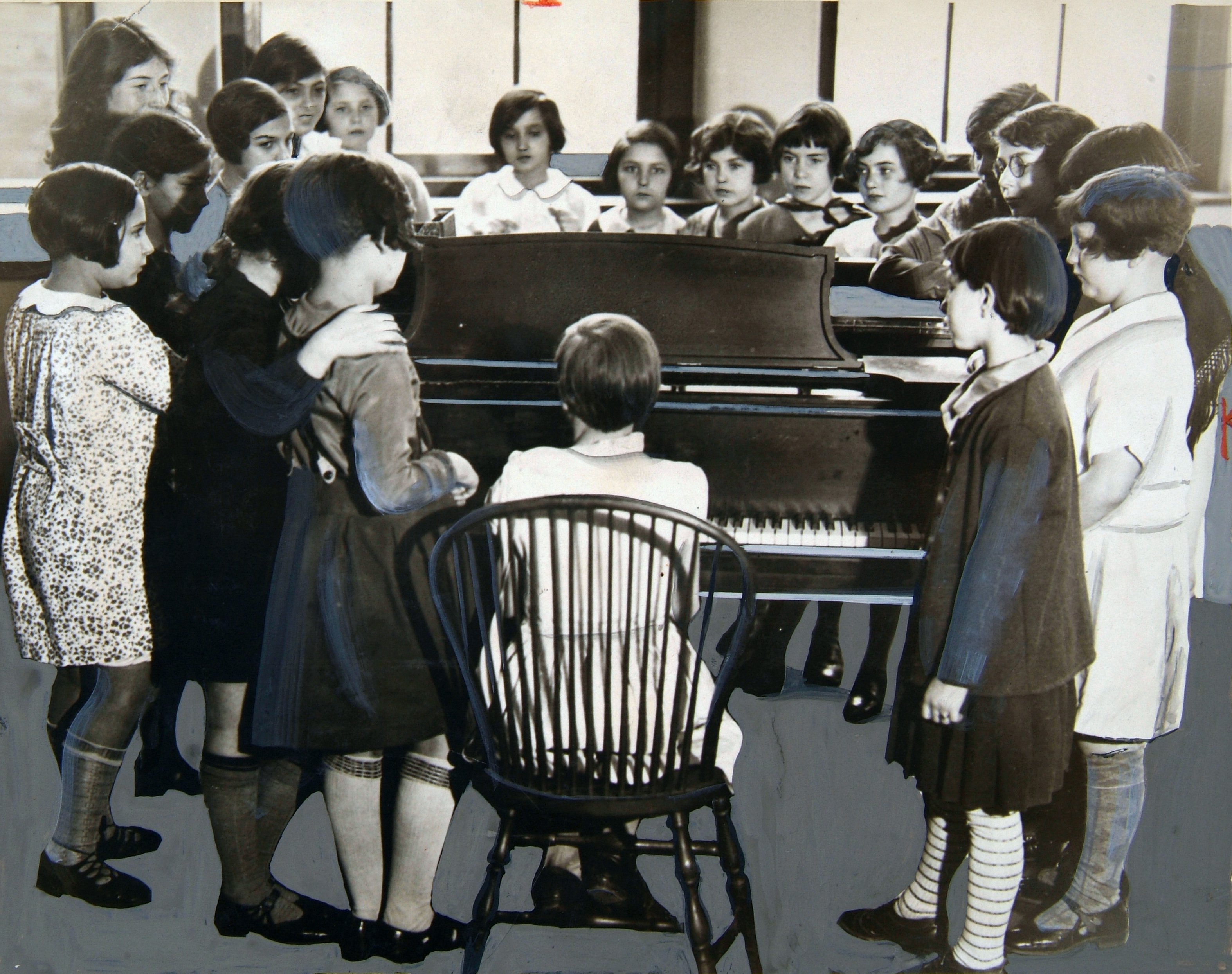 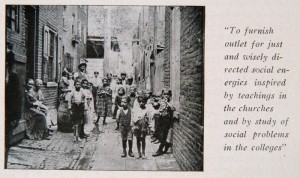 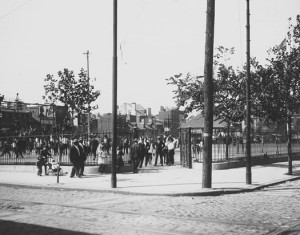 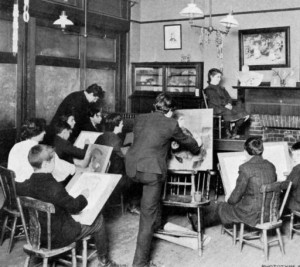 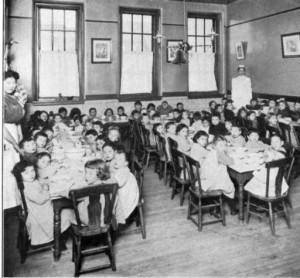 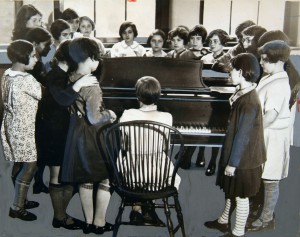 Ryan, Rosina McAvoy. “’A Graduate School in Life’: The College Settlement of Philadelphia and Its Role in Providing Post-Baccalaureate Education for Women.” PhD diss., Temple University, 2006.