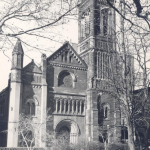 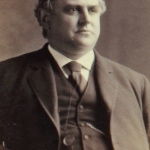 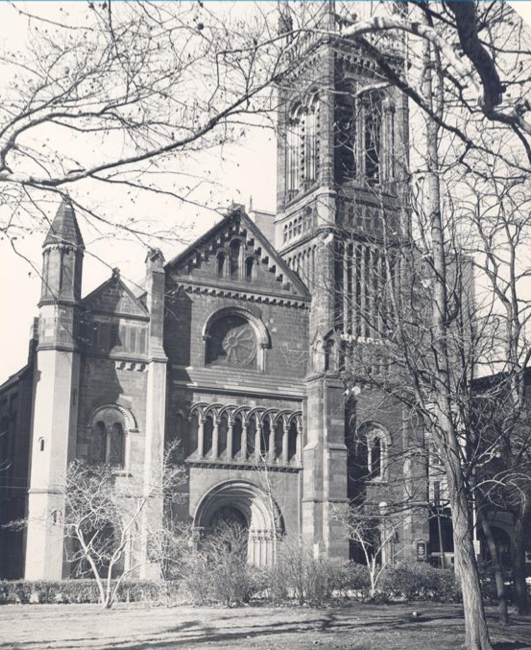 The Church of the Holy Trinity, circa 1900

The Church of the Holy Trinity, where “O Little Town of Bethlehem” was created, dates to 1855, when a group of wealthy merchants met to draft plans for the new Episcopal parish. Their goal was to create a “low church” that offered simple sermons for the neighborhood parishioners. The inaugural services were held on March 27, 1859. During the mid-nineteenth century, powerful lectures and sermons became extremely popular as a form of entertainment, and church leadership joined this by electing Reverend Phillips Brooks (1835-93) as rector. As America was plunged into Civil War, Brooks’ sermons condemning slavery became particularly popular, and his eulogy of Abraham Lincoln’s (1809-65) was reprinted and widely redistributed. After taking a year sabbatical, Brooks returned in 1868 to his parish after traveling to The Holy Land and penned “O Little Town of Bethlehem.”

In the 1890s, the congregation reached nearly 3,000. By the 1960s, the church faced dwindling resources but undertook renovations and increased community outreach programs in order to draw membership. In 2009, the Church of the Holy Trinity celebrated its 150 year anniversary of serving the Philadelphia community in which it has become a fixture. In 2016, the church elected the husband and wife team, Reverends Rachel and John Gardner, as joint rectors. They implemented inclusive community services, such as LGBT outreach programs. 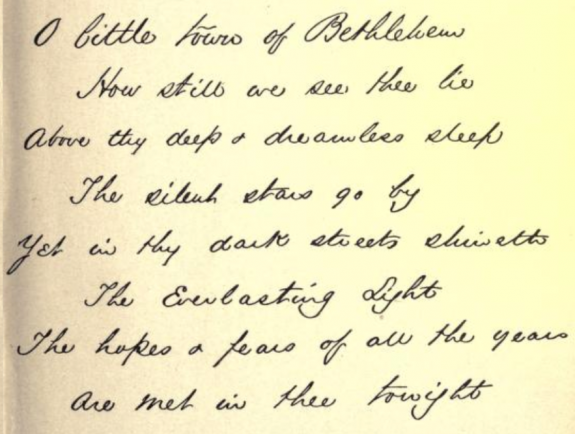 Original penned lyrics of “O Little Town of Bethlehem,” circa 1868

The simple children’s poem penned by Reverend Phillips Brooks (1835–93) in 1868, reproduced in Studies of Familiar Hymns (1903) by Louis F. Benson (1855-1930), eventually became a staple Christmas carol. In the United States, Brooks’s lyrics were set to music composed by Lewis H. Redner (1831–1908), the organist for the Church of the Holy Trinity in Philadelphia; in England, they were paired with the music of “Forest Green.” Around the globe, the song’s popularity grew, and it was eventually performed by many well-known musicians, including Elvis Presley (1935–77) in 1957. One publisher summed up the reason for the song’s popularity, stating, “It is an exquisitely simple thing, and yet one feels behind the words the existence of a great soul, meditating on the mystery of the divine revelation.” 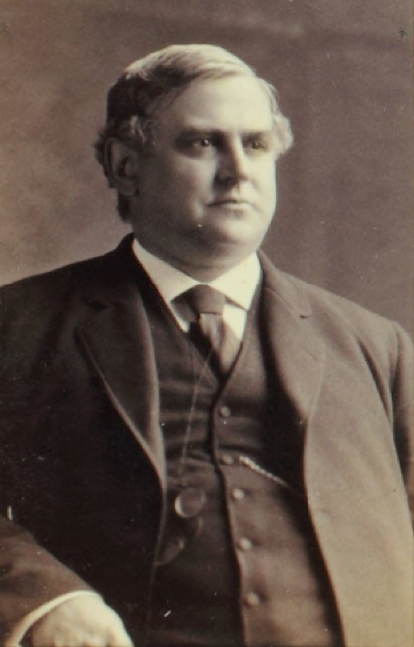 Reverend Phillips Brooks (1835–93) served as rector at the Church of the Holy Trinity (1856) from 1862 to 1869, during which time he traveled to the Holy Land. Three years after his trip, in 1868, he penned the words to the now world-famous holiday hymn “O Little Town of Bethlehem,” originally intended to convey the inspiration he felt while visiting Bethlehem to his Sunday school students at the church. Although Brooks spent most of his career as rector at Boston’s Trinity Church, his time in Philadelphia produced one of the most beloved Christmas carols of all time.

One of the best-known hymns of the Christmas season, “O Little Town of Bethlehem,” originated in 1868 as a poem written for the Sunday School of the Church of the Holy Trinity on Philadelphia’s Rittenhouse Square. The words by Rector Phillips Brooks (1835-93) and music by church organist Lewis H. Redner (1831-1908) resonated themes of stillness and peace in the aftermath of the Civil War. 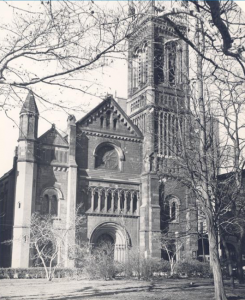 Featured in this circa 1900 photograph is the Church of the Holy Trinity, the site where Reverend Phillips Brooks wrote the much beloved Christmas carol “O Little Town of Bethlehem” in 1868 following a trip to the Holy Land. (PhillyHistory.org)

Born in Boston and educated at Harvard University, Brooks came to Philadelphia after his ordination as an Episcopal priest in 1859. He served first as rector for the Church of the Advent, York Avenue and Buttonwood Street, before moving in 1862 to Holy Trinity, then a new church (built 1856-59) in the area fast becoming the most fashionable in Philadelphia. A dynamic preacher, while still in his twenties Brooks rose in prominence as he preached forcefully against slavery during the Civil War, extended his ministry to African American troops in nearby training camps, advocated equal rights for freedmen, and became active in the Union League. At the end of four years of war, Brooks movingly eulogized Abraham Lincoln (1809-65) and the soldiers who gave their lives. The fallen included his brother George (1838-63), who died of typhoid while serving in the Union Army.

Brooks found the inspiration for his hymn after the war, during a year abroad (1865-66) in Europe and the Holy Land. While traveling, he wrote to the children of his parish about visiting Bethlehem on Christmas Eve and feeling reminded of the hymn-singing of his home congregation. It was not until three years later, however, in 1868, that he reflected on his experience by writing a poem for his Sunday School students, with the first stanza beginning: “O little town of Bethlehem, / How still we see thee lie! / Above thy deep and dreamless sleep / The silent stars go by.” The church organist, Lewis Redner, set the words to the music of a composition he had titled “St. Louis,” and the hymn had its first performance at Holy Trinity during the last Christmas season before Brooks left in 1869 to become rector of Boston’s Trinity Church. 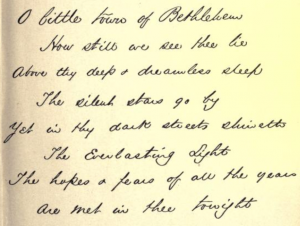 The first two stanzas of “O Little Town of Bethlehem” featuring the author’s own handwriting, circa 1868, were reproduced in Studies of Familiar Hymns (1903) by Louis F. Benson (1855-1930). Reverend Phillips Brooks originally wrote these lyrics as a poem for the Sunday school students of his Philadelphia parish. (Internet Archive)

Brooks subsequently became better known for his service in Boston than his seven years in Philadelphia as he rose to become Bishop of Massachusetts and, among many other calls to preach, delivered a sermon for Queen Victoria in Westminster Abbey. Following his death in 1893, Bostonians memorialized Brooks in Copley Square with a monument by August Saint-Gaudens (1848-1907). “O Little Town of Bethlehem” lived on, sung in the United States in the form composed by Redner and in England to the tune of an English folk song, “Forest Green.”  An early publisher of Brooks’s papers observed of the hymn, “It is an exquisitely simple thing, and yet one feels behind the words the existence of a great soul, meditating on the mystery of the divine revelation.” Composed in Philadelphia, published in hymnals for many denominations, and performed by musicians from Elvis Presley (1935-77) to the Mormon Tabernacle Choir, “O Little Town of Bethlehem” became an annual and beloved hallmark of the Christmas season.

Charlene Mires is Professor of  History at Rutgers-Camden and Editor-in-Chief of the Encyclopedia of Greater Philadelphia.

Graham, David A. “‘Oh Little Town of Bethlehem’ from Both Sides of the Atlantic.” Atlantic.com, September 15, 2015.