Written in 1855 by a Philadelphia songwriter who was inspired by the whistling of a street musician, “Listen to the Mocking Bird” was one of the most popular songs of the nineteenth century. It sold millions of copies of sheet music and was sung (and whistled) throughout the United States and parts of Europe.

Philadelphia songwriter and music businessman Septimus Winner (1827–1902) wrote the song using a tune he heard an African American street musician whistle. Richard Milburn, known as “Whistling Dick,” played guitar and whistled on Philadelphia streets for money in the mid-nineteenth century. One of his entertainments was to imitate a mockingbird by whistling a particular melody. Winner took this melody and wrote lyrics to it. With its catchy “listen to the mockingbird” refrain, the song became hugely popular.

Septimus Winner was a well-known songwriter, music teacher, music publisher, and proprietor of a music store in mid to late nineteenth-century Philadelphia.  He wrote many successful popular songs and was a poet as well. Like many writers of his era, Winner wrote under an assumed name, “Alice Hawthorne.” Hawthorne was the maiden name of Winner’s mother, who was a relative of the writer Nathaniel Hawthorne (1804–64). Winner first published “Listen to the Mocking Bird” in 1855 through his own publishing company, Winner & Shuster, and listed the songwriting credits as “Melody by Richard Milburn . . .  Written and arranged by Alice Hawthorne.” He later sold the copyright to the song to another Philadelphia publisher, Lee & Walker, whose subsequent editions omitted Milburn and gave the writing credit solely to Hawthorne.

Winner did not reap significant financial rewards from “Listen to the Mocking Bird,” as he sold the copyright for five dollars soon after the song’s original publication. A Philadelphia newspaper in the early twentieth century estimated that the song‘s sheet music sales had totaled over twenty million copies in America and Europe in the fifty years since its publication. It is doubtful that Richard Milburn profited much from the song either. Winner employed him for a time running errands at his music store. Milburn also may have worked as a barber.

Although the melody to “Listen to the Mocking Bird” was upbeat, Winner’s lyrics were in the tradition of the mid-nineteenth-century American sentimental ballad. Songs with sad, often maudlin lyrics of mourning the loss of a loved one, longing for home, or cherishing memories of happier times were very popular in this period. In “Listen to the Mocking Bird,” the singer is mourning the loss of his beloved Hally, visiting her gravesite and listening to a mockingbird sing, as they often did together when she was alive.

Curiously, some of the sheet music versions of “Listen to the Mocking Bird” listed it as an “Ethiopian” ballad. “Ethiopian” was a designation for a minstrel song, another very popular type of song at that time that featured stereotypical, derogatory depictions of African Americans, lampooning them with “Negro dialect” lyrics and music. While labeled on some sheet music covers as a “sentimental Ethiopian ballad,” neither the words nor the music to “Listen to the Mocking Bird” exhibited any characteristics of a minstrel song.

“Listen to the Mocking Bird” became a beloved song in the United States and Europe. Abraham Lincoln (1809–65) described it as “a real song . . . as sincere and sweet as the laughter of a little girl at play,” and later in his life King Edward VII of England (1841–1910) recalled whistling it as a little boy. Into the early twenty-first century “Listen to the Mocking Bird” remained one of the most familiar songs in American history.

Jack McCarthy is a music historian who regularly writes, lectures, and gives walking tours on Philadelphia music history. A certified archivist, he recently directed a major project for the Historical Society of Pennsylvania focusing on the archival collections of the region’s many small historical repositories. Jack serves as consulting archivist for the Philadelphia Orchestra and the Mann Music Center and worked on the 2014 radio documentary Going Black: The Legacy of Philly Soul Radio. He gave several presentations and helped produce the Historical Society of Pennsylvania’s 2016 Philadelphia music series “Memories & Melodies.” (Author information current at time of publication.) 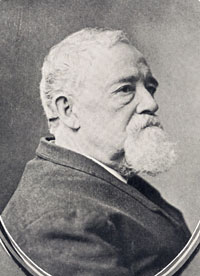 Septimus Winner was born in 1827 in Philadelphia. He was musically talented and played multiple instruments, giving lessons in the mandolin, violin, and guitar. Winner also formed publishing companies though which he published his songs.

Along with “Listen to the Mocking Bird,” Winner wrote other very popular songs such as "Ten Little Indians," "Oh Where, Oh Where Has My Little Dog Gone,“ "How Sweet Are the Roses,” and “Raw Recruits.”

Similar to “Listen to the Mocking Bird,” “How Sweet Are the Roses” is a song with somber lyrics, telling a story about roses being picked and their beauty eventually fading. “Raw Recruits” centers on the Civil War and the story of Union volunteer soldiers going south to fight for President Abraham Lincoln.

Although his song “Raw Recruits” underscored Winner’s support for the Union, the Philadelphia songwriter was actually arrested during the Civil War for composing a song that federal authorities considered treasonous titled “Give us Back Little Mac Our Old Commander.” The song objected to Abraham Lincoln's dismissal of General George McClellan as commander of Union forces. Eventually, the charges of treason were dropped.

Winner died in Philadelphia in 1902. 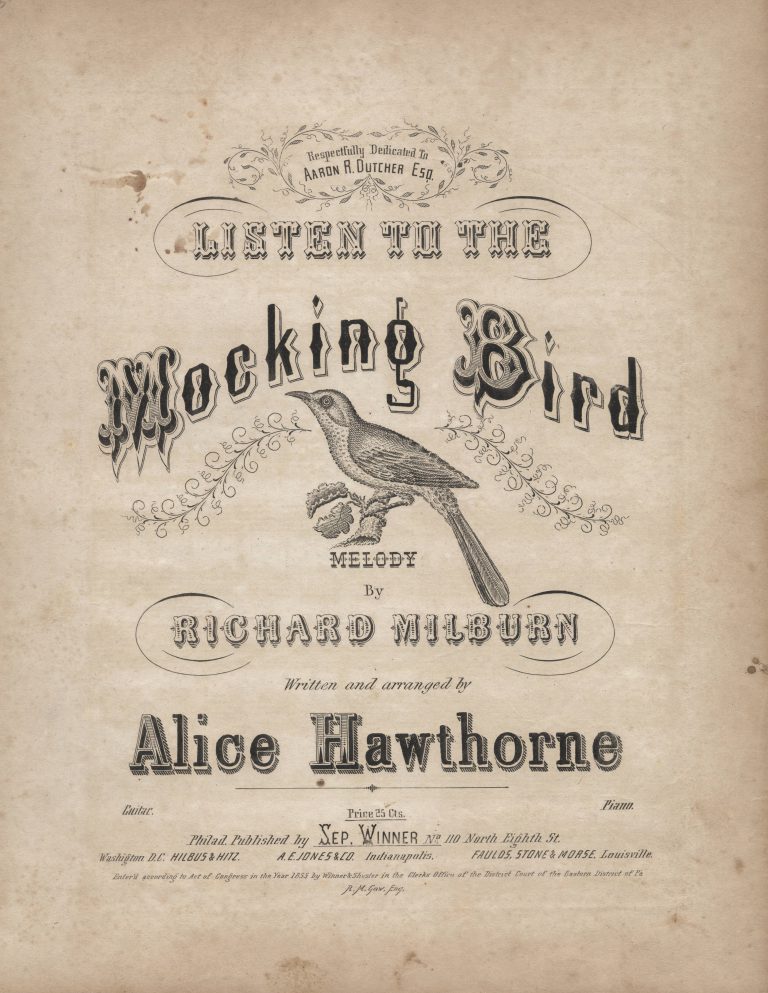 “Listen to the Mocking Bird” was born in 1855 when Septimus Winner used a melody being whistled by Philadelphia street performer Richard Milburn. Nicknamed “Whistling Dick,” Milburn was known for whistling and playing guitar on the streets of the city. Hearing Milburn’s whistling technique, imitating the sound of a mockingbird, Winner developed the idea for the song.

Winner, who was also a businessman, published the song through his company Winner and Shuster. Milburn was credited for the melody under Winner and Shuster, but after Winner sold the copyright to another publisher, Milburn went uncredited in subseuent editions. Ultimately, neither Winner nor Milburn reaped benefits from the song’s popularity.

Many musicians and performers from various musical genres performed renditions of “Listen to the Mocking Bird,” including country singer Dolly Parton, bluegrass fiddler Stuart Duncan, jazz clarinet player George Lewis, and jazz trumpeter and singer Louis Armstrong. “Mocking Bird” also captivated the hearts of some historic figures, including King Edward VII of England, who whistled the tune in his youth, and U.S. President Abraham Lincoln, who was said to be fond of song. 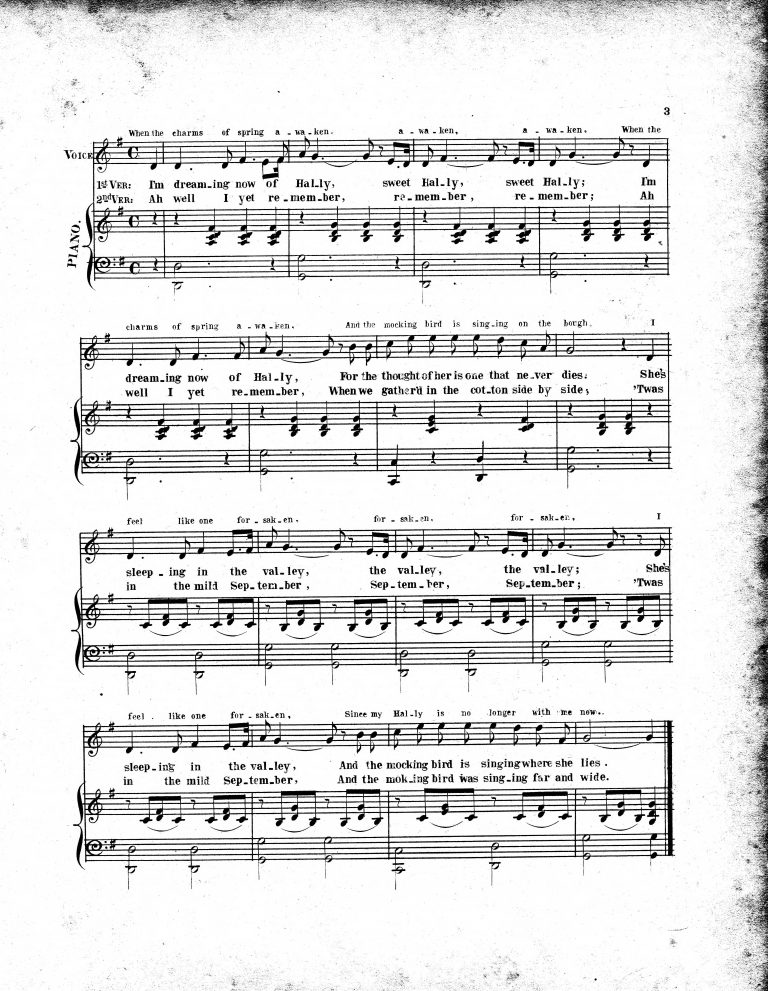 The lyrics of “Listen to the Mocking Bird” revolve around a woman named Hally, who has died. Her lover expresses his reverence for her after her death, with the lyrics “I’m dreaming now of Hally sweet Hally.” While listening to a mockingbird singing at Hally’s gravesite, the lover in the song reminisces about his time with Hally and says “the thought of her is one that never dies.”

Lyrics from this music sheet: 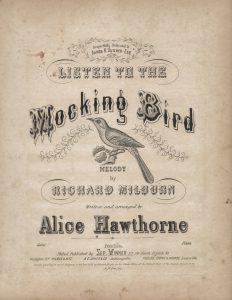 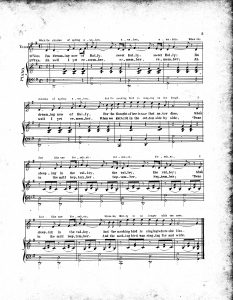 Claghorn, Charles Eugene.  The Mocking Bird: The Life and Diary of Its Author, Sep. Winner. Philadelphia: The Magee Press, 1937.