We are pleased to share the news that The Encyclopedia of Greater Philadelphia has reached a new milestone: 350 topics online. Thanks to the many people who are making this project possible: authors, editors, reviewers, fact-checkers and page-builders, and the archival partners who provide illustrations. Our current phase of expansion is made possible by generous grants from the National Endowment for the Humanities, the Mayor’s Fund for Philadelphia, and Poor Richard’s Charitable Trust.

Topic #350 is Surveying (Colonial), by Michael Pospishil.  Stay tuned for more this summer!

This month we passed a new milestone in the creation of The Encyclopedia of Greater Philadelphia: our 300th topic published online. Published on March 8, topic number 300, “Board of Health (Philadelphia),” by James Higgins, added to our growing category of topics about health and medicine.  We would like to take this opportunity to thank the many contributors, civic partners, and staff members at Rutgers-Camden who are devoting their talents and good will to the service of this resource for the Philadelphia region. Our current phase of expansion is made possible by generous funding from the National Endowment for the Humanities, the Mayor’s Fund for Philadelphia, and Poor Richard’s Charitable Trust.

We’re delighted to see our recently published essay about Admiral Wilson Boulevard, by Bart Everts, featured in the New Jersey edition of the Philadelphia Inquirer. Learn more about the author and the surprising history of the highway in Kevin Riordan’s column, “Camden’s Boulevard of Unfulfilled Dreams.”

Which topics were our most-visited during 2015? Our statistics reveal some patterns:  The political season seems to have had an impact on readership of topics related to immigration and nativism.  We also see heavy use of topics related to Philadelphia’s decade as the nation’s capital, a popular subject for students and teachers in U.S. history courses.  Finally, there are some distinctively Philadelphia topics in our top ten.

Here is the list, beginning with the tenth most-read and leading to number one:

9.  Philadelphia and Its People in Maps: The 1790s, by Paul Sivitz and Billy G. Smith

We always see a surge of traffic to “City of Brotherly Love” when sports announcers invoke the phrase during nationally televised Eagles games!

Thanks to all of our authors and to the 227,733 unique visitors who came to The Encyclopedia of Greater Philadelphia during 2015.  We look forward to expanding our coverage for you in the new year.

Applications are due March 2 for this new teacher workshop funded by the National Endowment for the Humanities. Cultures of Independence: Perspectives on Independence Hall and the Meaning of Freedom will raise awareness of how Independence Hall has been involved in the ongoing process of creating a nation and civic life, not just in the magical moment of July 1776.  During each day of  a week-long workshop, 36 teachers will be immersed in a process of discovering and developing strategies for teaching the ongoing history of the American independence. Dr. Charlene Mires, author of Independence Hall in American Memory and Editor-in-Chief of The Encyclopedia of Greater Philadelphia will be the scholar-in-residence. Other editors, contributors, and civic partners of the Encyclopedia will participate as speakers and hosts.

The workshop will be offered twice:  June 21-26 and July 26-July 31. For additional information about the program and procedures for application, visit the workshop website hosted by the Historical Society of Pennsylvania.

To commemorate the 150th anniversary of the Thirteenth Amendment and the abolition of slavery, local cultural institutions will host screenings of clips from Created Equal: America’s Civil Rights Struggle.  The African American Museum in Philadelphia (AAMP), Historical Society of Pennsylvania (HSP), the National Constitution Center (NCC), and the Philadelphia History Museum (PHM) have also developed programming using these video clips to launch larger explorations of whether or not equality is ensured with the passage of new laws or amendments.  For details about these free events, which are co-sponsored by The Encyclopedia of Greater Philadelphia, please visit our events page.

These four documentaries feature riveting new footage illustrating the history of civil rights in America. Each film tells remarkable stories of individuals who challenged the social and legal status quo of deeply rooted institutions, from slavery to segregation. Abolitionists, Slavery by Another Name, The Loving Story, and Freedom Riders include dramatic scenes of incidents in the 150-year effort to achieve equal rights for all. Presentations and discussions featured in the AAMP, HSP, NCC, and PHM programs will focus on the specific themes and subjects of the documentary series.

“We are thankful to the NEH and Gilder Lehrman Institute for the ability to bring these programs to Philadelphia. It is an opportune time to be having these conversations,” said Beth Twiss Houting, HSP’s Senior Director of Programs and Services.

Educators will also be able to receive ACT 48/CEU credits at each Created Equal? event. A teacher workshop on February 28 will also focus on civil rights struggles.

The Created Equal film set and public programs have been made possible by a major grant from the National Endowment for the Humanities, as part of its Bridging Cultures initiative, in partnership with the Gilder Lehrman Institute of American History.

Created Equal: America’s Civil Rights Struggle is made possible through a major grant from the National Endowment for the Humanities, as part of its Bridging Cultures initiative, in partnership with the Gilder Lehrman Institute of American History. 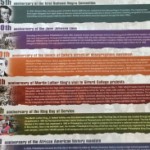 The poster “Deep Roots, Continuing Legacy: Philadelphia in the Struggle for Civil Rights” is a new project from History Making Productions, the documentary film company that strives to share Philadelphia’s rich history through the powerful medium of film. We hope that the poster will encourage Philadelphia residents to delve into our rich, fascinating, and continuous role in the fight for equal rights. Many of the events depicted on the poster are featured in History Making Production’s film series, Philadelphia: The Great Experiment. These films are available at no cost and online at historyofphilly.com.

The Encyclopedia of Greater Philadelphia is one of the many cultural and civic organizations partner organizations that have helped to produce the poster. We are among the partners that have also supplied supplementary materials that complement and extend the content on the poster. For more information, teaching ideas, and primary sources, go to historyofphilly.com/philadelphia-the-great-experiment

The Encyclopedia of Greater Philadelphia is expanding and opening new subject categories with support from the National Endowment for the Humanities, the Mayor’s Fund for Philadelphia, and Poor Richard’s Charitable Trust. To join more than one hundred leading and emerging scholars who have already contributed to this peer-reviewed, digital-first project, let us know your choice of topics.

To see the list of topics available link here.

The scope of the project includes the city of Philadelphia and the surrounding region of southeastern Pennsylvania, South Jersey, and northern Delaware. Prospective authors must have expertise in their chosen subjects demonstrated by previous publications and/or advanced training in historical research. Authors will have the opportunity to select feasible deadlines and will have the option of volunteering or receiving modest stipends. To express interest, please send an email describing your qualifications and specifying topics of interest to the editor-in-chief, Charlene Mires, cmires@camden.rutgers.edu. No attachments, please. Graduate students, please include the name and email address of an academic reference.

Invitation to graduate students and other interested scholars: The Encyclopedia of Greater Philadelphia, based at Rutgers-Camden, is forming a working group to do original research into Philadelphia’s connections with other regions of the United States and the world. You can help us enhance the Encyclopedia with these topics and break new ground – and perhaps find a thesis, dissertation, or book topic in the process. We anticipate a meeting early in the spring and research during the summer. Modest compensation is available for accepted essays, which will be peer-reviewed.

Let us know if you are interested! Send an email with a brief description of your interests and qualifications to Charlene Mires, cmires@camden.rutgers.edu. 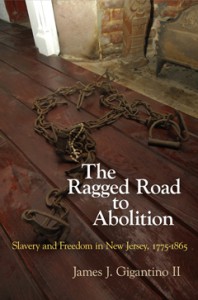 Contrary to popular perception, slavery persisted in the North well into the nineteenth century. This was especially the case in New Jersey, the last northern state to pass an abolition statute, in 1804. Because of the nature of the law, which freed children born to enslaved mothers only after they had served their mother’s master for more than two decades, slavery continued in New Jersey through the Civil War. Passage of the Thirteenth Amendment in 1865 finally destroyed its last vestiges.

The Ragged Road to Abolition chronicles the experiences of slaves and free blacks, as well as abolitionists and slaveholders, during slavery’s slow northern death. Abolition in New Jersey during the American Revolution was a contested battle, in which constant economic devastation and fears of freed blacks overrunning the state government limited their ability to gain freedom. New Jersey’s gradual abolition law kept at least a quarter of the state’s black population in some degree of bondage until the 1830s. The sustained presence of slavery limited African American community formation and forced Jersey blacks to structure their households around multiple gradations of freedom while allowing New Jersey slaveholders to participate in the interstate slave trade until the 1850s. Slavery’s persistence dulled white understanding of the meaning of black freedom and helped whites to associate “black” with “slave,” enabling the further marginalization of New Jersey’s growing free black population.