The Delaware Valley Regional Planning Commission (DVRPC) was founded in 1965 to coordinate planning activities within a nine-county area, which included Philadelphia, Bucks, Chester, and Delaware Counties in Pennsylvania and Camden, Burlington, Gloucester, and Mercer Counties in New Jersey. In the decades since its founding, DVRPC has worked to foster economic development, direct transportation projects, protect the natural environment, and study land use and housing conditions within the Greater Philadelphia metropolitan area. Throughout its history, DVRPC has tried to balance the needs of its urban centers with the growing power of its car-dependent suburbs.

In the early twentieth century, Philadelphia’s regional planners advocated a purposefully decentralized vision for metropolitan growth. Taking advantage of the expanding range and popularity of the automobile, they sought to alleviate the overcrowding of central cities by directing growth into the rural hinterland. In 1928, a coterie of Philadelphia-area power brokers—municipal reformers, corporations, planners, and real estate developers—created the region’s first formal planning organization, the Regional Planning Federation of the Philadelphia Tri-State District. The federation’s director, Russell Van Nest Black (1893-1969), drew up a utopian plan for the area. His proposal suggested the construction of newly built garden cities—planned, dense, self-contained communities—surrounded by parks and open space, to be connected to Philadelphia via rail and automobile. But these plans proved quixotic, hamstrung by a lack of funds and coordination between local, state, and federal governments.

All of that changed in the 1950s as the federal government made massive investments in the nation’s highway system. The 1956 Federal-Aid Highway Act, which provided $25 billion towards the construction of new interstates, required the close synchronization of federal and state planners. As automobile use skyrocketed and government subsidies helped underwrite the construction of new suburbs, the need to harmonize the planning decisions of cities and surrounding counties became acute.

Planning for the Region

In 1959, the Penn Jersey Transportation Study brought together experts from nine area counties and local universities, under executive director Henry Fagin (1913-2009), to coordinate the region’s implementation of the Highway Act’s transportation initiatives. They sought answers to several key questions: Where would Pennsylvania and New Jersey build their interstate highways? How could the region optimize land use while maximizing economic development? What path might growth take, given different governmental policies, transportation decisions, corporate behavior, and market forces? The study also explored the possibility of creating a permanent organization to manage ongoing land use and transportation planning.

The direct impetus for the creation of the DVRPC was the 1962 Federal-Aid Highway Act. It mandated that all urbanized areas with populations over 50,000 establish a metropolitan planning organization to direct the local expenditure of federal transportation and housing funds by means of a “continuing, comprehensive and cooperative” planning process. In response, the counties and cities that had participated in the Penn Jersey Transportation Study formed DVRPC by means of the Delaware Valley Urban Area Compact, which Pennsylvania’s Governor Raymond Shafer (1917-2006) signed into law on June 30, 1965. New Jersey officially joined the commission by ratifying companion legislation in 1967. The new commission included appointed representatives from each of the member states and counties and the cities of Camden, Philadelphia, Trenton, and Chester, along with New Jersey’s commissioner of transportation and commissioner of community affairs, and Pennsylvania’s secretary of highways and executive director of its State Planning Board.

DVRPC began work on its first regional long-range plan with an extensive series of aerial photographs. Beginning in 1959 and repeated every five years thereafter, flyovers were conducted across the 3,833-square-mile DVRPC region. These aerial photographs were used to track the chronological progression of area land use and economic growth. Survey by survey, photographs documented the spread of suburban development into the rural areas surrounding the region’s urban centers. Aerial photography also had a powerful effect on planners’ imaginations. Traditional political maps had encouraged parochialism by reinforcing the importance of municipal boundaries. But overhead photography demonstrated the region’s interconnectedness. Roads, rail, and rivers seamlessly connected cities to suburbs, farms to factories, and ports to the sea. Viewing the Delaware Valley through these photographs, planners began to acquire a sense of the region as a coherent whole.

In the years to follow, that holistic vision fostered a newfound awareness of the environmental impact of urban development. After the passage of the National Environmental Policy Act in 1970, DVRPC began research on the region’s air and water quality. It also assumed responsibility for water supply, natural resource, greenway, and solid waste planning. Later in the decade, DVRPC issued a region-wide watershed management plan to protect the area’s surface and groundwater resources in accordance with the Clean Water Act of 1972.

DVRPC’s scope extended beyond environmental, land use, and transportation planning. In the late 1960s, it turned its attention to historic preservation, which thereafter became a key factor in its comprehensive planning mission. DVRPC’s 1969 report on historic preservation compiled the first master list of sites worthy of protection in its open space plans. DVRPC promoted historic designation for numerous historic structures—ones like James Fenimore Cooper’s birthplace in Burlington, New Jersey, and Frank Lloyd Wright’s multifamily homes in Ardmore, Pennsylvania. DVRPC also emphasized the importance of historic sites to the tourism industry, which was expected to explode as visitors flocked to the region in 1976 for Bicentennial celebrations.

In the 1980s, DVRPC issued sweeping reports that forecast future transportation needs. Using predictive modeling, these reports demonstrated the economic importance of expanded public transit and highway facilities. Long-term projections were instrumental in the construction of new roads—I-476, I-95, US Route 422, NJ Route 55—which helped to accelerate growth in the region’s suburbs. It also called for new rail lines, including the Center City Commuter Connection, which finally linked all of Philadelphia’s major railroad stations when it was completed in 1984. DVRPC also began to encourage greater public participation, soliciting input from area citizens on its long-range plans. To formalize this process, it created the Regional Citizens Committee, which became an important—if sometimes contentious—forum for residents to comment on the DVRPC planning process.

After the appointment of executive director Barry Seymour in 2006, DVRPC tried to balance autocentric development with more progressive planning goals, including a focus on public transit and regional equity. As in previous years, suburban governments and developers resisted this shift towards urban-focused planning. Still, DVRPC’s efforts included a regional food system plan—the first by a metropolitan planning organization—that encouraged local stakeholders to improve food supply equity. It also invested in recreational facilities, including improved trail infrastructure for bicyclists and pedestrians. In 2011, DVRPC faced an internal controversy: It disbanded the long-standing Regional Citizens Committee (RCC) because of fierce infighting among its members. While it was replaced by the Public Participation Task Force, ex-members of the RCC lamented the commission’s alleged unwillingness to consider public input.

In 2013, DVRPC issued its latest long-range plan for the region, Connections 2040. It called for continued investment in transportation infrastructure despite funding shortfalls. As DVRPC approached its fiftieth anniversary, its long-range plan echoed the goals it had set forth at its founding: “creating livable communities, managing growth and protecting the environment, building the economy, and establishing a modern multimodal transportation system.”

Dylan Gottlieb is a Ph.D. candidate at Princeton University, where he works on recent American urban history. (Author information current at time of publication.) 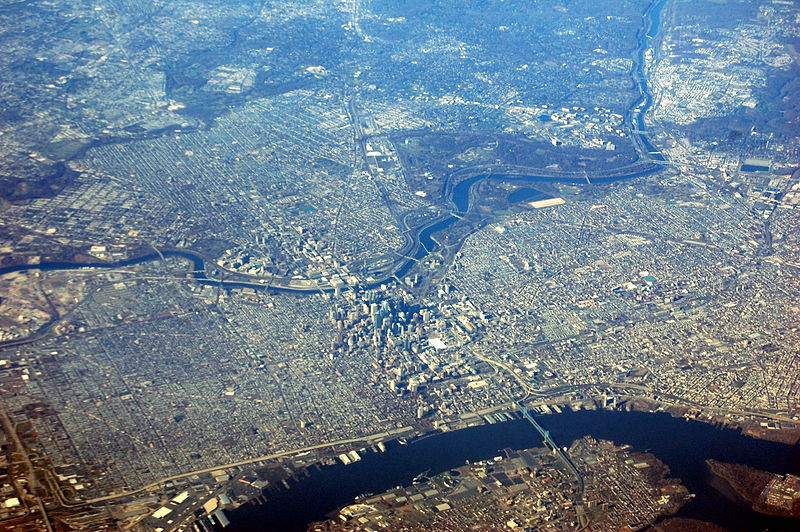 The Delaware Valley Regional Planning Commission was created to coordinate planning in a nine-county region, with Philadelphia at its epicenter. In this image, Philadelphia sprawls away from the high-rises of Center City. The Delaware River and Camden, New Jersey, are at bottom. In the lower left quadrant is South Philadelphia. Cutting across the middle is the Schuylkill River, with West Philadelphia at center left. In the upper right are Manayunk and Conshohocken. Across the top lie the suburbs of Montgomery and Delaware Counties. 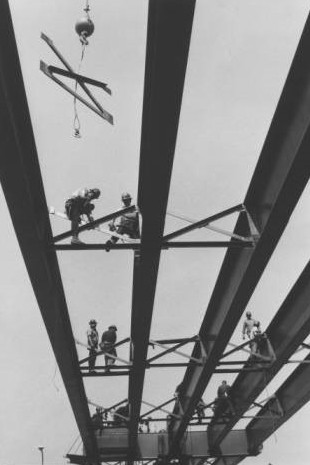 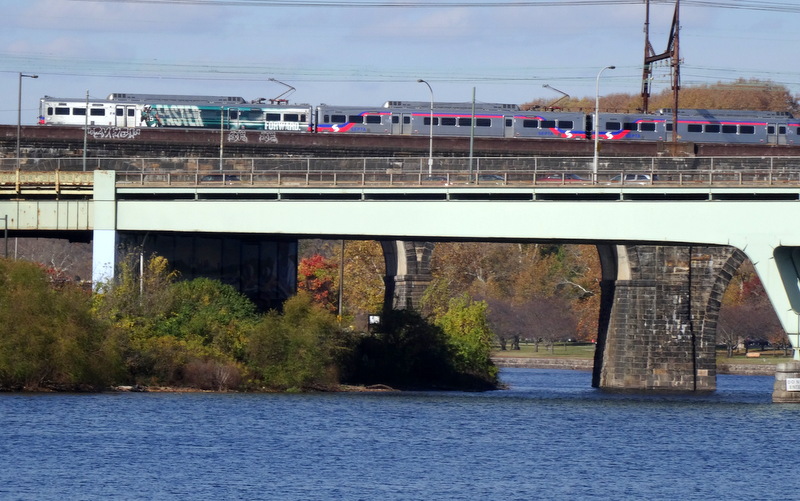 One of the primary goals of the Delaware Valley Regional Planning Commission is to understand how people commute throughout the region and how this travel impacts people and the environment. With this information, DVRPC can work to improve the flow of traffic and lessen its environmental impact in the region. One means of decreasing congestion and environmental pollution caused by automobile travel is to encourage the use of public transportation and make it a viable option for as many people in the region as possible. DVRPC uses its long-range projections to determine which areas would benefit the most from the introduction of subways and regional rail lines. (Photograph by Donald D. Groff for the Encyclopedia of Greater Philadelphia)

Dwight D. Eisenhower’s experience in the European theater of World War II convinced him of the need to centralize and update the nation’s systems of highways. He coordinated with Congress to gain passage of the 1956 Federal-Aid Highway Act, which provided $25 billion towards the building of new interstate highways and required the close cooperation of federal and state planners. This act began a chain of events that culminated in the formation of the Delaware Valley Regional Planning Commission, with its founding legislation being passed in 1965 and 1967 in Pennsylvania and New Jersey, respectively. 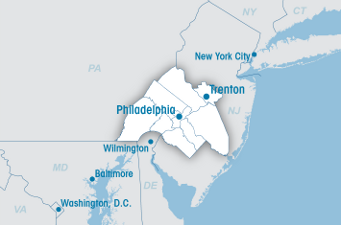 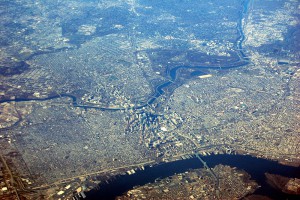 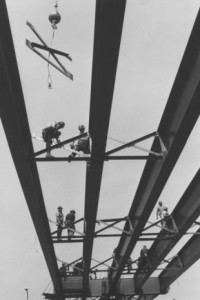 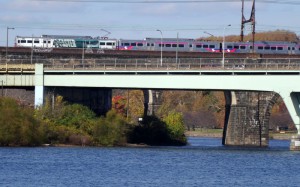 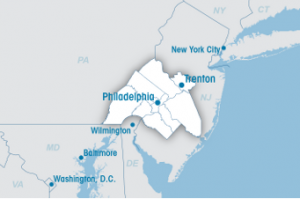