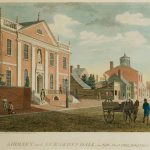 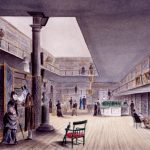 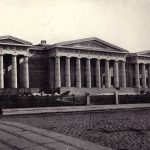 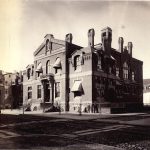 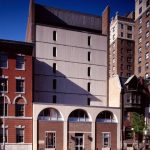 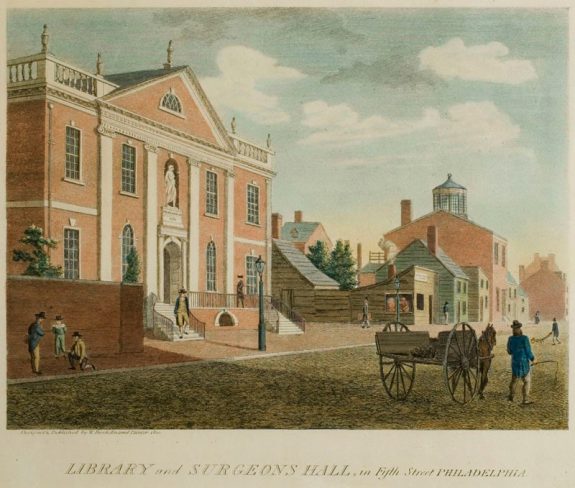 Amateur architect William Thornton’s 1789 first Library Company building occupied a site on Fifth Street facing the complex of government buildings on the State House (later Independence) Square. The library served as the de facto Library of Congress before the government moved to Washington, D.C. William Birch included the building in his series of Philadelphia views published in 1800. Thornton’s building was demolished in 1884. Its façade was re-created in the 1950s for a building to house the library of the American Philosophical Society. 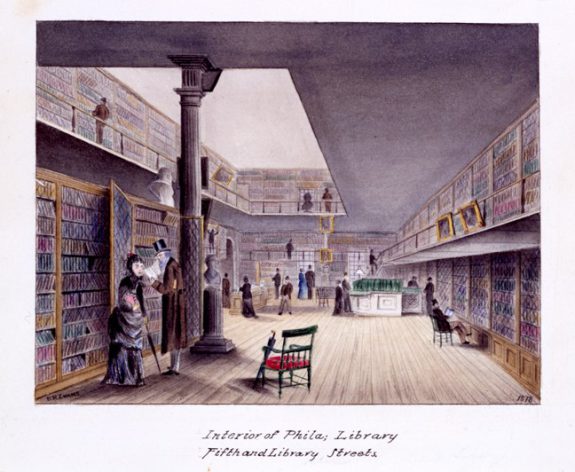 In 1792 the Loganian Library, a major legacy of James Logan largely focused on books on astronomy, mathematics, physics, linguistics, botany, history and the Greek and Latin classics, merged with the Library Company. By agreement and necessity based on the collection’s substantial size (2,600 volumes), library trustees added a dedicated wing extending its new building on Fifth Street. 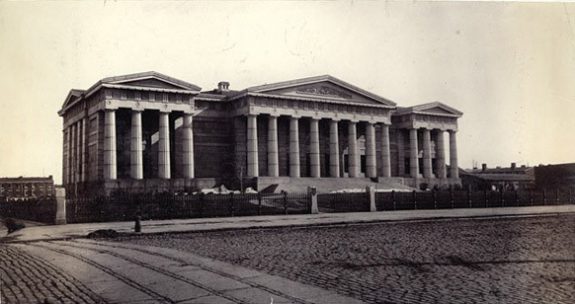 Addison Hutton’s Greek-Revival building for the Library Company, constructed between 1873 and 1878 at Broad and Christian Streets, was built with a million-dollar bequest of Dr. James Rush. The library moved to 1314 Locust Street in the mid-1960s and the City of Philadelphia bought the building, which became home to the Philadelphia High School for Creative and Performing Arts (CAPA). 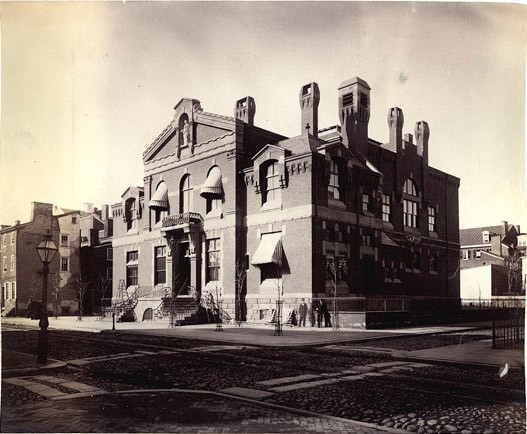 In 1879, architect Frank Furness submitted a design for a centrally-located library building at the northwest corner of Juniper and Locust Streets. Very much inspired by Thornton’s original building on Fifth Street, Furness updated the façade in his own style, providing a niche in the pediment for Francesco Lazzarini’s statue of Benjamin Franklin, the first piece of public art in the city. The building was demolished in 1940 and replaced by a parking garage. 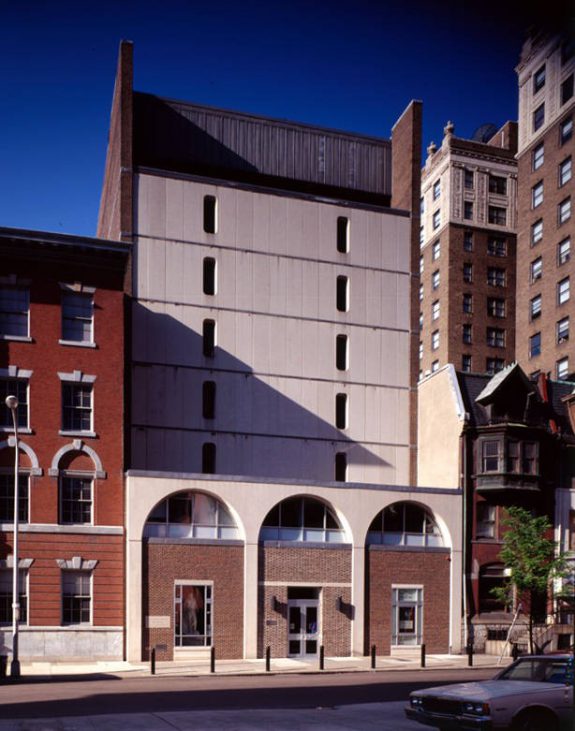 After fiscal fortunes declined in the Great Depression, the library consolidated its collections at the Ridgway Library on South Broad Street. Beginning in the 1950s, the library refocused its mission as a scholarly research library. In April 1966, a new, eight-story building designed by Carroll, Grisdale & Van Alen Architects opened to the public.

The institution supported forward thinking in the spirit of engaged inquiry—knowledge through experience. The first surviving catalog from 1741 lists 372 titles, “best sellers” from the first half of the eighteenth century. Shareholders tended to choose books they considered practical: science, history, or literature more than theology, theater, or classics in Greek, even though the library’s first directors envisioned Philadelphia as “the future Athens in America.” Acquisitions included do-it-yourself builder’s dictionaries and architectural style guides to help Philadelphians emulate London as rebuilt by Christopher Wren (1632–1723). The most expensive early purchase was the six-volume Historical and Critical Dictionary by French philosopher Pierre Bayle (1647–1706), known for its tolerant and rational perspective. By 1770, the library’s collections had expanded to 2,033 books, and the character remained similar, reflecting, as Librarian Edwin Wolf 2nd (1911–91) would much later describe it, “the basic character” of American colonial culture. 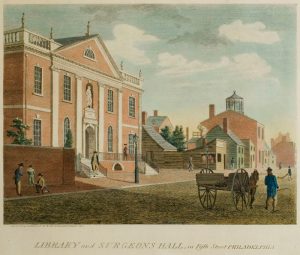 Throughout the eighteenth century, the library was itinerant, though always well-situated, occupying the west wing of the State House in 1740 and the second floor of Carpenters’ Hall by 1773, where it served as the library of the Continental Congress and of the Constitutional Convention. By the 1790s, with more than five hundred members (about a tenth of the city’s households), the library also played a part in the new federal government complex on the State House (later Independence) Square. In the first building of its own just south of Chestnut Street, at Fifth and Library Streets, the Library Company served as the de facto Library of Congress until the government moved to Washington, D.C., in 1800. 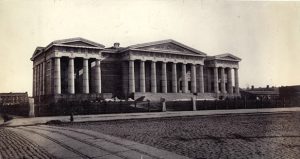 The Library Company’s Ridgway Building, which later became the Philadelphia High School for Creative and Performing Arts, was funded by a million dollar bequest of Dr. James Rush. (Library Company of Philadelphia)

Over the next several decades, the collections outgrew the original building. In 1869, a bequest of books and cash from Dr. James Rush (1786–1869), son of Dr. Benjamin Rush (1746–1813), enabled a much-needed new library. In his will, Rush called for a Center City location, but in a subsequent codicil he left the location to the discretion of his executor. Hoping to keep the Library Company from evolving into a typical urban public library, Rush’s bequest banned “every-day novels, mind-tainting reviews, controversial politics,” and daily newspapers. Library directors had little choice but to accept the quirky terms and out-of-the-way location, accepting a new Greek Revival temple at Broad and Christian Streets (later the Philadelphia High School for Creative and Performing Arts). To maintain a presence in Center City, library directors commissioned architect Frank Furness (1839–1912) to design another building eight blocks to the north at Juniper and Locust Streets. 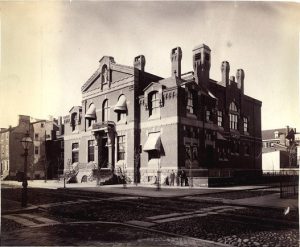 After the Free Library of Philadelphia was chartered in 1891, the Library Company’s public role faded further and its purpose grew marginal. The Great Depression diminished the endowment, and during World War II the library briefly operated as a branch of the Free Library. By the middle of the twentieth century, it had become clear, as Librarian James N. Green (b. 1947) later wrote, “a new raison d’etre had to be found, or the library would cease to exist.” 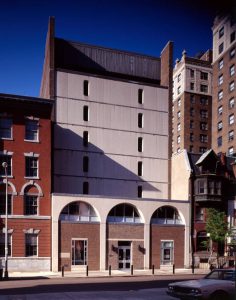 As the library refocused its mission into a scholarly research resource, it also moved to a new location at Thirteenth and Locust Streets. (Library Company of Philadelphia)

The Library Company’s collections continued to grow into one of the best in the nation to study early American intellectual history, enabling new ways of seeing the past. By 1969, with a broad and growing interest in African American history, Edwin Wolf decided to make that an institutional priority. A groundbreaking exhibition, Negro History: 1553–1903, was followed by a printed bibliography with 16,500 entries that became a classic reference. Ongoing acquisitions in African American history added thousands more books and graphics, transforming an interest area into one of the library’s strongest single subject areas. Over time, the library applied the same interpretive focus and collecting technique to the history of women, U.S. education, philanthropy, agriculture, and natural history, as well as Philadelphia prints and photographs and other areas of interest to researchers.

Kenneth Finkel, professor (teaching/instructional) in American studies and public history at Temple University, served as curator of Prints and Photographs at the Library Company from 1977 to 1994. He is a regular contributor at the PhillyHistory blog.

Wolf, Edwin, “Franklin and His Friends Choose Their Books.” Pennsylvania Magazine of History and Biography 80 (1956): 11–36.

Wolf, Edwin, “The First Books and Printed Catalogues of the Library Company of Philadelphia.” Pennsylvania Magazine of History and Biography 78 (1954): 45–70.