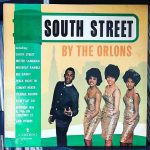 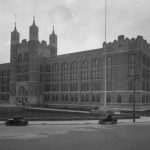 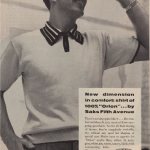 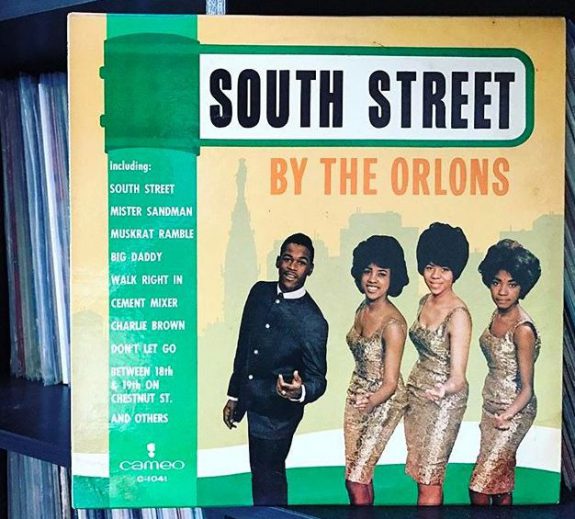 The album cover for “South Street” made its Philadelphia associations clear with the depiction of the city’s distinctive skyline in the background of the Orlons quartet: Stephen Caldwell, Shirley Brickley, Marlena Davis, and Rosetta Hightower. Also on the album cover is the logo of Philadelphia-based Cameo Parkway Records, where the Orlons also recorded their earlier hits “Wah-Watusi” and “Don’t Hang Up.” While “South Street” helped to make a Philadelphia thoroughfare famous, local listeners also could find hometown references in the lesser-known song saluting another Philadelphia location: “Between 18th and 19th on Chestnut Street.” 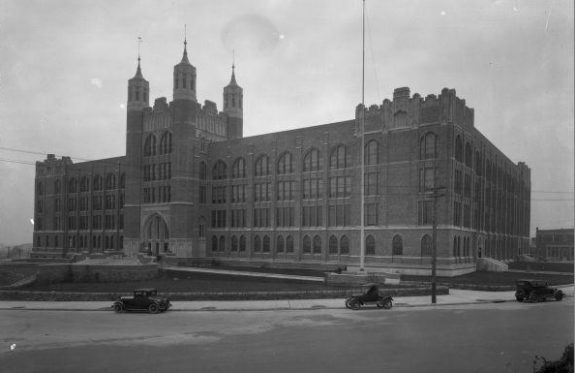 The Orlons formed at Overbrook High School in West Philadelphia in the 1950s. The school at Fifty-Ninth Street and Lancaster Avenue, which became known as “The Castle on the Hill,” is shown here in 1926, two years after its construction. The school was designed by Irwin T. Catherine, the chief architect of Philadelphia public schools from 1920 until 1937. It was added to the National Register of Historic Places in 1986.

In addition to the Orlons, Overbrook High School’s famous alumni include Wilt Chamberlin, inducted into the Naismith Basketball Hall of Fame in 1979, and actor/musician Will Smith. 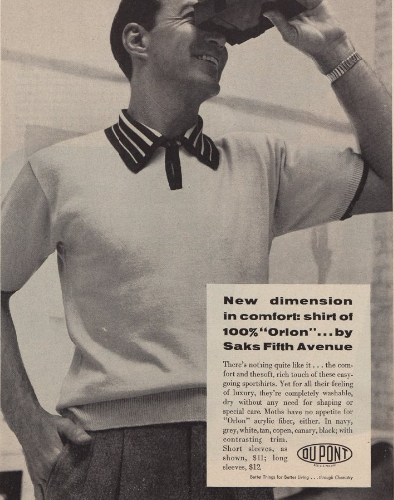 The Orlons took their name from the fabric of one of Stephen Caldwell’s sweaters—the DuPont product, Orlon. DuPont created and trademarked the first acrylic fibers in 1941 using the name Orlon. Orlon fabric was promoted as a stable, resistant to shrinkage, soft, and warm alternative to cotton and other natural fibers. The idea of using a fabric for the group name came from another West Philadelphia vocal group with which the Orlons sometimes traded gigs, the Cashmeres.

This 1954 advertisement by Saks Fifth Avenues for Orlon clothing states: “There’s nothing quite like it … the comfort and the soft, rich touch of these easygoing sportshirts. Yet for all their feeling of luxury, they’re completely washable. Dry without any need for shaping or special care. Moths have no appetite for “Orlon” acrylic fiber, either. In navy, grey, white, tan, copen, canary, black; with contrasting trim.”

“South Street,” a hit song for the Philadelphia vocal group the Orlons in 1963, celebrates an iconic Philadelphia thoroughfare and is among a select group of songs that came to define the city in popular culture in the late twentieth century. The song’s catchy opening line—“Where do all the hippies meet? South Street, South Street”—became a well-known refrain for generations of Philadelphians. 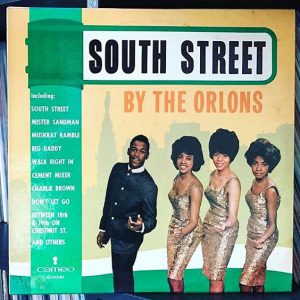 “South Street” featured a snappy mid-tempo dance beat and with a short but rocking saxophone solo in the middle. (Photograph provided by Charles J. Cizek)

“South Street” reached number three on the pop music charts in April 1963 and brought national attention to a street whose history as a lively Philadelphia entertainment and commercial corridor dates to the mid-eighteenth century. South Street formed the southern boundary of the city of Philadelphia until 1854. Beginning in the 1750s theaters were established on the southern side of South Street, immediately outside the city limits and beyond the legal reach of conservative city officials and Quaker leaders who viewed theater as an immoral activity.

In the first decade of the nineteenth century, African Americans began to concentrate in the area around Sixth and South Streets, creating Philadelphia’s largest predominantly black neighborhood. Mother Bethel African Methodist Episcopal Church, established in 1794 one block to the north at Sixth and Lombard, drew many of Philadelphia’s free blacks to settle in the area. As the city’s African American population grew in the nineteenth and early twentieth centuries, fueled in large part by the Great Migration of southern blacks to cities of the North, the African American community extended westward beyond Broad Street to the Schuylkill River. All along South Street east and west of Broad were black restaurants, theaters, clubs, and businesses. At the same time, the eastern section of South Street became home to other ethnic groups, including Irish, Italians, Poles, and Jews, many of whom arrived as poor unskilled immigrants in the late nineteenth and early twentieth centuries and found employment and cheap housing in the area.

The South Street that the Orlons sang about in 1963 as “the hippest street in town” represented another phase in the street’s long and colorful history. The emergence of South Street as a countercultural center in the 1960s was an indirect result of government plans announced in the 1950s to build a crosstown expressway along the South Street corridor that would link the I-95 and Schuylkill expressways. With the demolition of much of South Street imminent in the late 1950s and early 1960s, property values declined significantly and the area became a low-rent haven for bohemians and artists. A lively counterculture took shape along South Street, while a group of local residents and business owners actively fought the expressway plans. Their efforts were ultimately successful, and South Street survived as a funky urban thoroughfare populated by artists, musicians, hipsters, and the businesses and arts organizations that served them. It was the early stages of this culture that the Orlons celebrated in their 1963 song. The word “hippie” featured so prominently in the song was then just beginning to come into common usage. “South Street” may in fact be the first song in which the word was ever used. At the time, “hippie” referred not to the long-haired free spirits of the late 1960s, but to their precursors, the beatniks and hipsters of the 1950s and early 1960s. 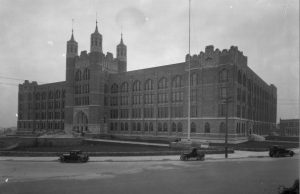 The Orlons were not the only famous alumni from Overbrook High School—others included Wilt Chamberlin, inducted into the Naismith Basketball Hall of Fame in 1979, and actor/musician Will Smith. (PhillyHistory.org)

The Orlons were an African American vocal group that formed at Overbrook High School in West Philadelphia in the 1950s. The group went through various personnel changes over the years but during its early 1960s heyday it was a quartet consisting of singers Stephen Caldwell (b. 1942), Shirley Brickley (1944–77), Marlena Davis (1944–93), and Rosetta Hightower (1944–2014). The group took its name from the fabric of one of Stephen Caldwell’s sweaters—the Dupont product, Orlon. The idea of using a fabric for the group name came from another West Philadelphia vocal group with which the Orlons sometimes traded gigs, the Cashmeres. The Cashmeres later became the Dovells and had several hits with the Philadelphia record label Cameo Parkway Records beginning in 1961.

At the suggestion of Dovells lead singer Len Barry (real name Leonard Borisoff, b. 1943), the Orlons auditioned for Cameo Parkway and eventually got a record deal with the company. After two unsuccessful releases, the Orlons hit big with “Wah-Watusi” and “Don’t Hang Up,” which in 1962 reached numbers two and four, respectively, on the Billboard Top 100 charts. “South Street,” released in early 1963, entered the charts in February and remained there for thirteen weeks, peaking at number three for two weeks in April. Two other Orlons songs—“Not Me” and “Crossfire”— reached the Top 20 in 1963, but that was the end of the group’s recording success. Personal issues and changing musical tastes in the mid-1960s led to the Orlons’ decline. The group disbanded in the late 1960s (although some members reunited and began performing as the Orlons again in the 1980s).

“South Street” was written by songwriter Kal Mann (real name Kalman Cohen, 1917–2001) and guitarist, arranger, and producer Dave Appell (1922–2014), two of the main architects of the very successful Cameo Parkway sound of the late 1950s and early 1960s. Along with company founder, pianist and record producer Bernie Lowe (real name Bernard Lowenthal, 1917–93), they were responsible for a long string of hits in this period. Cameo Parkway’s success was helped in no small part by Lowe’s close friendship with Dick Clark (1929–2012), host of the enormously popular Philadelphia teen music and dance TV show American Bandstand, which broadcast nationally from Philadelphia from 1957 to 1964. Clark regularly showcased Cameo Parkway artists such as the Orlons on his program.

“South Street” featured a snappy mid-tempo dance beat and a rather simple small combo musical arrangement, with a short but rocking saxophone solo in the middle. It is the vocals that make the song: the tight female harmonies, set off by Hightower’s soaring lead vocal, Caldwell’s “frog voice” deep bass interjections, and occasional shout-outs from Brickley and Davis. A lively, engaging tune, “South Street” was a longtime favorite at area dances and took its place as a key song in the Philadelphia pop music canon.

Musso, Anthony M. Setting the Record Straight: The Music and Careers of Recording Artists from the 1950s and early 1960s . . . in Their Own Words, Volume 2. Bloomington, Ind.: AuthorHouse, 2009.