“The Twist,” an early 1960s dance hit by Philadelphia singer Chubby Checker (real name Ernest Evans, b. 1941), ushered in a new way of dancing and solidified Philadelphia’s role as a major trendsetter in popular music in this period. Released in the summer of 1960 by Philadelphia-based Cameo Parkway Records, “The Twist” reached number one on the pop music charts on two separate occasions, in 1960 and 1962, the only non-holiday song ever to do so.

Checker’s recording of “The Twist” was a cover of the original by Hank Ballard and the Midnighters. Ballard (real name John Henry Kendricks, 1927–2003) had enjoyed success on the rhythm and blues charts in the 1950s, particularly with songs with risqué lyrics. His version of “The Twist,” recorded in late 1959, was gaining popularity in 1960, but Dick Clark (1929–2012), host of the popular and influential teen music and dance TV show American Bandstand, broadcast nationally from Philadelphia, considered it too suggestive for mainstream audiences. At Clark’s urging, Cameo Parkway recorded its own version of “The Twist” with nineteen-year-old Chubby Checker on vocals. While both Ballard and Checker were African American, the tastemakers at American Bandstand and Cameo Parkway considered Checker—young, cheerful, and wholesome looking—more palatable for a broader audience than Ballard.

Dance tunes with the word “twist” in the title or whose lyrics described a twisting dance motion (often as a sexual double entendre) began to appear in early twentieth-century African American popular music and blues and were fairly common by midcentury. It was standard practice in Black music of this period for bits of melodies and lyrics with origins in the African American vernacular tradition to circulate among performers and to find their way into different songs. With no known creator, record companies often gave writing credit to the artist who that first put these musical elements on record.

Such was the case with “The Twist.” While Hank Ballard is credited as the songwriter, the song’s origins are in gospel and rhythm and blues. Gospel singer and guitarist Joseph “Jo Jo” Wallace (b. 1926) had the original idea for a song with the lyrics “Come on baby, let’s do the twist” based on a dance he remembered his sister doing as a child in his native North Carolina. Wallace was a member of the Sensational Nightingales, one of several popular gospel groups based in Philadelphia in the mid-twentieth century whose members had migrated from the South. Wallace and another member of the group, Bill Woodruff (Willie George Woodruff, c. 1929–95), developed the song, but they did not consider it appropriate for their gospel group, and in the mid-1950s they began shopping it to rhythm and blues artists. One was Philadelphia singer Little Joe Cook (1922–2014) of Little Joe & The Thrillers. Cook made a demo recording of “The Twist,” but his record company opted not to record it. Sometime around 1957, the Sensational Nightingales offered the song to Hank Ballard and the Midnighters while both groups were staying at the same hotel in Tampa, Florida. Ballard and guitarist Cal Green (1937–2004) rearranged the song into a twelve-bar blues and the group recorded it in November 1959 for their record label, King Records, based in Cincinnati, Ohio.

Accounts vary as to how “The Twist” first came to the attention of Dick Clark, but sometime in early 1960 he told his friend, Cameo Parkway owner Bernie Lowe (real name Bernard Lowenthal, 1917–93), that Ballard’s record was catching on and he needed a less suggestive version to play on TV. Cameo Parkway chose to do a cover by Ernest Evans, an aspiring South Philadelphia singer known for his talent for impersonating other vocalists. Previously, in late 1958, when Clark had asked Cameo Parkway to make a singing Christmas card that he could send out as a holiday greeting, the company had Evans record impersonations of popular artists singing “Jingle Bells.” It was during rehearsals for this Christmas record that Ernest Evans became “Chubby Checker.” Dick Clark’s wife, Barbara (b. 1930), heard Evans, who was a bit pudgy at the time, mimicking singer and pianist Antoine “Fats” Domino (b. 1928) and, in a play on “Fats Domino,” she christened him “Chubby Checker.” Cameo Parkway followed up Checker’s 1958 singing Christmas greeting by having him record “The Class,” a novelty record in which he mimicked various rock and roll artists singing “Mary Had a Little Lamb.” “The Class” was a minor hit in 1959 and paved the way for Checker’s cover of “The Twist.”

Chubby Checker’s version of “The Twist,” recorded in June or July 1960, was almost an exact copy musically of Hank Ballard’s, but with heavy promotion by Cameo Parkway and Dick Clark, both hit-making machines in this period, it became a smash hit. Dick Clark had two national TV shows at this time: American Bandstand, his daily weekday show from Philadelphia, and The Dick Clark Show, a Saturday night program broadcast from New York City. Clark began playing Checker’s version of “The Twist” on American Bandstand in the summer of 1960 and then had Checker appear in person on The Dick Clark Show on August 6, 1960, to lip-synch and dance to it. The record went to number one on the pop charts that September and spawned a craze that forever changed the way people danced.

Prior to “The Twist,” most dancing was done by couples who executed their steps while holding one another as partners. “The Twist” fundamentally changed this, ushering in a new “open” type of dancing in which people danced apart, not touching. “The Twist” became a huge dance craze in the early 1960s, cutting across generational and class lines, practiced by teenagers and adults, from the working class to the social elite. Other record companies cashed in by putting out their own twist records, and Chubby Checker had follow-up top ten hits for Cameo Parkway with “Let’s Twist Again” in 1961 and “Slow Twistin’” in 1962, the latter a duet with singer Dee Dee Sharp (real name Dione LaRue, b. 1945). In between these hits, his original 1960 recording of “The Twist” shot back up to number one in January 1962. “The Twist” also launched Cameo Parkway’s period as a national trendsetter in teen dance music, with dance hits such as “Mashed Potato Time,” “The “Watsui,” “The Bristol Stomp,” and many others in the early 1960s. By this time “The Twist” had entered the mainstream, becoming part of American popular culture and a longtime staple at dances, weddings, and parties.

Jack McCarthy is a music historian who regularly writes, lectures, and gives walking tours on Philadelphia music history. A certified archivist, he recently directed a major project for the Historical Society of Pennsylvania focusing on the archival collections of the region’s many small historical repositories. Jack serves as consulting archivist for the Philadelphia Orchestra and the Mann Music Center and worked on the 2014 radio documentary Going Black: The Legacy of Philly Soul Radio. He gave several presentations and helped produce the Historical Society of Pennsylvania’s 2016 Philadelphia music series, “Memories & Melodies.” (Author information current at time of publication.) 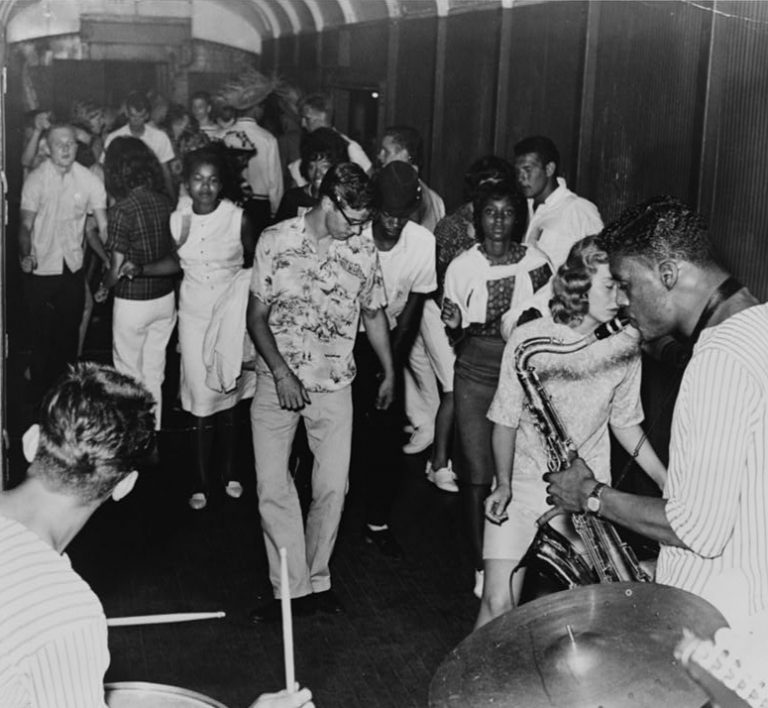 Teenagers Do "The Twist"

Before “The Twist,” most dancing was done by couples who held each other as partners while they danced. "The Twist" ushered in a new type of dancing in which people did not touch while executing steps. The high school students in this 1962 photograph are doing "The Twist" in the baggage car of a train. 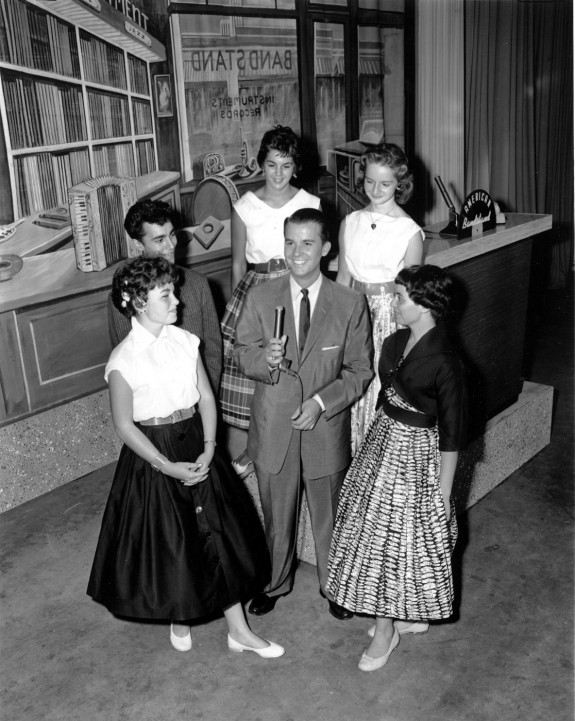 Chubby Checker’s recording of “The Twist” was popularized by Dick Clark, who promoted the song on his popular television shows, American Bandstand and The Dick Clark Show. It was Clark who suggested that Cameo Parkway record a new version of the song, which led to Checker’s hit version. 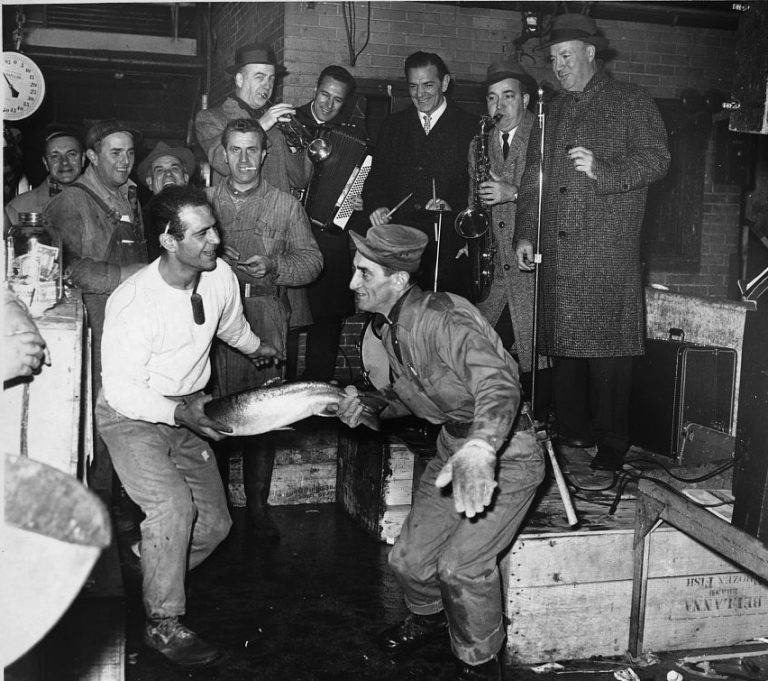 Twisting with a Fish

“The Twist” was a dance craze that transcended age and class lines. This 1962 photograph shows fish mongers dancing "The Twist" to entertain customers at the Fulton Fish Market in New York City. 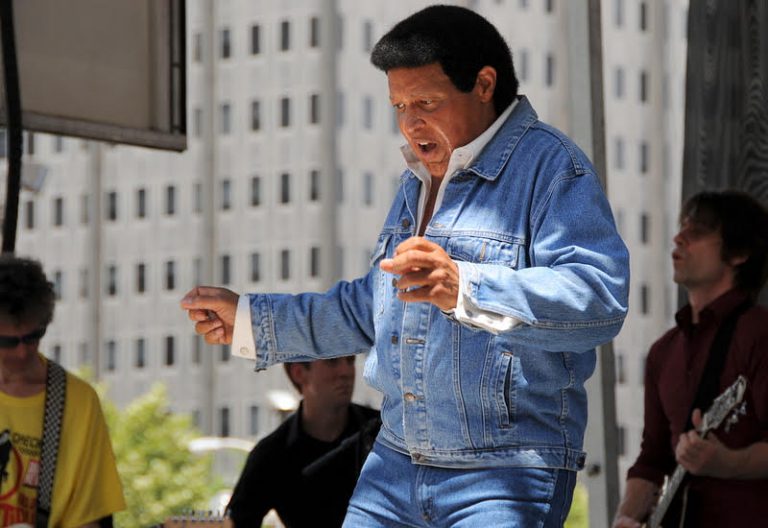 Chubby Checker does "The Twist" on July 9, 2010, outside Philadelphia City Hall, where the singer helped celebrate the fiftieth anniversary of the dance.
(Photograph by Donald D. Groff for The Encyclopedia of Greater Philadelphia) 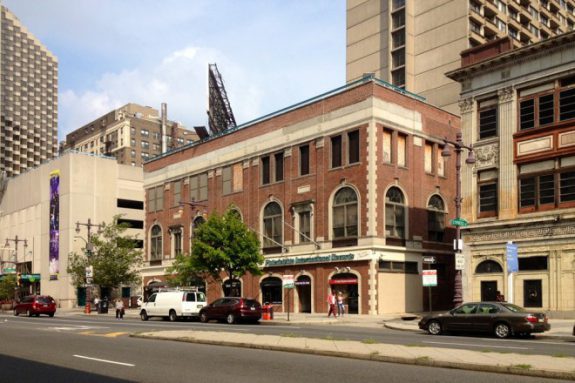 “The Twist” was recorded by Chubby Checker for Cameo Parkway Records. The company was founded as Cameo Records in 1956 by Bernie Lowe and Frank Mann and joined by the subsidiary Parkway Records in 1958. Both labels operated out of this headquarters on South Broad Street. “The Twist” was Parkway’s first major single and started a dance craze across the nation. While both labels found success in the 1960s with hits by Checker, Bobby Rydell, and others, it was not enough to keep them solvent. In 1967, Cameo Parkway was sold and moved to New York under the name Abkco Records. The Cameo-Parkway building was later occupied by another local record label, Kenneth Gamble and Leon Huff’s Philadelphia International Records, which was founded in 1971. The building was demolished in 2016. 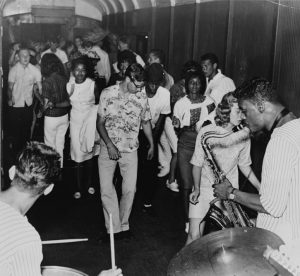 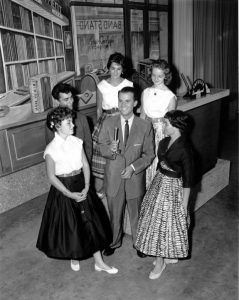 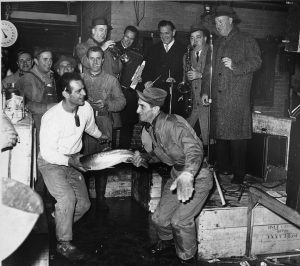 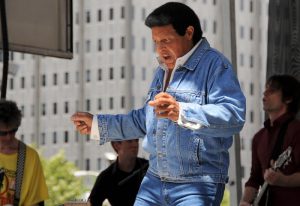 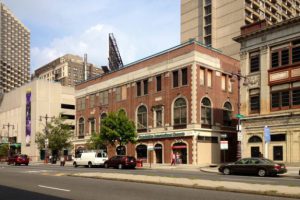 Dawson, Jim. The Twist: The Story of the Song and Dance That Changed the World. Boston: Faber & Faber, 1995.